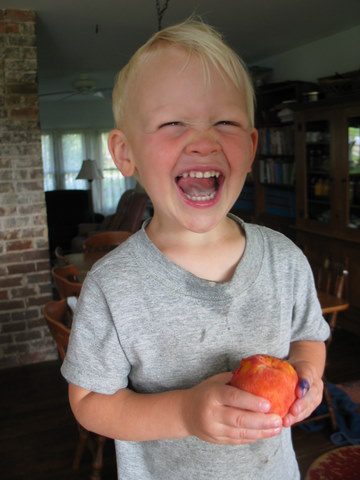 The Baby Nickel is still nursing.

Apparently he’s pretty thrilled about that.

I’ll give you a second to scoop your chin up off the floor and regroup. (If you have trouble regrouping, as in you aren’t able to comprehend how anyone could nurse a child past the age of one and it makes you angry just to think about it because, good grief, that would just ruin a child and it’s all about the mother being weak and needy anyway, then, well, I’m sorry.)

Yes, he’s a strapping two year old, 30½ months to be exact. Yes, he talks, sometimes while nursing. Yes, he eats solids. And yes, he has bitten me (hard, even drew blood, but I was, breathe in, strong, breathe out) though it was not intentional (he kindly, worriedly, suggested, “Mama put band-aid on ouchie?”).

I never nursed any of my children this long. By this point I was always either pregnant or already nursing a wrinkled, red-faced, squawking infant (aw, shucks, I kind of miss that—stop that, hormones!) and so I’ve never had the chance (and no, I did not have any desire to tandem nurse since I can only handle one child sucking the life out of me at a time) to nurse a child this long. The Baby Nickel is my seca leche, my milk drier-upper, my last child. I’m savoring his babyness. While most of the time I’m jumping up and down with glee over the thought of no diaper bags, no diapers, no sippy cups, no kid in my bed, and no green-and-white plastic booster seat at the table, part of me is a bit melancholy. You know, the sun is setting on that time of my life and all that jazz.

Just for the record, Yo-Yo Boy was weaned at 16 months, Miss Becca Boo at 25 months, and Sweetsie at 18 months. Those are rough guesstimates.

What do I love so much about this nursing a young child thing? I love it that when I tell him it’s time for milk he drops everything and starts running towards me, grinning, smacking his lips, panting in excitement. I lift him up and he wraps his arms around my neck, squeezing tight. I love it that at the same time he is becoming fiercely independent, he still needs me in this special, tangible way. Totally precious.

I love it how he stops nursing and pulls off the breast to join in the conversation. For example, last night we were all lounging around downstairs. I was perched on a stool, nursing, when I detected that someone had let fly a stinky. I demanded, “Who farted?” and The Baby Nickel promptly pulled off the breast and declared, “I did!” I ignored him and persisted in asking around. The Baby Nickel kept saying, “I did! I did!” I finally looked at him and asked, “Did you fart?” He grinned and said, “Yeah, I faht”, and went back to nursing, immensely pleased with himself.

In the morning I always fix my coffee before sitting down to nurse him. The other morning The Baby Nickel got out all my coffee stuff. I told him that I already had my coffee and pointed to my travel mug that was sitting on the kitchen counter. He pointed to my coffee cup and demanded, “Drink your coffee. I want milk!” So that’s what he was getting at when he pulled out my coffee fixings—he was trying to hurry me along so we could get down to the important business.

I don’t know how much longer I’ll be nursing my baby (I can assure you he’ll be weaned by the time he goes to college). We skip nursings here and there. Mr. Handsome often puts him down to sleep at night, and some mornings are rushed and we never get around to snuggling together. I’m trying to get my mom and dad to take all four kids for a 24 hour period (to be in my house with no children for an entire day will be pure bliss). So it’s winding down, this nursing thing, and life is moving on.

But it sure is sweet while it lasts.