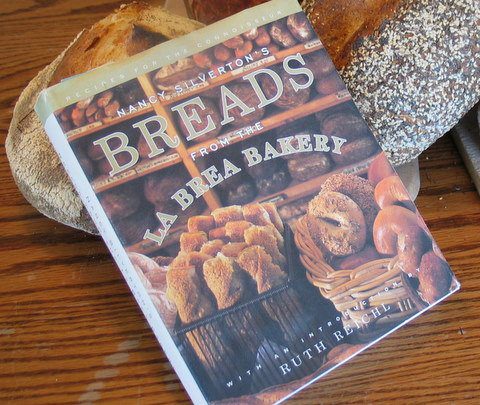 No, I’m not pregnant, and no, I’m not going to be pregnant (better not, anyway). I’m talking about something totally different: my bread baby.

Maybe I should start at the beginning.

Back when Mr. Handsome and I got married, our friends, David and Tina, gave us a cookbook, Nancy Silverton’s Breads From La Brea Bakery.

I skimmed through it, but it appeared way too intimidating, so I put it on my shelf and there it sat for nearly a decade. Then, in the late fall of 2006 when I was swollen with the lump that was to become The Baby Nickel, I decided to give the book a shot.

That meant that I had to make my own sourdough starter from flour, water, and grapes. It took twenty-one days untill the starter was strong enough to use in bread making. Once it reached a steady strength, I had to maintain it by feeding it three times a day, morning, noon, and night. Thus the reason I called it My Bread Baby.

I had been baking bread with the starter for only several weeks when The Baby Nickel was born. His was a home birth and my goal was to push him out during the night and by morning be up and about, cooking food and feeding my bread baby as well as my human baby. Basically, I wanted to be Super Woman. (There are women who do that, you know. They’re up and about making waffles for the midwives. Or so I’ve heard.)

That wasn’t the way things turned, however. (Do I hear you laughing at me? That’s not nice!)

I ended up in the hospital for 24 hours (hang that placenta), but I wrote down the instructions for feeding the other baby, and my mother came through for me. Two and a half weeks later I ended up in the hospital again, this time for four days (darn that blood poisoning), and once again my mother, husband, and whoever was running the house at the moment, picked up the slack.

When I got home, my bread baby was none the worse for wear, and I was much better (thanks to two blood transfusions and some powerful antibiotics), so I picked up where I left off, feeding two babies now, instead of one. 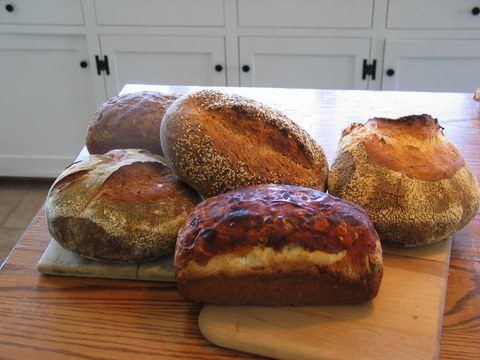 I thought I would never be able to make authentic sourdough bread, you know, the artisan/European kind, because I didn’t have the right oven, not to mention the right training. But Silverton’s book was fantastic, teaching me step by step, all the details, the science. I was turning out bread, just with flour, sea salt, and water, that had a hard crust, chewy inside, good hole structure. (Mr. Handsome loved to act all important by picking up a loaf he had just cut into, putting his nose up close to it, scrutinizing the inside and then declaring, “Ah, look at that hole structure.”) I felt like a magician—powerful, amazing, superhuman. It helped to take away the sting of not being able to serve waffles to the midwives.

It took two days to turn out a batch (two loaves) of bread because the bread had to do an overnight proof in the fridge. I bought a digital thermometer so I could read the exact temperature of the dough. I learned to make rye starter and whole wheat starter (so yes, then I had three bread babies to feed). I learned to knead the bread with a special slam-dunk-slap that was satisfyingly loud and quite therapeutic, and then I learned to knead it in Mr. Handsome’s Grandfather’s Kitchen Aid mixer, which was annoyingly loud, but quite relaxing.

Country White, Chocolate-Sour Cherry, Raisin Brioche, Fig-Anise, Pumpkin, Whole-Wheat, George’s Seeded Sour, Red Pepper-Scallion, Rosemary-Olive Oil, Potato-Dill, Whole-Wheat Sandwich, Pumpernickel, Multigrain, Izzy’s New York Rye, Parmesan Cheese, Sesame-Semolina, Rustic, Focaccia, Italian Ring, Baguette—these are the breads that I made. From the leftover starter I made dog biscuits and sourdough pancakes and waffles. We feasted on bread. Hot from the oven, the crust would shatter under the knife, and we’d spread it thickly with butter which would then melt and drip through the holes onto our hands and trickle down our wrists.

I was nursing a big fat baby, so I could do things like that.

I think it was around that time that I started to call myself The Kitchen Goddess. Privately, of course. My self-esteem had never been higher (I don’t know if that’s really true, but it could be).

So now our grapes are ripe and need to be picked soon. (I’m going to make the starter from our homegrown grapes this year—this bread baby is going all-natural!) The urge to conceive is getting pretty strong.