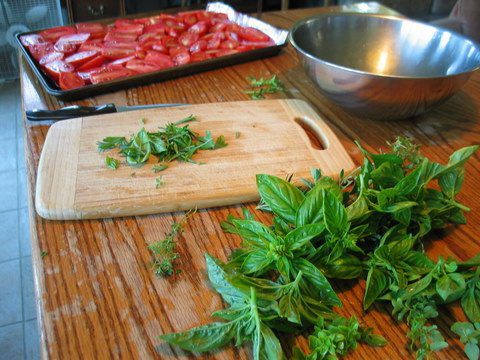 Last year I discovered a new way to preserve Roma tomatoes: roasted, in the oven. I’m sure that all of you have access to Romas, either from your garden, your neighbor’s garden, or the Farmers’ Market. My point is, you need to go buy some and then make these tomatoes.

I am not sure what is the best, most efficient way to do these tomatoes—I’m still experimenting. So I’m just going to tell you about the several different methods I have employed. The recipe and method are flexible, so you’ll have to play around with the ingredients yourself. My point is, pretty much anything you try will be fine.

But whether or not you make these tomatoes is non-negotiable. That’s my main point.

Oven-Roasted Roma Tomatoes
I think this is adapted from Barbara Kingsolver’s book, Animal, Vegetable, Miracle, but I’m sadly too lazy to go look it up and double check on that. You ought to read the book anyway. Let me know if you find the recipe there, okay? 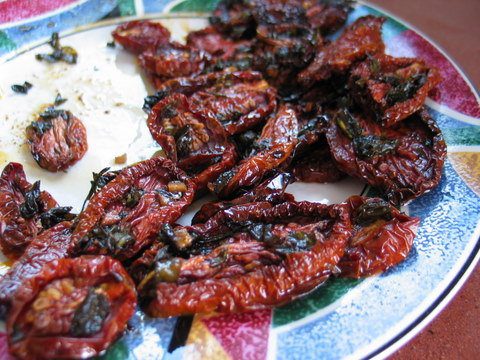 Wash the tomatoes, cut the tops off, and slice them in half, lengthwise. Lay them skin side down on a large cookie sheet that has sides and that has been lined with tinfoil. To make this whole process worthwhile, you’re going to want to fill your oven with as many trays of tomatoes as will fit on your racks, and lay the tomatoes as close together as is possible without them laying on top of each other. They will shrink to about half their original size. I do two big trays at a time, though I would do more if I had more racks for my oven. (Mr. Handsome, can you please help me out here? Find me another two racks?)

Now, there are different methods for the next part. Here’s three of them. Pick one, or create a new one.

Method #1
In a small bowl, mix together the chopped herbs, garlic, olive oil, red wine, salt, and pepper. Using your fingers, distribute the herb mixture over the tomatoes, making sure that each tomato has received a little dollop of green goodness and juice. 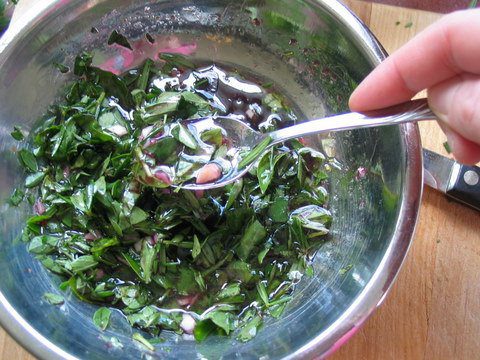 Method #2
Sprinkle the chopped herbs over the tomatoes. Then the chopped garlic, the salt, and the pepper. Drizzle the olive oil over all, followed by a couple splashes of wine.

Method #3
Put the prepared tomatoes in a large bowl. Add the olive oil, wine, and garlic and gently toss to coat. Lay the tomatoes out on the trays. Sprinkle the chopped herbs over all.

Another idea, which may become Method #4 in the near future
Prepare them as in method #3, but use herbes de Provence in place of fresh herbs, as in the Tomato Bread Pudding recipe that nearly slayed me.

Last night I lighted on the best way to roast these tomatoes. See, they take a long time in the oven and during the day I often run into trouble because I want to bake granola or bread or potatoes or something and the tomatoes are in there, hogging up all the space. Also, I’ve been roasting them a little too quickly and they’ve been too caramelized (okay, Mom, burned) while at the same time still being a bit too juicy. So last night I turned the oven to 225 degrees right before I went to bed (around 9:30 pm) and they roasted all night long. I could smell them when I got up to go to the bathroom, and that made me smile to myself because I was being productive even while I was sleeping. I checked on them at around 6:15, and only about six halves were too heavily caramelized—the rest were just fine, and about half of them were not quite done. Tonight I’ll set the oven to just 200 degrees.

Pull the tomatoes off the trays, one by one, as they finish roasting, and lay them on a dinner plate. When they are all off the trays and have cooled to room temperature, put them in a quart jar, label it “Roasted Romas ‘08″, and put them in your freezer. 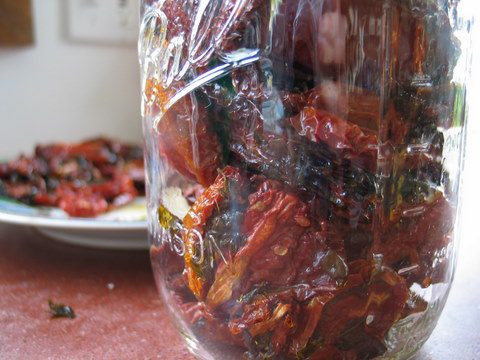 These tomatoes are fabulous in grilled cheese sandwiches, or any kind of sandwich for that matter. They taste rich and warm and darkly tomato-y. Chop them up and add them to pasta dishes, pesto, salads, dips, dressings, and so forth. They will disappear pretty fast, so you better run your oven every night for the rest of the month of August if you plan to have enough to make it through the winter.