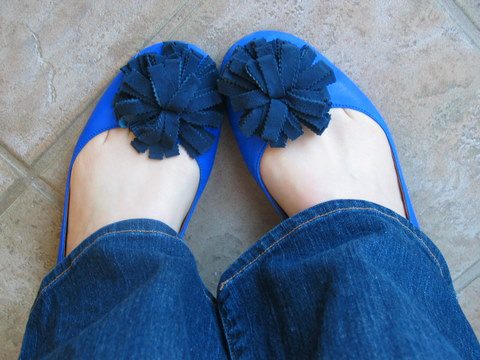 My mother thinks I’m weird because I bought gruyere cheese and love it. She claims it tastes like dirty socks. My daughter says it smells like cow poop. I think it smells strong and tastes marvelous. Sorry fam, I can’t help it that I’m more cultured than ya’ll.

My husband, Mr. Handsome, thinks I’m weird because I’ve worn these blue shoes to church. Actually, he was mortified. I think he thought I was going to hell for wearing them to church. However, the sermon was on hell, and I don’t think I’ll be going there, besides I’m pretty sure it doesn’t exist, so I just told him to shut his yakking pie hole and be glad that he married a self-confident woman.

Yo-Yo Boy thinks I’m weird, and unreasonable, because I won’t let him wear his flashing sneakers that G-mommy just bought him to church on Sunday. My reason, that we don’t wear flashing shoes to church, didn’t calm him down at all. I’m glad he’s too young to point out my ironies.

Mr. Handsome thinks I’m weird because I’ll nurse my hulking two year old in public. Probably a lot of other people think I’m weird, too. But I don’t really care, though I have exercised some caution as of late, because he’s my baby, my seca leche (translation: milk-drier-upper), and it’s so stinkin’ much fun to nurse a talking kid.

A lot of people think I’m weird because I keep my loud, argumentative, active children at home with me, under the pretext of teaching them. I kind of think I’m weird about that, too…

The general population thinks I’m weird (I mean, they would, if they all had the privilege of knowing me) because I abhor TV and won’t allow it in my house.

I could go on and on. Maybe I will. In another post.