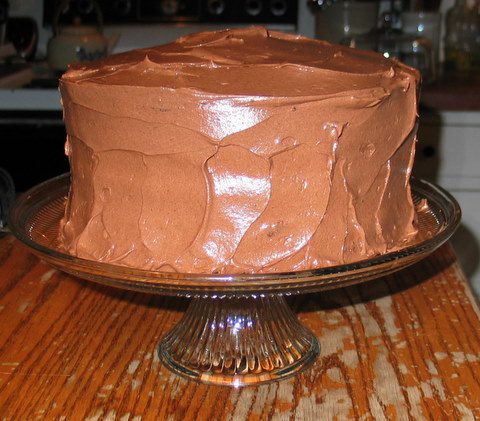 I can be rather grandiose at times. I mean, I like things large. Flamboyant. Especially if it involves sugar and fat and chocolate.

Several years ago I made a chocolate cake for a family gathering at my house, and also in honor of one of my cousins who was having a birthday, though the real reason was the gathering. I don’t remember all the baking details, but what I do remember was that it was a four layer monstrosity with mint green frosting between the layers and chocolate icing on the sides and top. I chopped up Andes mint candy and sprinkled them all over the top. It was a towering confection. When I went to cut it, the handle of the cut-co knife disappeared into the cake and I had to use my bread knife (I think I’m remembering correctly).

The other day I made this cake.

I got the recipe from a Gourmet magazine, and it’s called Mile-High Chocolate Cake. The contents of the icing are almost unprintable, but I’ll try. The icing includes a cup of sugar, some flour, cocoa powder and unsweetened cocoa, milk, vanilla, and the main ingredient which is—um—butter. Six sticks of it. For real. I know it’s obscene and completely unnecessary and inappropriate. But I had never made an icing recipe calling for that much butter and I figured that I could probably learn something from it: either the recipe sucked, or it was fantastic and I’d been missing out on good chocolate icing my entire life.

And then we ate it and it was okay. Good actually. But definitely not fantastic. And definitely not worth all those calories. I cut the cake up in chunks, piled four large pieces on a plate and delivered them to a friend and wrapped the rest of them in plastic wrap and stuck them in the freezer. Every now and then I pull a chunk out and cut it into slivers and serve it. The last time I pulled out a hunk, I gussied it up with strawberries from the garden and whipped cream and served it to some girlfriends. I didn’t tell them (well, one of them anyway, since the other one had been the receiver of the plate of cake slices) what was in it till their plates were scraped clean.

I think I have one more hefty slice of chocolate butter in the freezer. Want to come over? I’ll make you coffee to go with it.