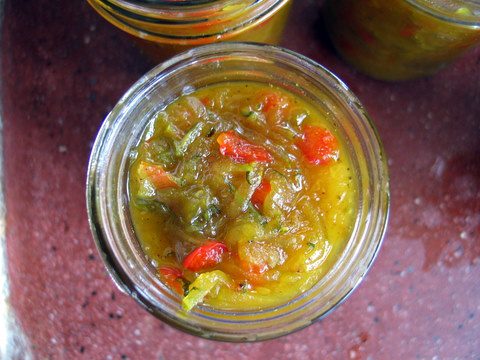 We are in the middle of zucchini season. In case you didn’t know, zucchini season has three stages. The first stage is marked by obsessively checking on the zucchini plants, followed by squeals of delight when the first zucchini is ready to be picked, hoarding of said first zucchini and the next five or six glossy-skinned precious babes as they trickle in from the garden, and a flurry of favorite zucchini recipes.

You know you are in stage two of zucchini season when your refrigerator crispers—both of them—are loaded with the small to medium-sized green clubs (no longer thought of as “precious babes”), you’re spending extended periods of time chopping the vegetables to get them ready for the canner or freezer, and you’re perusing the web and flipping through cookbooks in search of variations on the zucchini theme.

Stage three is the stage that usually comes to mind when people think of zucchini: country church parking lots full of locked cars, zucchinis the size of small baseball bats that get heaved over the fence to the farm animals, and unabashed relief when the bore worms attack the plants and they suddenly collapse in a yellow-brown heap of stinky foliage. Then, finally, we all heave a great sigh of relief and thank our lucky stars that zucchini season is over for another year.

Right now we are in stage two. I have zucchinis in the crisper, a bag of zucchinis, a gift from my sister-in-law, on the counter (I accepted a gift of zucchini, a sign that we have definitely not reached stage three), and more just-picked zucchinis on another counter. Oh, and there’s one other zucchini on top of the bowl of fresh green beans—a hidden one that I found when watering the plants. (I was watering the zucchini plants—more proof that we’re not yet in stage three.)

What do I do with my zucchinis? I shared the first ones with my mother, and while it was hard, I knew I had to do it—I’ve got to be a good daughter and take care of my mother dearest, you know. I can only hope that I raise up my daughters as well as my mother did me. (How’s that for masked self-adulation?) I’ve made zucchini skillet and I’m preparing to make a big pot of zucchini-sausage-brown rice soup that I’ll (bless my poor nervous soul) pressure can. But, upon assembling my first decent collection of zucchinis, I promptly made a batch of zucchini relish.

Zucchini relish is like pickle relish but with zucchini (obviously) in place of the cucumbers. My friend Amber gave me the recipe a couple years ago and I loved the stuff, especially on hot dogs. In fact, I can hardly bear to eat a hot dog without it. We had just finished up the last of the relish (I only suffered through one or two hot dog meals without it) when the zucchinis made their welcomed entrance.

I searched through my files for my recipe but had to call up Amber when I couldn’t find it. However, her mother Ann answered the phone instead (Amber was out frolicking at some beach, Ann reported), and it was Ann who helpfully paged through Amber’s recipe collection while I waited.

“Hm, ketchup, salsa… I must be getting close,” Ann mumbled to herself, and then, “Okay, here it is!”

She ran through the list of ingredients, explaining the procedure as she went, elaborating on the tricky spots (“make sure to stir it the whole time because it does have a tendency to stick to the bottom and burn”). I asked her where the recipe came from and she told me that back when they had a roadside vegetable stand (I was just a baby then) a customer, a woman from Middleton, told Ann about her fabulous zucchini relish recipe and then upon Ann’s request, gave her the recipe. 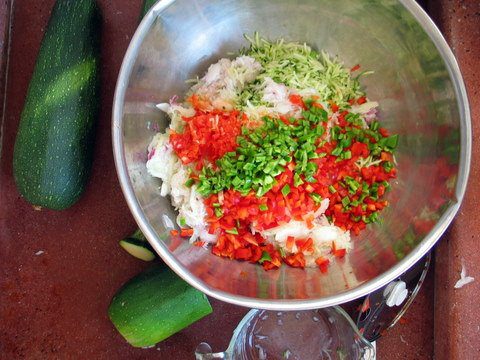 “It is good stuff,” I said to Ann. “I like it even better than pickle relish.” 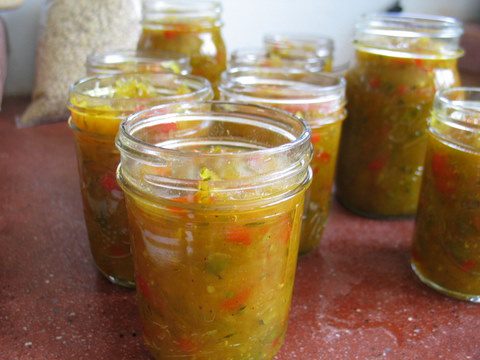 Zucchini Relish
From Amber, by way of her mother Ann who, in turn, got it from the customer from Middleton.

If using the large, boat-sized zucchini for this recipe, remove the seeds first; otherwise, if the zucchinis are small, use the whole thing.

I shredded my zucchinis and onions in the food processor. I tried to shred my peppers in the same manner, but the processor merely mangled them. Therefore, I tell you to chop the peppers, and it’s really not that big a deal, chopping three measly peppers.

Day One, in the evening:
Toss the first four ingredients together in a large bowl and sprinkle the salt over top. Stir to combine. Cover the bowl with a cloth and let it sit at room temperature over night.

Day Two, in the morning:
Drain the vegetables, rinse them well (I put them in a bowl and swished them around in some water), and drain again.

Put the vegetables and the remaining ingredients in a large, heavy-bottomed kettle. Stir them well and bring them to a full boil, stirring constantly. Reduce the heat and simmer for another ten to fifteen minutes, stirring steadily.

To hot pack the relish, put the hot relish into clean canning jars and seal with rings and lids. Allow the jars to cool at room temperature; once cool, check the tops to make sure they have properly sealed before removing the rings, wiping off the jars, labeling them, and transferring them to storage. (Or, if you want to can them in a hot water bath, put the relish-filled jars in the canner, cover them with water, and bring the water to a boil and process for five to ten minutes.)

One Year Ago: Red Beet Salad with Caramelized Onions and Feta (only read this if you’re in the mood for some old-fashioned aerobic exercise).