Several weeks back, our church’s weekly email had an announcement about a group of people who were planning to walk from Charlottesville, Virginia to Washington D.C. in a faith pilgrimage of race reckoning, resolve, and love. The core walkers — clergy, people of faith, and organizers from Vote Common Good, Red Letter Christians, Faith in Action, and some other organizations — would be walking the whole nine days, and day walkers were welcome.

The three younger kids and I signed up to walk for the first day.

I had no idea what to expect. Would we feel like outsiders? Would it be weird? Would we hate it? Maybe. But the march was relatively close to home and outside — a perfect with-people-but-not Covid activity. Plus, it was free, and it was only for one day.

If nothing else, at least we’d get some exercise.

So Thursday morning we drove over the mountain to Charlottesville where we joined a small group of people gathering on the steps of a church facing Emancipation Park. Organizers took our
temperatures and told us to grab a t-shirt. Leaders gave instructions and made speeches, and then we set off on a little learning tour of the city.

The church’s pastor shared what it had been like in during the Unite the Right Rally in 2017 when white supremacists had flooded the city with guns, hatred, and violence. Ahead of time, the church had tried to erect a boundary around the church to create a safe space, but the flood of Nazis (the speaker’s term) was so great that they had to bring out tables from the church and flip them sideways to create a barrier. Then, when the white supremacist drove his car through the crowd just a couple blocks over, the church’s parking lot transformed into a makeshift triage: children stripping their chemical-saturated clothes, EMTs tending to the bloodied and battered bodies, and community members surrounding the church to create a wall of protection between the victims and the white supremacists.

From there we walked to the site where Heather Heyer was murdered. We placed flowers along the wall and wrote chalk messages on the wall, sidewalk, and road. 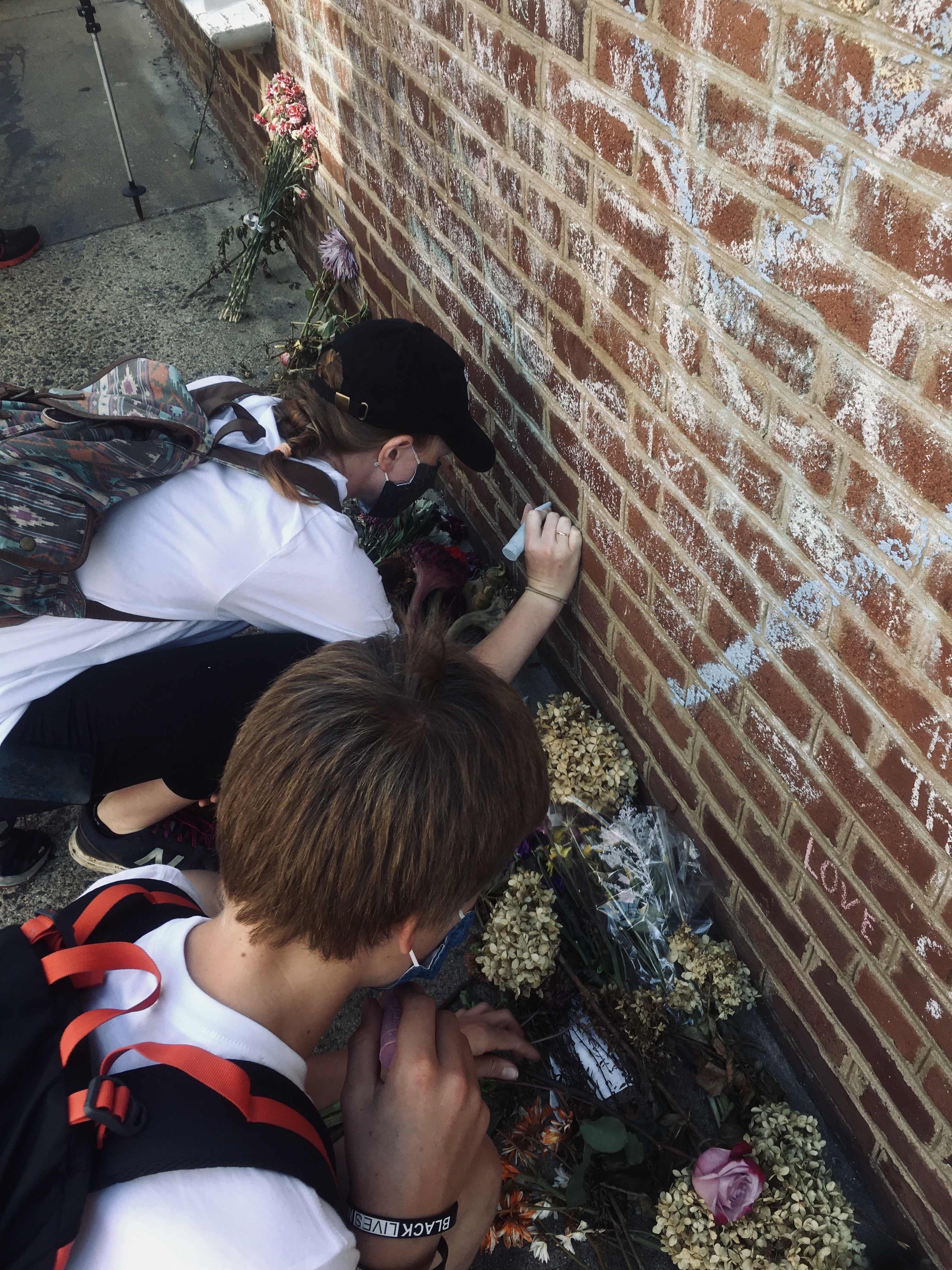 A man who’d been there told us the story of what had happened, how the day had almost reached its end without serious trauma when, as a group of counterprotesters (the protesters, in this case, were the white supremacists) walked up the street, a car appeared at the top, revved its engines and then tore into the crowd. 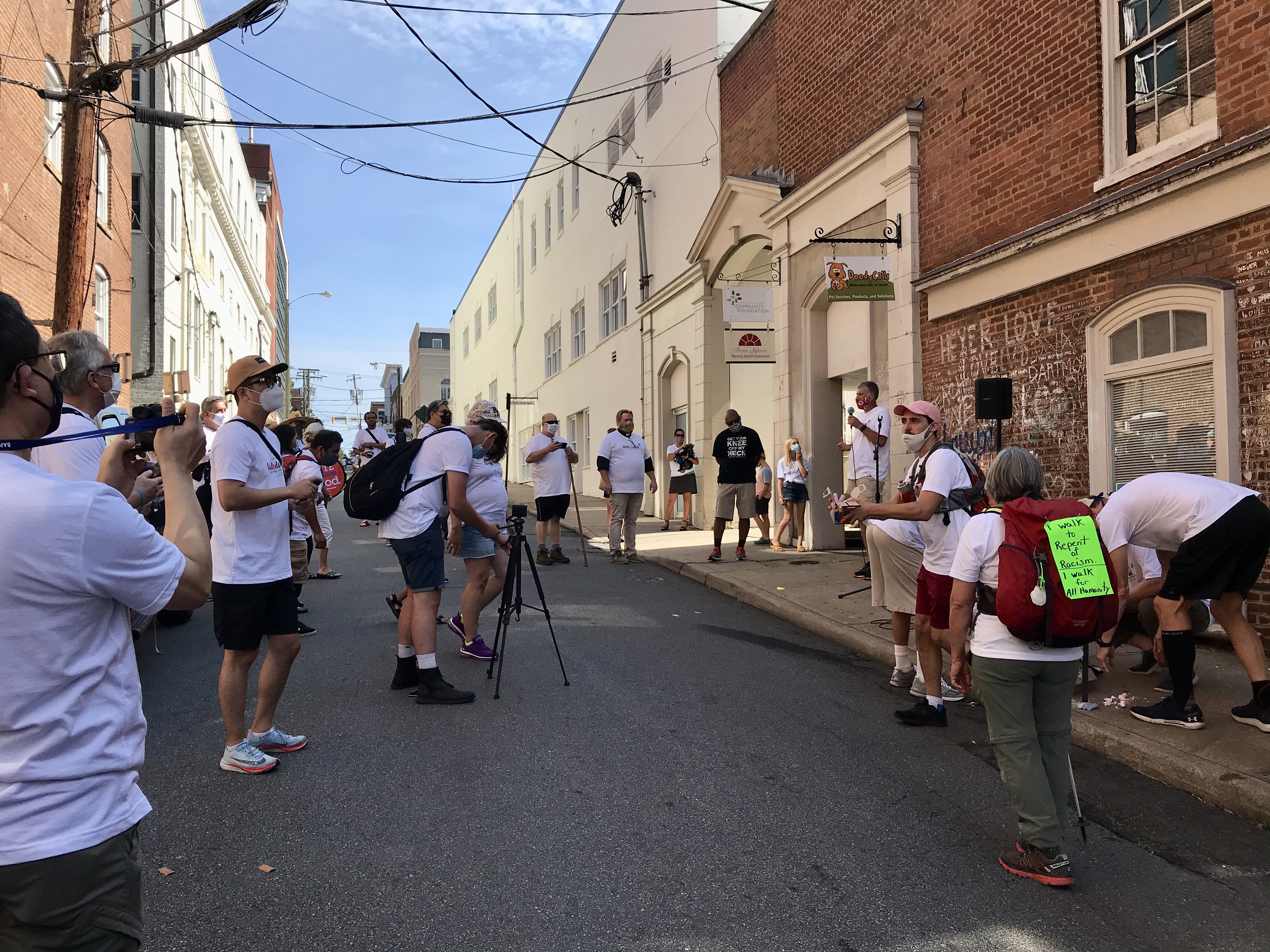 It was like a bomb went off, the man said. Bodies heaped up. Blood everywhere. He watched as the EMTs worked to bring the life back into Heather’s body, and failed. Even now, he said, it’s hard to be here on this street. 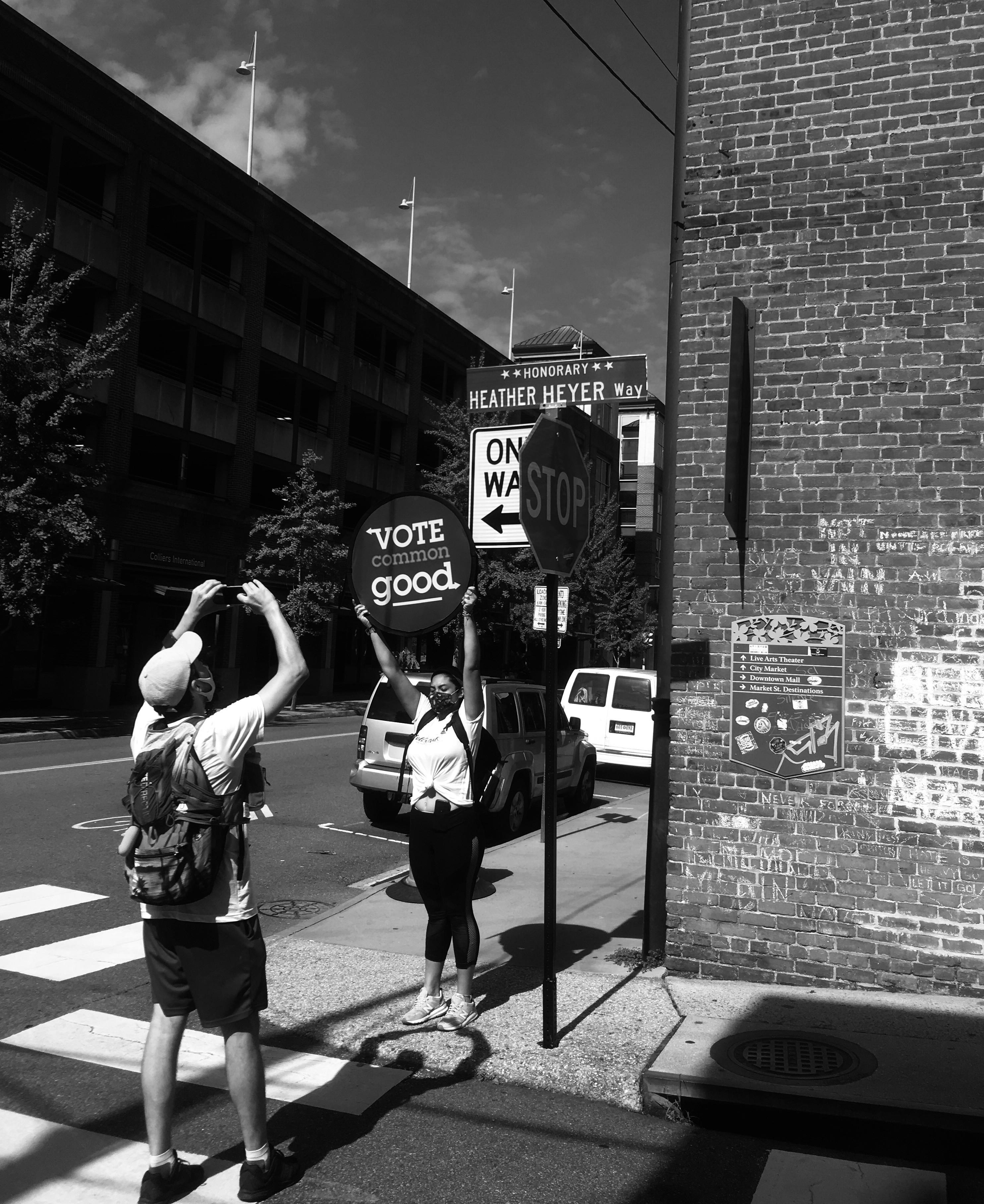 Then we walked the couple blocks up to the courthouse where we were greeted by a statue of a Confederate soldier casually holding a rifle and flanked by two cannons, a pile of cannon balls on the ground at his feet.

Just around the corner from that statue, we gathered at the racial terror lynching memorial that, a project of the Equal Justice Initiative, was errected just last year for John Henry James who was murdered in 1898: a mob of 150 white men stopped the train he was on, and then hung him and shot him, leaving his body to hang for hours while “hundreds more white people streamed by, cutting off pieces of his clothing, body, and the locust tree to take away as souvenirs.” 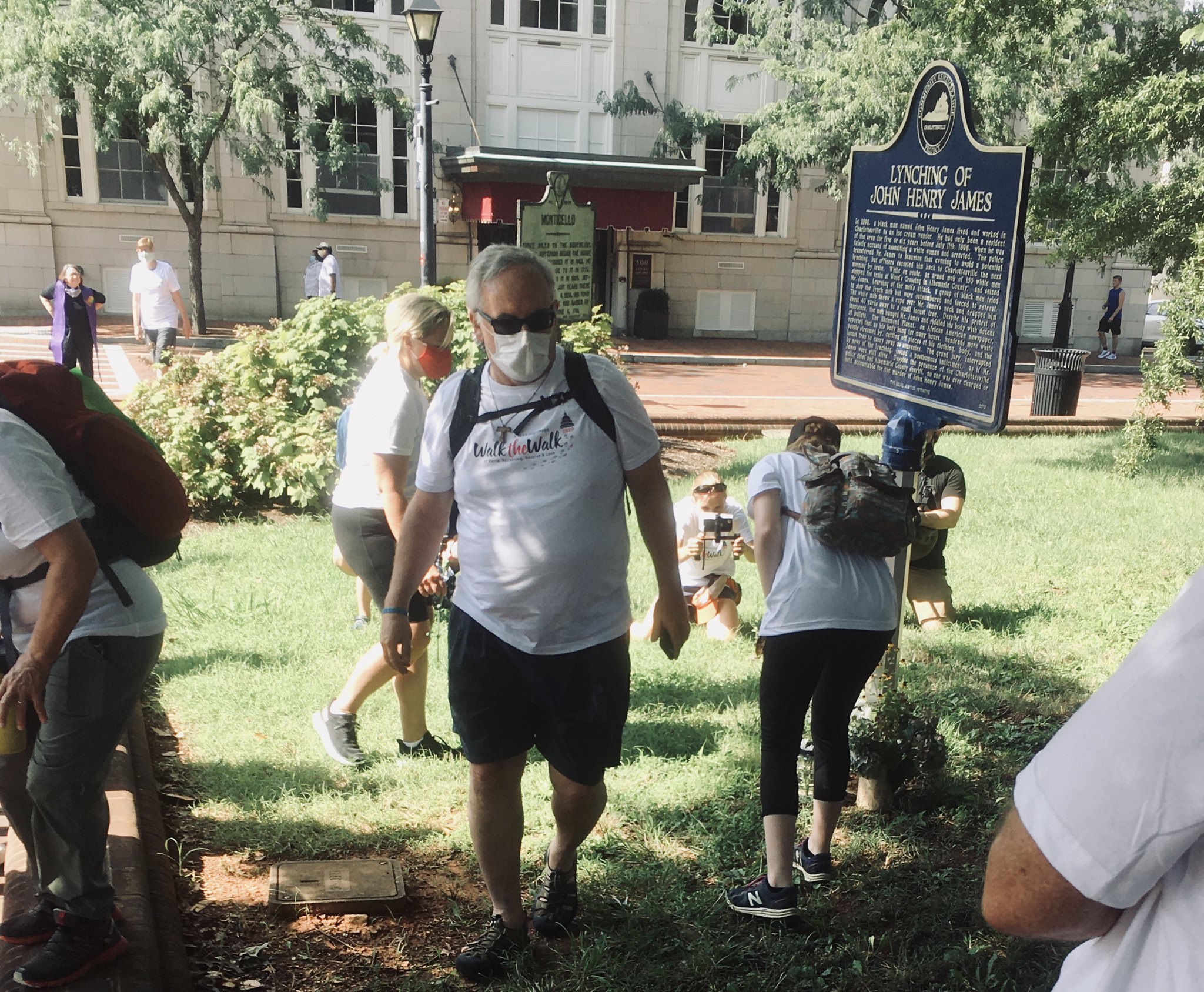 Soil from the lynching site is now archived at the EJI museum.

Opposite the street was a human auction block memorial. 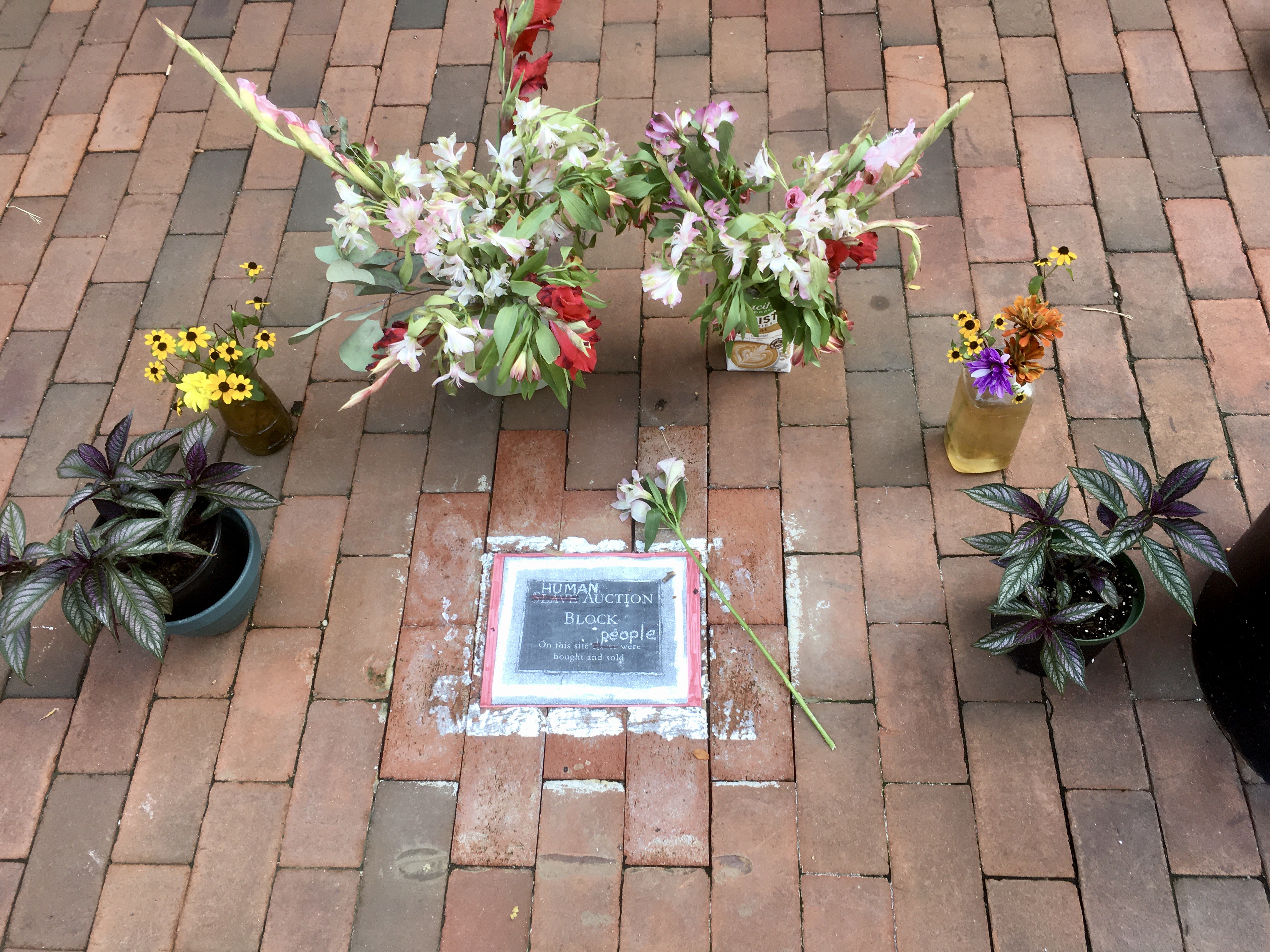 “Notice how we are forced to look up to see the statue of the Confederate soldier,” our guide said, “but in order to see the auction block memorial, one must stoop to read it. In fact, if you’re not looking for it, you might walk directly over it, missing it entirely.”

The tour over, we struck off out of Charlottesville and up 29N, our police escort — five vehicles! four motorcycles! — blocking off the right lane of traffic for us. 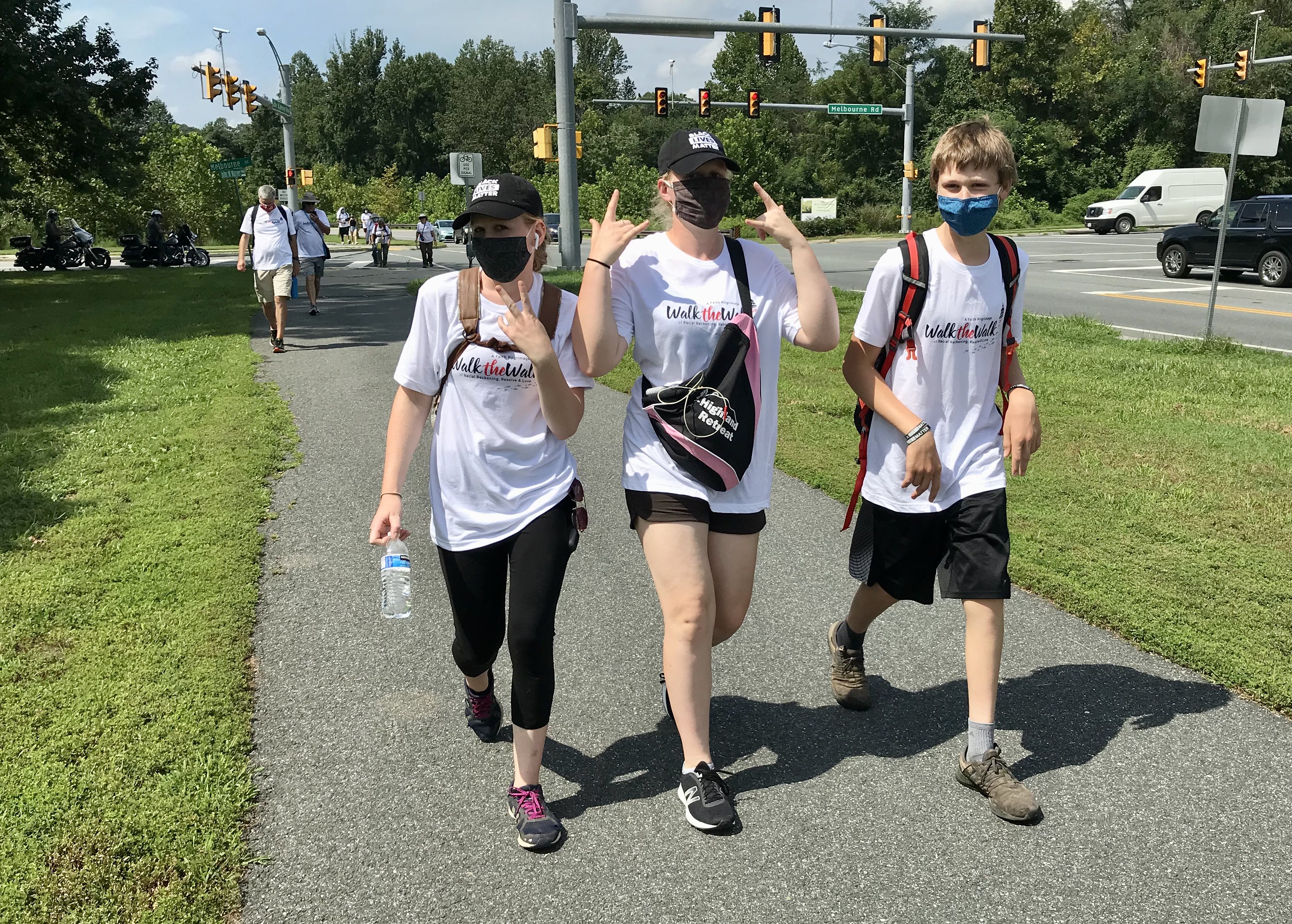 When my husband heard that we’d be walking on the highway, he said dryly, “The drivers sure are going to love you.” 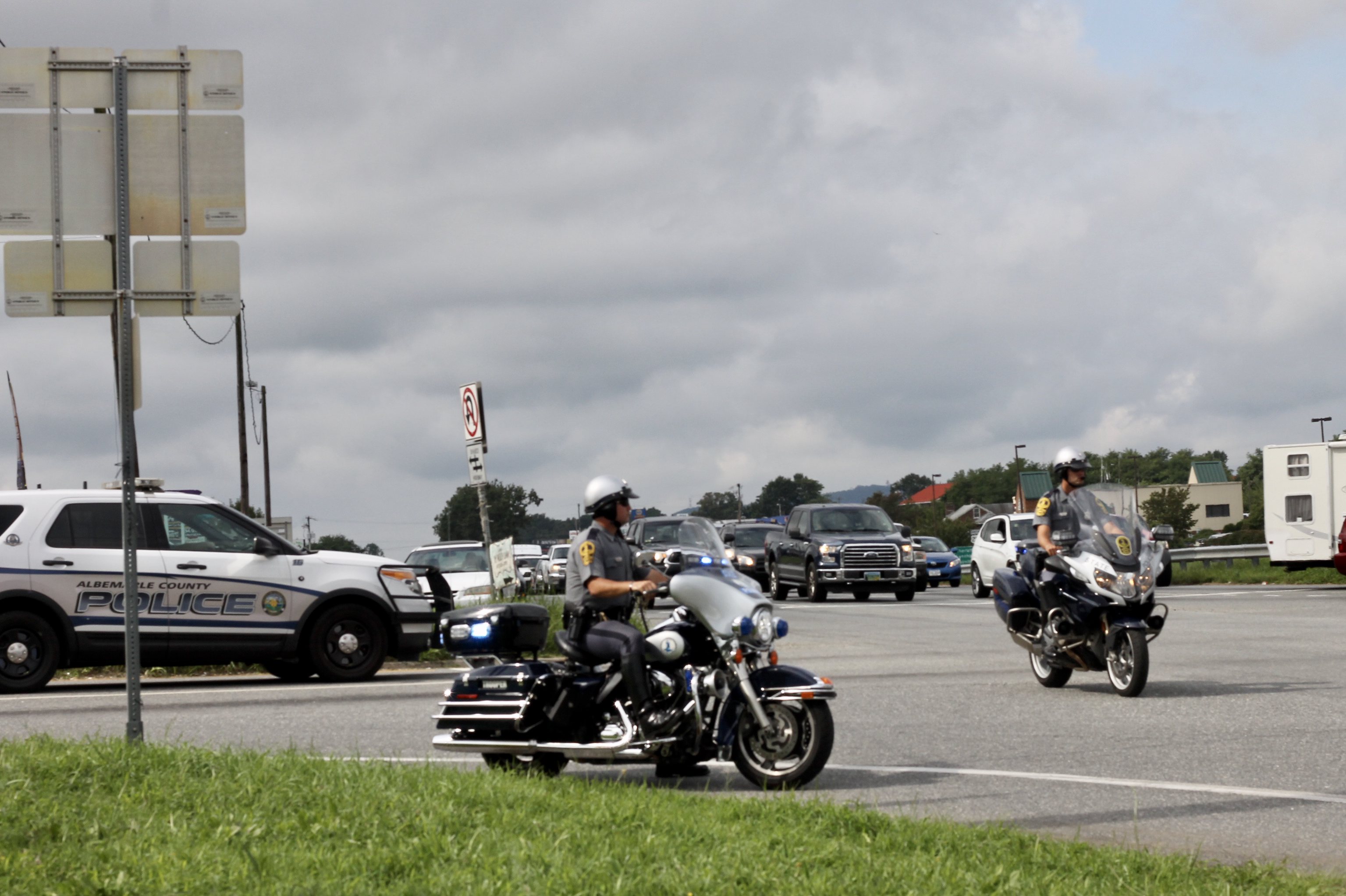 And it is kind of rude, taking up the road like that.* But out there walking, it occurred to me that this might be the kind of good trouble — necessary trouble — that John Lewis was talking about. If we want to make change — and that is what we’re calling for — we can’t keep barreling forward, our foot to the pedal. To pivot, we first gotta slow down, waaaay down.

And surprisingly enough, while plenty of cars zipped by, the drivers’ eyes glazed over, unseeing, and there were more than a few shouted “Trump 2020!” and “White lives matter” and F-bombs (or worse), the vast majority of responses were positive: Shouted thank yous! Exuberant waves! Horn honks (the dancing beep-beep-beeps were positive, the blaring uni-honks not so much)! Raised fists — black, brown, and white — punching through sun roofs and out opened windows! Cheers and applause! Enormous grins! 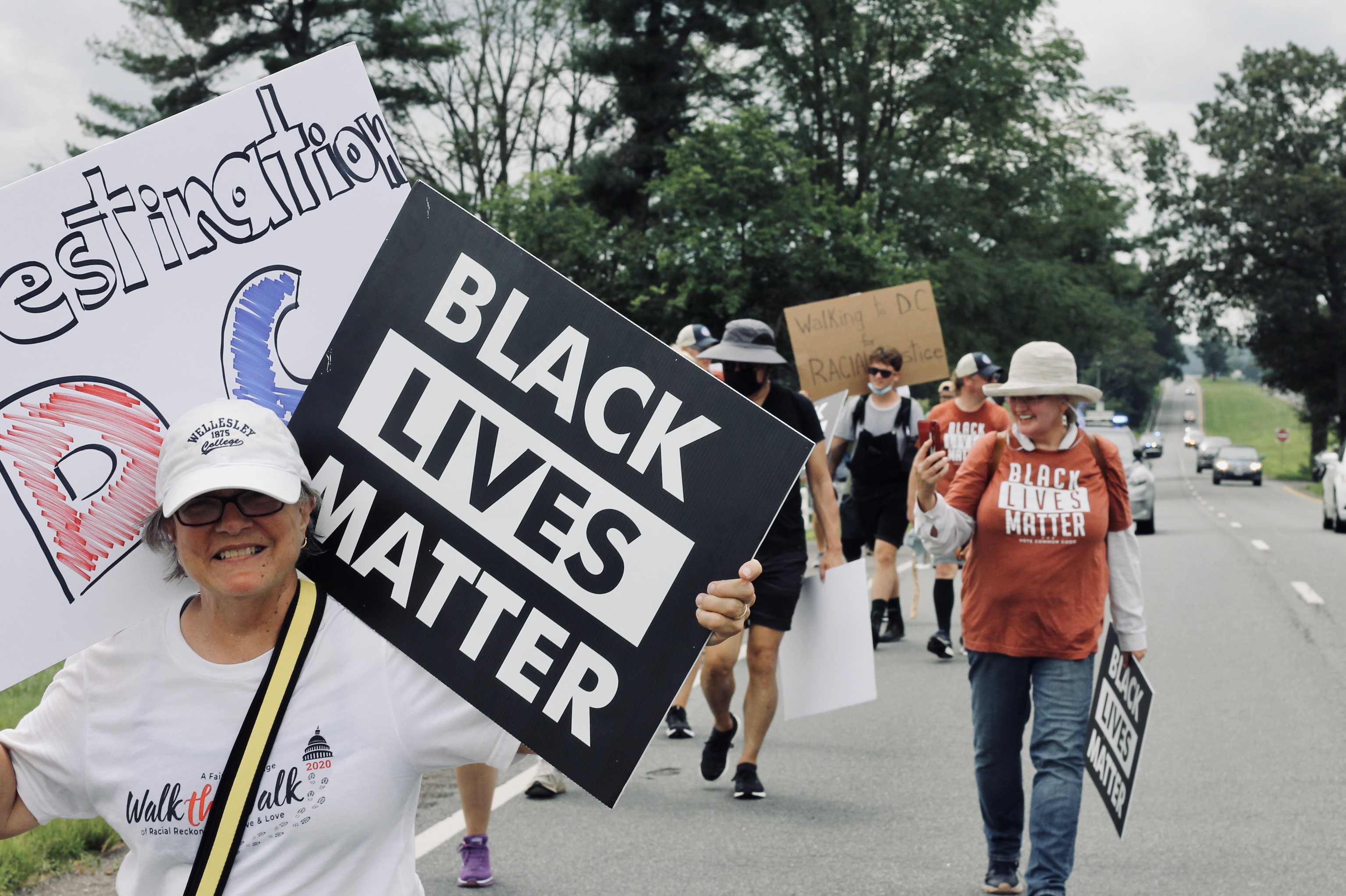 With all that affirmation, our little band of walkers didn’t feel so tiny anymore. People, lots of people, were with us. We were not alone. 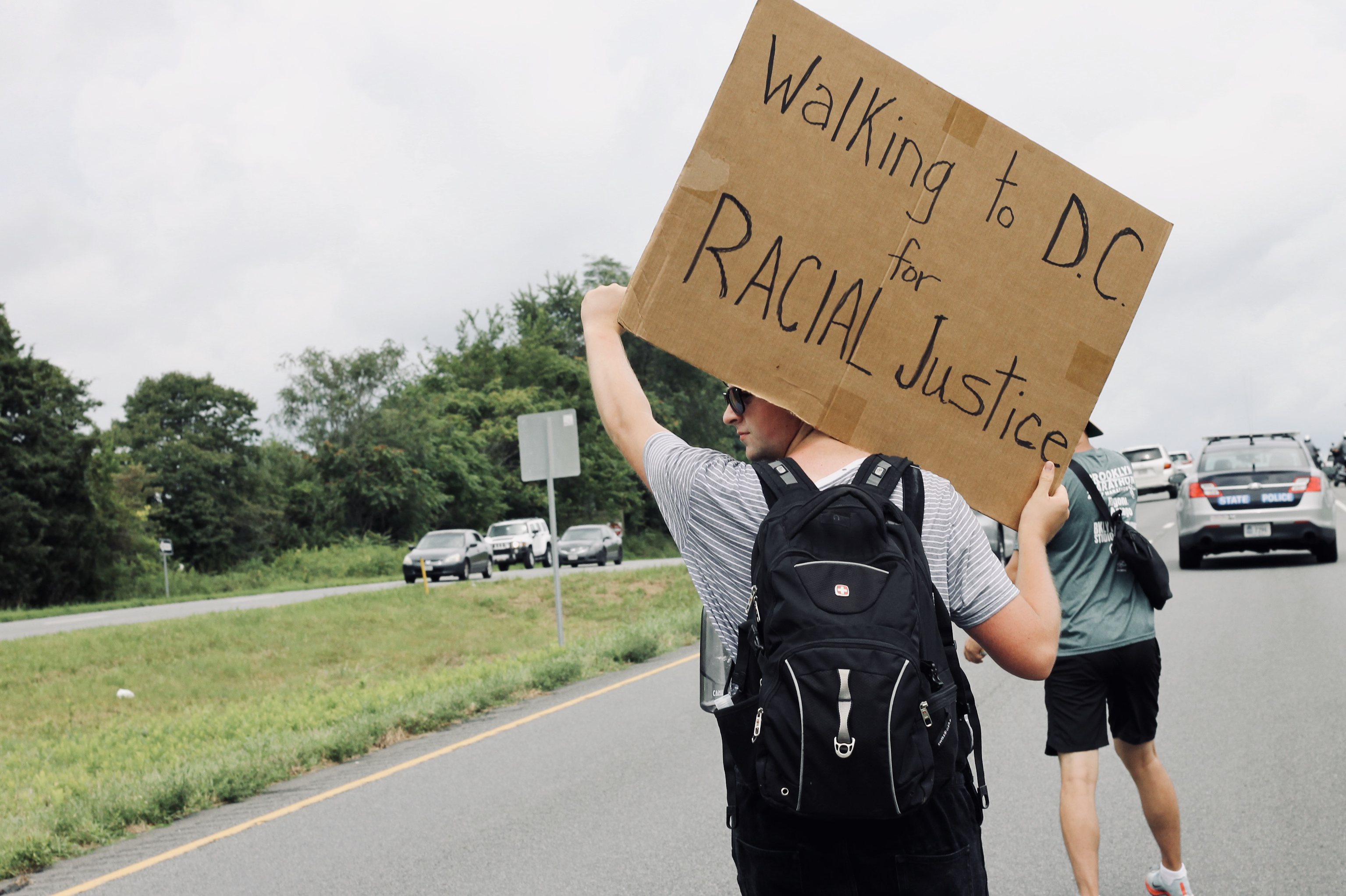 I’ve never done distance walking before, and out there on the pavement, putting one foot in front of the other — my left hip aching, my calves knotting, the sweat pooling in my eyes and blurring my vision — I discovered there’s nothing glamorous about it. Walking — distance walking — is hard. 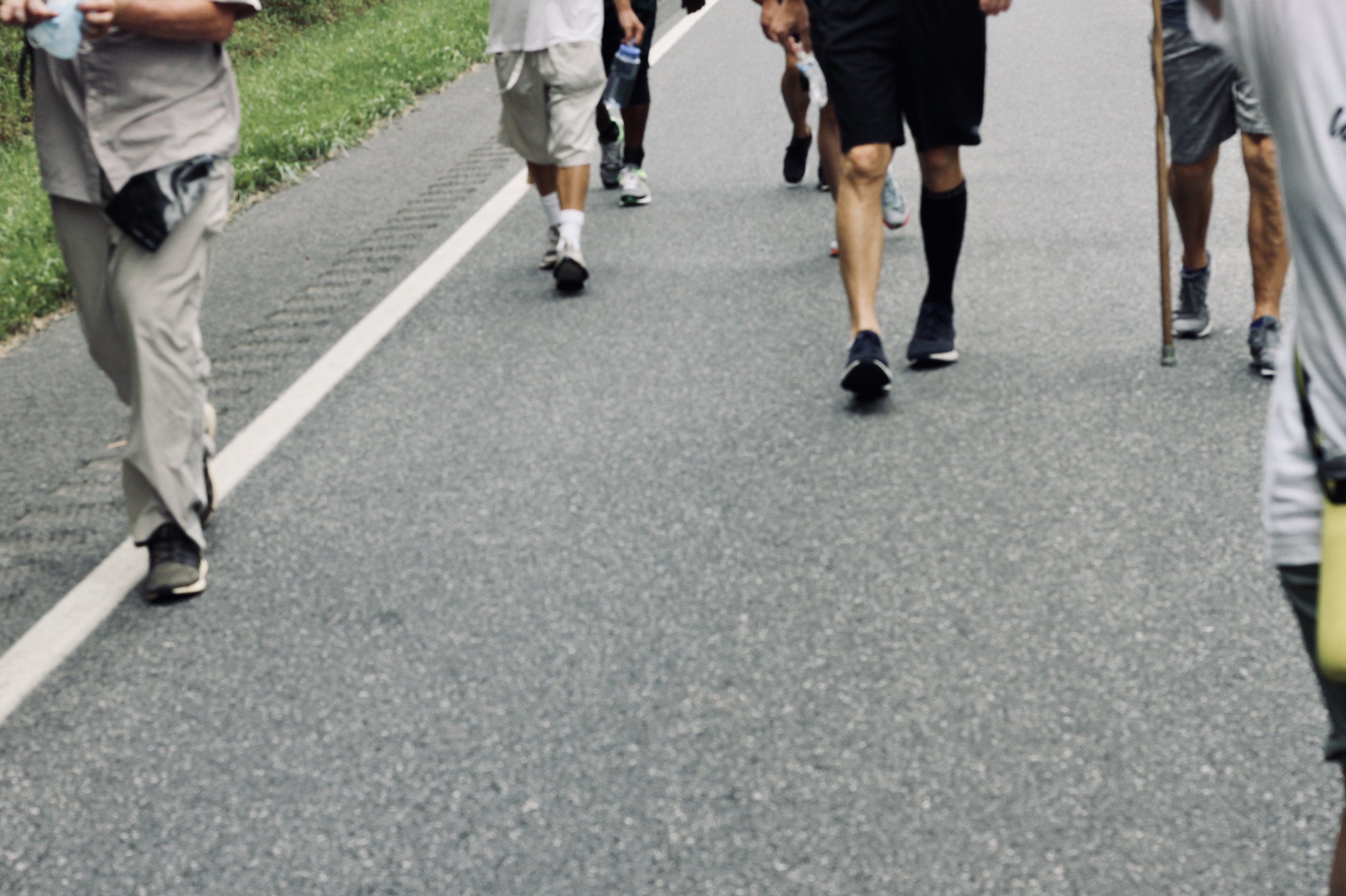 And yet the measured plodding is kind of zen, too. Outside of my comfort zone, removed from my routines, I feel present — to the people around me, to my thoughts, to my body — in a way that I rarely am.

I thought about how good it felt to be walking. 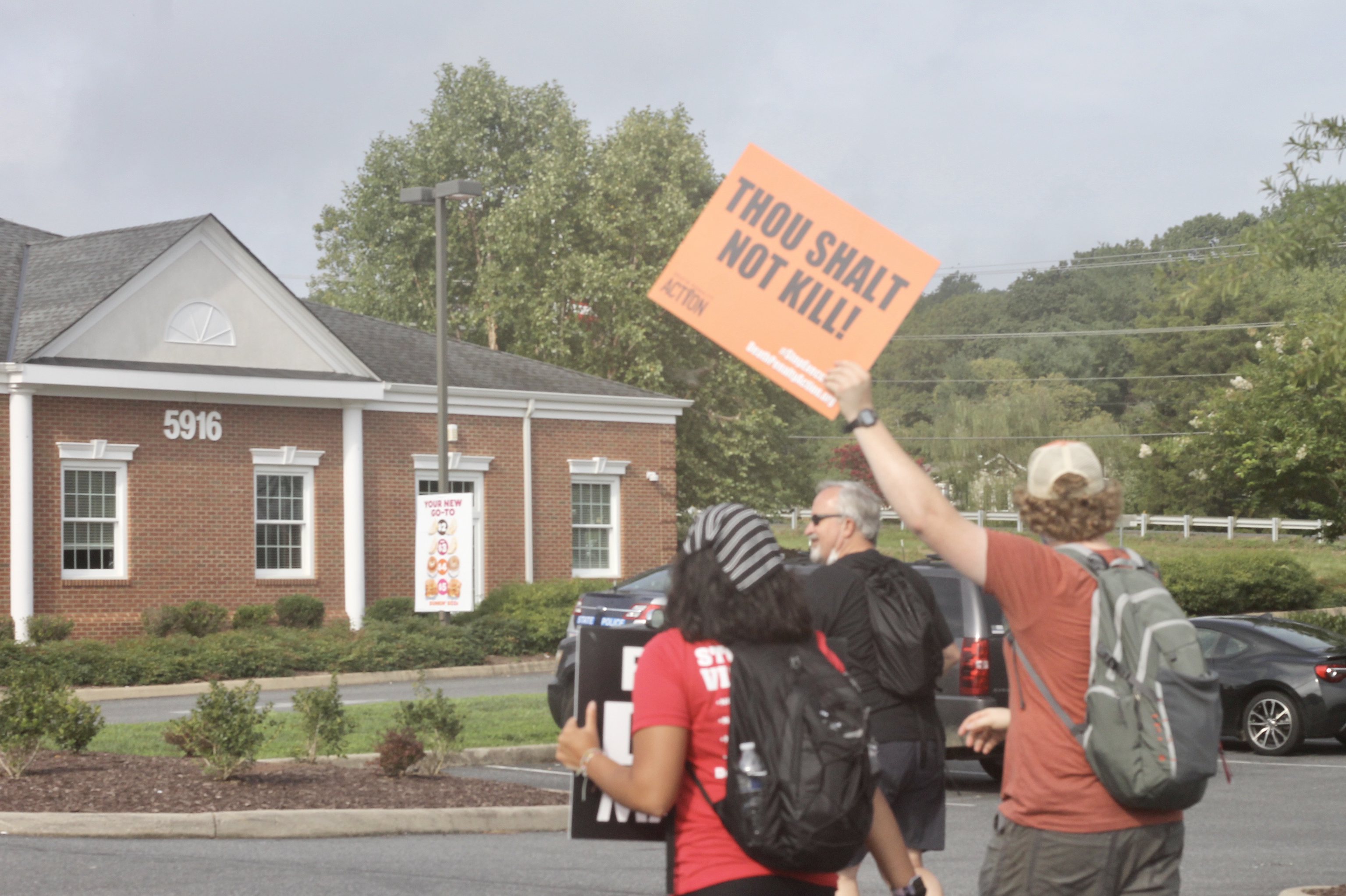 We walked about 11 miles that day and then, the walk over, I decided to come back the next day.

Yesterday, day two, I was the only day walker (the kids had to work, and they were exhausted). The group was smaller that day. 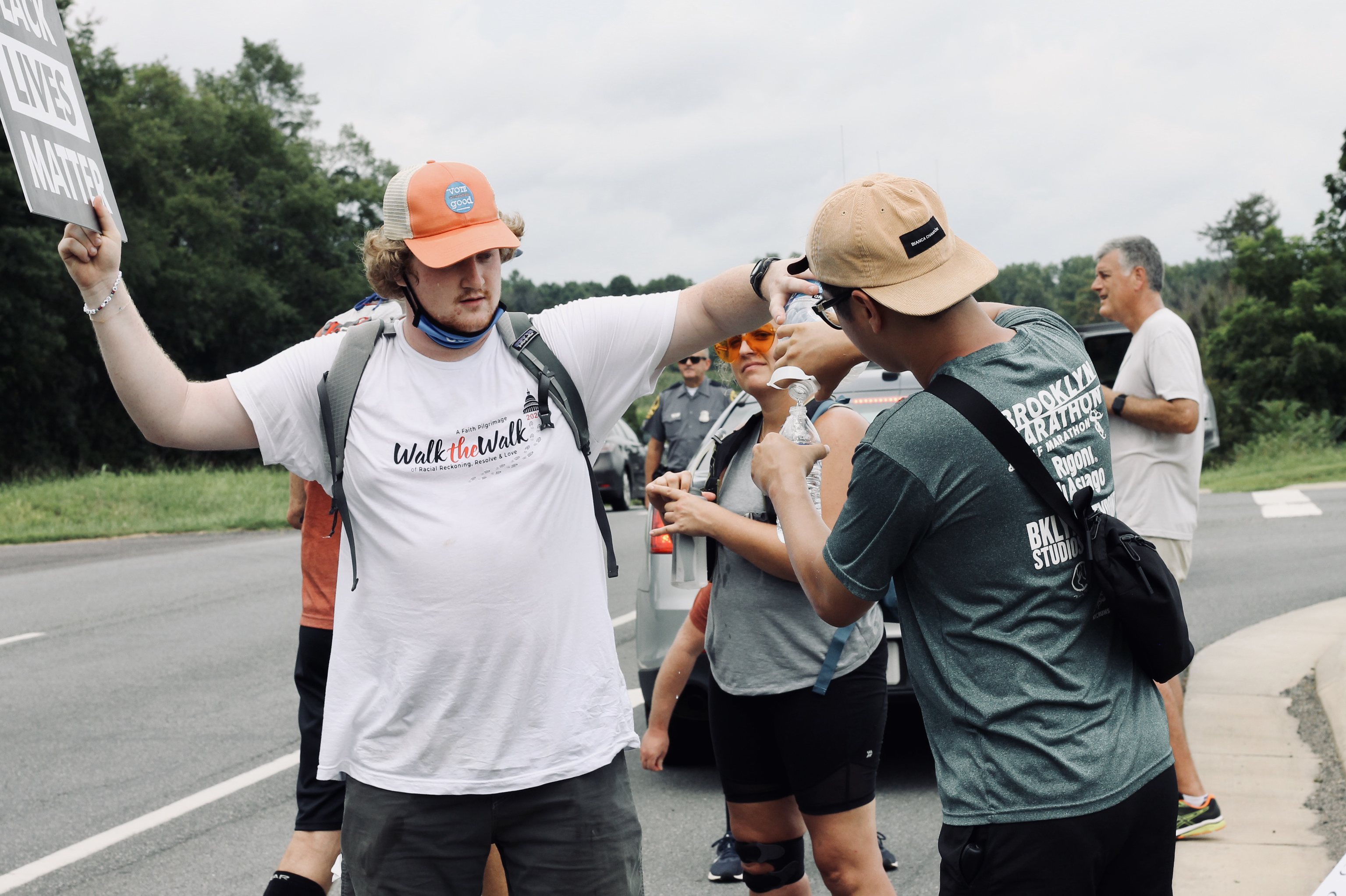 I enjoyed getting to know a little more about this band of walkers — people from California, Texas, Minnesota, Maryland, Georgia, Pennsylvania, Arizona — who were crazy enough to do something as audacious as this. 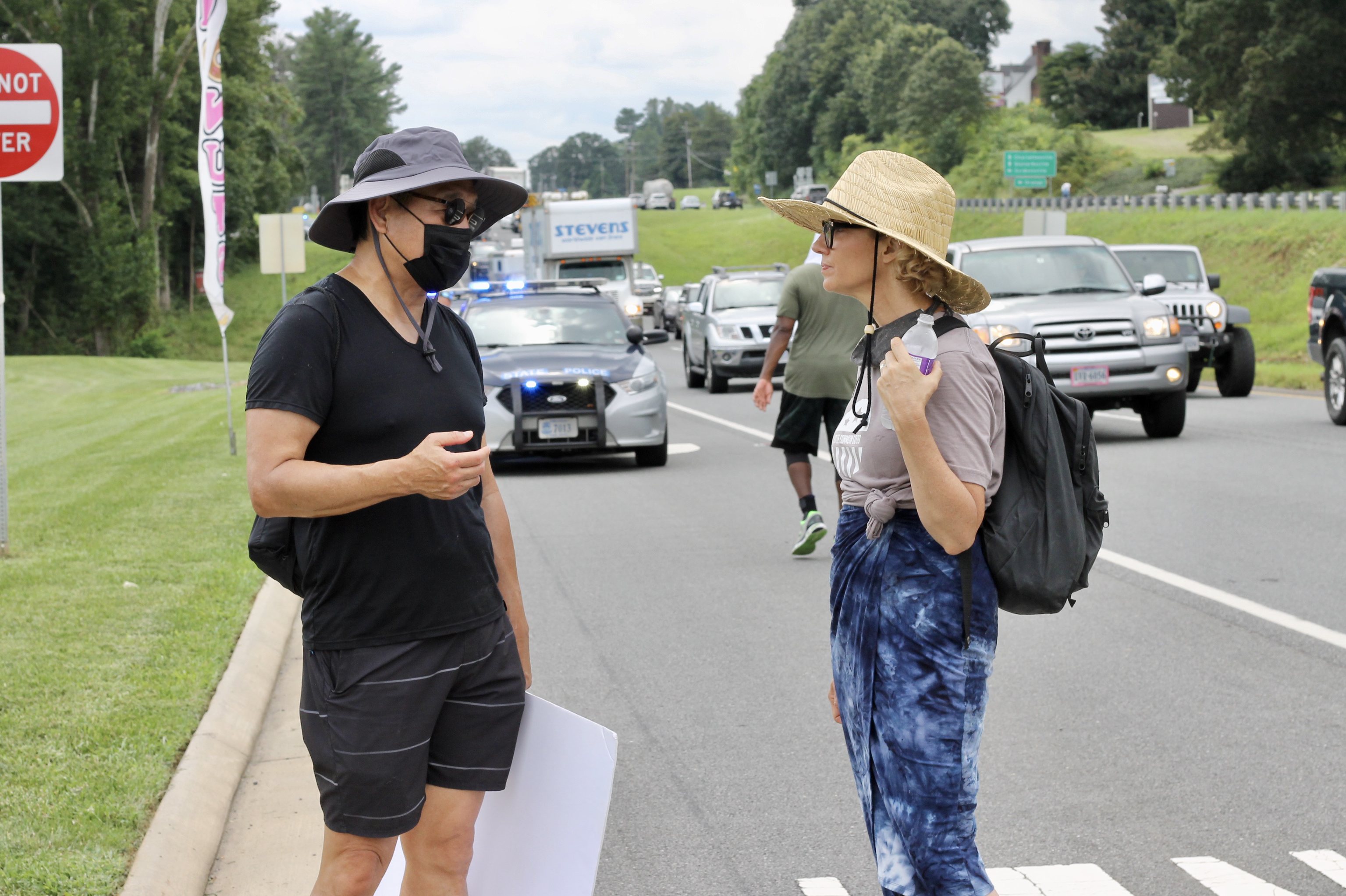 This march is sort of silly, really, the leader told me at the end of the day.

And I agree. It is silly. 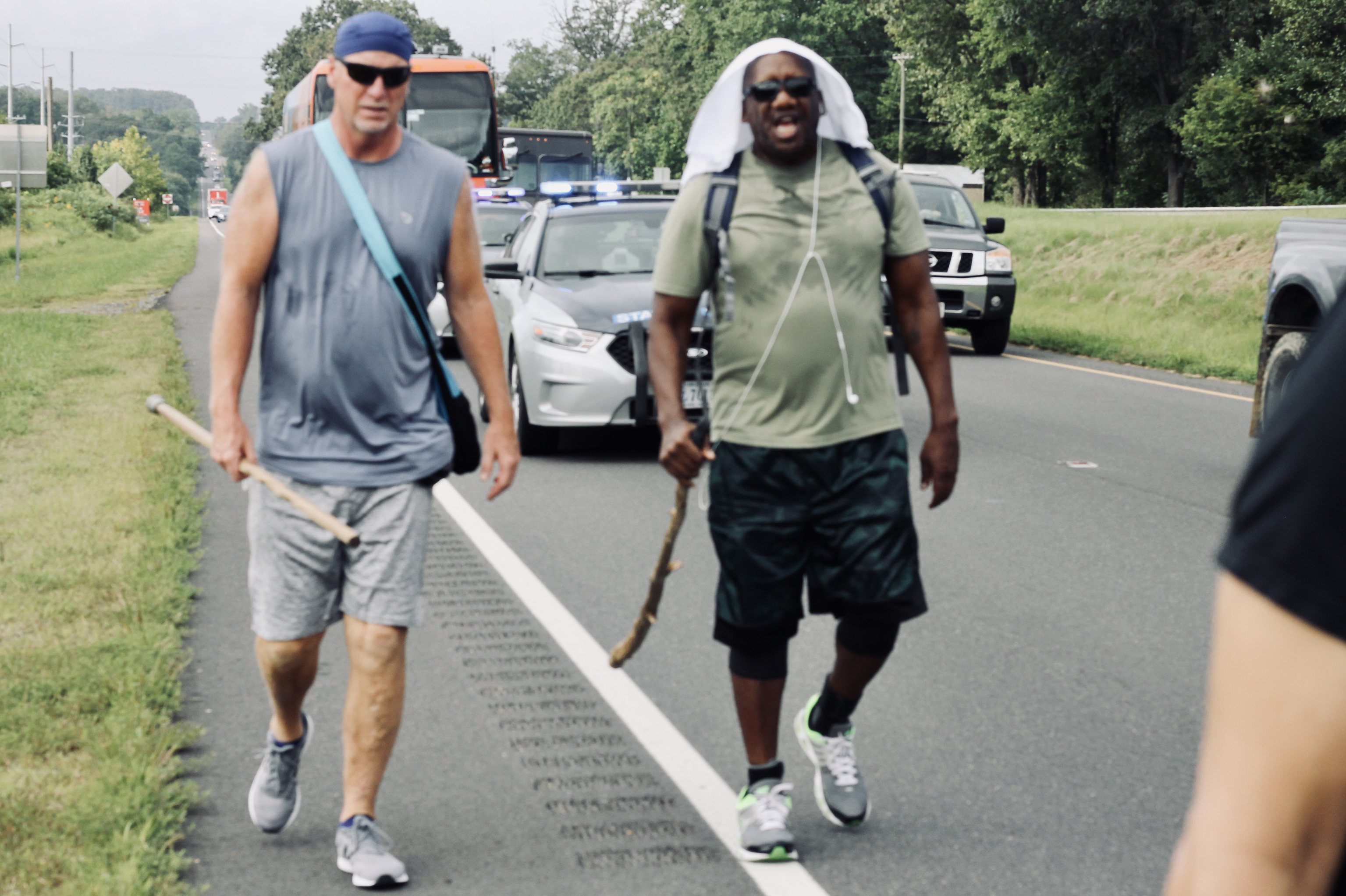 The important thing is to keep moving.

We walked 15 miles on Day Two. I’m taking today off to write, do chores (raspberries! tomatoes! nectarines!), and then back I go on Sunday, maybe even with some family members.

We’ll probably take a break then — the commute from home is getting progressively longer — but we hope to rejoin the group on Friday when they march into D.C. and end up at Black Lives Matter Plaza. Thousands are expected that day, I hear. 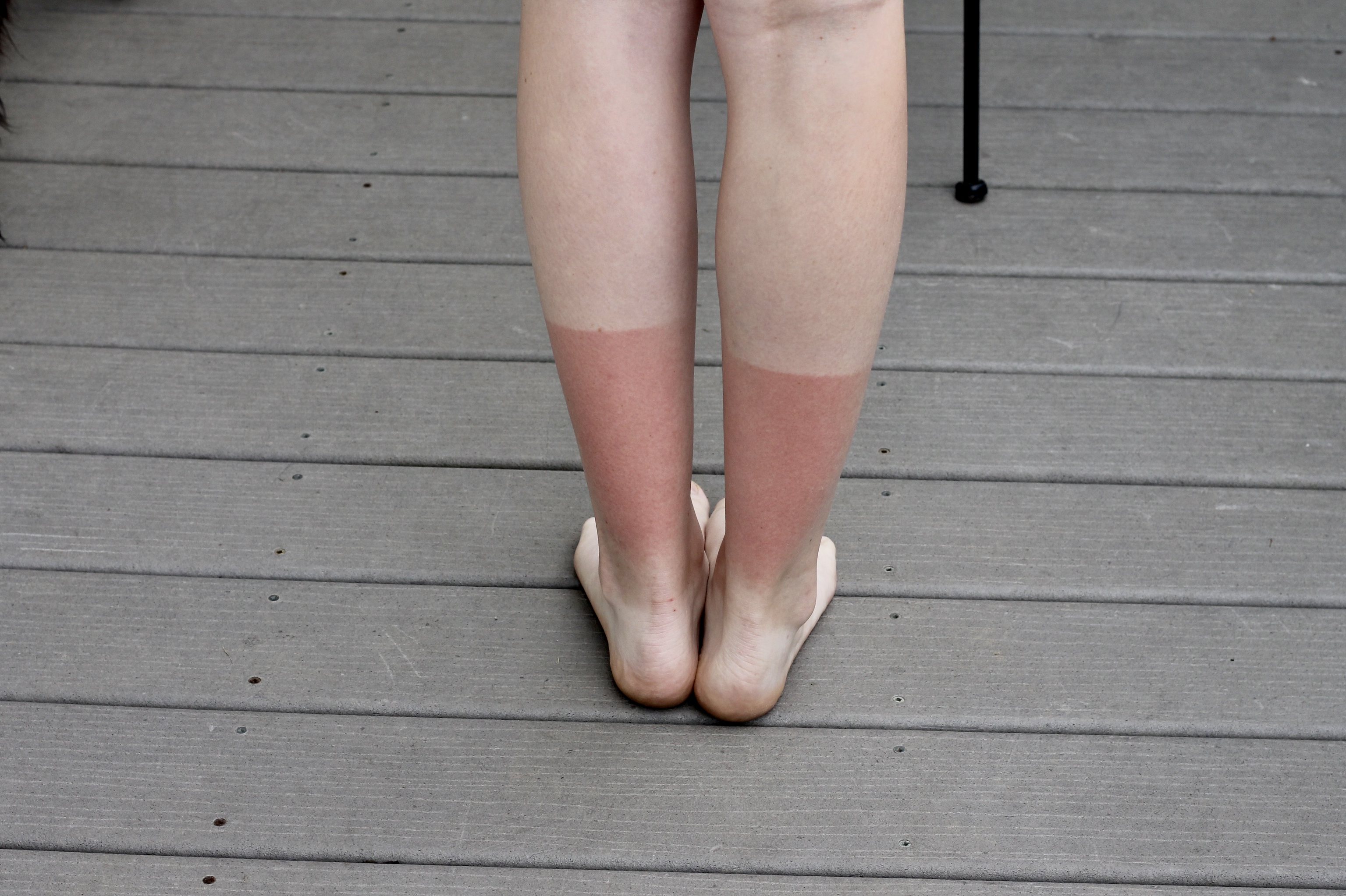 *I later heard that the organizers wanted to walk on the back roads but the police said it’d be easier to protect us on a highway walk.