On Sunday, my younger two kids, my husband, and I drove over the mountain (a bear crossed the road in front of us! with her cub!) to Culpeper to join with the marchers for day four of Walk The Walk 2020. 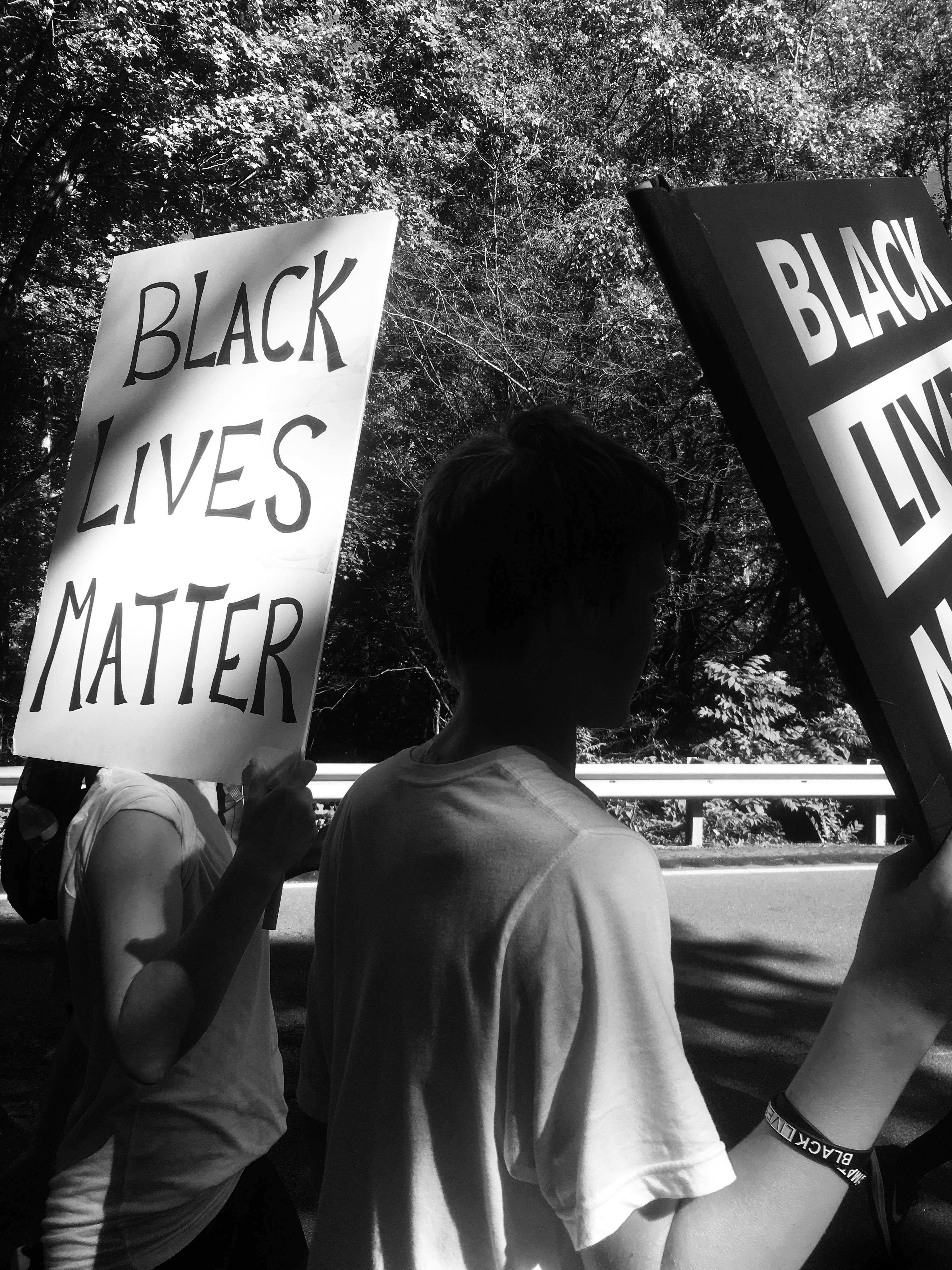 me and my son
photo credit: my younger daughter

My husband doesn’t like these sorts of things — I’m not an activist, he says (though he’s been doing more anti-racist reading than I have recently) — but the next day was our anniversary and I’d told him that I wanted him to come walk for a day for my present. Not that we’re in the habit of giving each other anniversary presents, or even really celebrating the day, but apparently my husband feels a certain level of guilt over our non-celebratory habits because he came, yay. 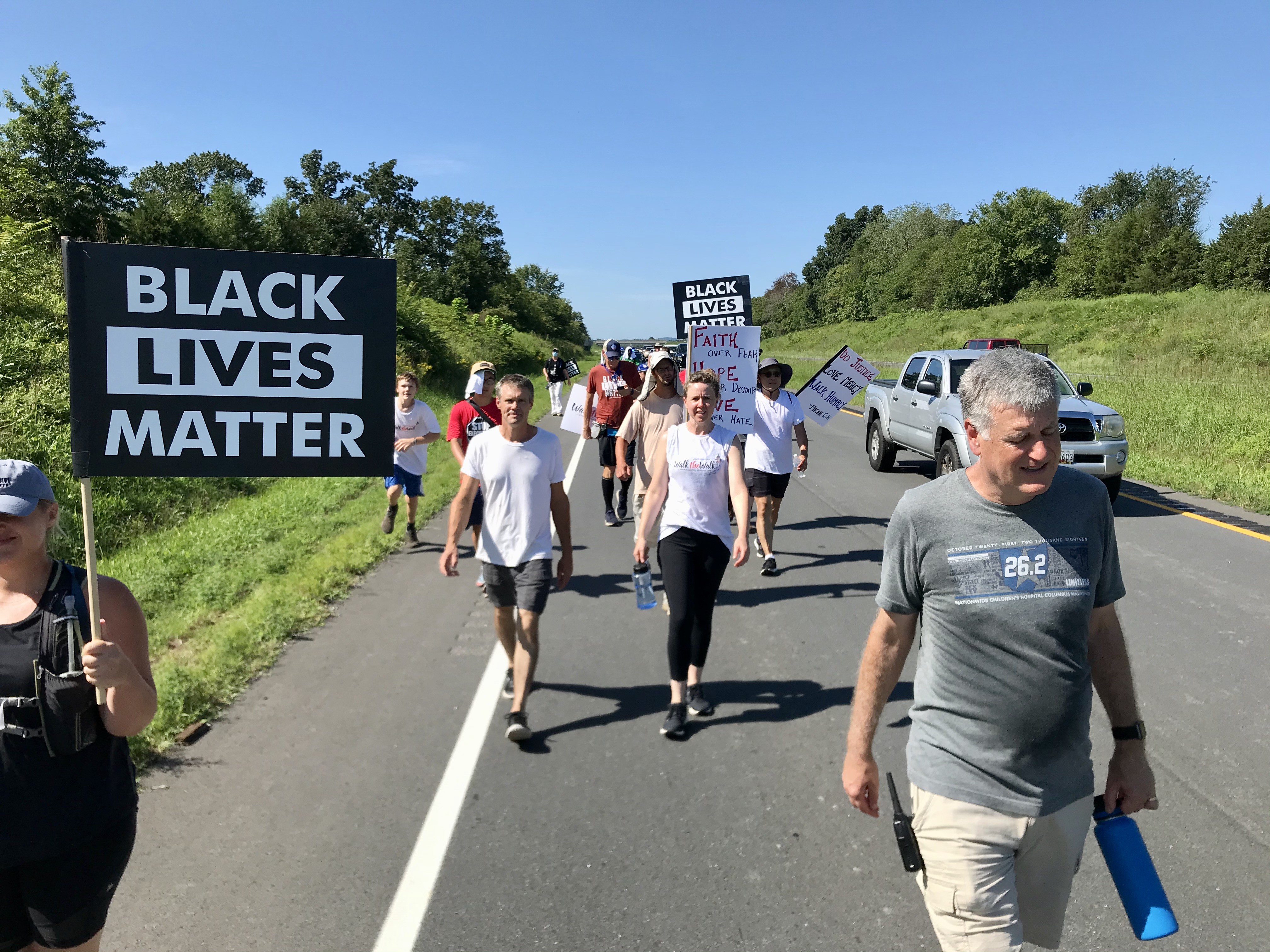 I thought the traffic might be lighter because it was Sunday, but no. At one point, traffic was backed up eight miles. (“Inconvenience is not injustice,” one of the marchers wrote on his Facebook page.) Also, it felt like the antagonism was worse. So much cursing. So much rage.

Still, the support far exceeded the negativity. One woman leaning far out her car window, frantically blew two-handed air kisses at us. Another woman, this one Latinx, the wind whipping her hair, her body slowly turning to look us in the eyes as she passed, chanted, “Thank you, thank you, thank you, thank you” over and over, her face serious, her voice fervent, like prayer. 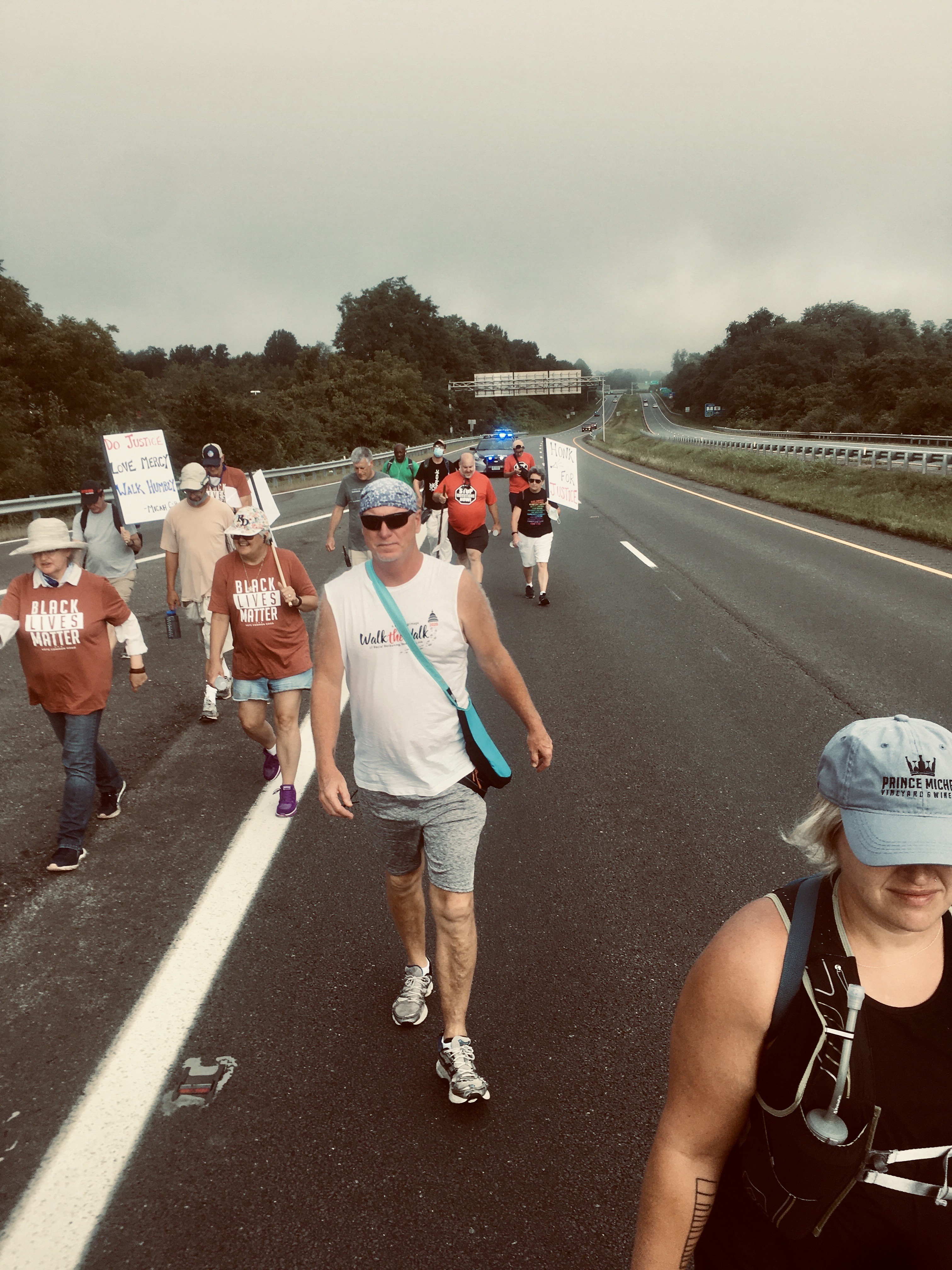 Conversational tidbits…
*One of the organizers, a former homicide detective with the Baltimore police, filled me in on the behind-the-scene work that goes into a march like this: communications with VDOT, state police, organizational leaders, safety precautions, death threats (for real!) and the intel that’s required as a result (or maybe regardless?).

*A retired officer with the Baltimore police — “You ever watch The Wire?” he asked me. “It’s all true.” — recounted some of the police shootings that have been in the news, breaking down the video footage to explain his take on where things went wrong. There are a lot of good cops, he said. But the system is overloaded. It needs to be reworked.

*A pastor said I surprised him. “I thought all homeschoolers were conservative,” he said, “but here you are with your kids and it confuses me.” I laughed and then filled him in on homeschooling’s wild diversity, but then I was left wondering: Are most homeschoolers conservative? In my world they’re not, so I’ve always assumed that belief is a myth, but maybe it’s actually accurate? 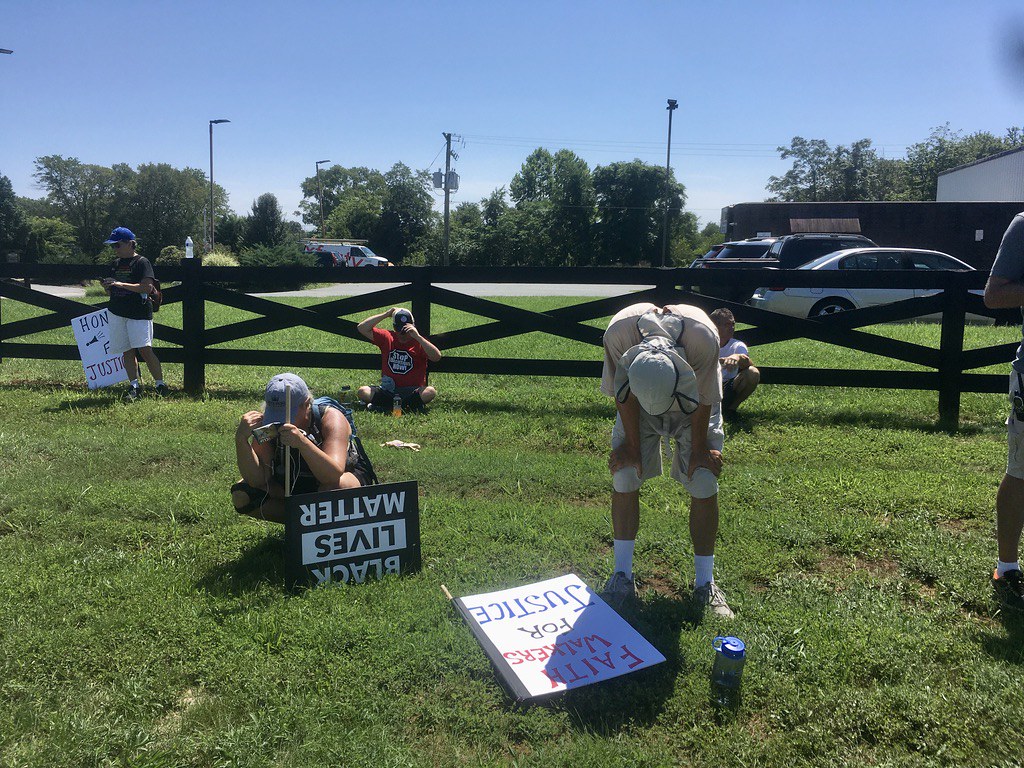 With no shade and no cloud cover, the sun was brutal. After lunch the heat became a real battle. My daughter felt like throwing up, so I pressed a cold water bottle to the back of her neck, and at the next break we iced ourselves down … literally. But then a couple miles from the end, her legs started cramping up so she hopped in the van and met us at the finish. And then my younger son kept doubling over from stomach pain — I think he ate too much at lunch? — and one of the leaders got so worried he put a van on standby. But my son claimed he was fine and actually ended up running the last little bit, ha. 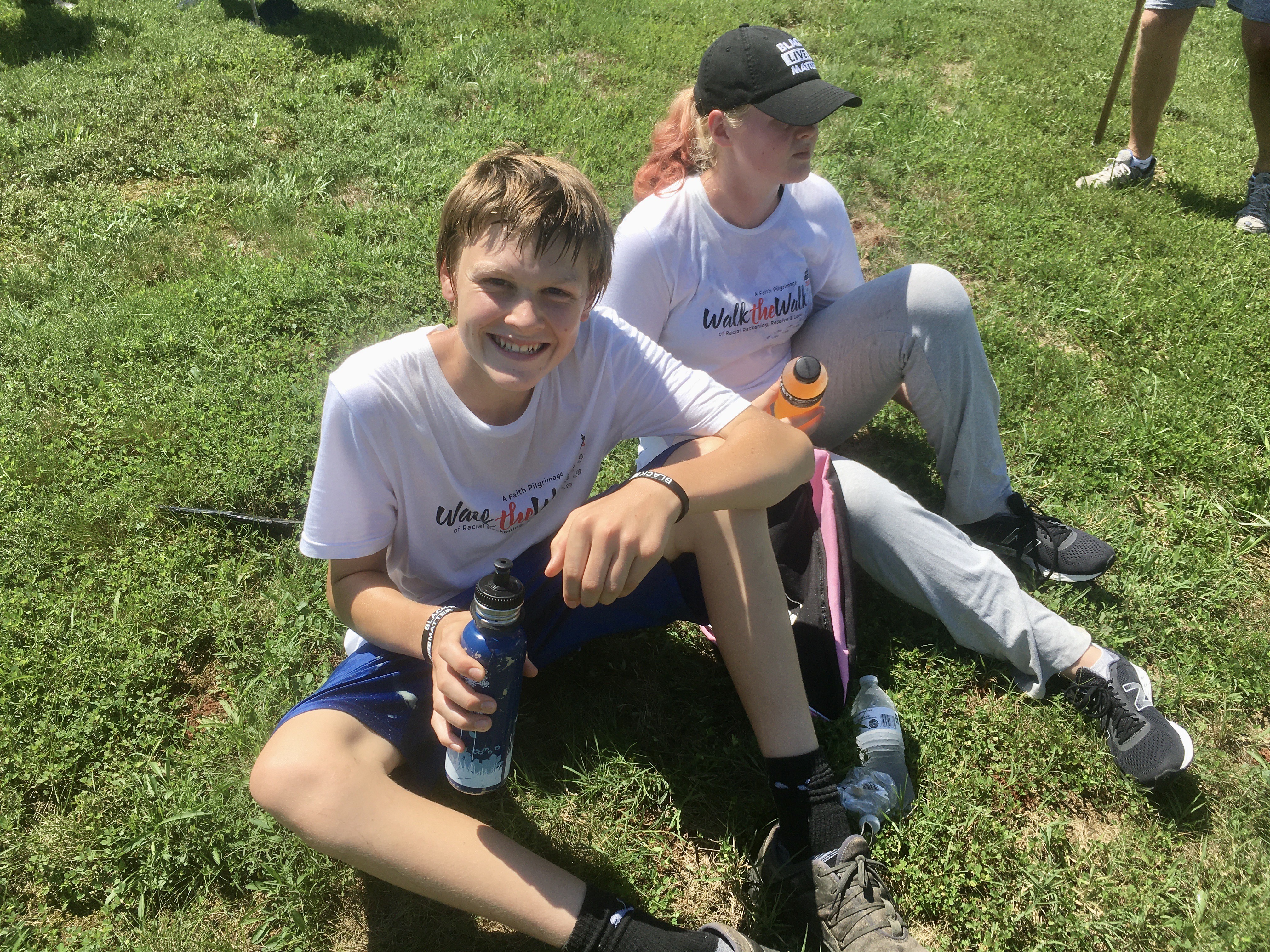 The next day he wasn’t even sore.

The 16 miles completed, we debriefed with the group at an ice cream joint, and then split for home, feasting on junk food all the way. (Strangely enough, it wasn’t until two days later that my 42-miles-in-three-days walk caught up to me — I could not. stop. eating!)

We meet up with the group again on Friday to walk into Washington DC. If you’d like to join, sign up here!