One of my sisters-in-law posted this meme to our group chat:


So far 2020 is like looking both ways before you cross the street and then getting hit by an airplane.  And then she added, “Praying everyone can take a deep breath before the locust come.”

Yep, pretty much sums it up, I think.

On Friday, our governor made it mandatory for people to wear masks in public. That morning, I stopped by Food Lion — the store we’d been boycotting — to see if they were in compliance. Every single employee was masked, hallelujah! (Since then, I’ve popped into other stores that had previously been entirely maskless and it’s all the same — everyone is now masked.)

It’s amazing, how different I feel now — so much more calm and confident. For the first time, we are all pulling together as a team. It makes me hopeful.

But it’s also kind of infuriating. Because here we are, nearly three months into this mess and we’re only just now beginning to take a unified approach. If only we had acted together. If only we’d had a plan. If only we’d all worn masks from the very beginning (as my sister-in-law advised), can you even imagine? Just think of how much confusion and anxiety, petty arguing, and suffering we could’ve spared ourselves!

But no, I can’t go there. It makes me too angry.

For now, I’ll just be grateful that I no longer have to drive all the way across town to buy a gallon of milk.

My aunt has taken to drawing cartoons: she has a series that she calls Pandemic Nights. This one made me laugh out loud. 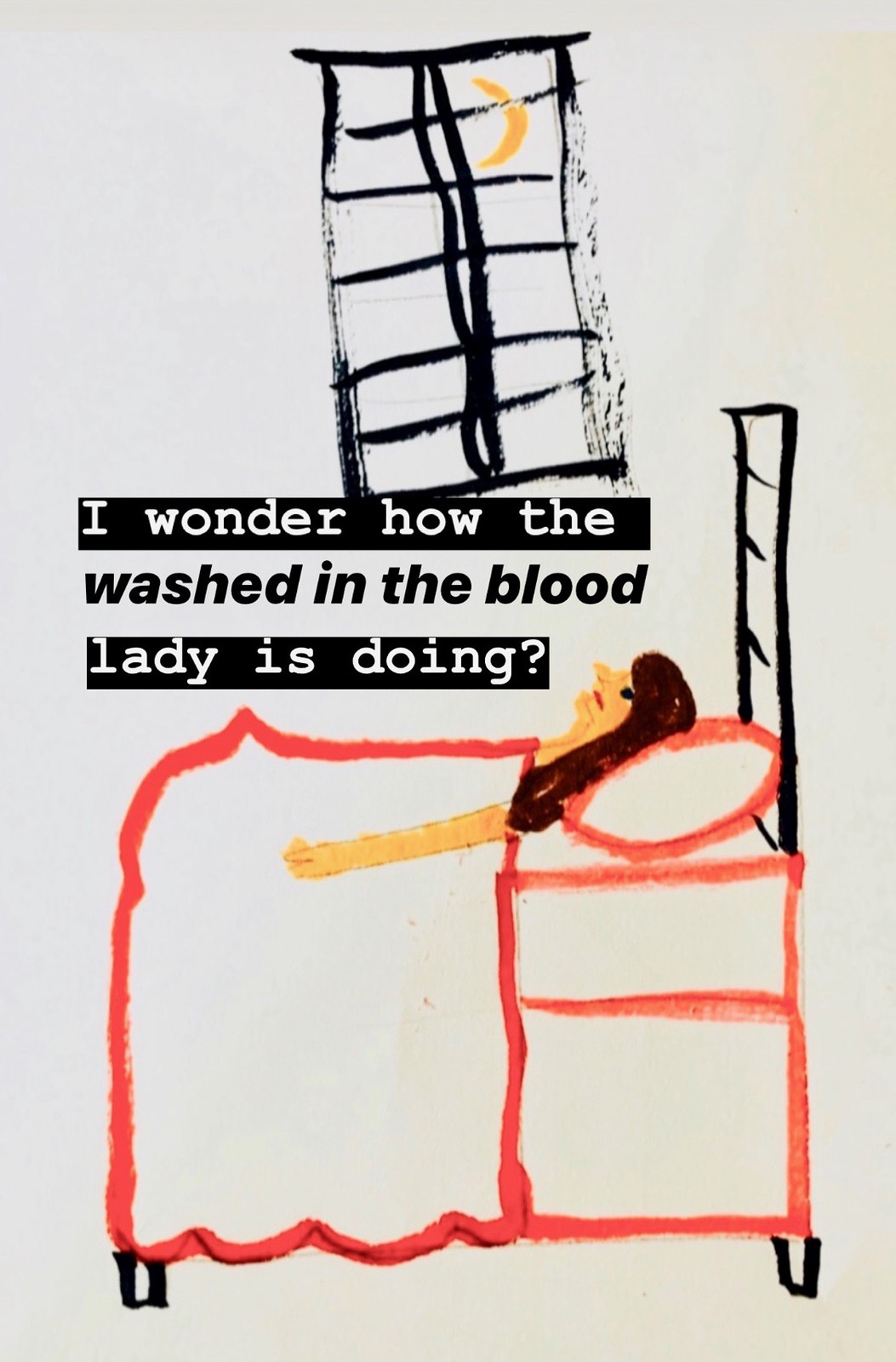 (If you don’t catch the reference, watch this.)

For awhile now, I’ve noticed that we don’t really hear much about the dead and dying. Somehow, in all the pandemic flurry, that part feels tucked away, hidden from view. And because we don’t see the sick, it’s easy to think Covid happens to just certain people, the ones they tell us are more susceptible: the black, the elderly, the obese.

It makes me think of Vietnam, how that was the first time a war was televised and what a huge effect that had. What if we were televising the pandemic, actually showing what’s happening in hospitals? Filming the people dying alone, the exhausted medical professionals, the distraught family members?

When I mentioned this to my husband, he said, “You just don’t see it because we don’t have TV. They’re probably showing it on the news.”

Maybe. But maybe not? We get the Washington Post and the NY Times and listen to NPR, and still, I somehow feel like I’m not getting the whole picture.

(And then last week, Terry Gross interviewed a journalist who investigated the death care system in NYC. It was exactly the sort of reporting that I’ve felt is missing.)

And now, a story.

A couple weeks back, a friend from church was in a bad bicycle accident. In one of her caringbridge posts, her mother wrote that, when she told her daughter that the nursing staff would train some care partners for her, her daughter wrote in a text, “Can I have a therapy pony?”

It was all a joke, of course — her brother, the one who’d be caring for her, responded that he was not going to clean up any pony poop — but it got my wheels turning: my daughter has a pony, and we certainly had lots of time on our hands.

On a whim, I emailed one of her housemates with my idea: a surprise pony drop-in. Yes, please! the housemate responded. So my daughter borrowed my dad’s truck and an animal trailer from another friend, and then she spent hours trying to train Ellie to ride in the trailer. 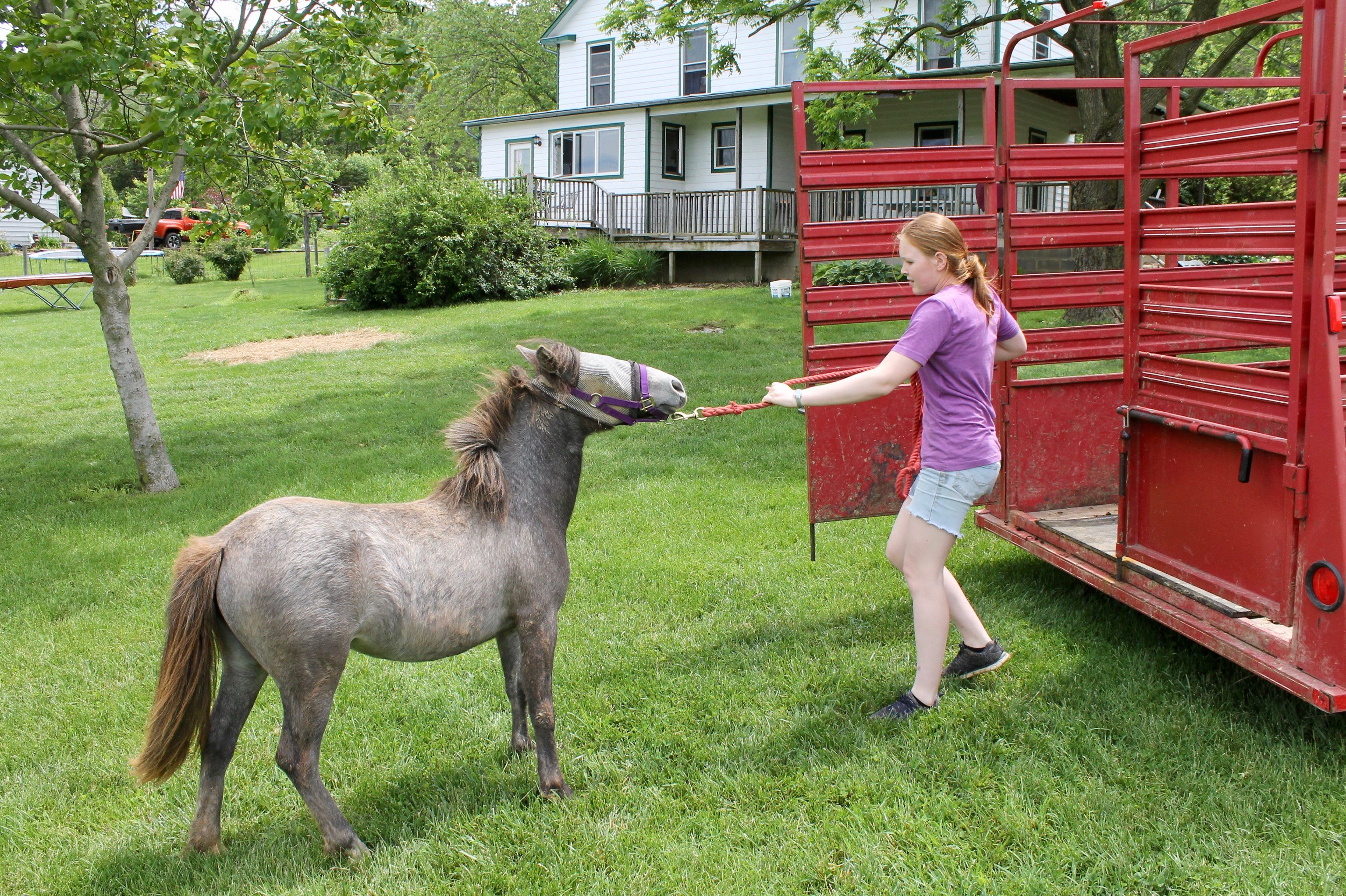 Ellie would get in the trailer just fine, but whenever the truck moved, she’d go berserk, rearing up and getting her feet caught between the slats. Once she even flipped over on her back.

About a half hour before we were supposed to leave for town, I emailed that we couldn’t make it after all: Ellie just wasn’t complying.

“I could just ride in the back with her,” my daughter said.

When she’d suggested this before, I’d dismissed the idea outright, but now I wondered if it might now be such a bad idea after all?

My daughter quick did some research. “I think riding in trailers is only illegal on the highway,” she said. “We can take the back roads.”

I called my husband. “Whatever,” he said. “Just don’t tell me what you’re doing.”

Only several miles down the road, a white car pulled up behind us.

The trailer slats obstructed my view of the car, but maybe? My daughter had completely disappeared from sight. Was she flat on the floor? And then the car turned off — it was a cop! — and my daughter popped back up, laughing. Good grief! 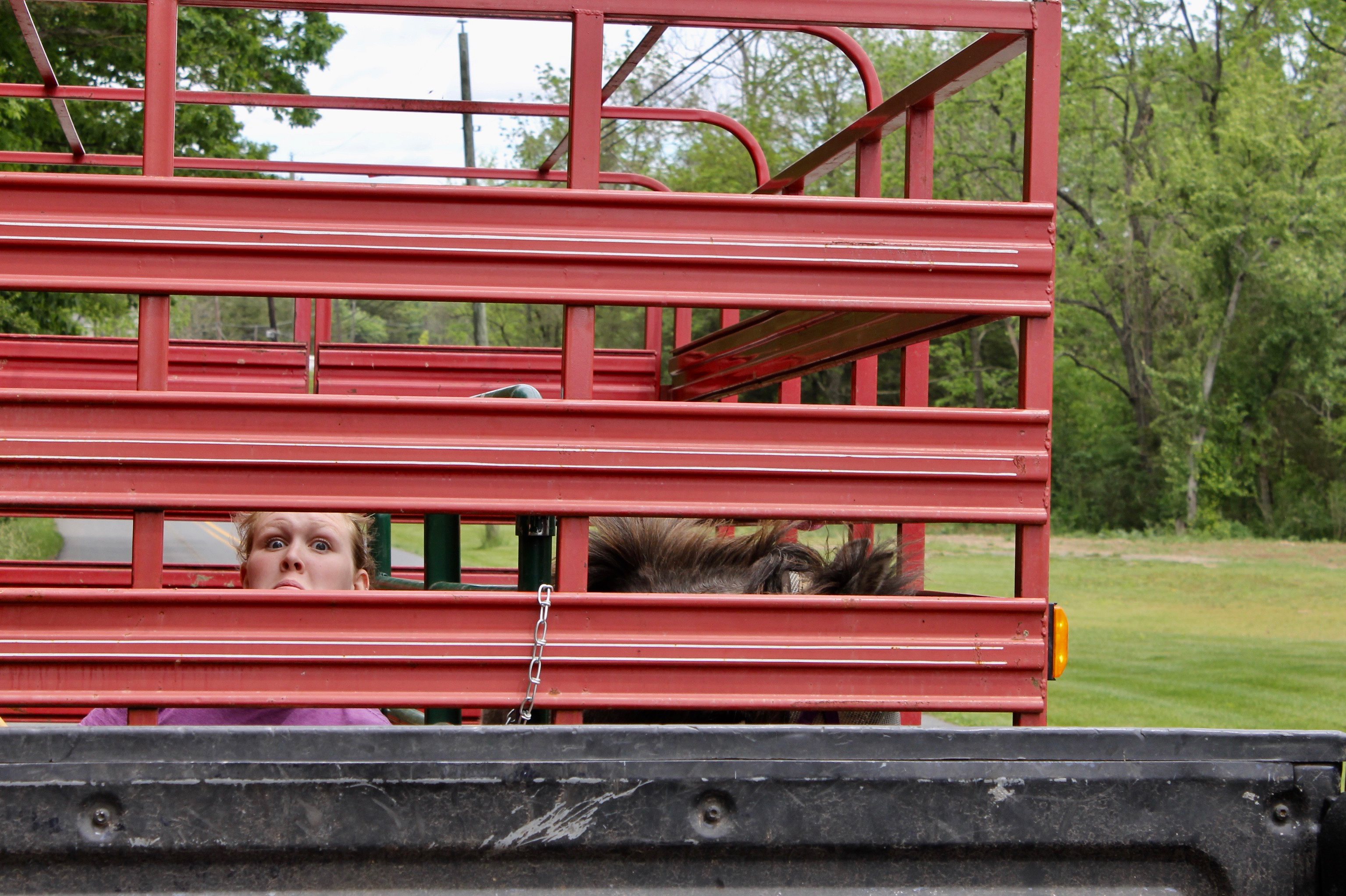 In town, we parked at the university and then walked to the house, giggling all the way and hoping Ellie wouldn’t take a spontaneous dump. 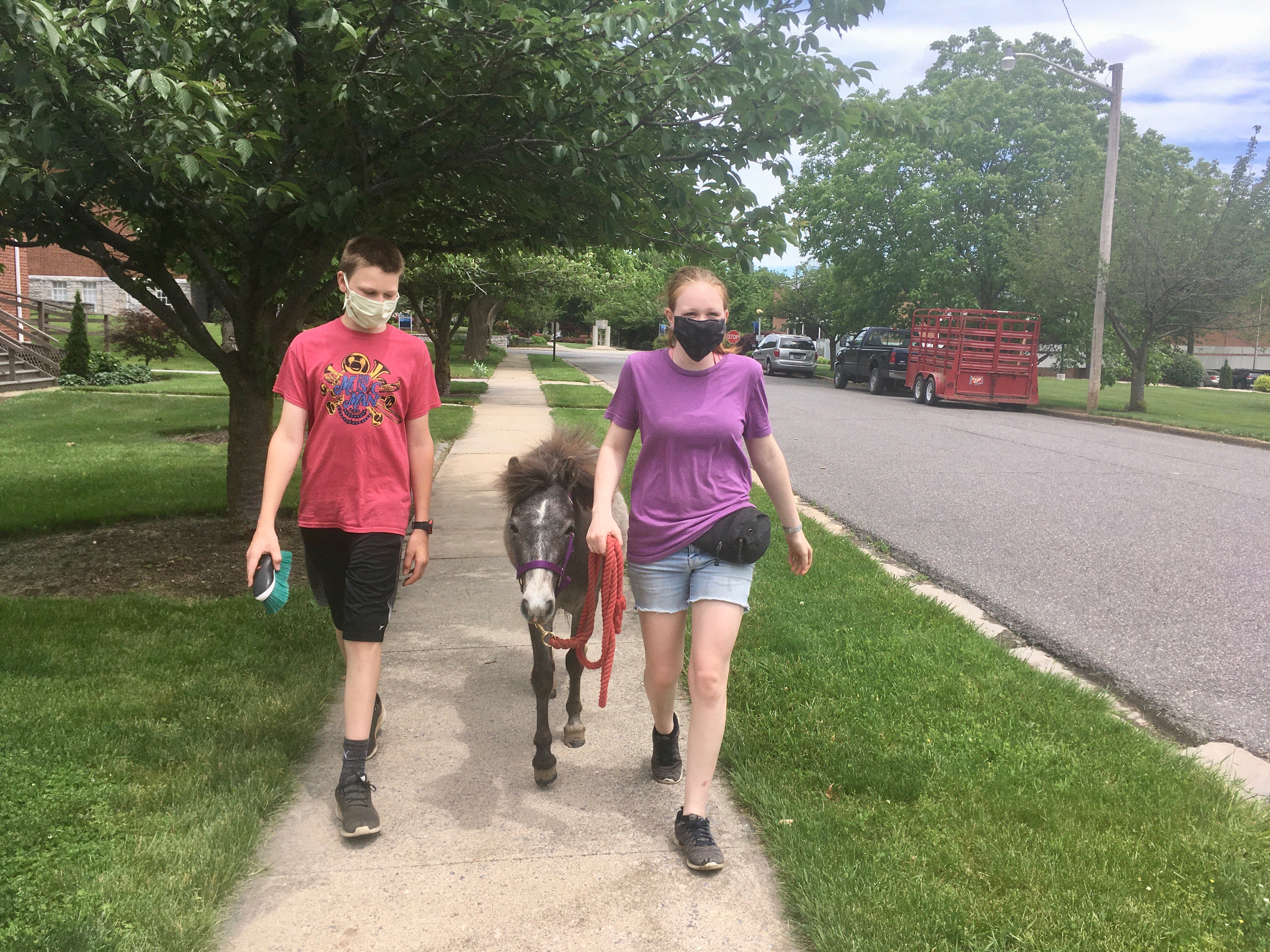 At the house, we waited in the yard — the housemates had set up a little sitting area under a shade tree — while they blindfolded our friend and led her over. 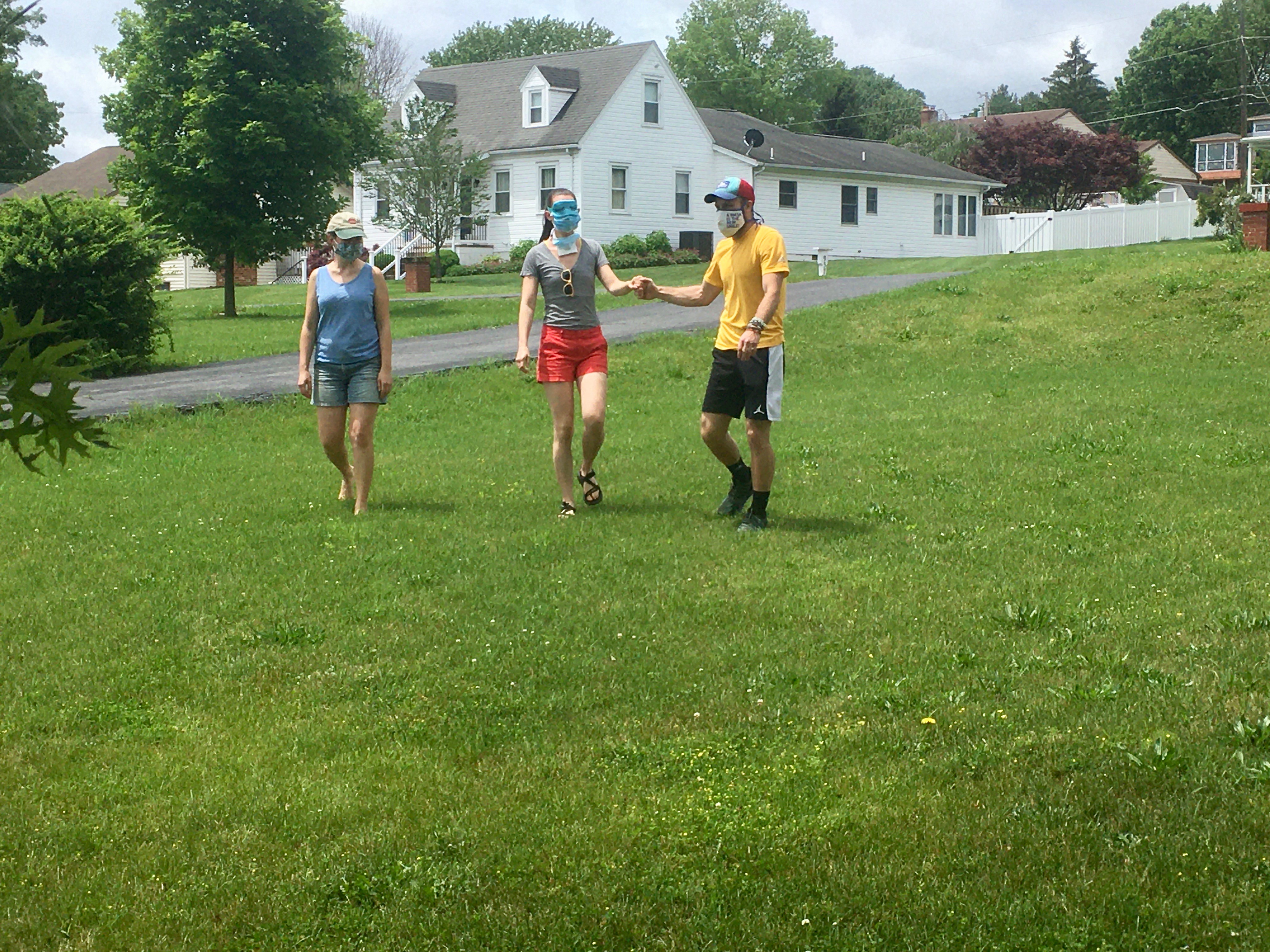 Touching Ellie’s nose, her first suggestion was a goat, but then, realizing it was a pony, she burst out laughing and jumped up and down. 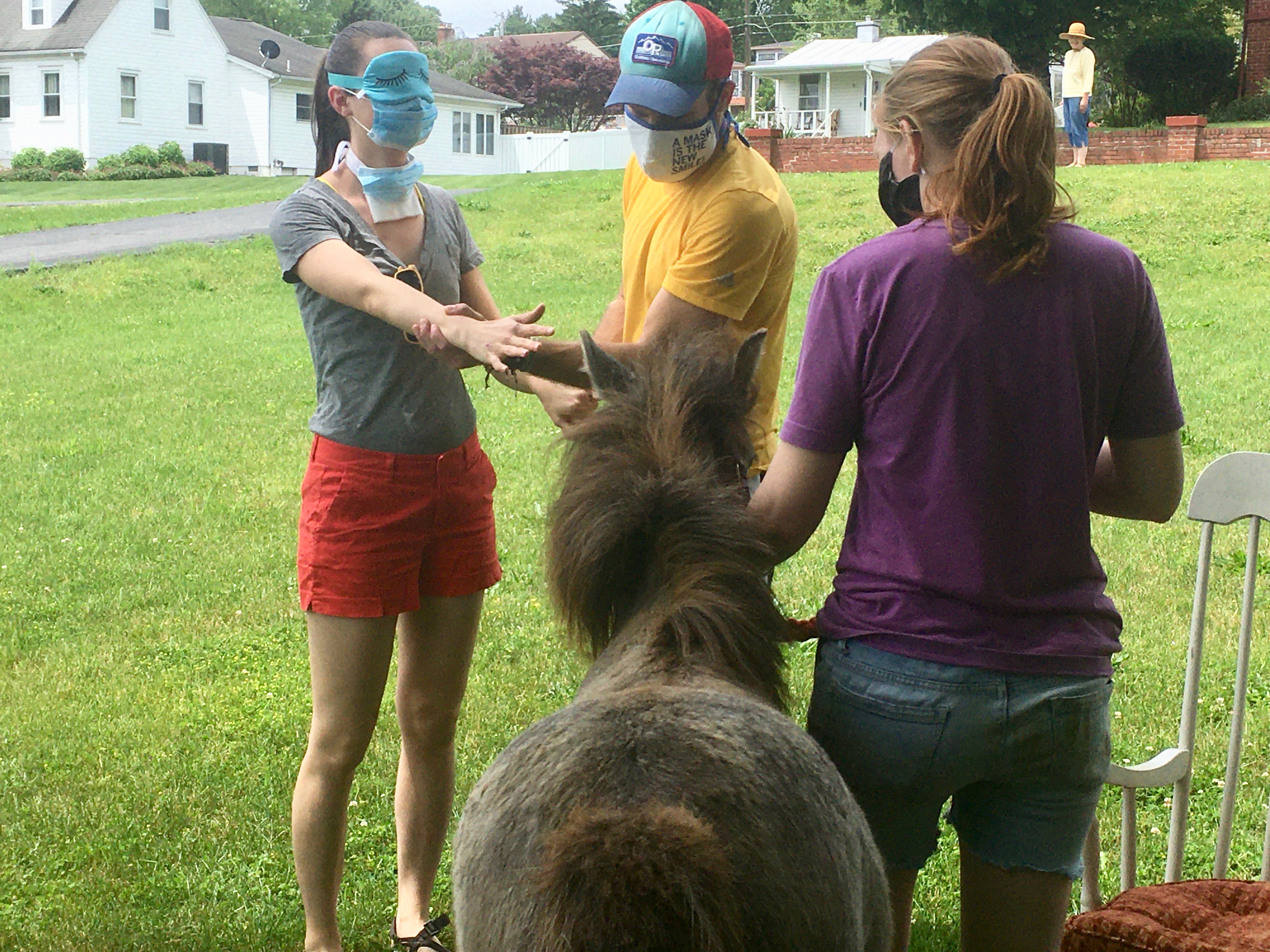 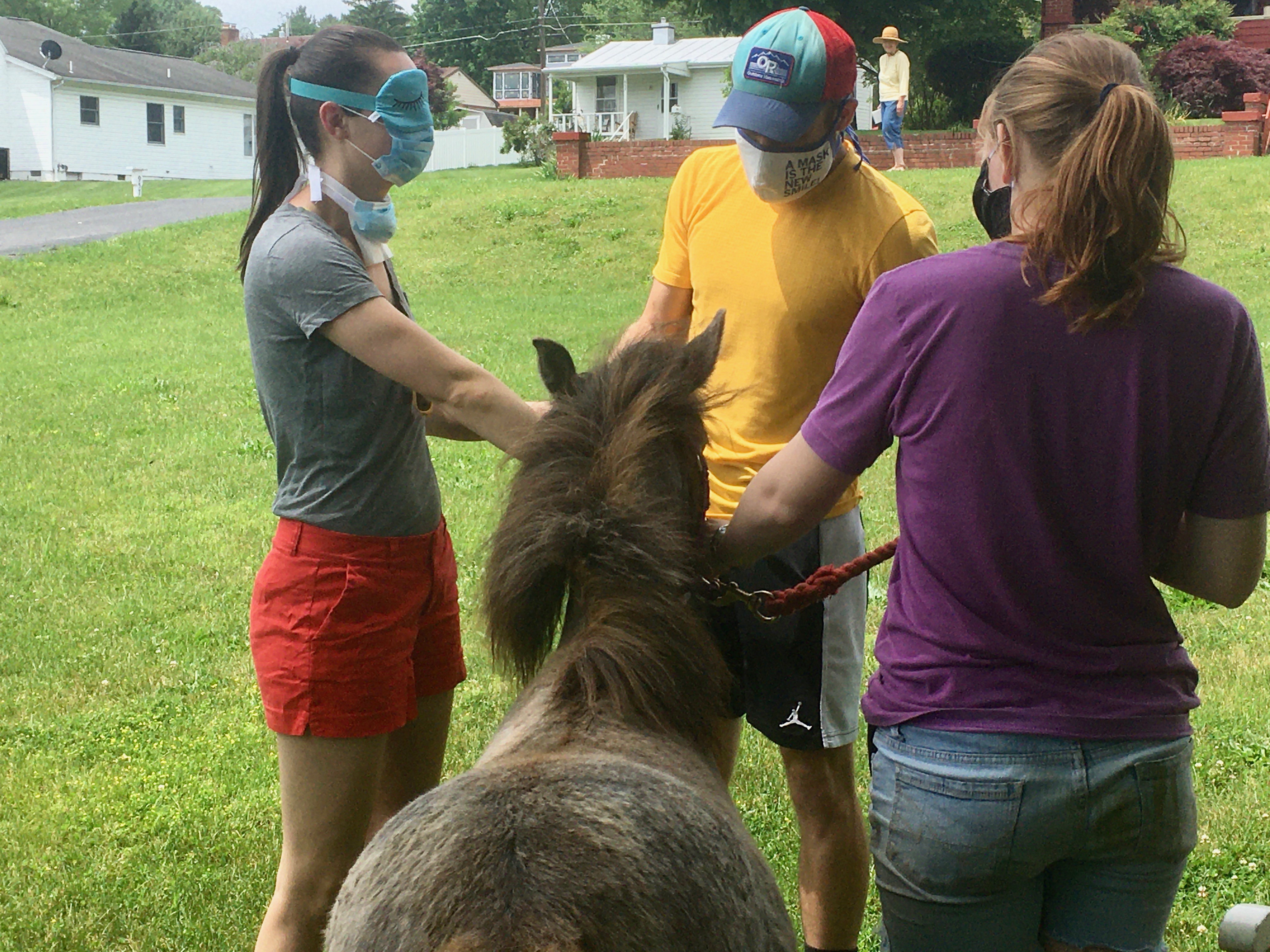 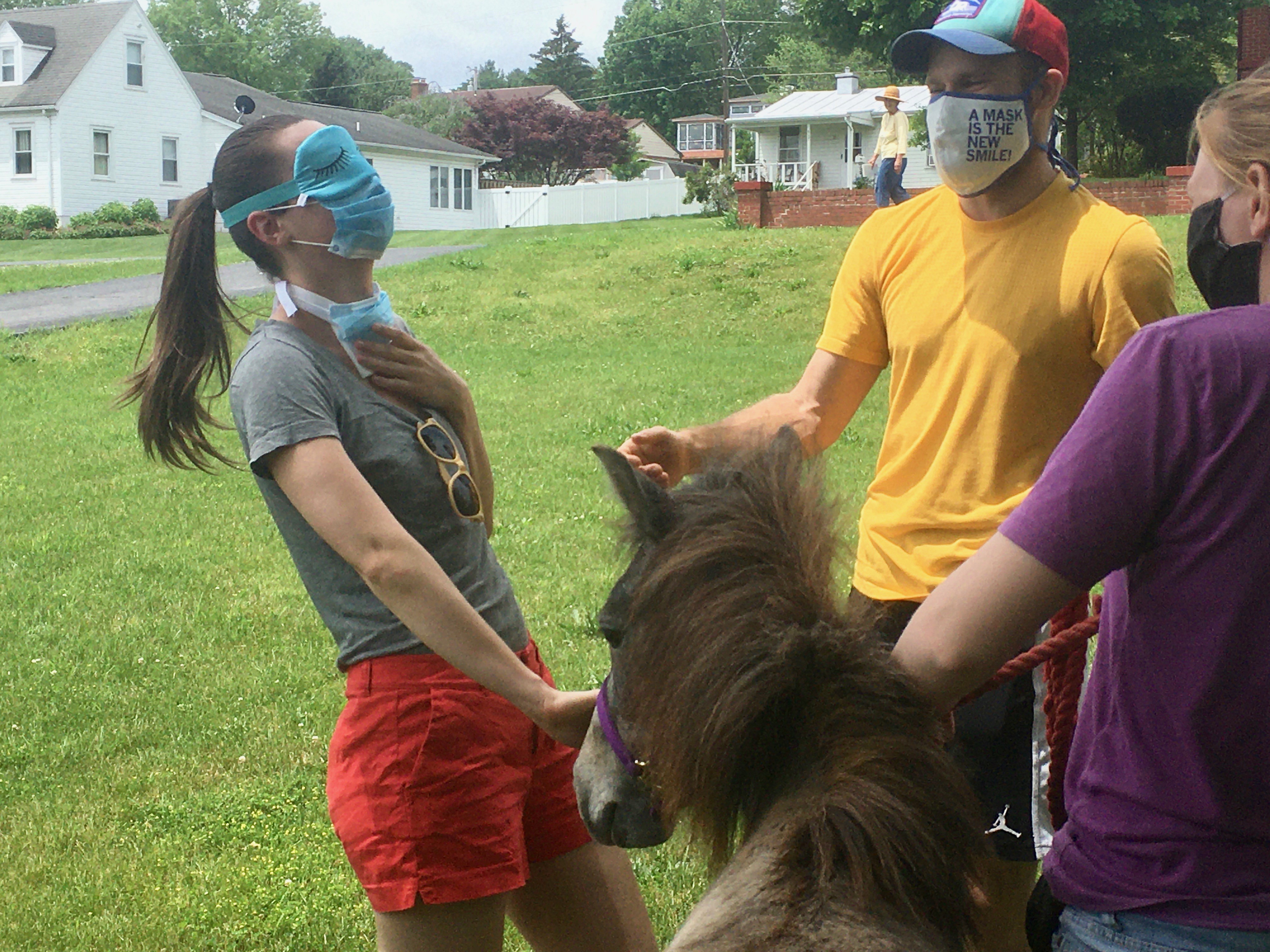 We didn’t linger long. It’s not like there’s anything to do with a pony besides brush her and feed her grain, and besides, since we couldn’t see our friend’s expressions — she had a mask over her trach, a mask over her mouth, and after her blindfold came off, she wore sunglasses — I worried we might be wearing her out. When I emailed her housemate later to follow up, she assured me that everyone had enjoyed Ellie’s visit. 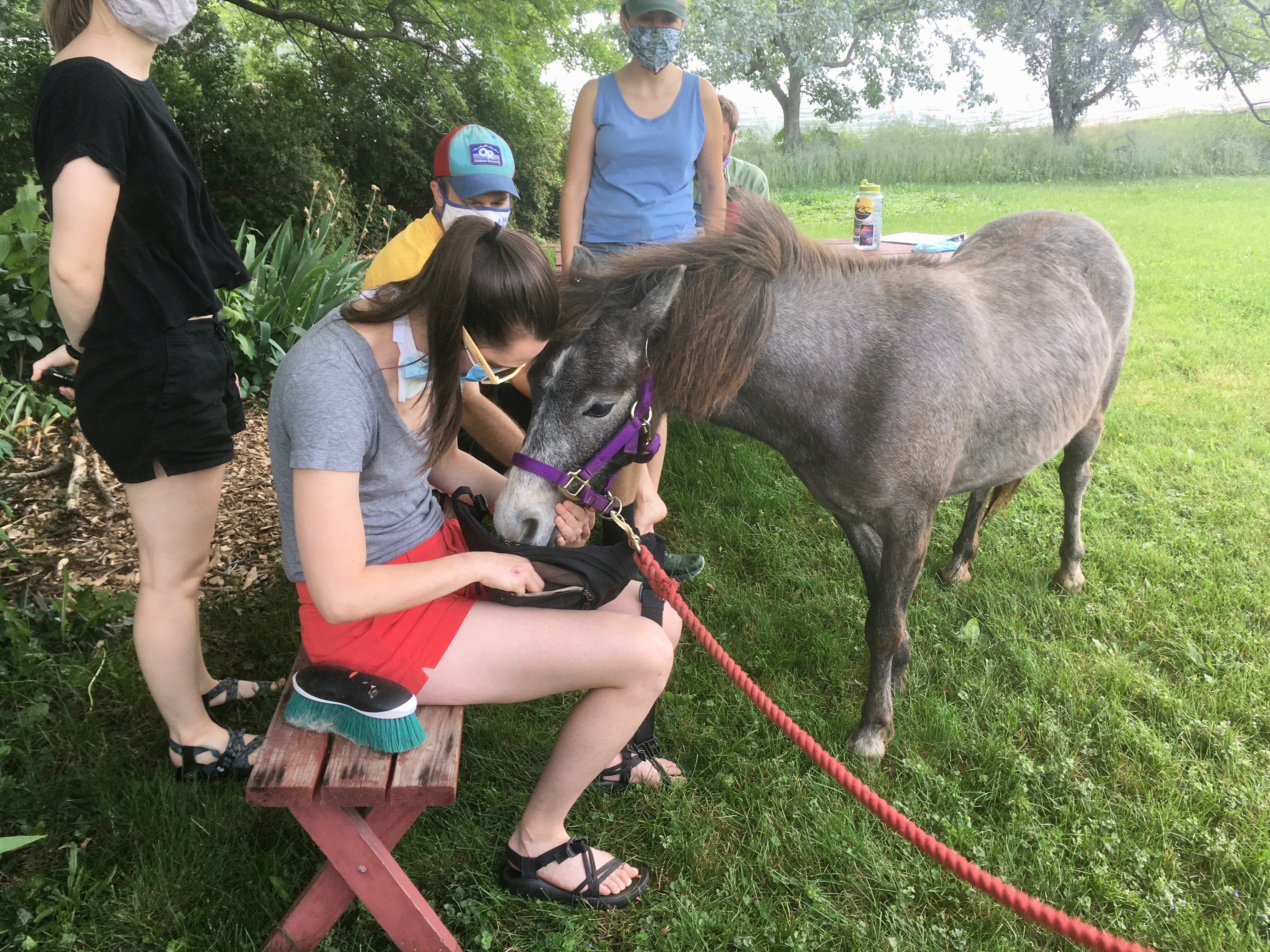 Which may have been true — I hope it is, anyway — but somehow I doubt anyone could’ve possibly enjoyed it as much as we did.

It was just the sort of adventure we’d been needing.

And finally, Julie’s back with a part two!

This same time, years previous: berries for supper, the quotidian (6.4.18), a better grilled cheese sandwich, when the studies end, on pins and needles, meat market: life in the raw, the best chocolate ice cream ever.