Finally, I’ve conquered pita. I am so proud, as in, puffed-like-a-pita proud. 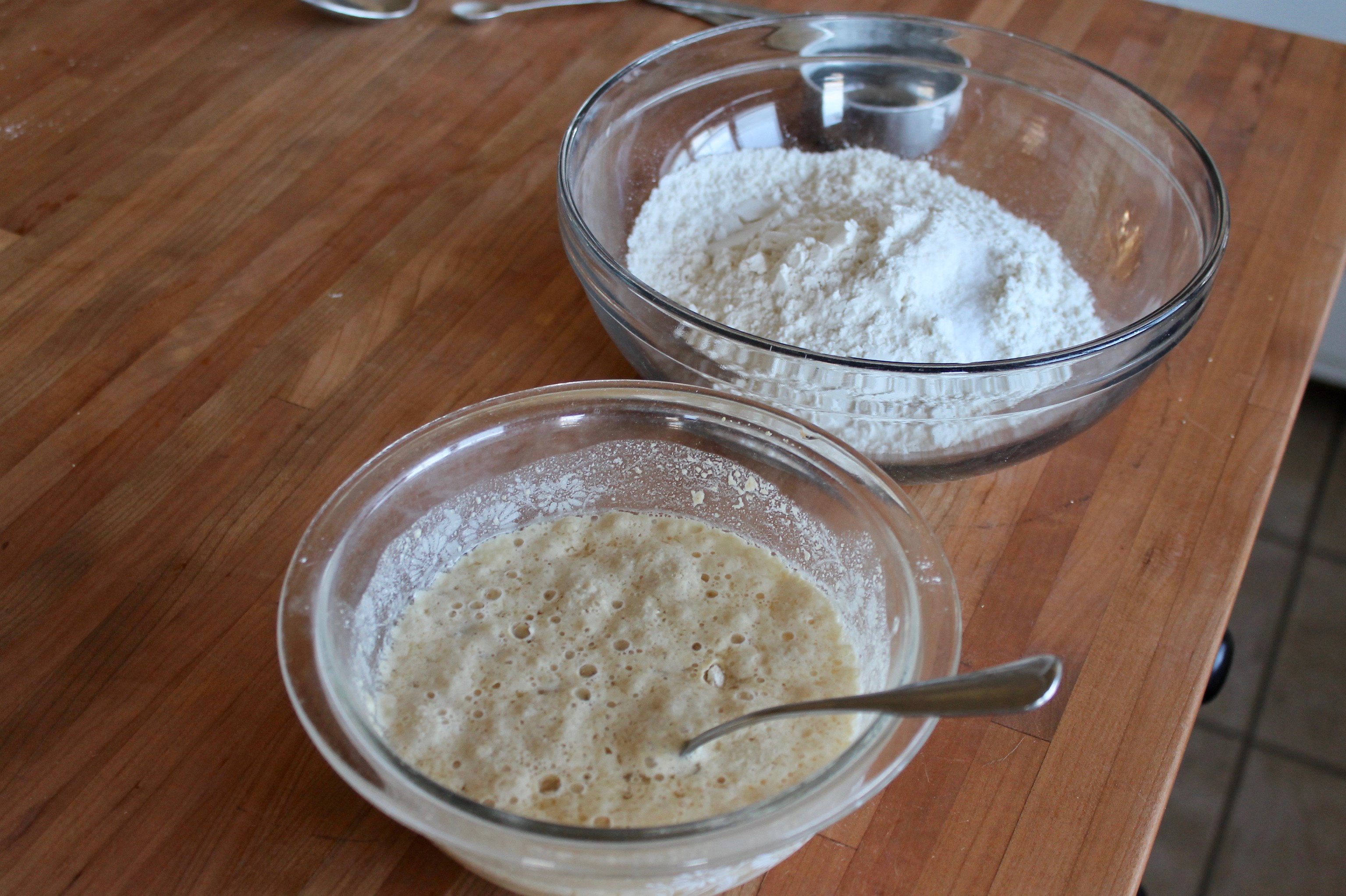 I happened upon the recipe by chance: one blogger mentioned a foodie youtuber and I clicked over and promptly fell down a rabbit hole, watching a whole bunch of his videos in one sitting (his unbridled enthusiasm kind of reminds me of Samin), one of which was all about his search for the perfect, creamy-smooth hummus. I made the hummus, and, while it was good — and some of the methods were downright brilliant (blend the unpeeled garlic with the lemon juice and then strain, toast the chickpeas with baking soda and then cook to remove the skins) — I still think the recipe needs more work (my main beefs: too much garlic, and the complicated skimming of the skins). His pita recipe, however, was amazing. 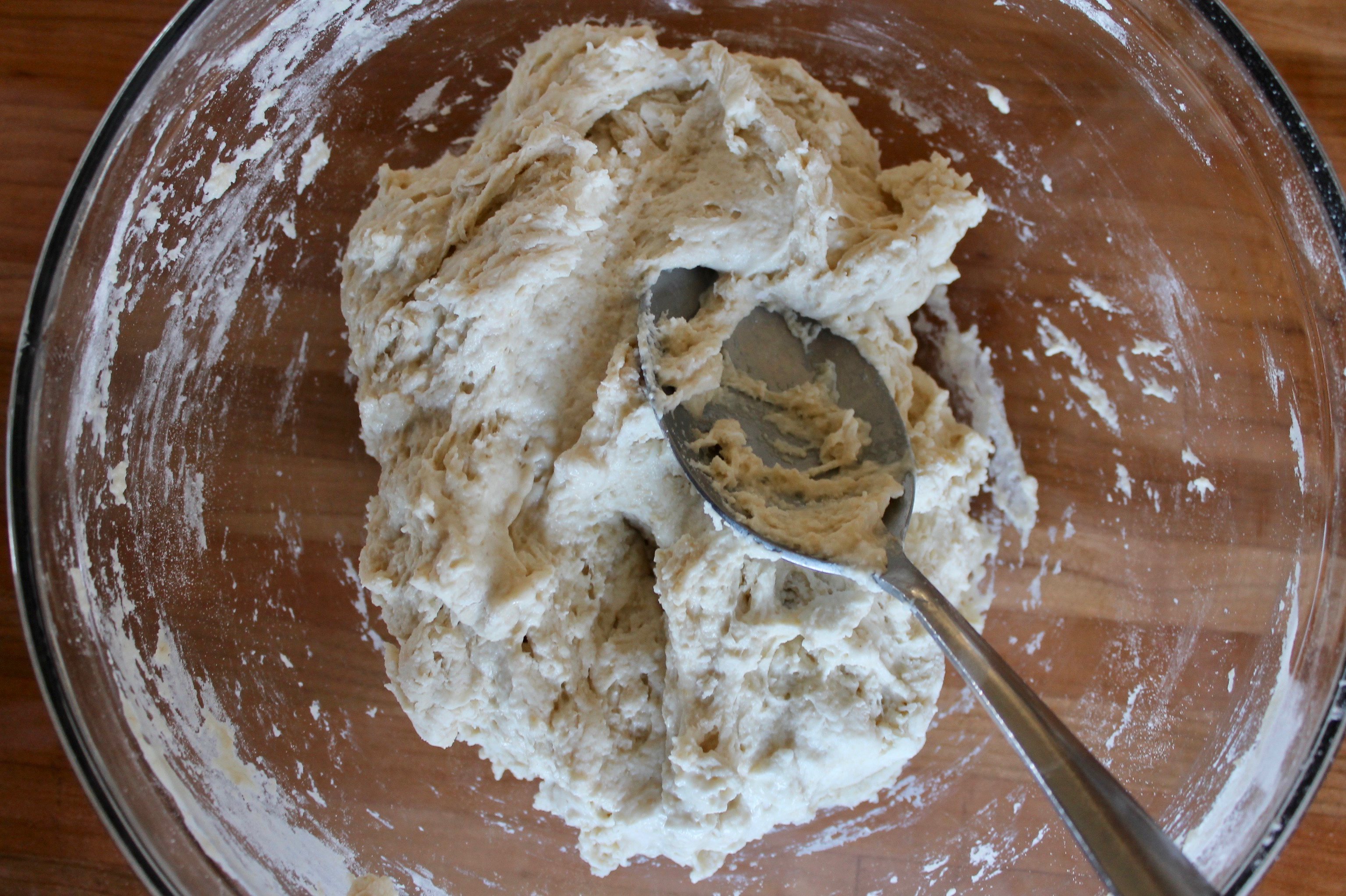 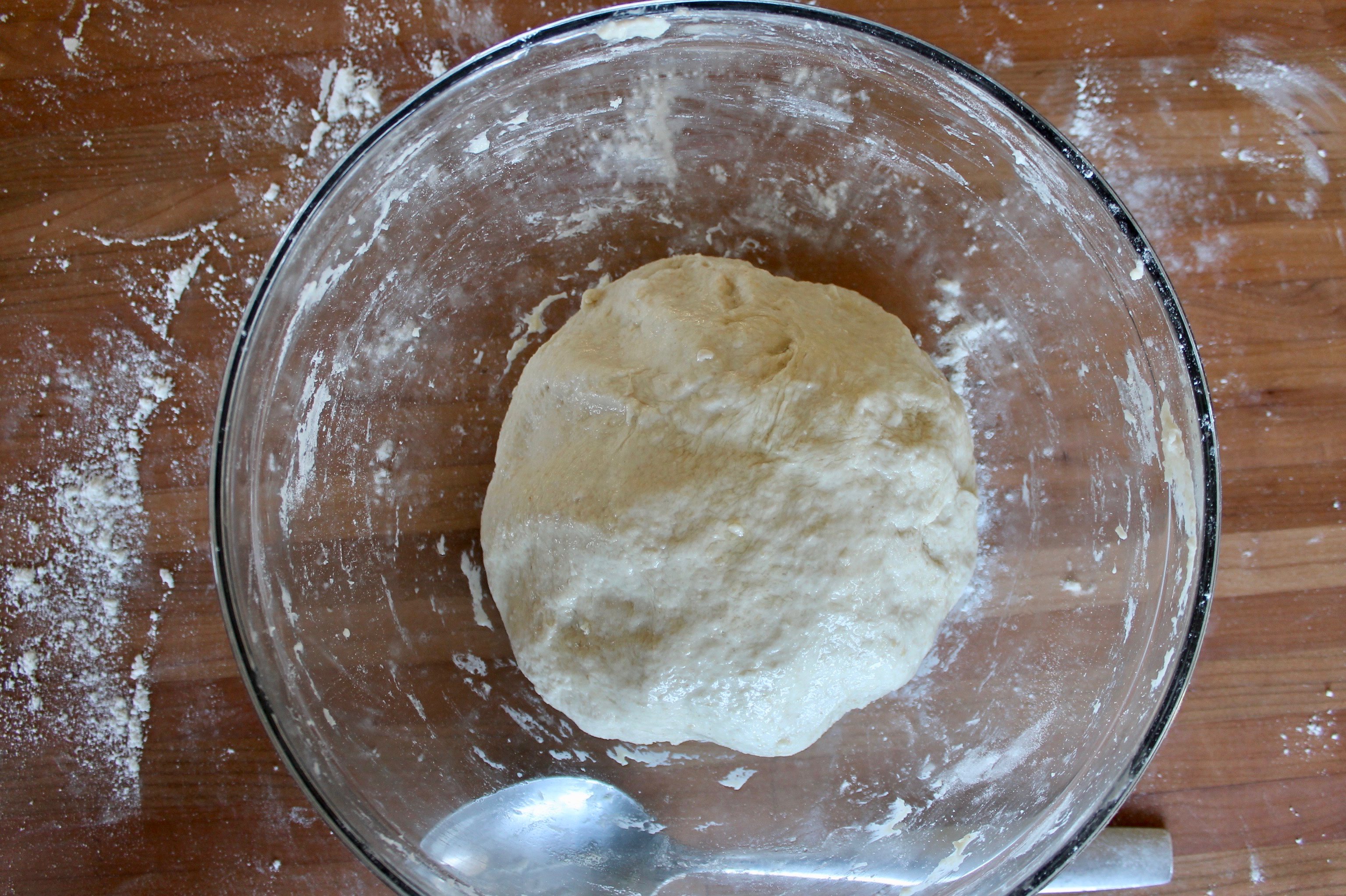 There’s nothing fancy about the dough — yeast, olive oil, a little whole wheat — but there are several different rising stages: the dough rises, the dough balls rise, and then the rolled-out pita rises. 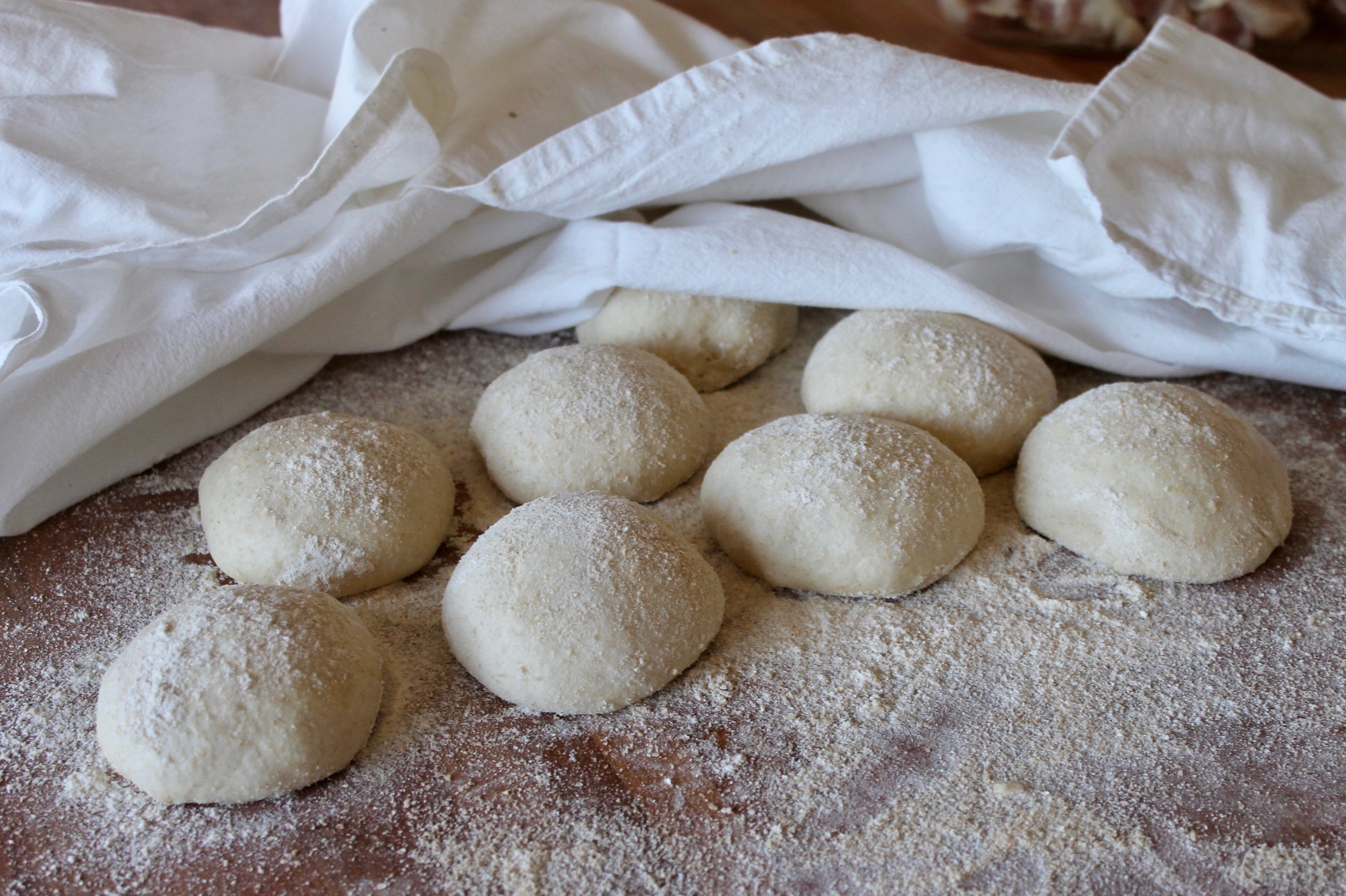 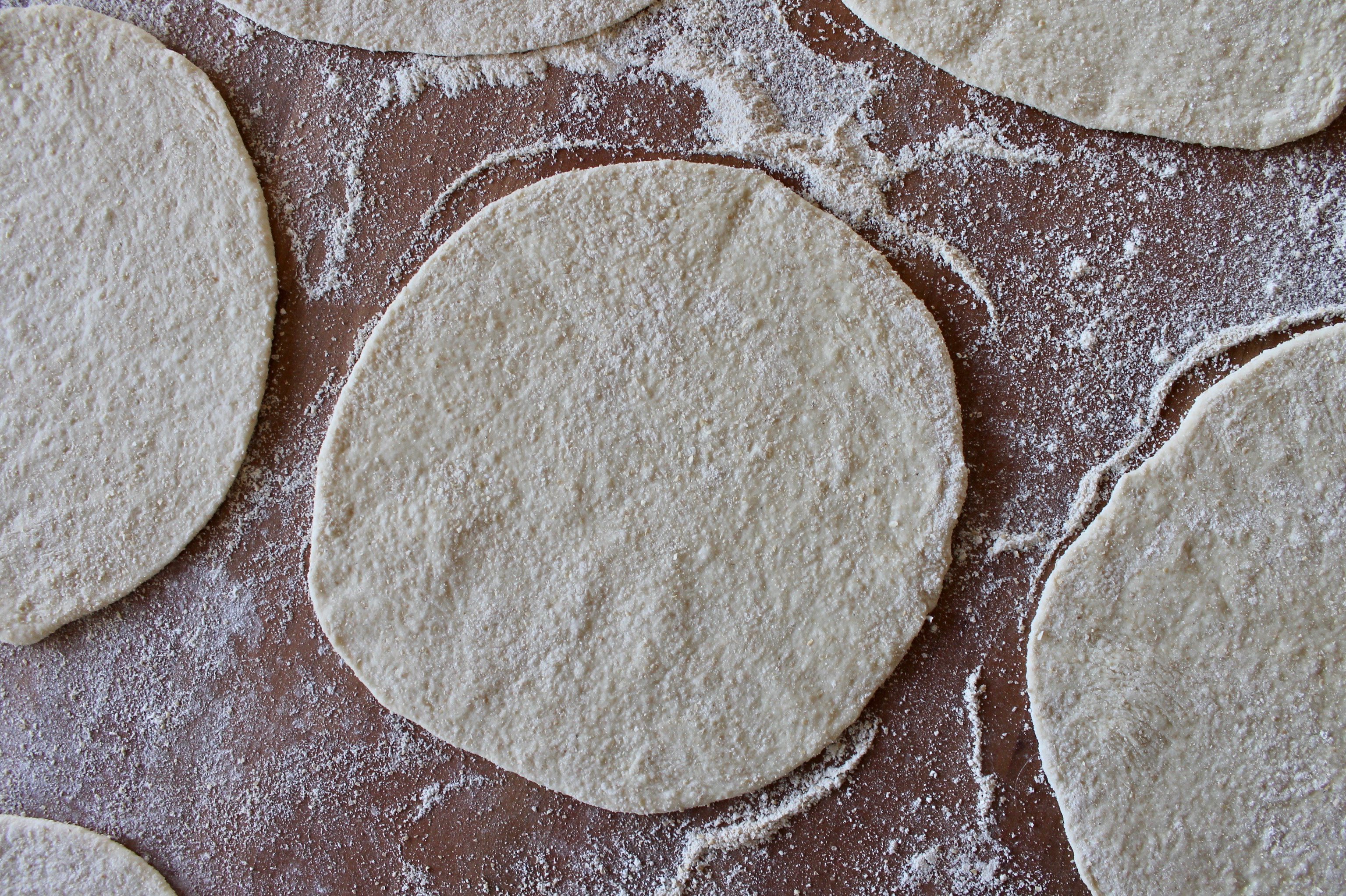 And then there’s the cooking, at which point (most of) the pitas swell right up into a glorious round ball, creating that ever-illusive and highly-coveted pocket effect. 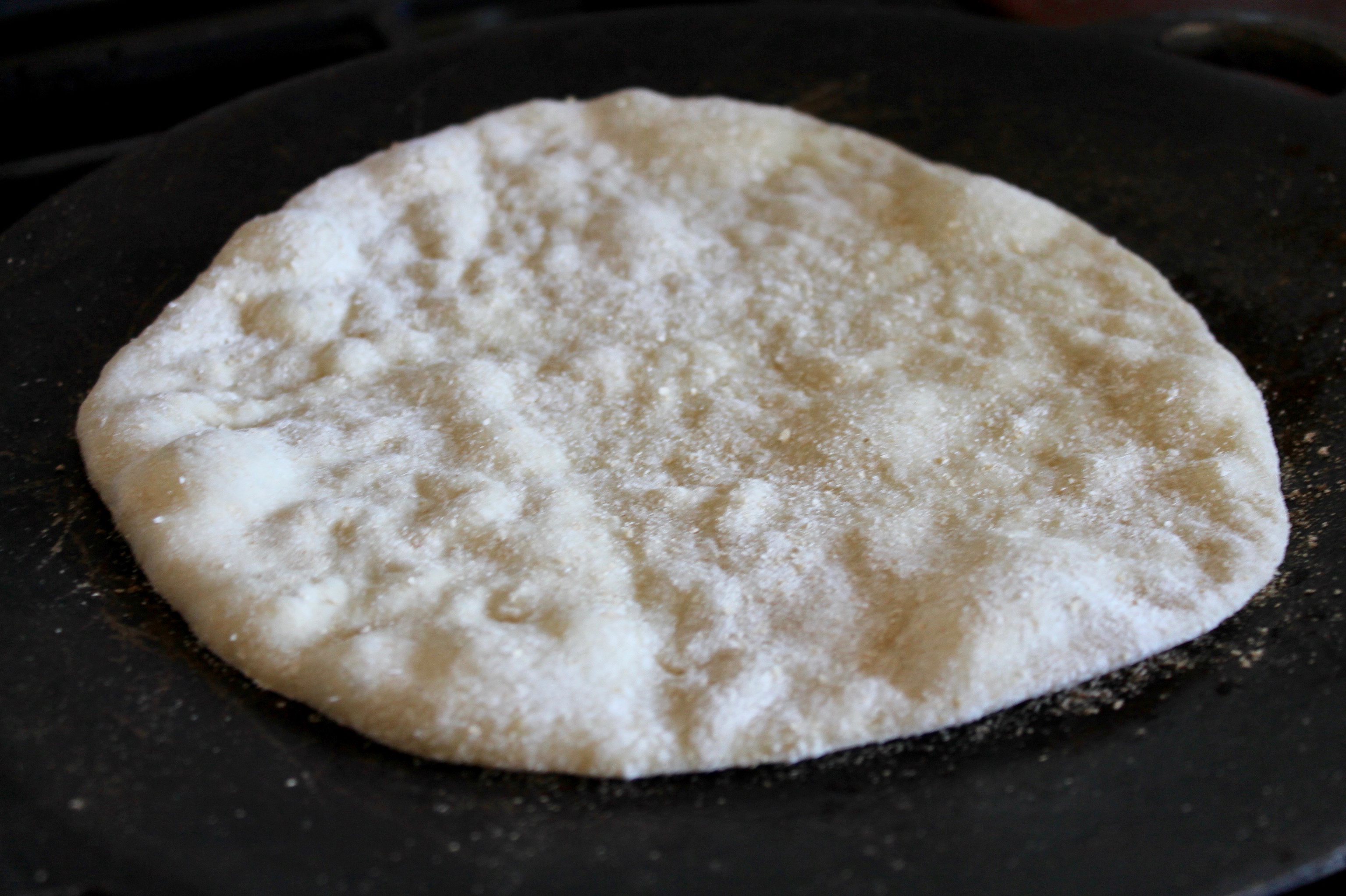 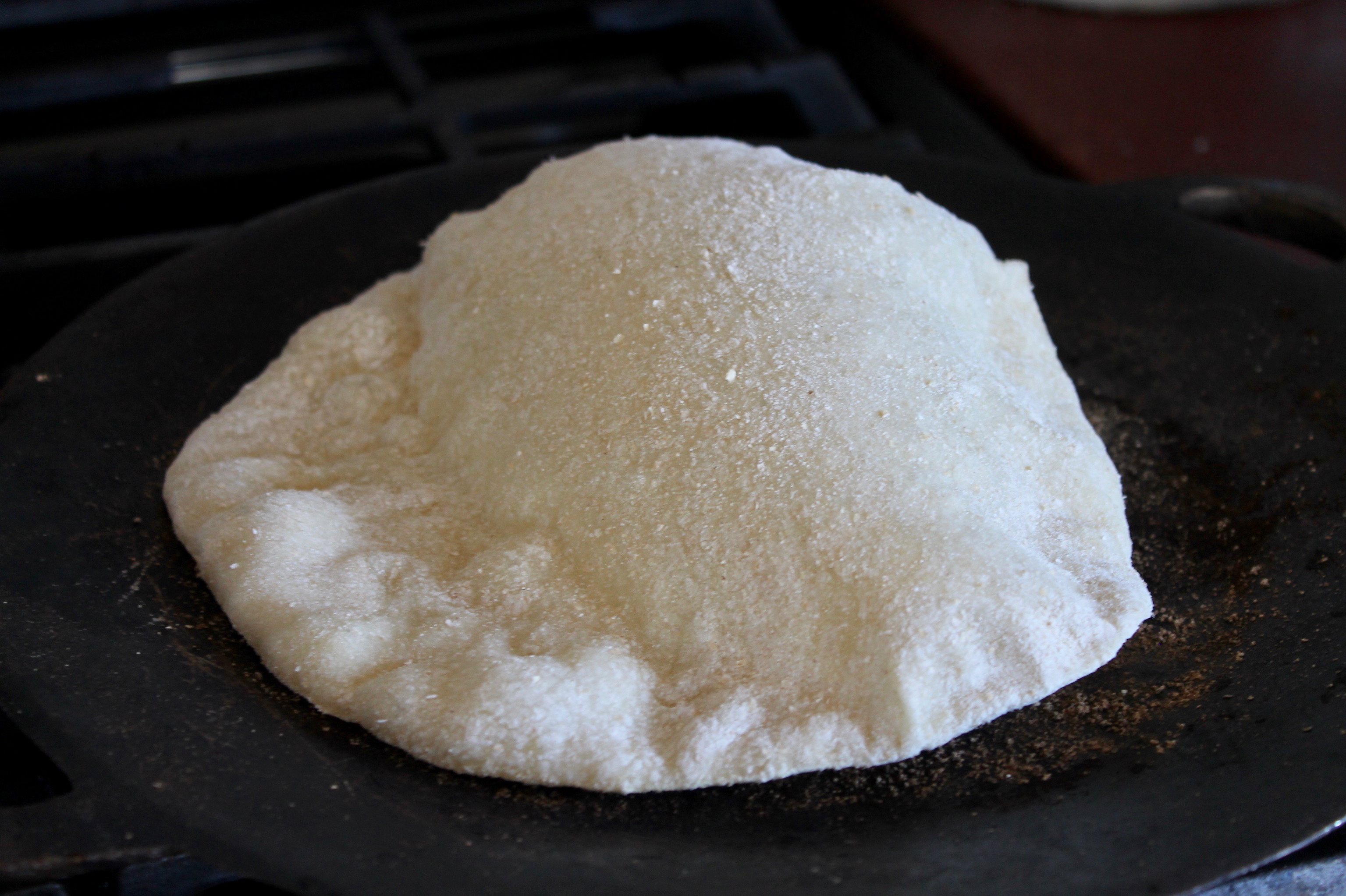 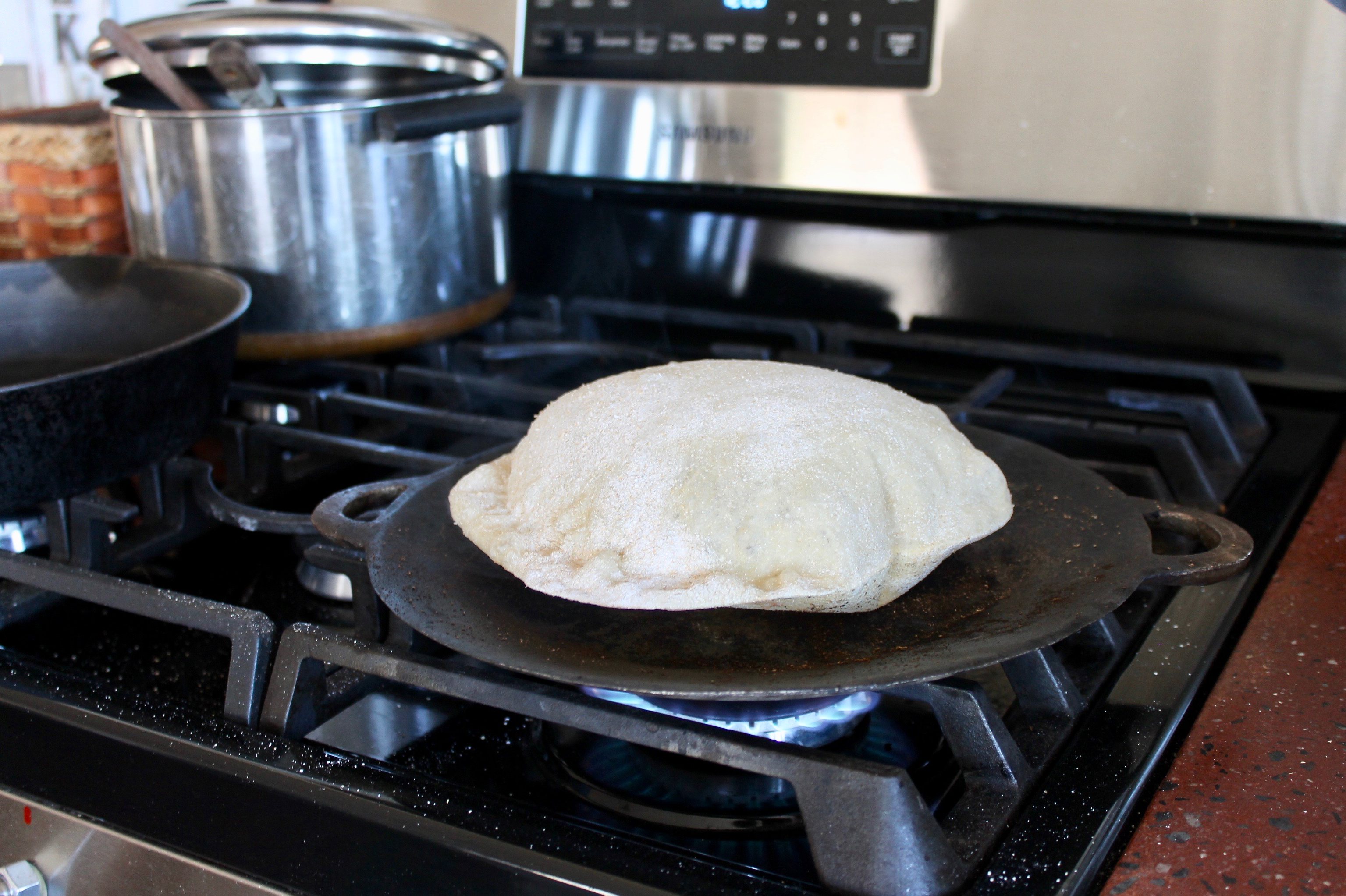 All that rising sounds complicated, but it’s not. Really, pita is the perfect background project while completing other kitchen tasks. In between kneading the dough and rolling it out and cooking it on the griddle, there’s plenty of time to grind coffee, chop veggies, boil some eggs, wash up the dishes, set the table, whatever. 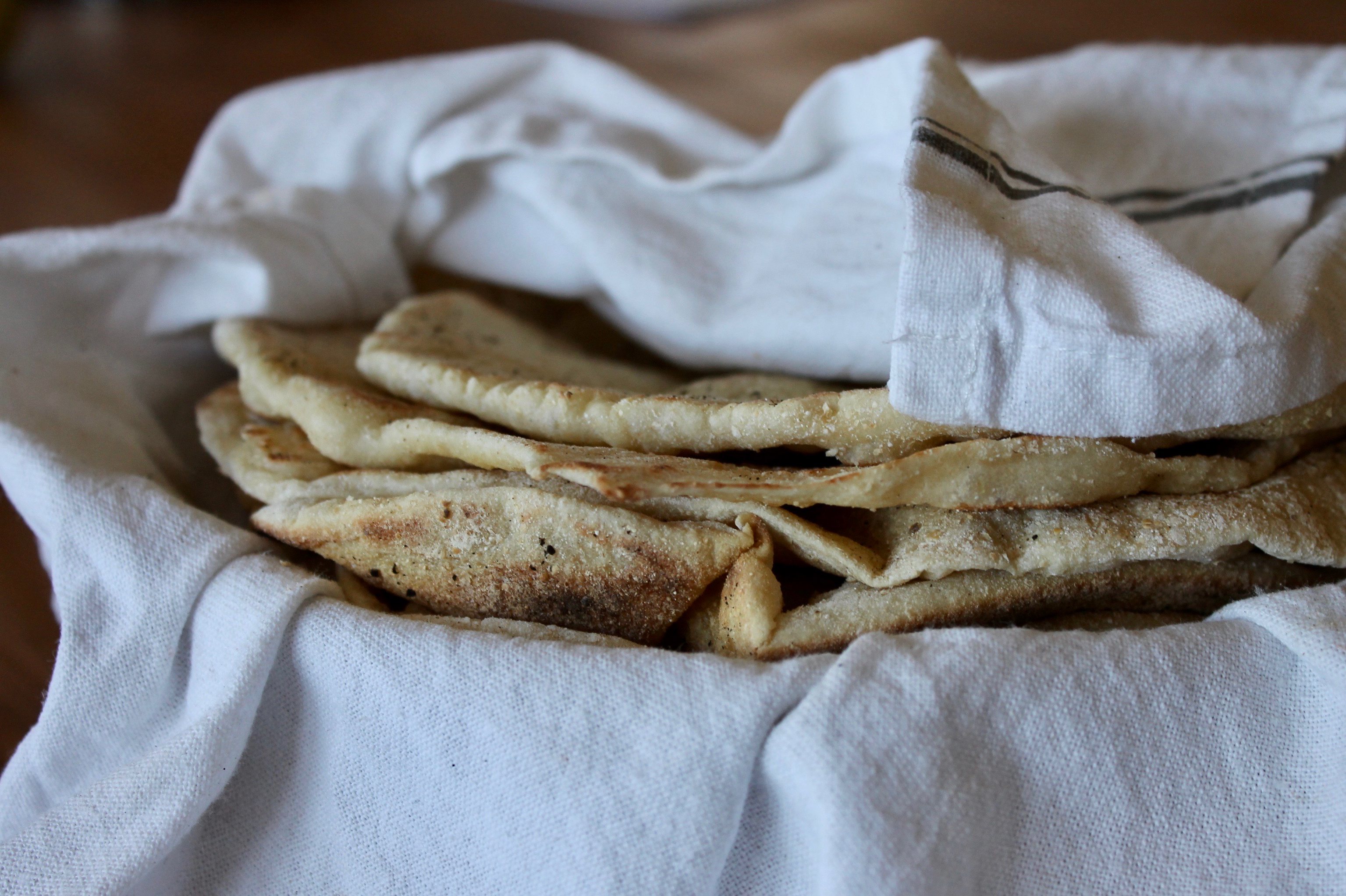 There’s nothing quite like a towel-lined basket filled with steaming hot, tender, gently-puffed pitas. You gotta try it. 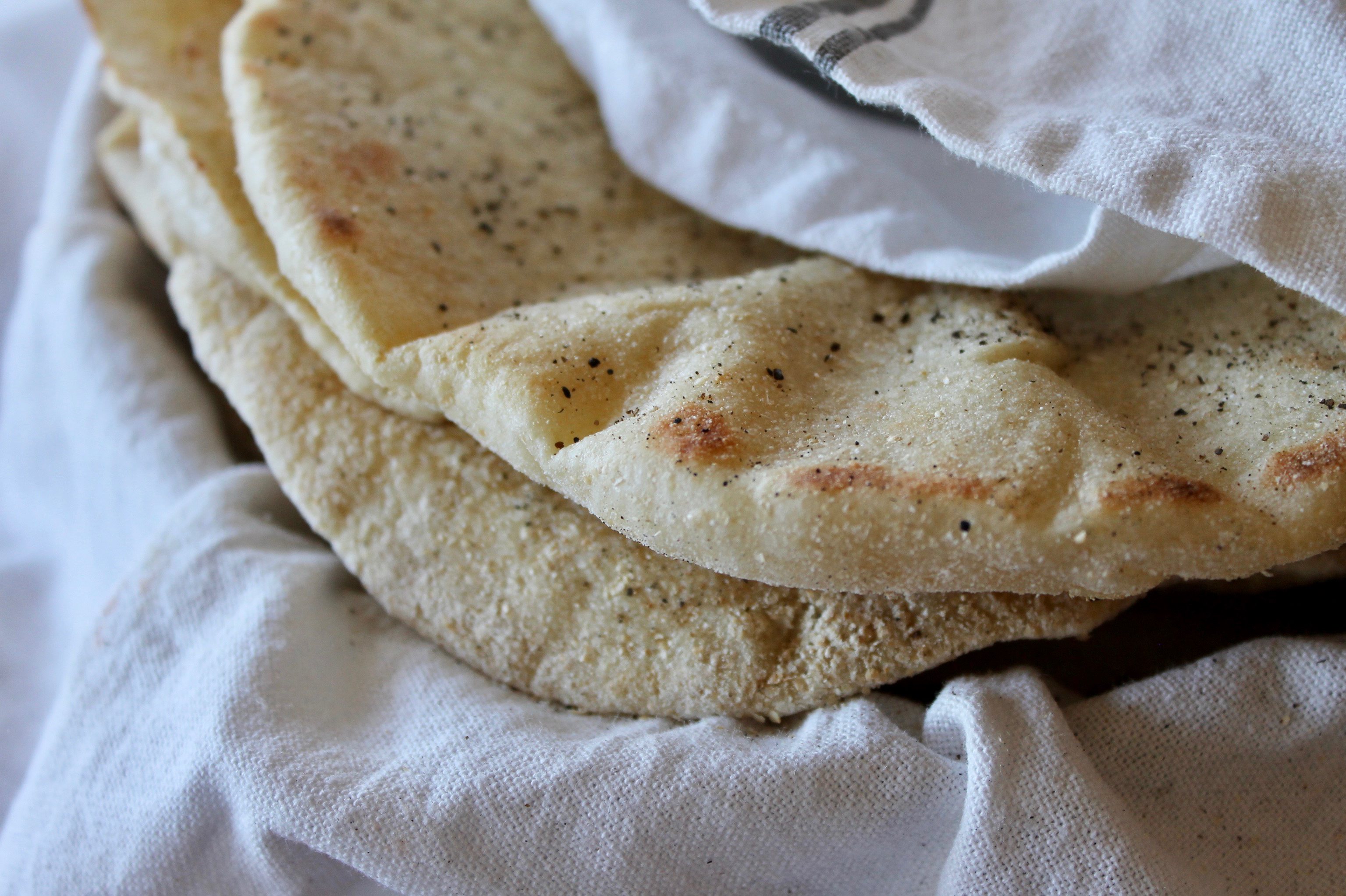 Perfect Pita
Adapted from My Name Is Andong.

In a small bowl, stir together the whole wheat, oil, sugar, yeast, and water. Let rest for 10-15 minutes.

Measure the flour and salt into a second, larger bowl. Add the bubbly yeast mixture and stir. Turn the dough out onto a floured counter and knead briefly. The dough will be sticky — knead quickly and try to refrain from adding too much flour. The wetter the dough, the more tender the pita. Place the dough into a lightly oiled bowl (the unwashed mixing bowl is fine) and cover with plastic. Let rise for one hour.

Turn the dough out onto a floured surface, divide it into eight pieces, and shape into balls. Flour the tops again and cover with a cloth. Let rest for 20 minutes.

Roll out the pitas into thin circles, about ¼-inch thick. After you’ve rolled the first one, set the timer for 15 minutes and continue rolling out the pitas, keeping them in order according to when you rolled them out.

When the timer dings, place a comal, or cast iron skillet, over medium heat. Once the pan is hot, begin to cook the pitas, starting with the first one that you shaped and moving through the pitas chronologically. Gently lay a pita on the pan. After about three minutes, it should be nice and bubbly — if it worked well, you’ll have one big bubble — and the underside will be a speckled golden brown. Flip and cook for another couple minutes before transferring the pita to a towel-lined basket. Fold the edges of the towel over the hot pita to keep it warm, adding more pitas as they finish.

Serve hot, with hummus or curry, or with butter.

Store leftover pitas in a plastic bag. To reheat, spritz both sides of the pita with water and reheat on the comal until steamy hot and pliable.

This same time, years previous: the quotidian (2.27.17), Oreo, my new superpower, rise and fall, buttery brown sugar syrup and cinnamon molasses syrup, what would you say?, what I said, creamy garlic soup.