Remember how, after I got that new fridge, I was so excited because I got to put the old one in the basement and have two fridges?

It was real nifty.

And, it turned out, it was real good we had that second fridge, too, because shortly after, our little freezer died, the one that was packed to the brim with all our raspberries and strawberries. We’d just loaned our other little freezer-that-was-a-bit-bigger-than-the-small-berry freezer to my brother for him to put his four piggies in (that’s not a euphemism for anything — he really did have four stone-cold dead piggies to put in it), and the other two freezers — the one big chest freezer and the old upright — were pleasantly stuffed. So yay for the fridge freezer! We stuffed it full with all the berries and went about our business.

And then a few days (weeks?) later I went down to the cellar to get some apples (or a beer or something) from the fridge and noticed that the fridge felt warm and that, upon closer inspection — NONONO OH PLEASE NO — there was a trail of red juice trickling down the back wall of the fridge and all the way into the crisper drawers. I opened the top freezer and, sure enough, it was full of bags and boxes of soggy-boggy berries.

In a royal snit, I called my husband at work and then, as per his infuriatingly calm instructions, I slammed everything onto trays and stuffed them into the other freezers, and then, when everything wouldn’t fit, I called him back and told him in no uncertain terms to COME HOME AND FIX THIS PROBLEM NOW.

He did: he came home and then, upon learning that a co-worker had an unused freezer we could have, he went to pick it up.

But it didn’t work.

So then I employed my brother’s help (he did have our other freezer, after all) and he poked around in his social circles and emerged victorious with an old upright freezer that we could have for keeps and, better yet, that worked.

For a few weeks, we were freezer stable. It was nice.

But then this past week I noticed that the red raspberries from the chest freezer weren’t as rock hard as they should’ve been. My husband put a thermometer in the freezer: 20 degrees. By the next morning it read 29 degrees. It wasn’t a surprise, really — we had gotten the freezer secondhand sixteen years ago after all.

This time I was the one to head off to work and my husband got stuck with taking everything out of the chest freezer and stuffing it into the two uprights. Everything fit, but just barely. It was time to get a new freezer. My husband began obsessively researching freezers while I played mental tetris with our budget categories, trying to figure out where we’d get the money from, and concentrated on Eating Down the Freezers.

And then, just this morning while I was in town writing, my husband fixed the freezer!

“I found the problem,” he announced when I walked in the door. He waved a frayed cord in front of my face and my eyes about popped out of my head because just this Christmas — Christmas Day Night, to be exact — my cousin had had a house fire, thanks to a faulty freezer cord. And here we’d been with freezer with a faulty cord all along, GOOD FREAKING GRIEF. 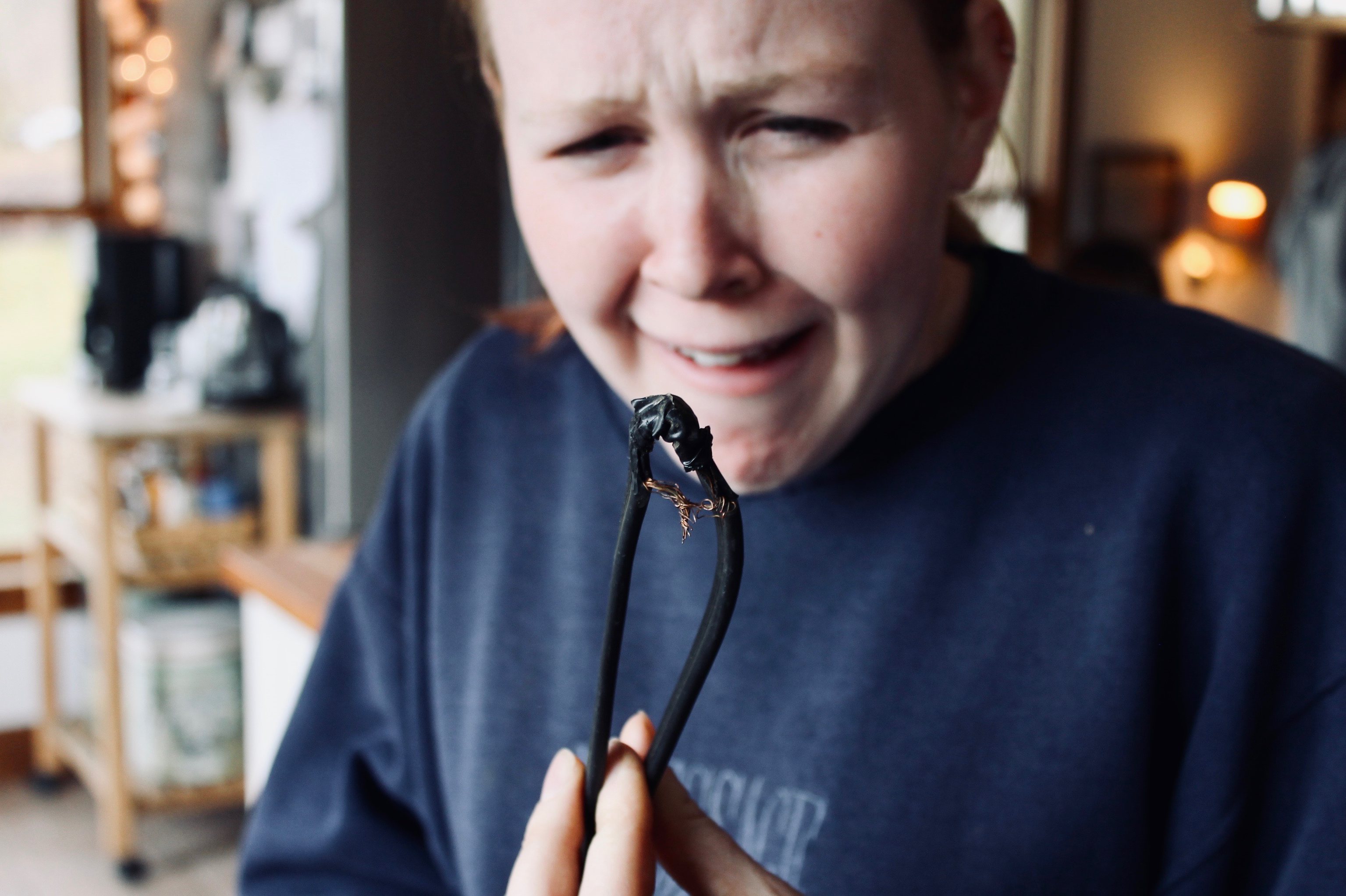 When we first got the freezer, the cord had been taped. This photo was taken after the freezer shorted out and my husband peeled back the tape to investigate.

(My cousin’s family all got out in time — thank goodness for fire alarms! — but their garage and laundry room burned, and the rest of the house had smoke damage. Our family gathering that was to be at their house that weekend got canceled. “Now we know,” I wrote to her in an email, “The extent you’ll go to get out of hosting the family gathering!!!”)

So it’s been a good day. My husband’s repair saved us hundreds of dollars and our house didn’t burn down, yay.

But all this freezer talk is just a preamble for: I made short ribs! 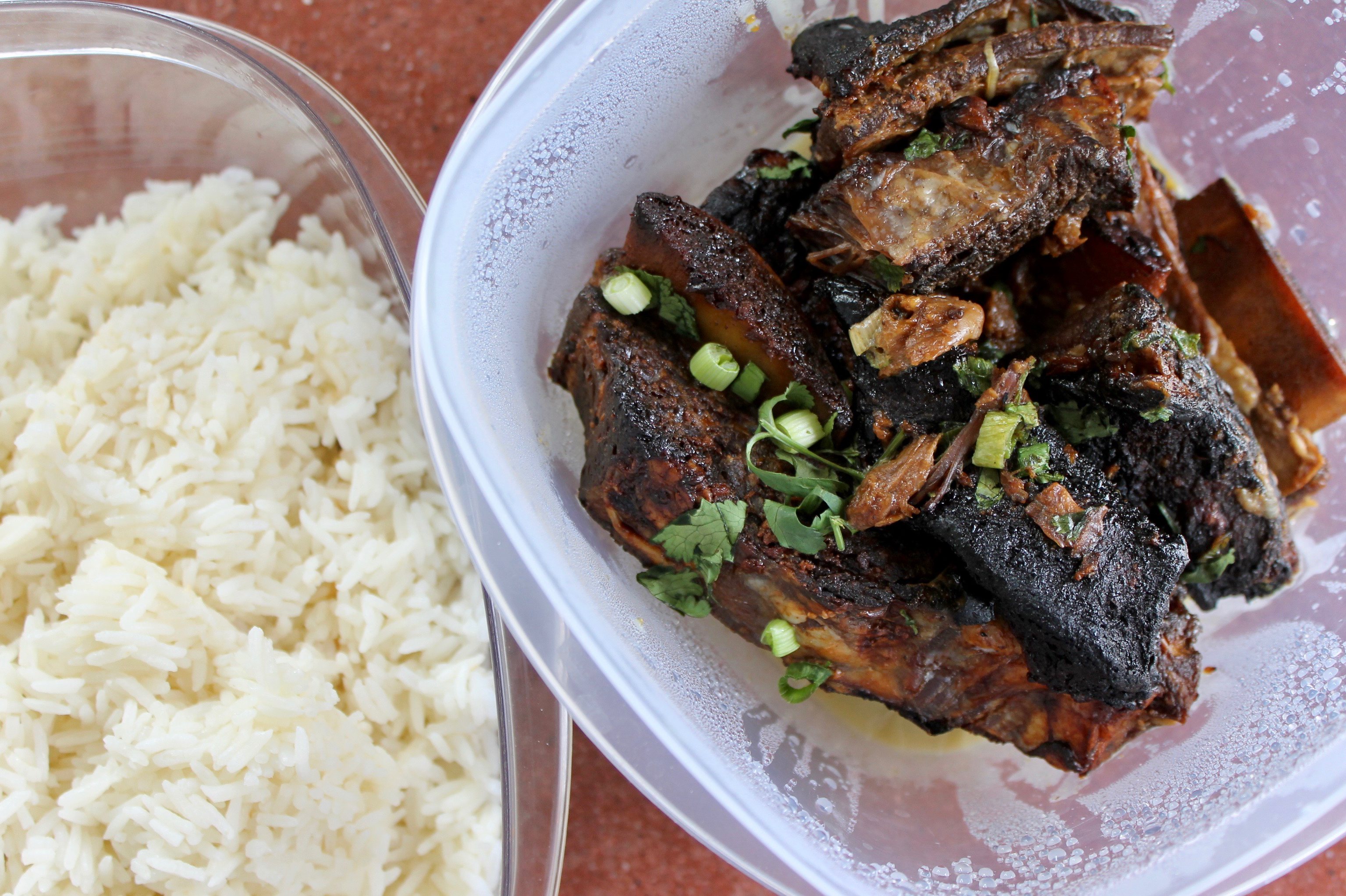 Confused? Here, allow me to connect the dots: With our freezers crash-and-burning right and left, I’d already been constantly thinking about what I could dig out of the freezer and cook next and then, one afternoon while watching an episode of Salt, Fat, Acid, Heat with the kids (my older daughter hadn’t seen the series yet so the rest of us are happily doing a re-watch), Samin’s soy-braised short ribs caught my eye. 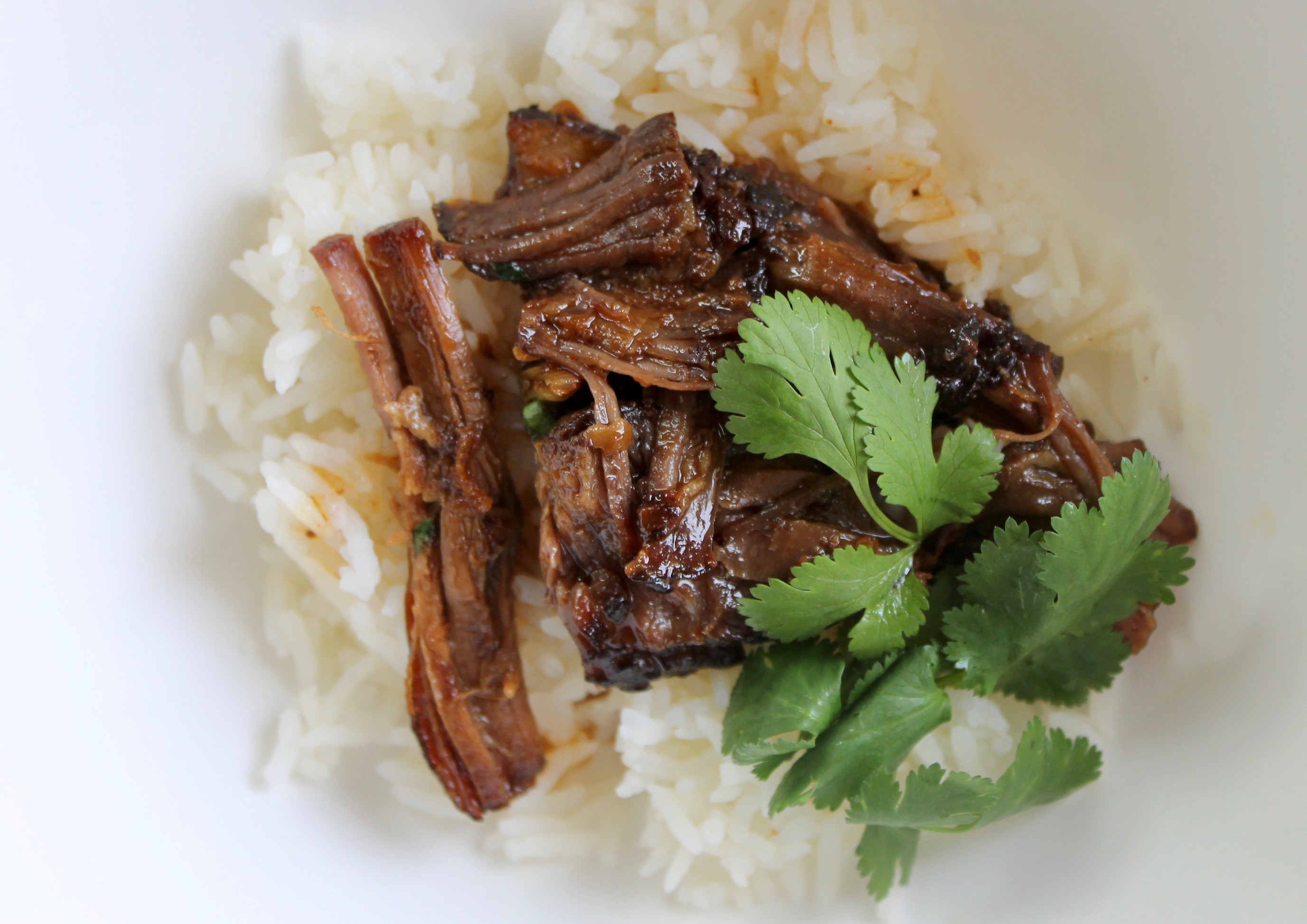 Long story short (though it may be too late for that), I made them and they were fantastic and now I know exactly what I’m going to do with the remaining packages of short ribs and I can’t wait, the end. 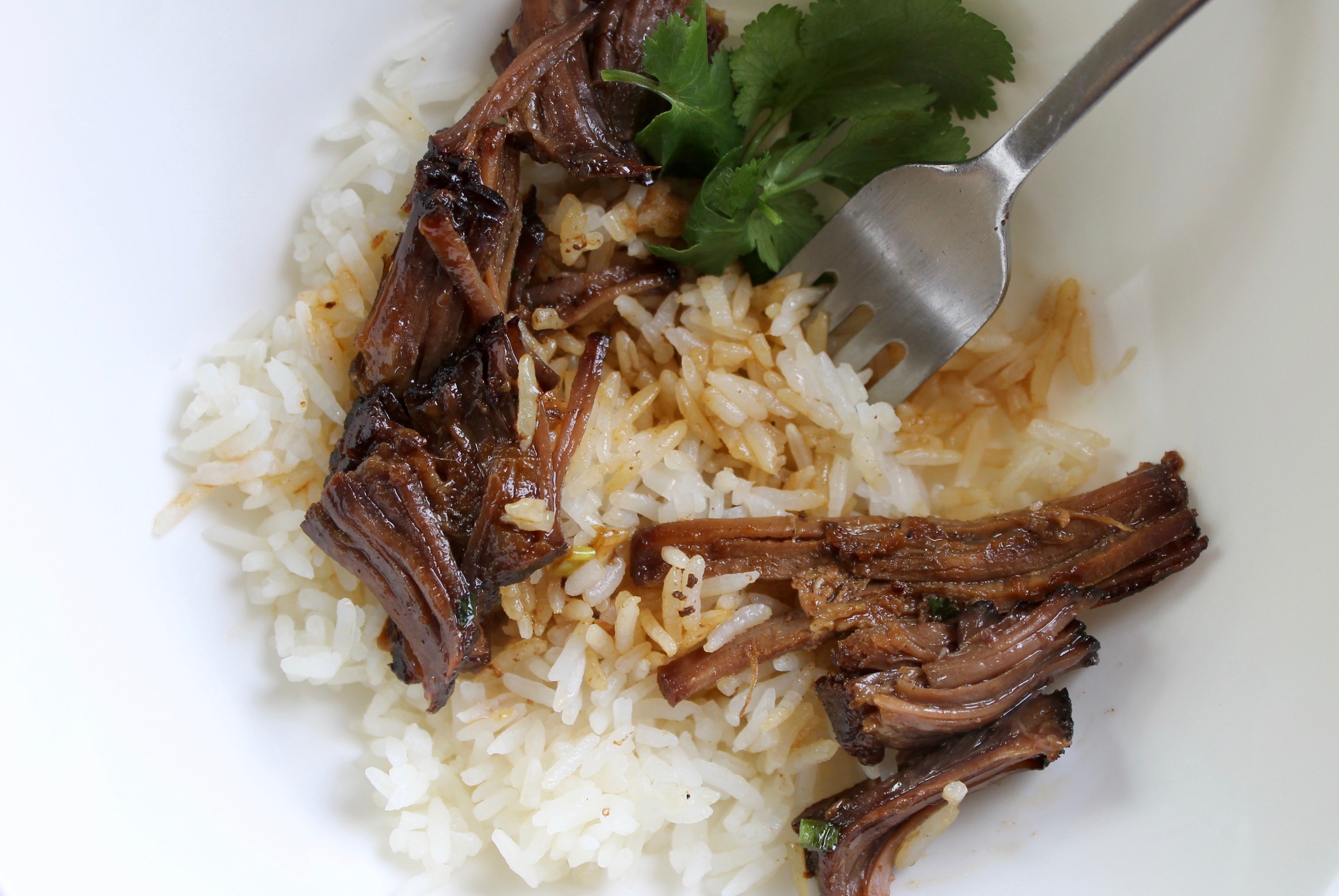 Samin’s Soy-Braised Beef Short Ribs
Adapted from her Salt, Fat, Acid, Heat Netflix series, and by conferring with the recipe that NPR’s On Point posted.

Samin says to salt the ribs and then add the marinade thirty minutes later. I salted the ribs and then, thanks to my sloppy reading, waited more than twenty-four hours. Worried they’d be too salty, I skimped on the soy sauce a little, but I shouldn’t have. The ribs were just fine.

Also, the recipe calls for five pounds of ribs but I didn’t weigh mine, and for dashi, a Japanese stock, but I subbed in chicken broth.

Salt the ribs and return to the fridge for 30 minutes to 24 hours.

The night before you plan to cook the ribs, stir together the soy sauce, brown sugar, mirin, garlic, ginger, sesame oil, and cayenne. Place the ribs in a sturdy plastic bag and pour the marinade over, squishing it around so it covers the meat. Place the bag of ribs in the fridge, flipping it over on occasion, if/when you remember.

About five hours before you want to eat, take the ribs from the fridge. Place a large stock-pot over medium high heat and pour in enough oil to cover the bottom. Working in batches, brown the ribs: about 3 minutes per side.

Place the ribs, bone side down in a single layer in a large baking dish. Deglaze the pan with a little broth and pour over the meat, along with all the marinade from the bag. Add enough chicken broth to go about three-fourths of an inch up the ribs.

Cover the pan tightly with foil and bake at 400 degrees for 30 minutes before lowering the heat to 325 degrees and baking for another three to four hours. Remove the foil, crank the heat up to 450 and bake for another ten minutes, or until the tops are toasty brown (but not burned, like mine were).

Sprinkle with lots of fresh cilantro and chopped green onions and serve with rice.