On Wednesday evening, three of my kids, my parents, and I attended our county’s board of supervisors meeting in which there was scheduled to be a vote on a resolution on whether or not to make our county a Second Amendment Sanctuary. Friends of ours, fellow advocates of stricter gun laws, planned to speak in opposition to the resolution, so, in solidarity with them, we decided to go.

On the drive there, traffic was bad. I joked that it was all the gun’s rights people going to the meeting, but then, when traffic stopped a couple miles before the school, we realized, Oh wait, all these people are going to the meeting. Mom suggested we turn around and go for ice cream since it looked like there was no way we were ever going to make it in, but the kids and I argued that if all these people were coming to support, then it was all the more important for us to be there.

Eventually, I managed to skip much of the traffic by driving beyond the school’s entrance and then turning around and entering from the other direction. At the front doors, we bypassed a man handing out orange GUNS SAVE LIVES stickers and went straight inside. The gym was already full, and by the time the meeting started, there was standing room only. 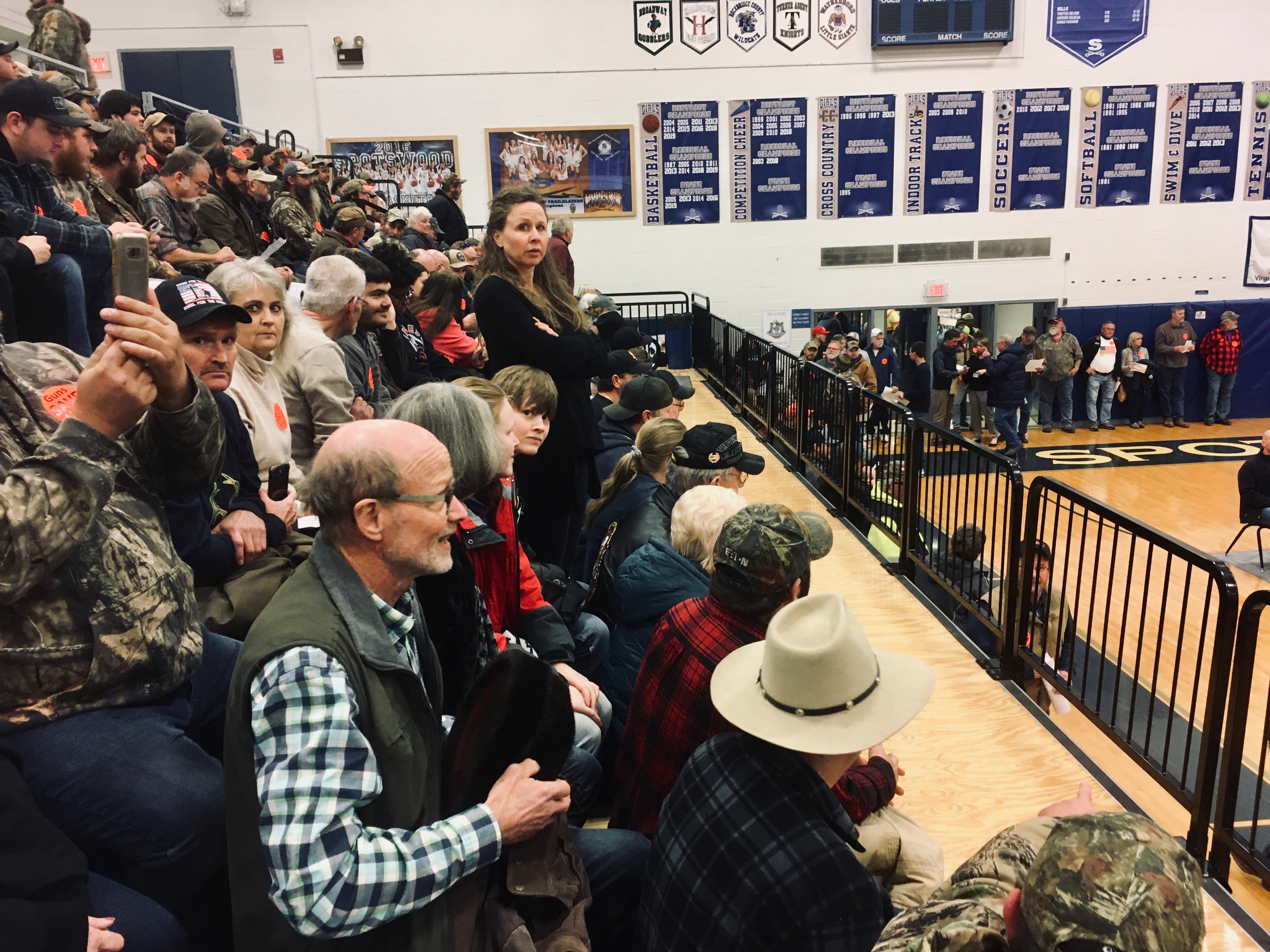 Those who wanted to speak (three minutes only) had to sign up. Do any of you want to say something? I asked the kids. It was a rhetorical question, but my younger son said, Maybe?

We talked it over. Should I? he wondered. I’m scared! And, What would I say?

I pointed out that hardly anyone was going to speak against the resolution — it was pretty much a done deal — but it’s always good to present different perspectives. Plus, I added, children need to be heard. What you think matters. For a few minutes, he stood there, quietly watching the crowd, waffling. Then suddenly, “I’ll do it,” he said.

From our perch in the bleachers, he carefully crafted a statement, first dictating it to me, and then copying it over himself, adding to it as he had more thoughts. Under his breath, he practiced reading it out loud. He folded it up and then unfolded it and re-read it, again and again. 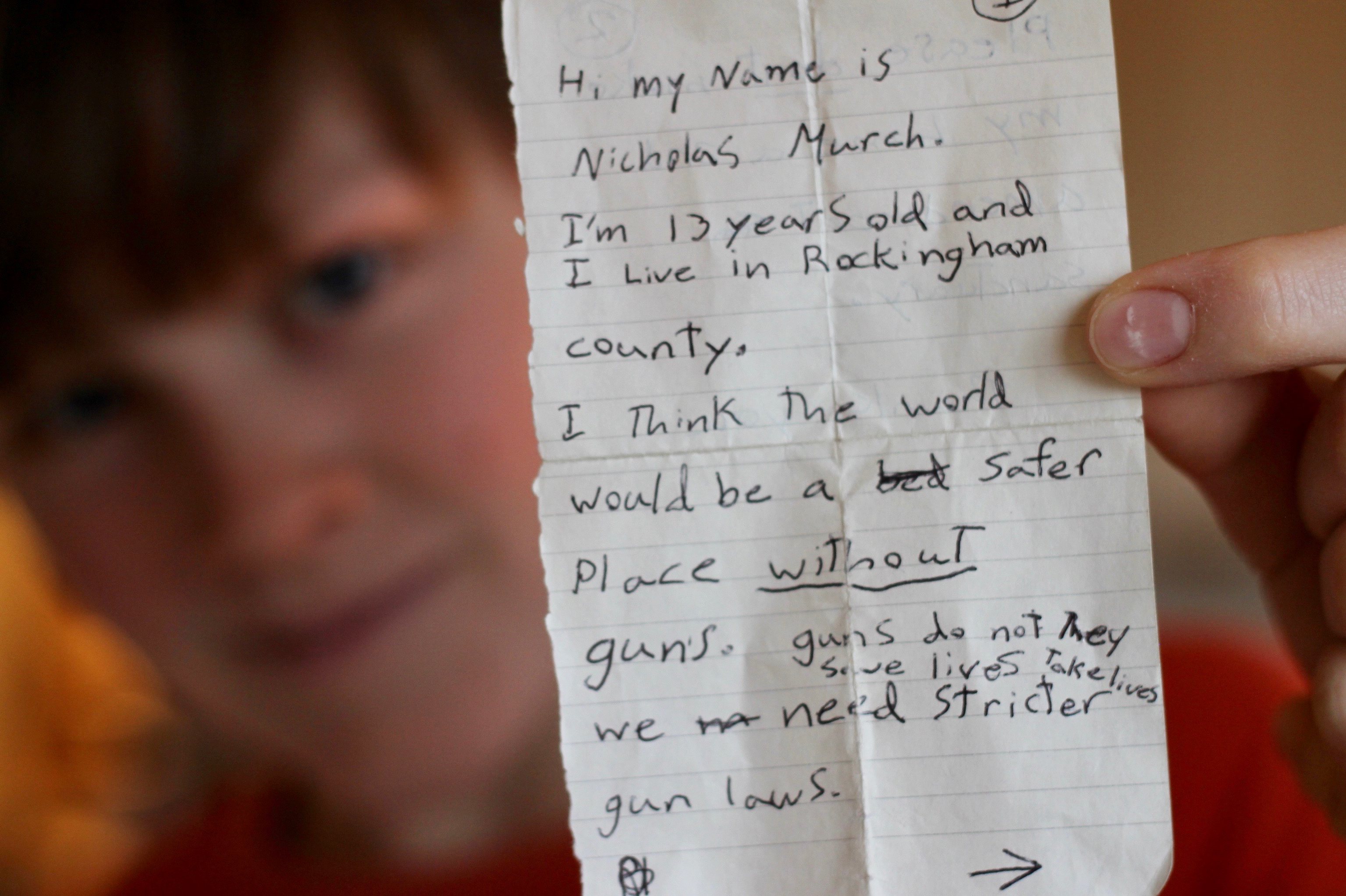 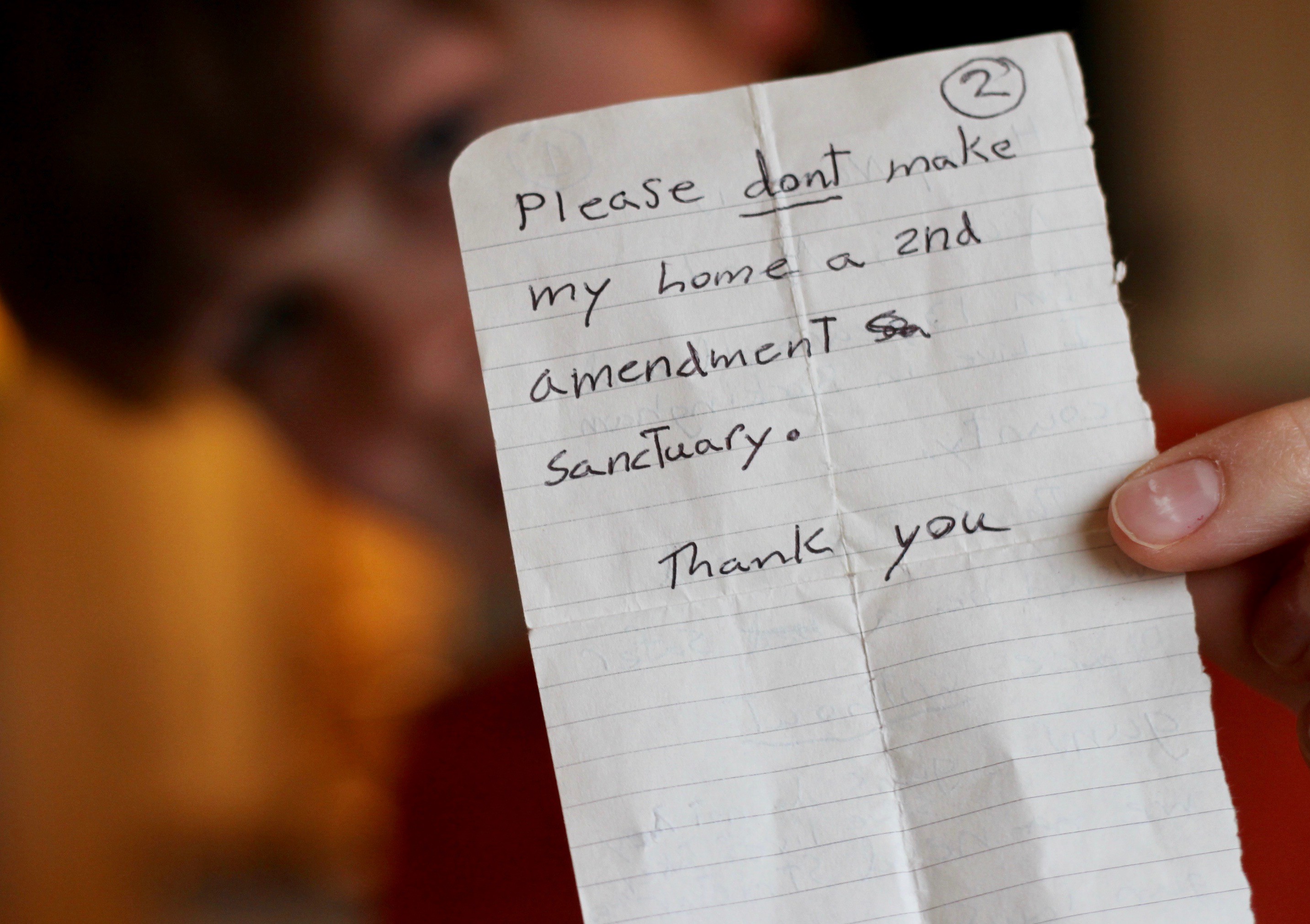 The meeting finally began. Person after person got up to speak before the board of supervisors, the crowd becoming more riled up with each gun-favorable declaration, leaping to their feet, waving their hats, and punching their fists in the air. One presenter called for a poll. Everyone opposed to becoming a Second Amendment Sanctuary, stand up. About a dozen of us stood. Those in favor? Three thousand people went wild.

After an hour of speeches, only one person — a Democrat leader who had given introductory opening remarks — had spoken in opposition to the measure, and then Ruth, our friend from church, got up to speak. The crowd cheered when she mentioned her gun ownership, but as she began to talk about life first, not guns, people turned aggressive. Go home! they jeered. Your time’s up. If you don’t like it here, leave! Move to Canada! Boo!

Incredible. Here were thousands of people who were passionate about their rights, and yet they were unable to extend the most basic right — the right to share a different opinion — to another human being. 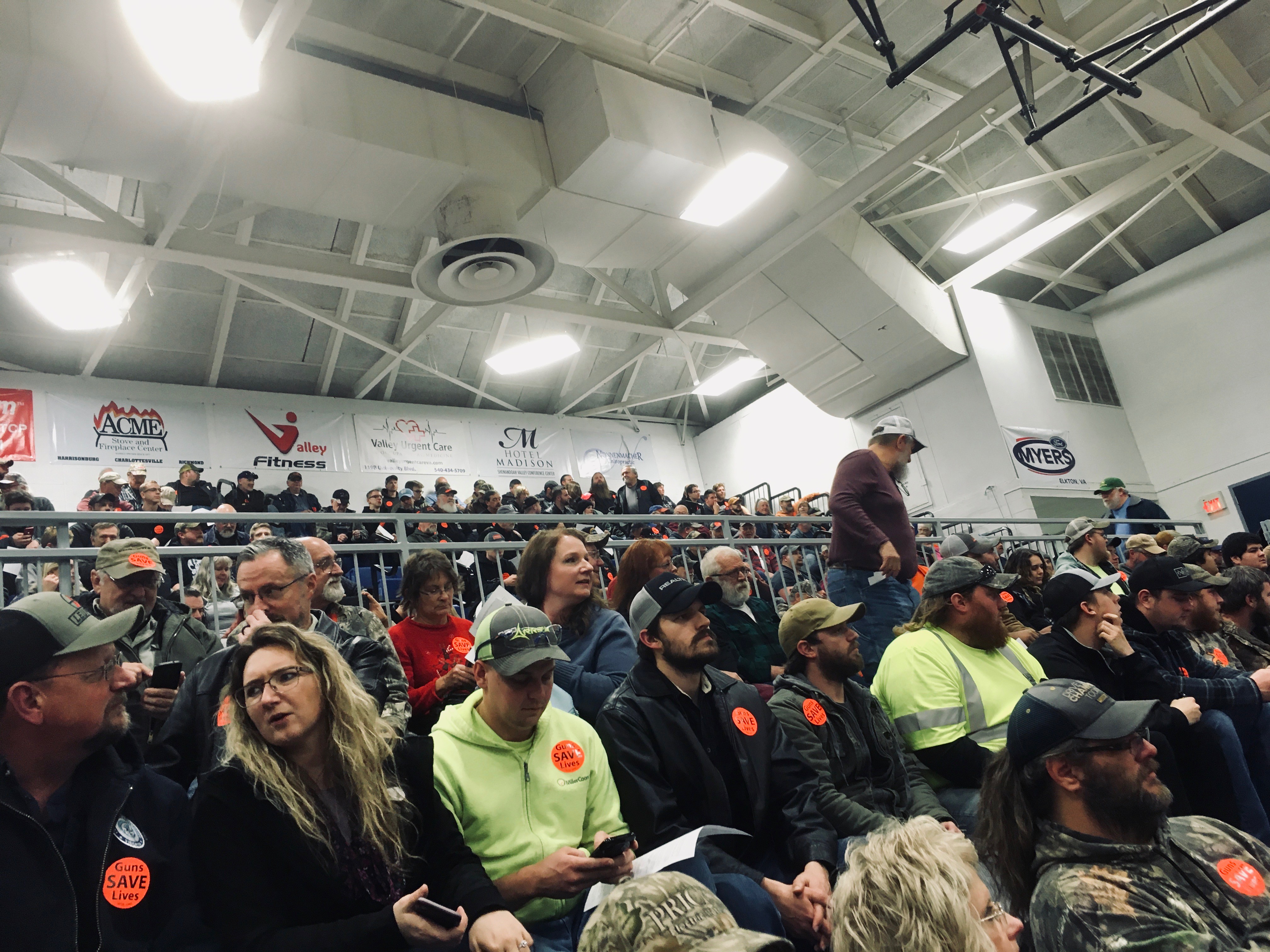 After several more people spoke in favor of the resolution, the crowd was in such an uproar that the board said they should just go ahead and vote now. Does anyone else have anything different to say? they asked, a question which tipped the room into chaos, some people requesting to speak, and the majority shouting them down.

“Do you want to talk?” I yelled over the din into my son’s ear. “Yes,” he said. “Then go now, fast,” and he, forgetting his request to have me accompany him, took off alone, shimmying his way through the press of bodies. A minute later, he reappeared on the floor down in front of us and walked up to the front where he stood, clutching his scrap of paper in his hand.

More speeches in favor of the resolution — there was talk of the endtimes, the tyrants in Richmond, God-given rights, “don’t tread on me” or else — and two more against, though we could barely hear what they said over all the heckling. 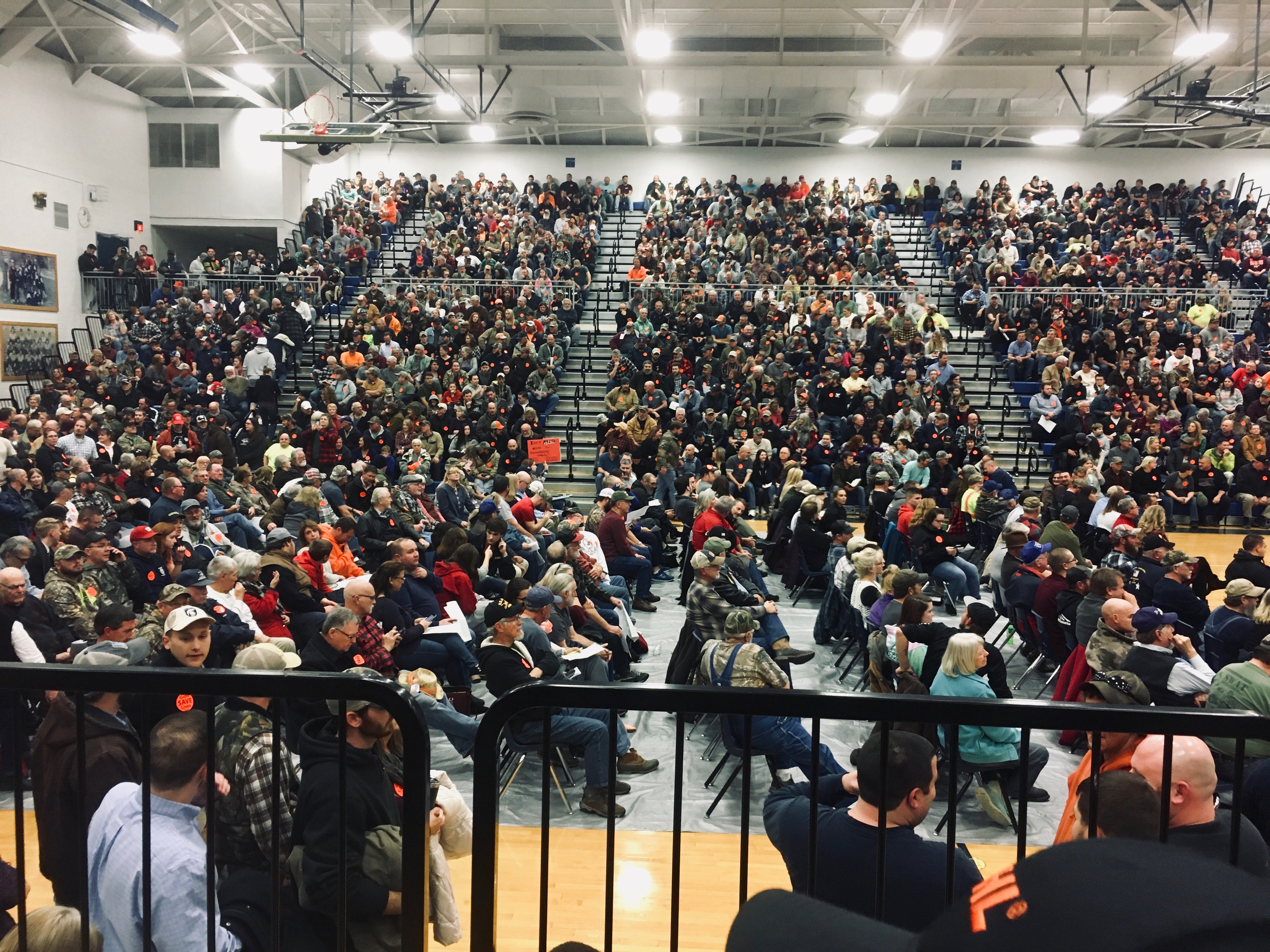 And then the board of supervisors decided they’d had enough; there would be no more speakers allowed. So my son never did get to speak, much to his disappointment.

We left then, before the vote — it was going to pass anyway — and before the traffic. As I gathered my things to leave, I felt a gentle touch on my leg. “Is that your son down there?” the man sitting next to me asked, pointing.

“Your son is a very brave boy.”

And just like that, I folded. My shoulders slumped, the air — had I been holding my breath? — whooshed from my lungs. This man saw my child, not as a threat, but as a person.

Once out in the cold night air, the kids exploded, their voices ragged with emotion. Since when was our right to bear arms mandated by God? I only saw three black people! Did you see the one guy blocking the man that wanted to speak?

“When Ruth talked about the value of red-flag laws, people laughed,” my older son said. “I could’ve cried!”

Did you see what they did to that woman? one of the kids asked. We’d all noticed the solitary young woman sitting on the other side of the gym, the woman quietly, steadily, holding up a sign of protest. Partway through, she left, and the kids saw a man crumble up one of her papers she’d left behind, and then somebody draped a pro-guns sign over her seat and everyone laughed.

“She had a small child with her,” my daughter cried, “a little girl, and they laughed at her!”

Listening to them, I realized the full magnitude of what they had just endured. They’d witnessed bullying, not just by one or two people, but by hundreds. In front of a throng of emotionally-charged people, they’d been singled out. I’d found the meeting fascinating — to me, it was an educational experience, a real-live study in human behavior — but to the children who are accustomed to thoughtful, civil discourse (in public, at least, if not at home, ha!), and who had made a sincere effort to understand all the arguments, the experience was deeply upsetting.

My older son, in particular, was dismayed (in his words, “sickened”) by the blatant disregard for reason. “It was like being in an auditorium filled with several thousand me’s when I was twelve years old and wanted an ipod and was obsessed to the point of irrationality.”

I tried to help the kids see the bigger perspective. Hundreds of people weren’t yelling, I said. Perhaps those people were as uncomfortable with the heckling and bullying as we were? And we saw people we know, right? Good people. Our neighbors. My mother pointed out that people occasionally called out the hecklers for their bad behavior, shouting “Let them speak,” and “It’s their turn now.” I told the kids about the gentleman with the kind eyes and the orange GUNS SAVE LIVES sticker who told me my son was brave.

That night I had trouble falling asleep, and the next day, in a Lenten planning meeting with our pastor, when I happened to mention that we’d been at the county meeting the night before and she, immediately concerned, asked what it’d been like, I surprised myself by bursting into tears. Apparently the experience affected me more than I’d realized?

And yet, in spite of all the negativity and ugliness, I’m so glad we went. I’m grateful that the children got to watch a small minority, themselves included, stand up for their beliefs in the face of overwhelming opposition. I’m grateful they got to feel, firsthand, the frightening force of an emotionally-charged, fear-fueled crowd. And I’m grateful they got to better understand this side of our community, our home; this is where we live.

P.S. For another perspective on the evening: A Crowd of 3000 Praises God and Guns Alike.
P.P.S. And here’s what Ruth said (thanks, Harvspot!).

Photo credits of the meeting: my older son