I’m not much for finicky cake decorating, but earlier this week, with my younger son’s birthday celebration looming — his real birthday was Sunday, but we wouldn’t be partying until Friday — I got an uncharacteristic urge. Maybe it’d be fun to do something a little more involved?

Along with a host of other off-handed suggestions, my son mentioned a snake. The idea lodged in my brain. A snake, with its low center of gravity and streamlined body, seemed fairly simple, right? Plus, since my son is the youngest, the pressure was off. No other children would be coming up through the ranks demanding a similarly fancy cake come their thirteenth birthday. Neat how that works, yes? So after a quick Internet search, I settled on a cake by Yolanda of How To Cake It fame.

My son said that he wanted chocolate and not white icing and please, no weird experiments. Fine, I said, it will be chocolate, but no promises on the icing and yes, this is an experiment and a surprise so that’s all I’m saying about that.

The poor kid’s anxiety shot through the roof. He still had lingering PTSD from The Picaken Fiasco of 2015, in which his birthday cake ended up in the compost (and then the dog ate it). 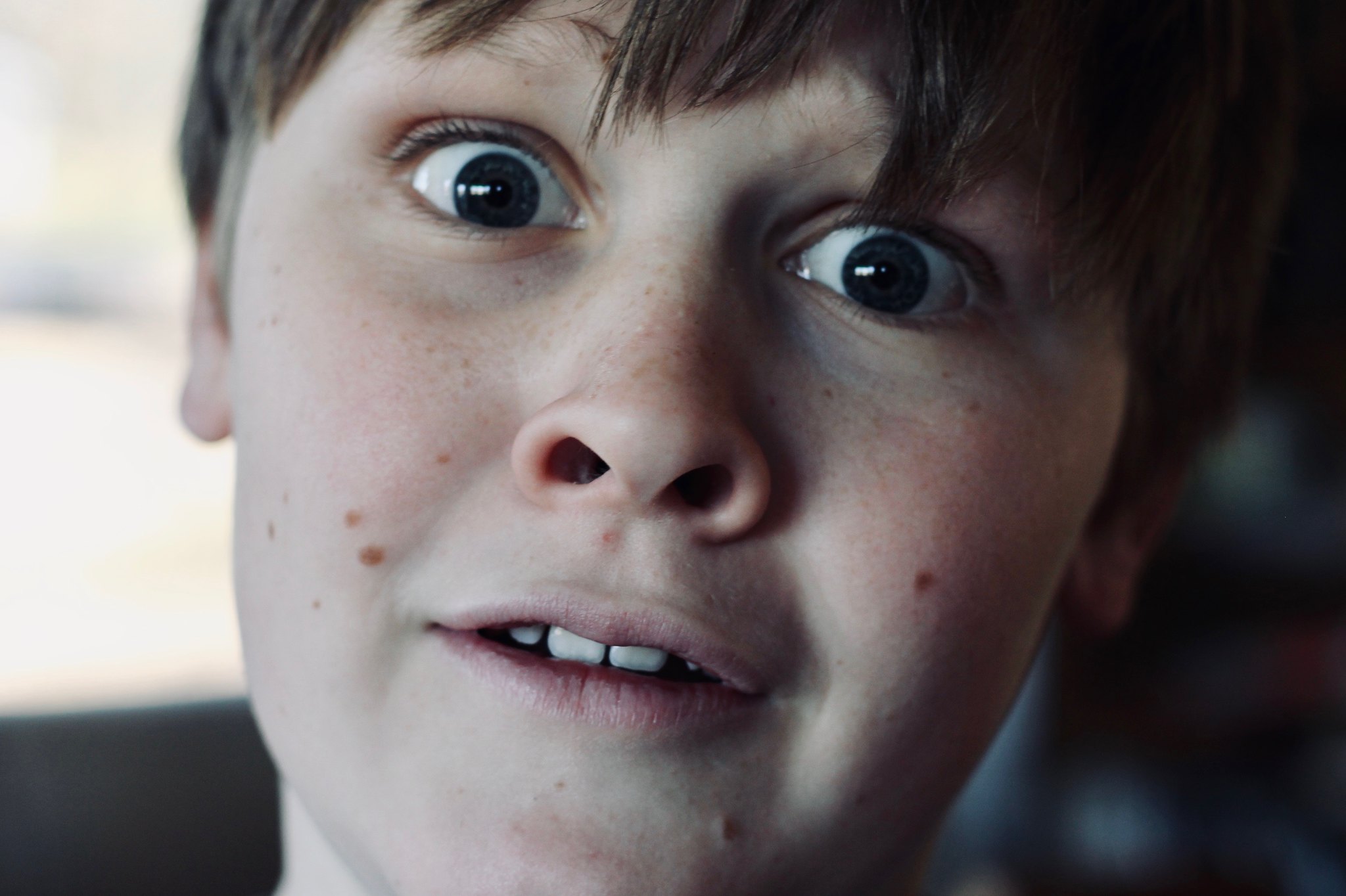 “Can’t I make a small cake?” he pleaded. “Please? Just in case the experiment doesn’t work?” 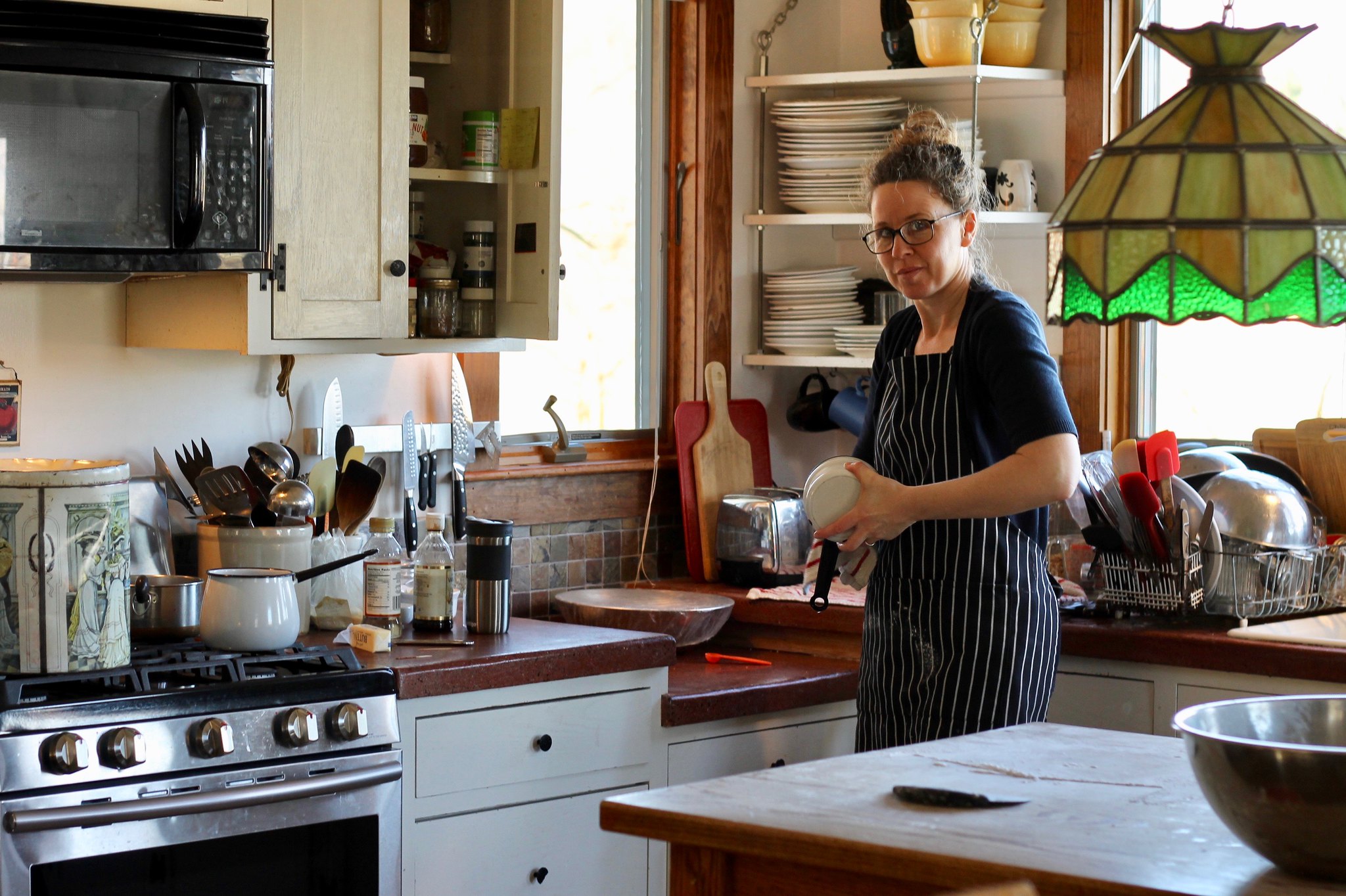 I made the chocolate cakes — four recipes worth — on Thursday, so he saw those. And then on Friday morning he saw me make the two batches of fondant and a fifth chocolate cake (and I made the coffee buttercream, too, but I don’t think he noticed that). 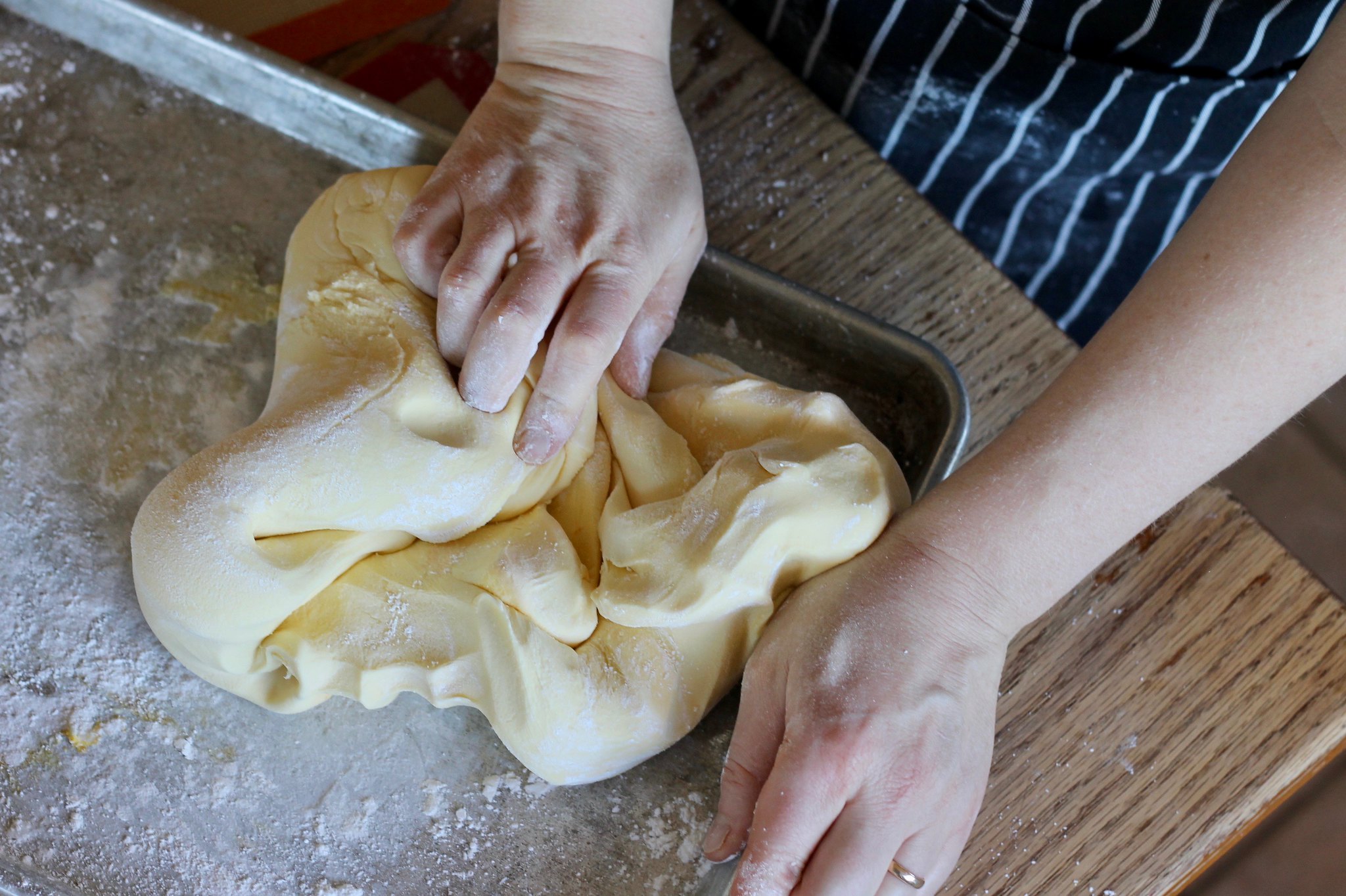 Right after lunch, I took him to my mother’s house so my younger daughter and I could decorate in peace. The two of us worked the entire afternoon.

To start, there was the carving. 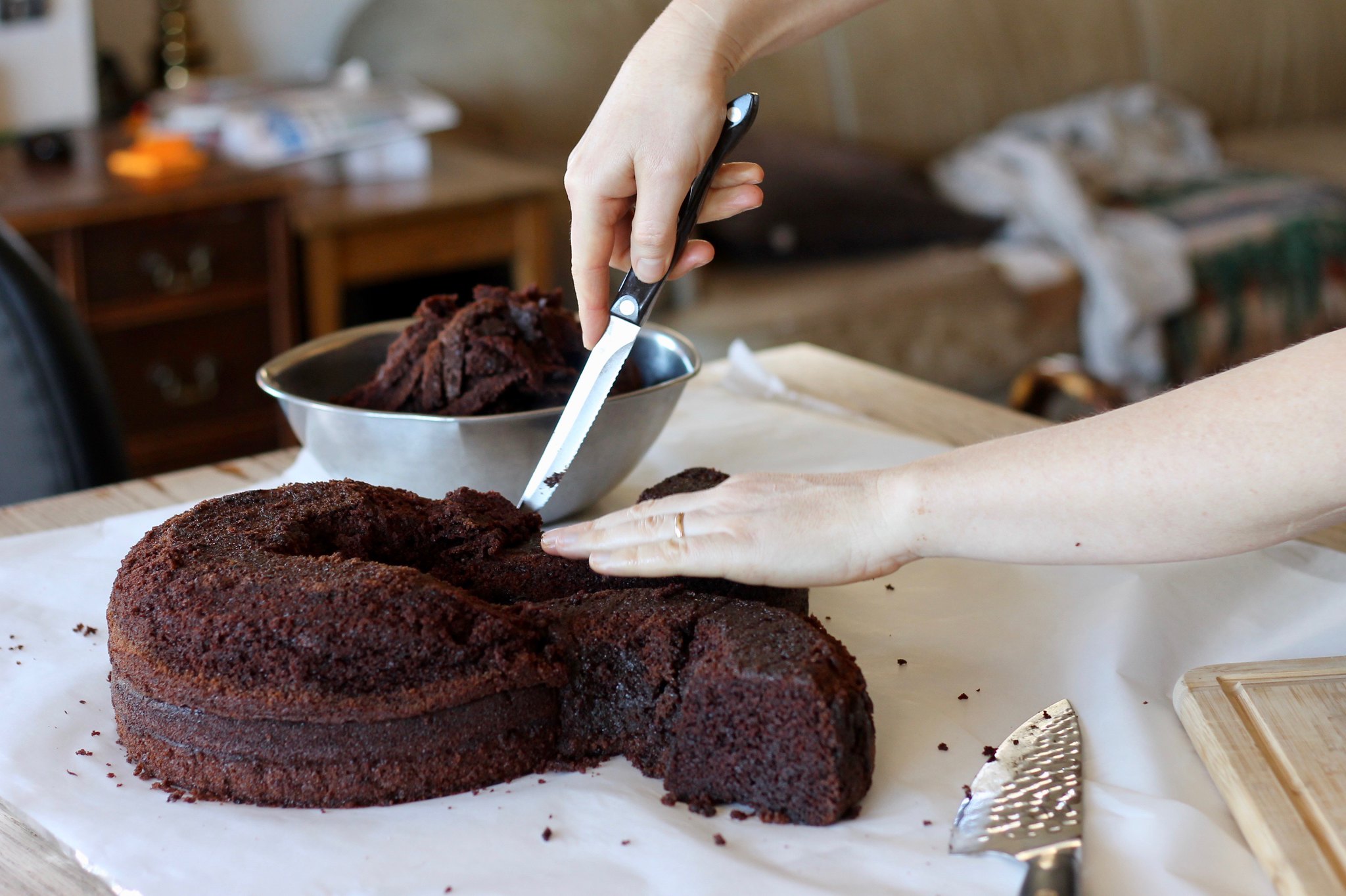 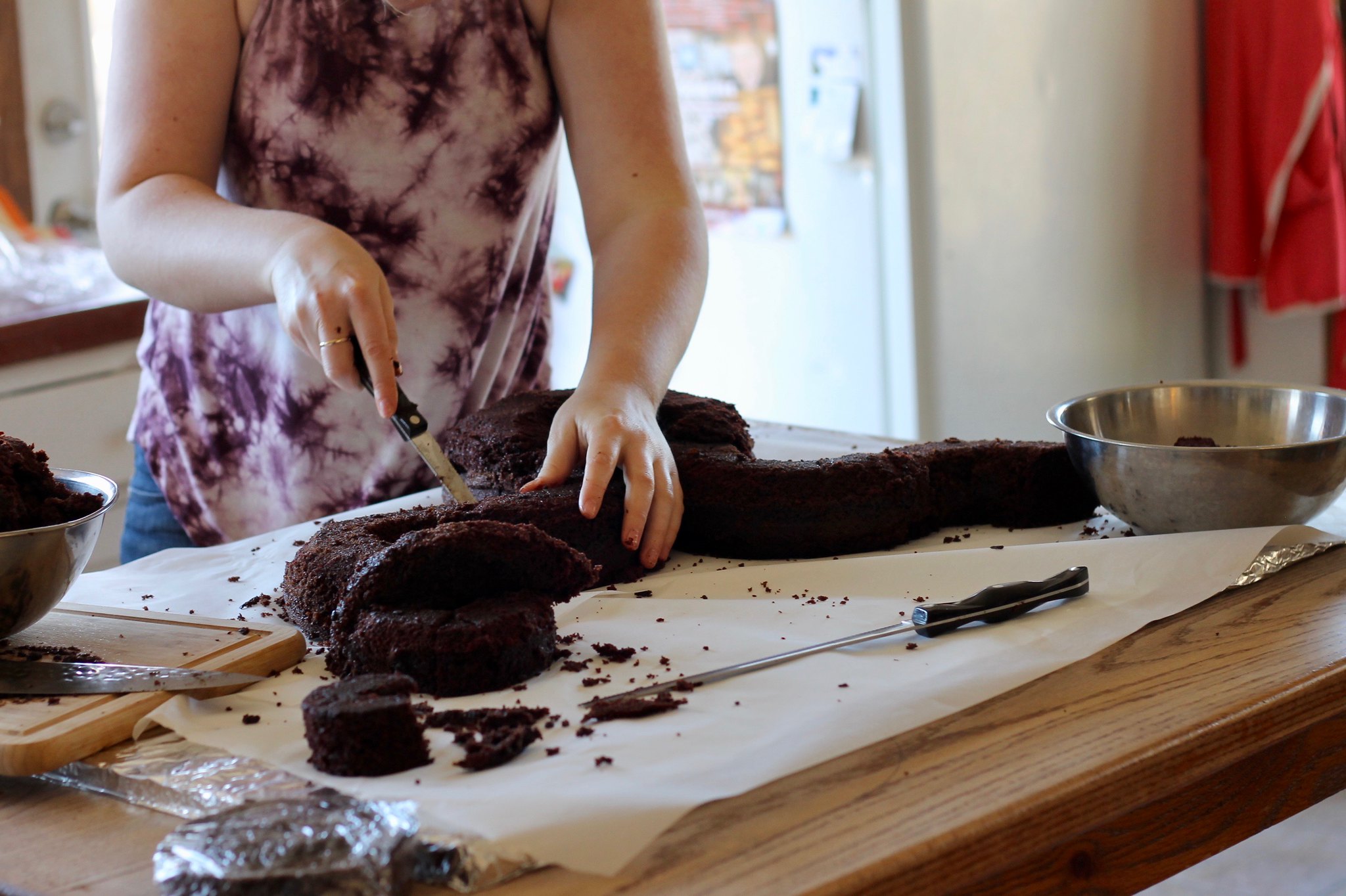 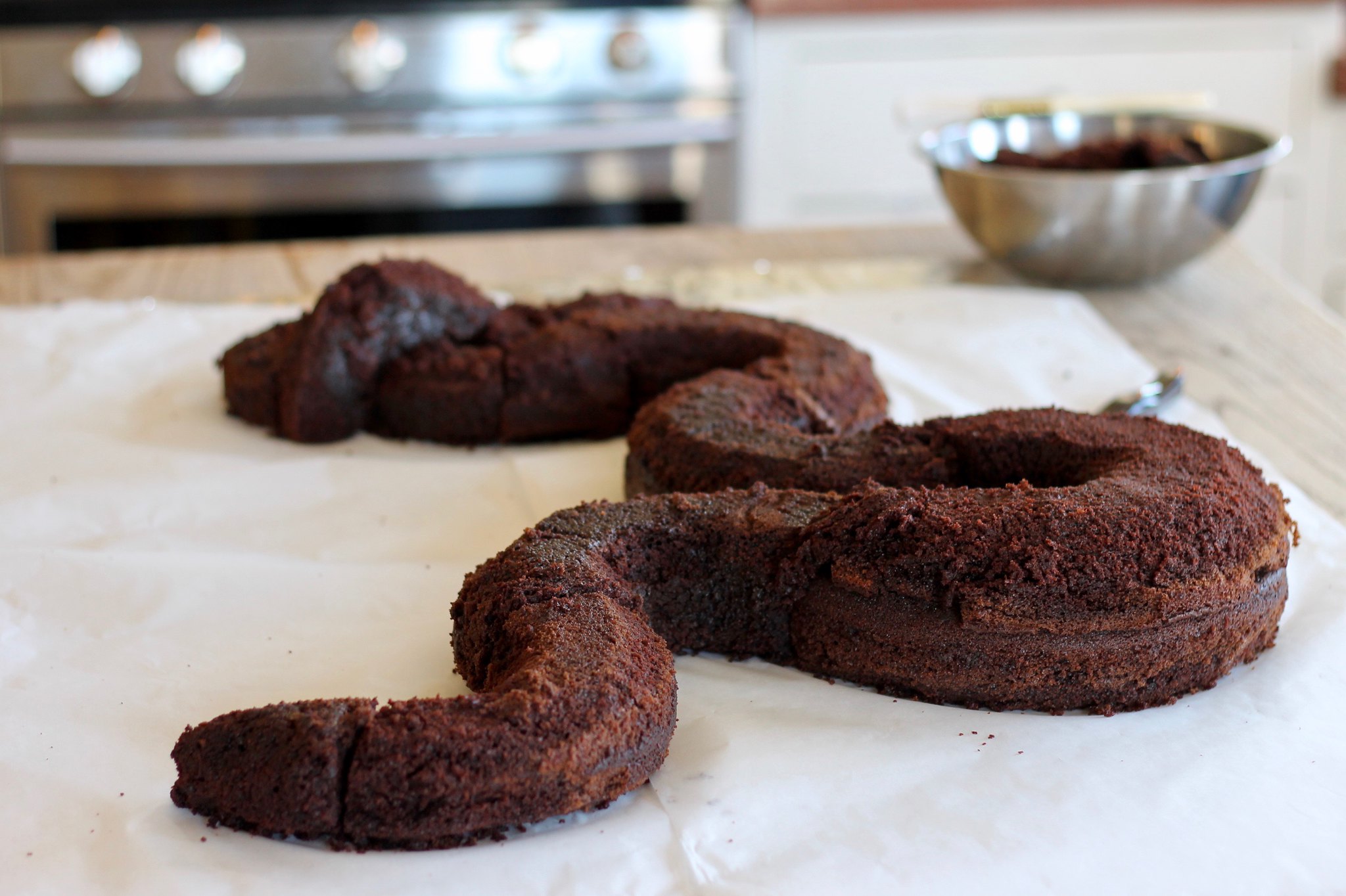 To do it well, or at least thoroughly, one must dispose entirely of any notion of thriftiness. Cake is a medium: Cut and chuck with abandon! (We did, however, freeze the scraps. What to do with three containers of chocolate cake bits?) 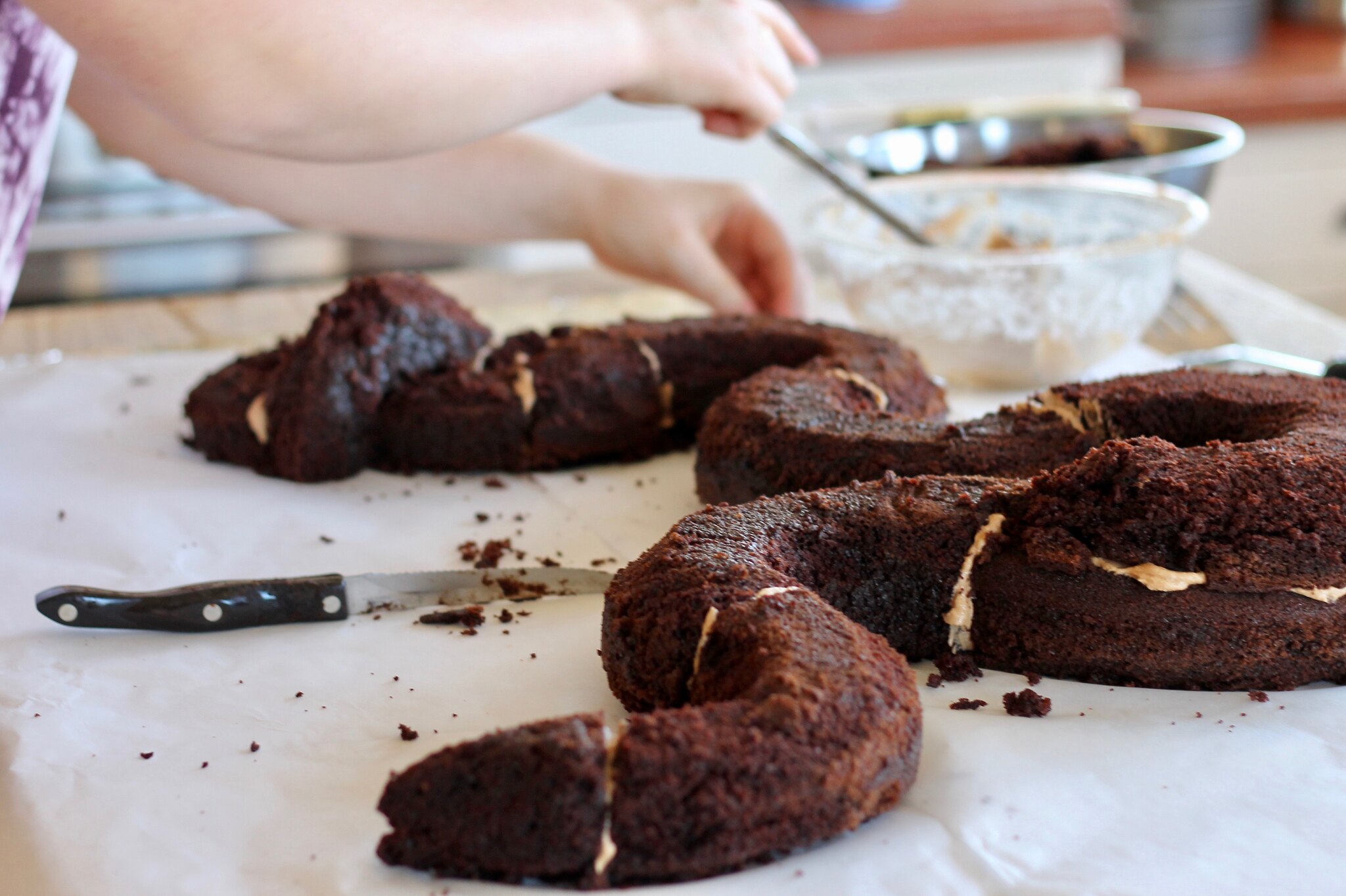 Then we connected the pieces with buttercream and spritzed them with simple syrup to lock in moisture — something that I learned from Yolanda. 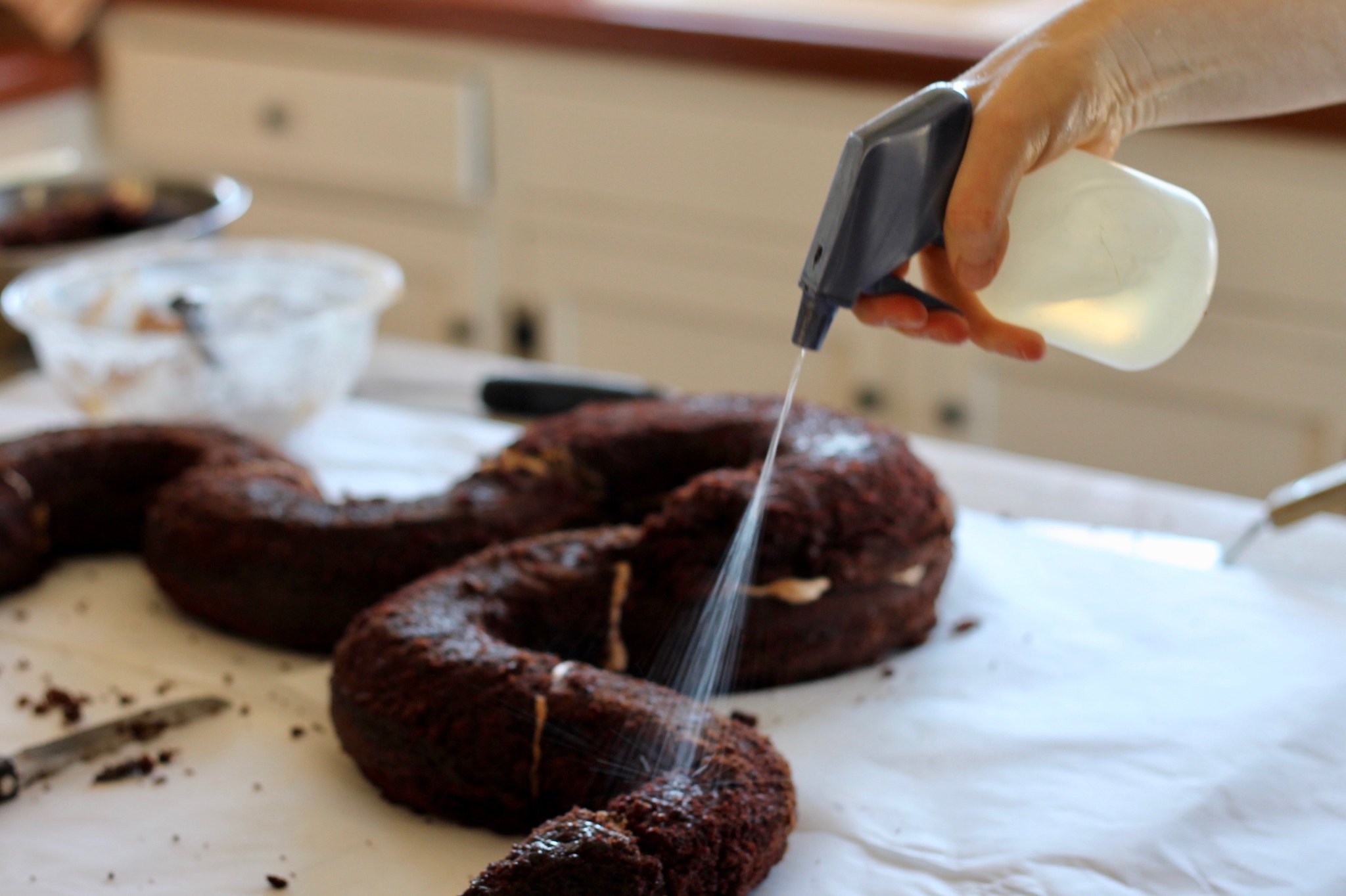 I dirty iced the whole affair. 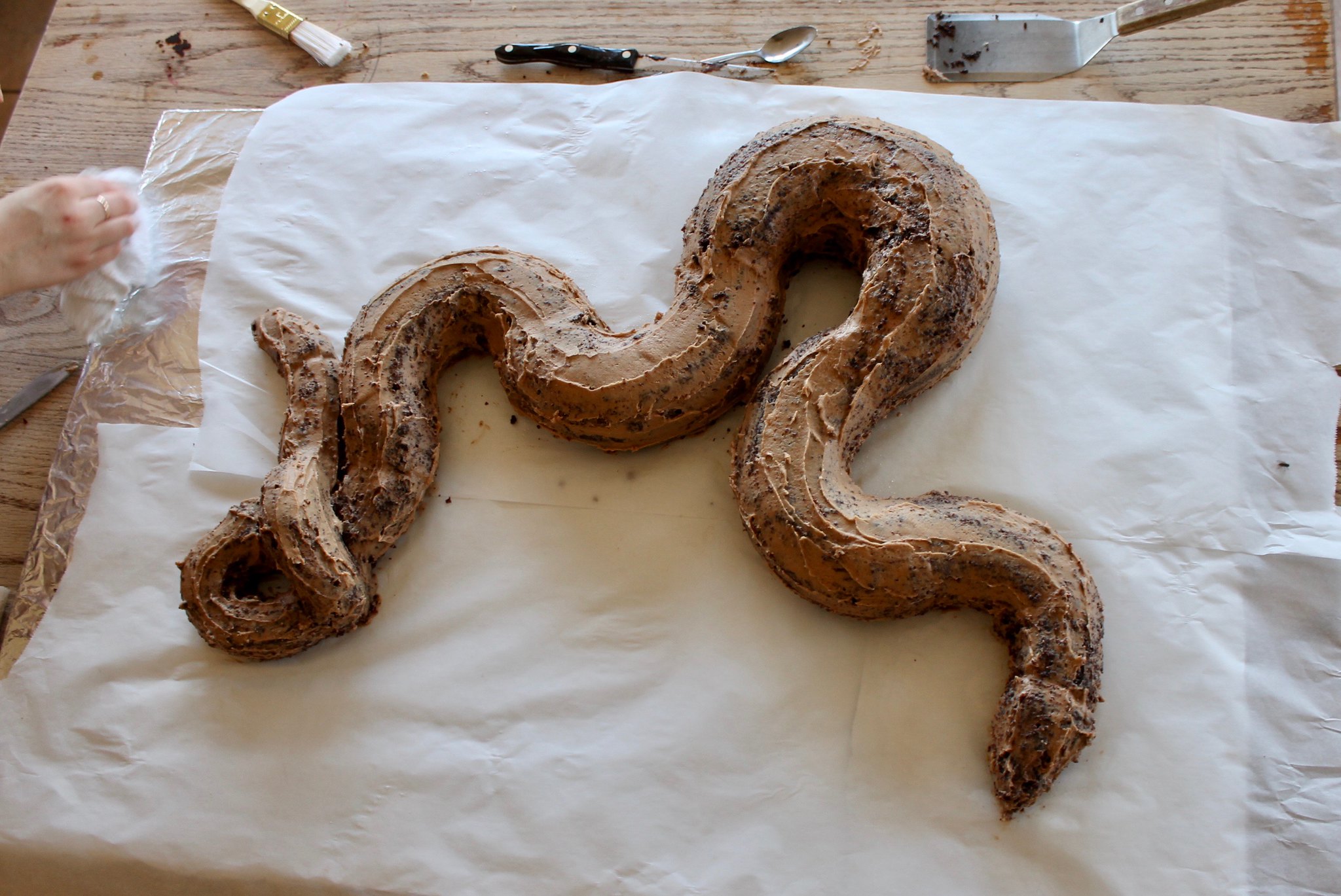 The board cleaned, it was time for the fondant. Because it was a tricky process — but not hard! — there are no photos of the rolling, lifting, pressing, and patching. 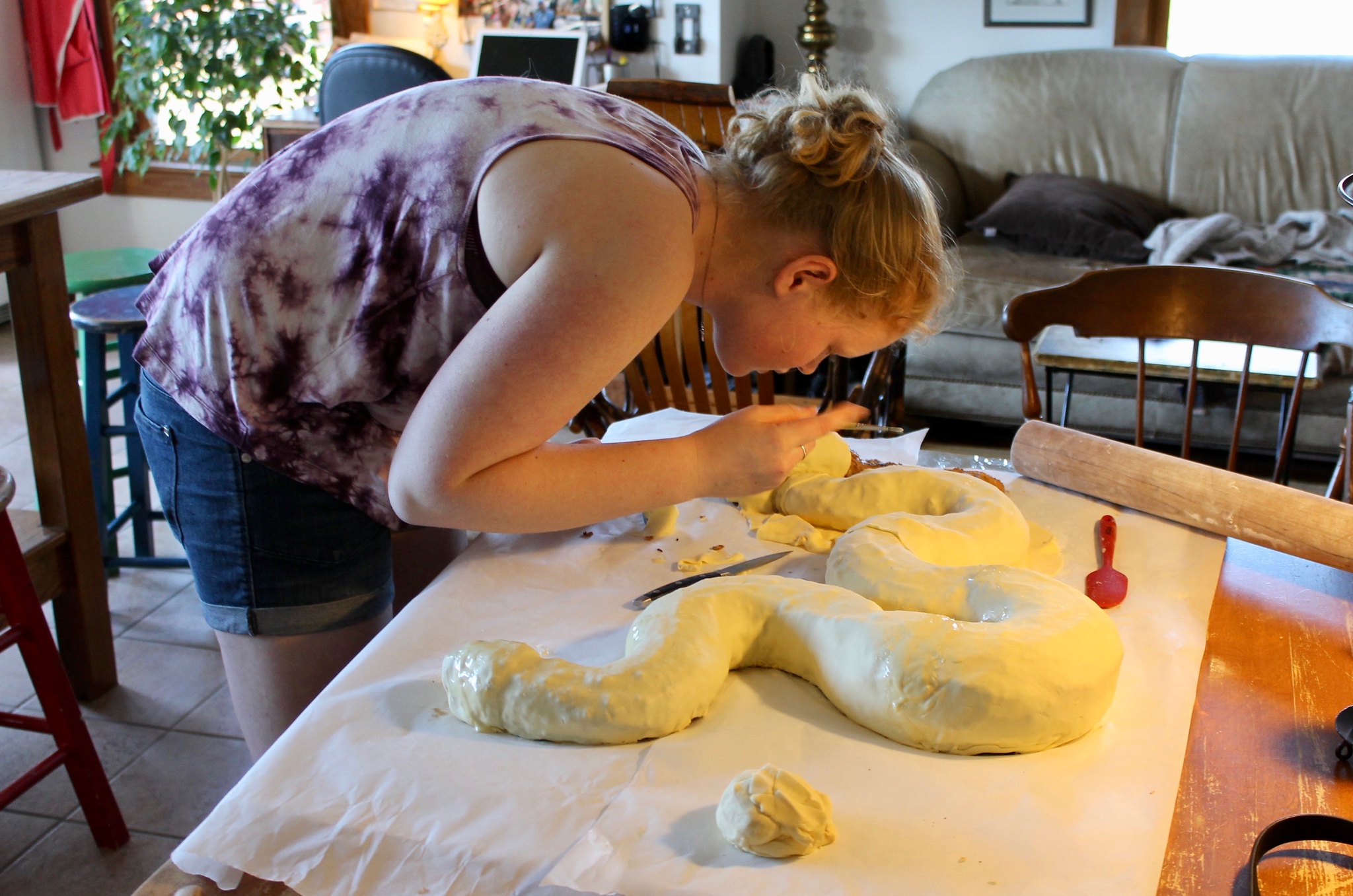 To create a pattern, I cut a piece of netting an onion bag and pressed that into the fondant. It didn’t leave a very clear imprint, but it was good enough, we decided. 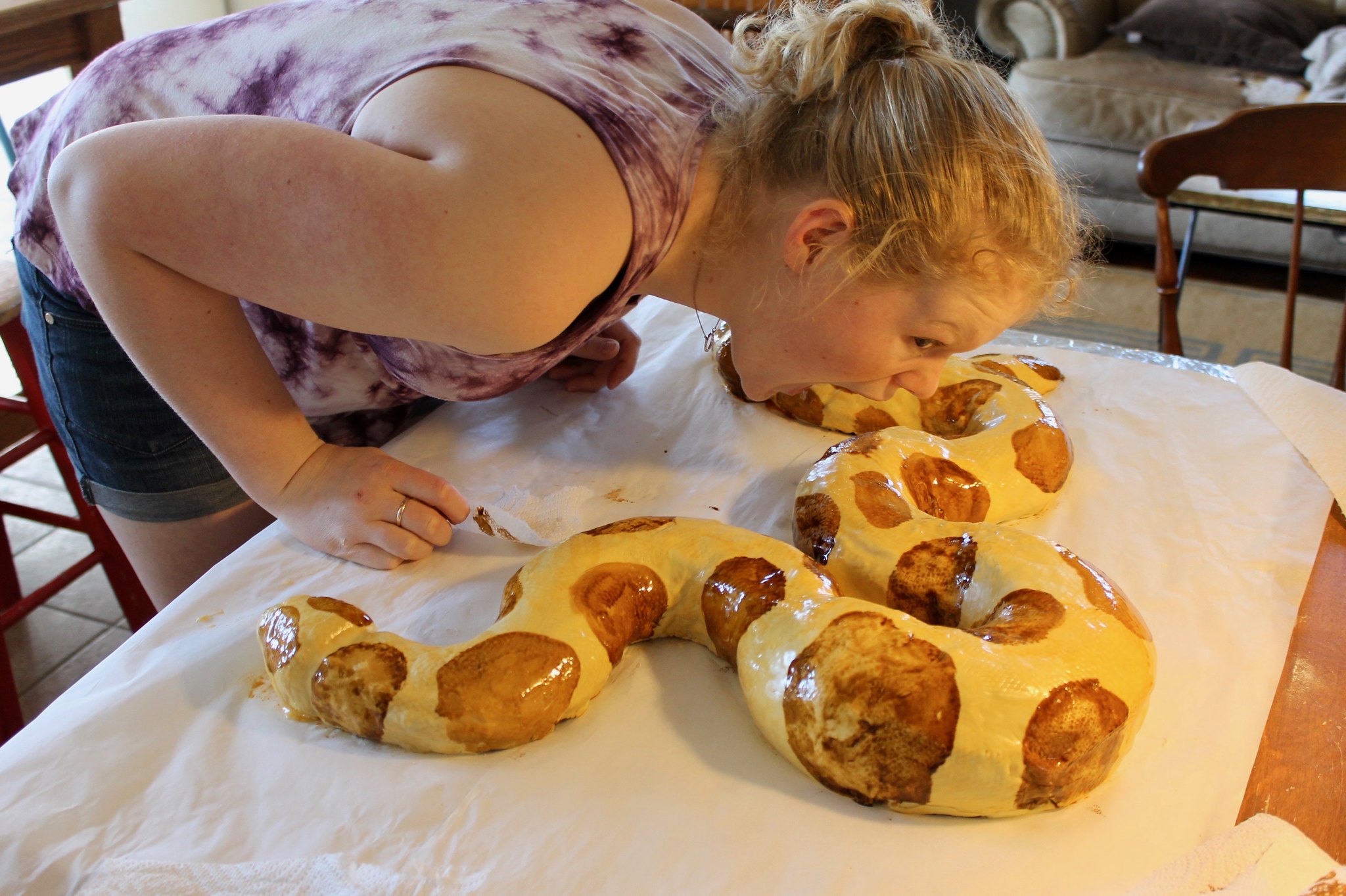 We brushed the whole snake with ivory gel mixed with rum. Then we made the shapes using mixtures of browns and blacks, blotting with paper towels as we went. 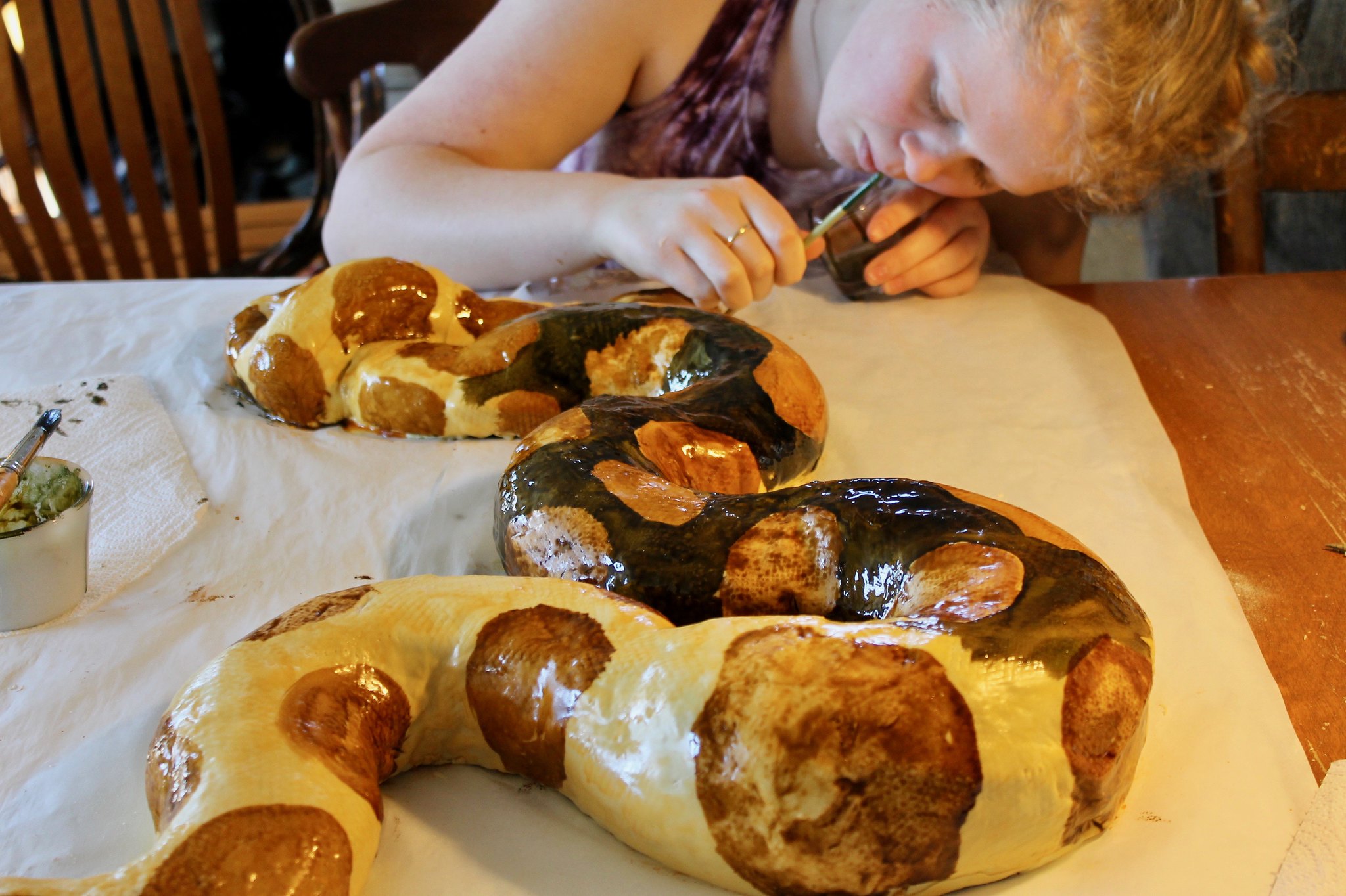 It was touch-and-go, and the end result was highly imperfect, but we were having far too much fun to really care. 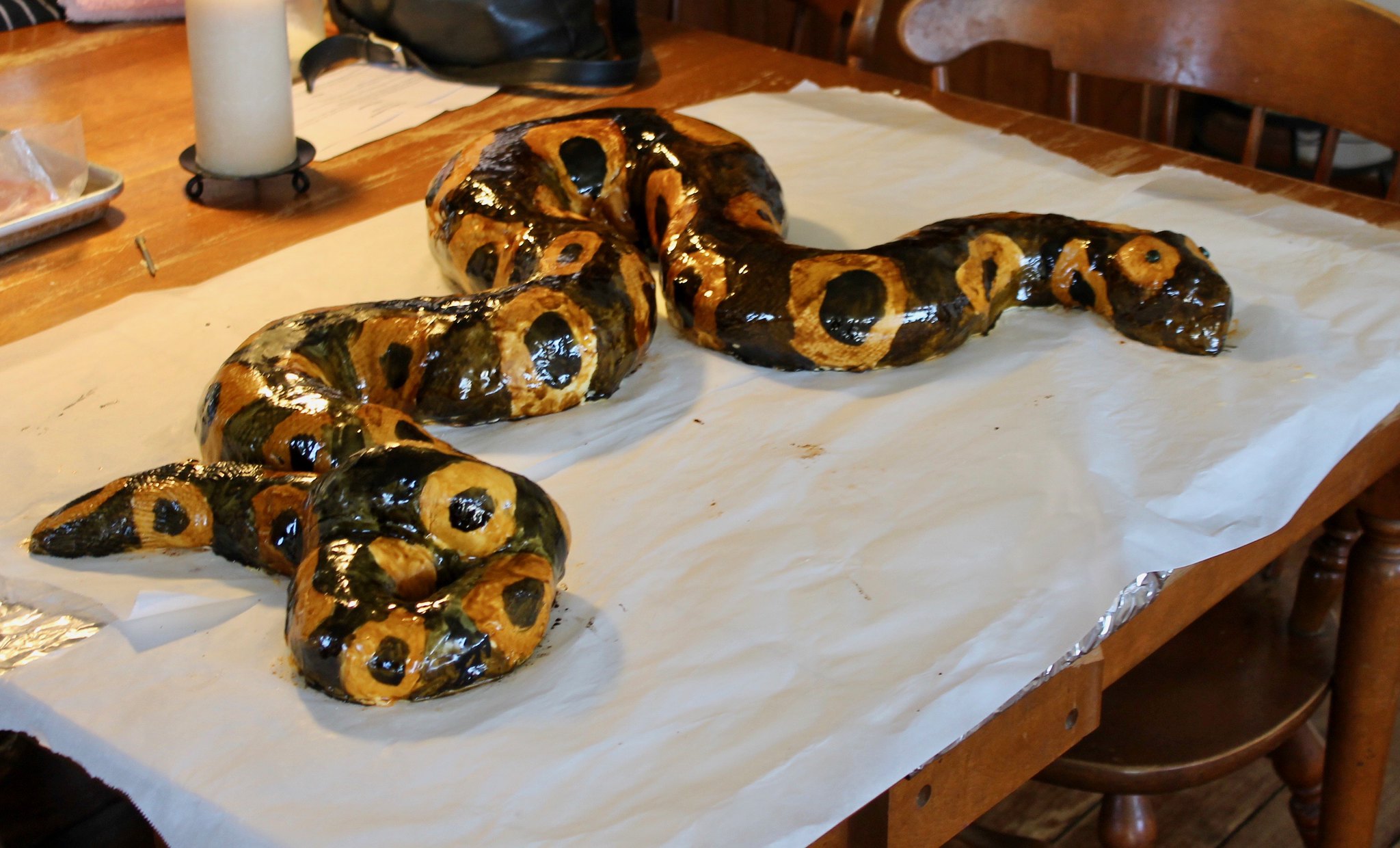 We decorated the board with rocks (that my father brought over when he and my mother came for supper) and twigs from the yard, and then hid the snake in the downstairs bedroom until the big reveal. 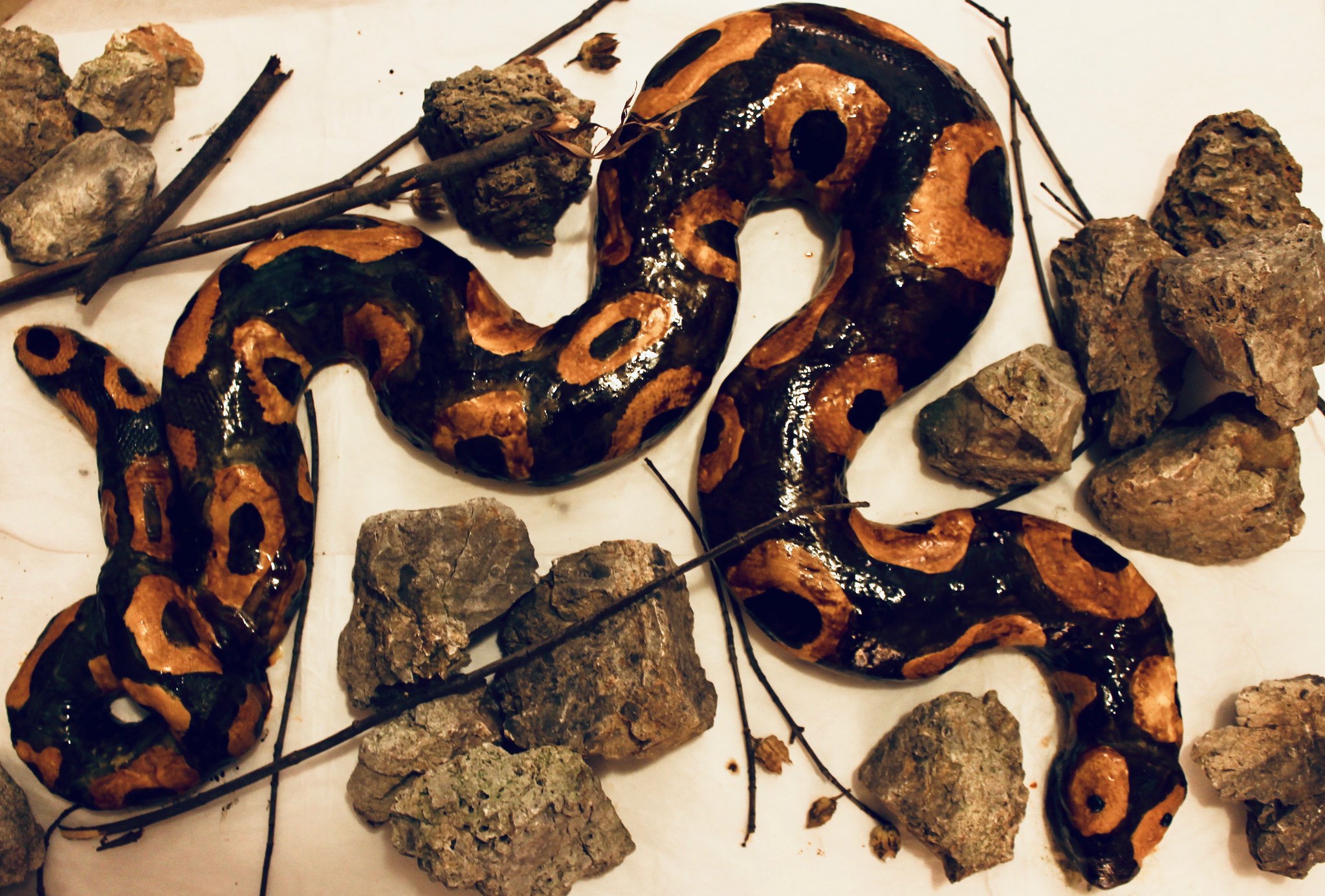 The whole project was so much fun, and now I can’t stop thinking about cake. 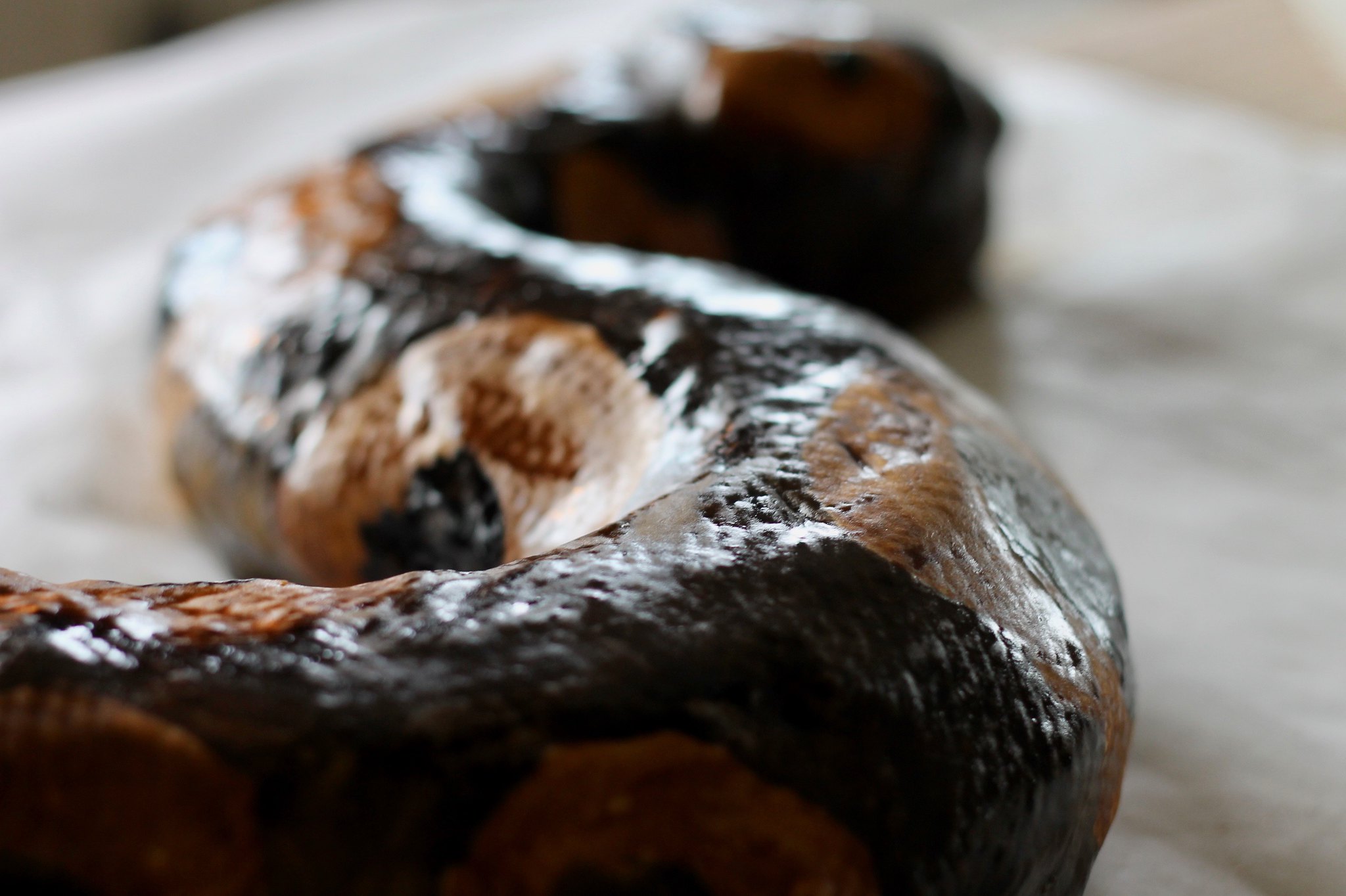 What to make next?