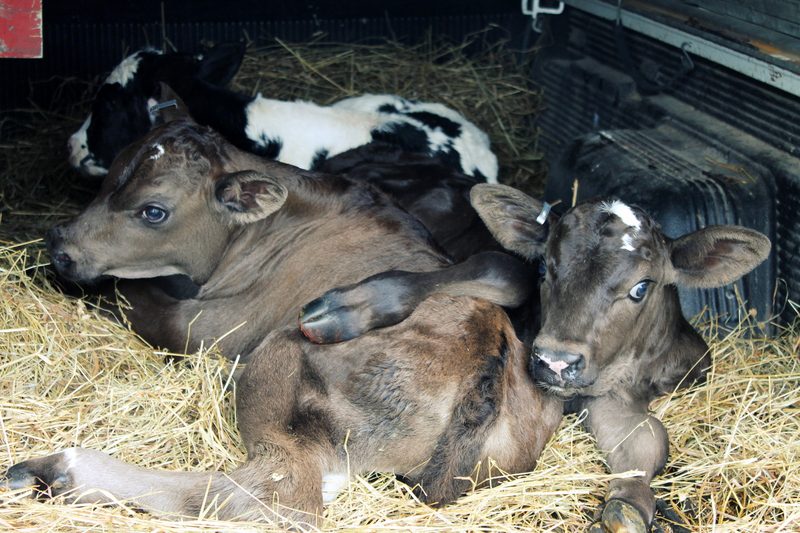 We’ve been wanting to get a couple steers to raise for meat again, so last week when a friend told us about a local dairy farm that was selling off a bunch of calves, I jumped.

Originally we thought we’d get two calves, but then my husband pointed out that if we were already bottle feeding two, what was two more? We could sell the extra steers after a few months. But then we learned that the farm occasionally sells heifer calves and a few of us thought it might be fun, a couple years from now, to experience death by milk, glug-glug. However, when we got to the farm, they didn’t have any available heifer calves, so, thinking we’d get a heifer calf later, we got only three males.

Though now that we’re home and up to our eyeballs in calf poop and milk bottles, I’m thinking three calves might be plenty enough right now? 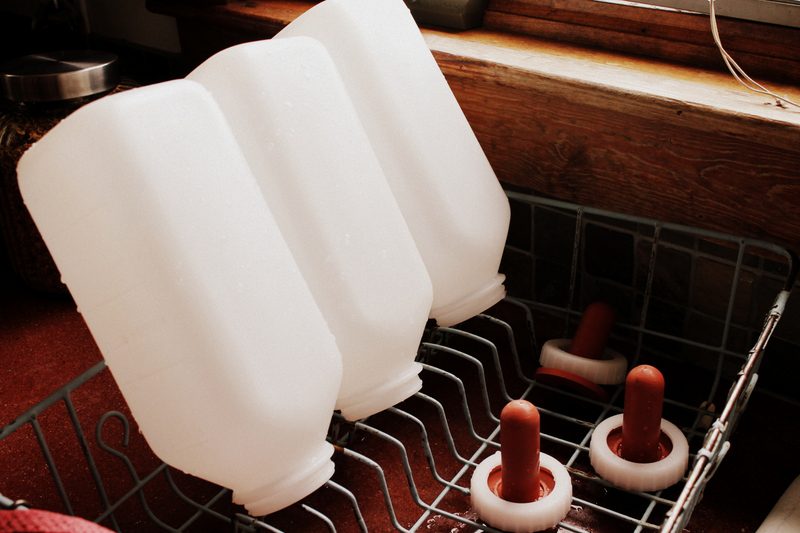 On the other hand, maybe we should go back for a heifer calf? We’re kind of leap first, look later people, so this is probably the only way we’d ever actually take on a milk cow. Besides, it’s not like we’d have to breed and milk her. We’d have two years to think it over, and we could always change our minds, right? Right?

Sidenote: At the farm, the owner took a good look at my daughter and said, “You look familiar. Do I know you?” We puzzled over possible connections for a few seconds, and then it dawned on me: the relief sale! Our daughter is the poster child for the Virginia Mennonite Relief Sale, and her face is plastered everywhere. 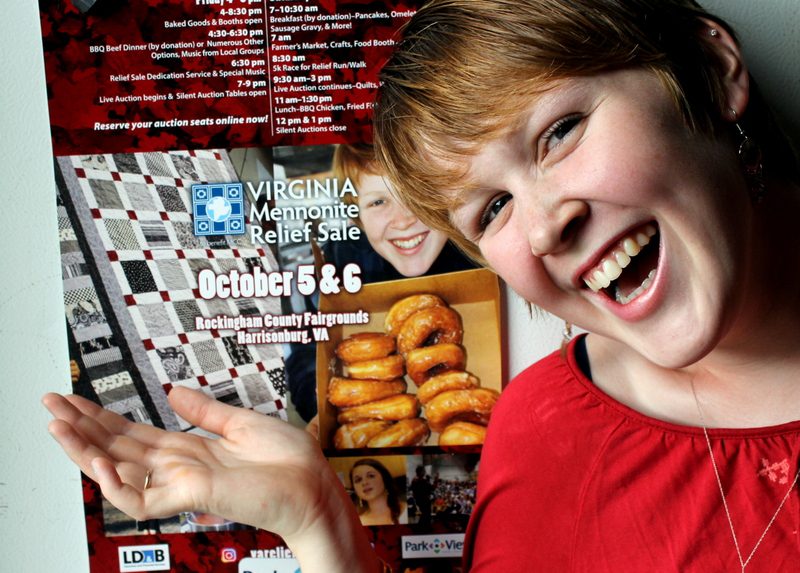 The calves are crosses between Brown Swiss and Holstein. With their long, spindly legs and high rumps, they’re a lot bigger than I thought they’d be, and they’re encouragingly active. Heavy, too. 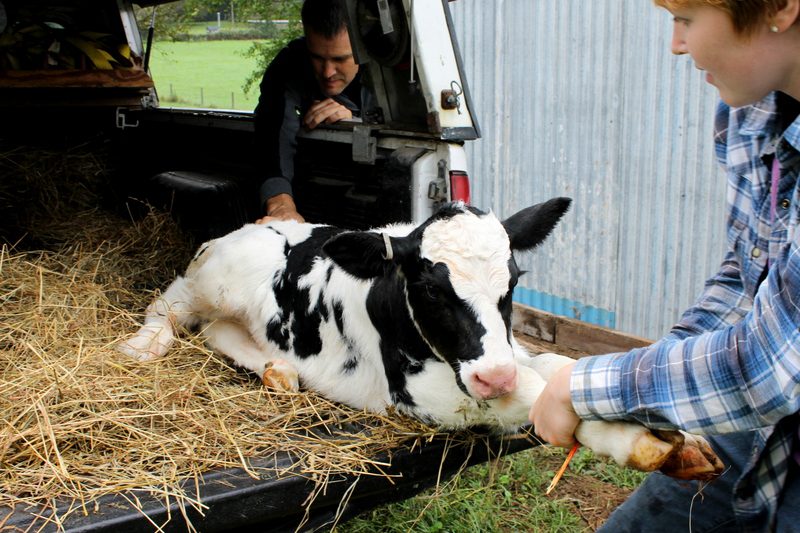 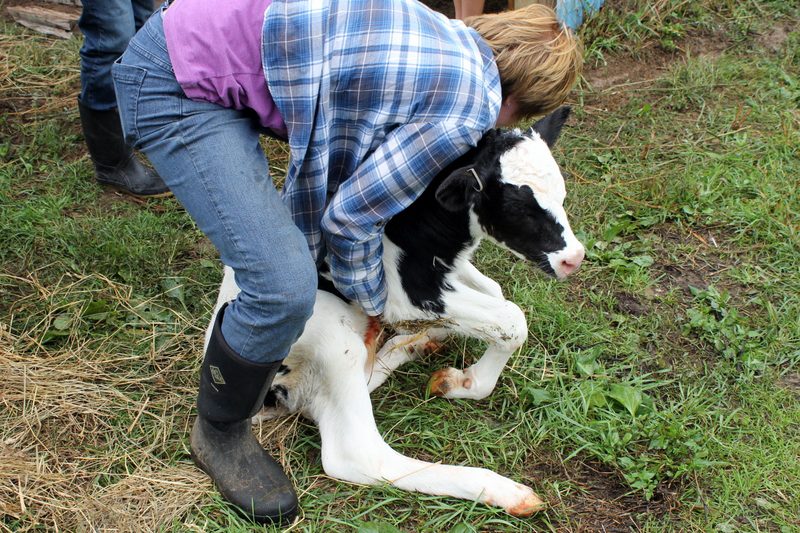 Even though we checked to make sure each of the calves had a good suck at the farm, once we got them home, we had trouble getting them to take the bottle. Only one kept at it, sucking and sucking and sucking, but without taking in hardly any milk. Then my daughter enlarged the nipple holes with a knife and — schlurp — down went the milk. Suddenly they were buzzing all over the shed, chewing on our pant legs and butting us in the butts. It was like they’d just had a shot of caffeine. 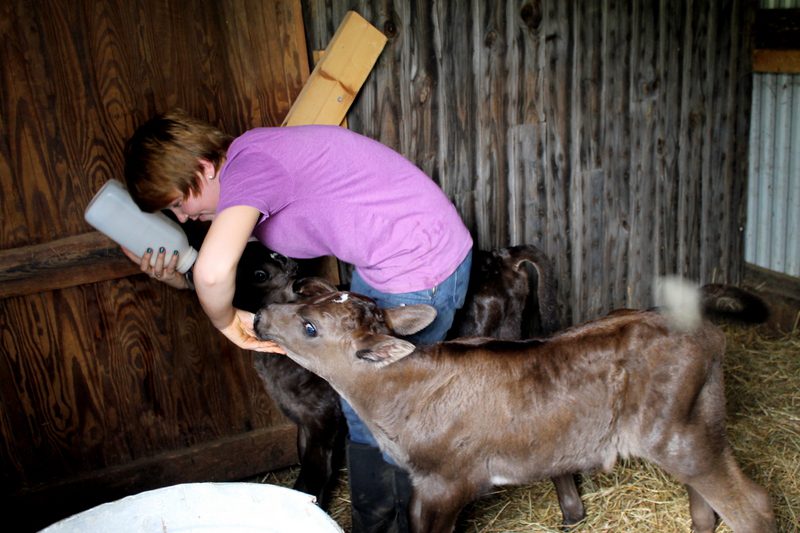 I bought enough frozen colostrum for two feedings per calf, but then later I read that calves are only capable of absorbing the antibodies up to 36 hours after birth, so, since two of the three calves were two days old — and since at the farm, they’d already given them each three quarts of the colostrum — buying the stuff was probably a waste of money.

But on the bright side: when pouring the colostrum into the kettle to heat it up, I spilled an alarming amount, sending a bunch of the thick, creamy liquid cascading down between the counter and the stove, so we had to pull the stove out from the wall and scrub everything down so now my kitchen is just that much cleaner, yay. 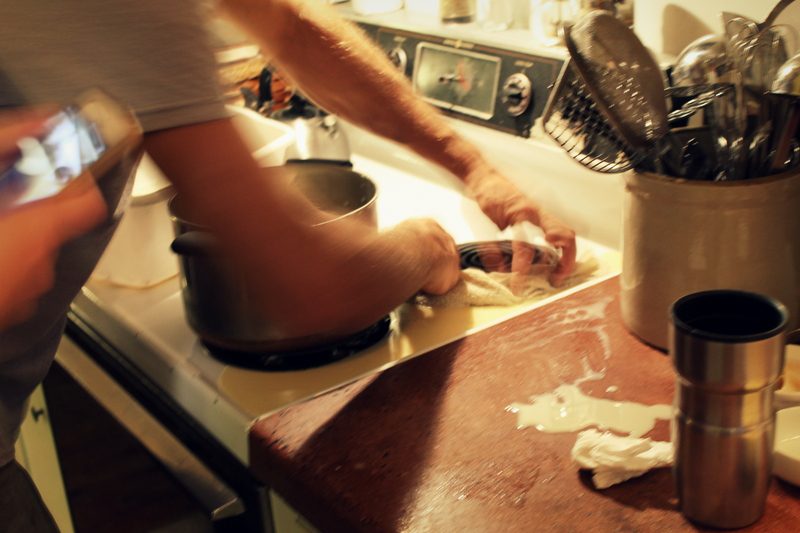 We’re all a little paranoid about the calves getting scours (i.e. deadly diarrhea), so we’re obsessively watching their poos. We’ve read up on home remedies (doses of pectin mixed with water, adding a raw egg to their milk, etc), and my daughter gave them vitamin injections and is keeping their shed clean and dry, but really, we have no idea what we’re doing. We’re just winging it. 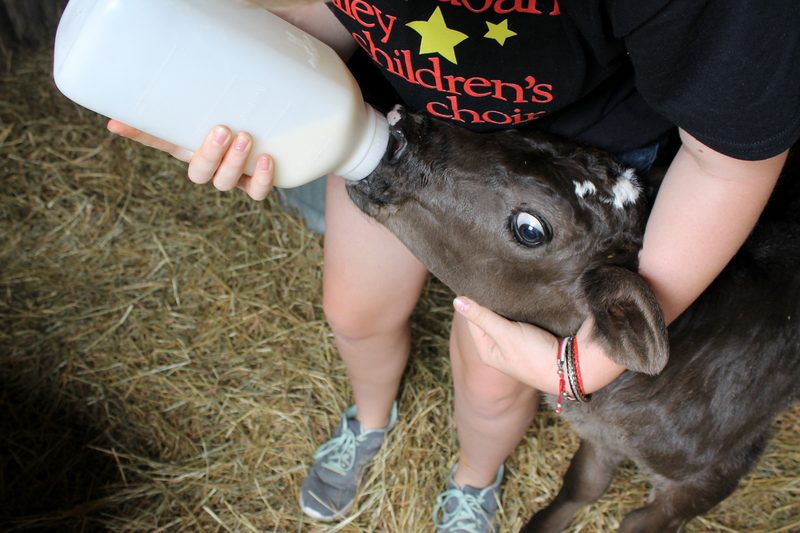