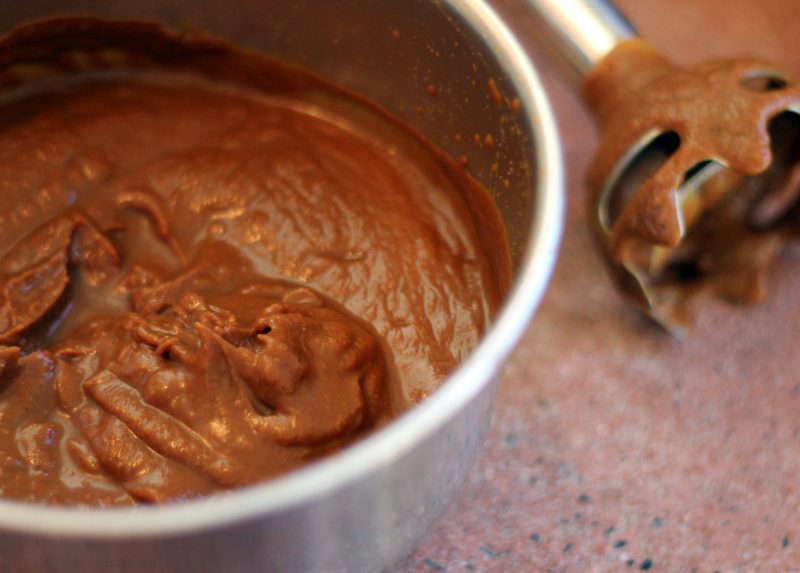 At the library last week, I snatched the entire stack of Cook’s Illustrated magazines and ever since I’ve been happily sifting through the recipes, making grocery lists, tracking down unique ingredients, and experimenting. For supper a couple nights back, I made chicken and sausage gumbo. It was delicious — spicy, rich, meaty, and flavorful — but the thing that I was most excited about was the sauce. Or rather, how I had thickened the sauce.

The recipe called for toasting the flour — a whole cup of it — in the oven until it was the color of cinnamon and then adding it to the broth to flavor, thicken, and darken the sauce. I’d never heard the likes, so of course I had to try it.

Not knowing what to expect, the process felt touch-and-go. While the flour toasted, I hovered, afraid it would scorch, but I needn’t have worried — the flour browned slowly and steadily. Then, adding the broth to the flour, the paste turned lumpy even though I had been steadily whisking the whole time. I ran my immersion blender through the paste — problem solved. And then, immediately after adding the flour to the liquid, the sauce tasted grainy, like a Nicaraguan corn drink, and I nearly threw in the towel. There was no way I’d get this by my family’s noses.

But then, after simmering the sauce for another 20-30 minutes, the weird texture completely disappeared, leaving the sauce smooth as silk. Dark, nutty brown, and lusciously rich, it reminded me of an adobo sauce (never mind that I’ve never made an adobo sauce) — it had depth. 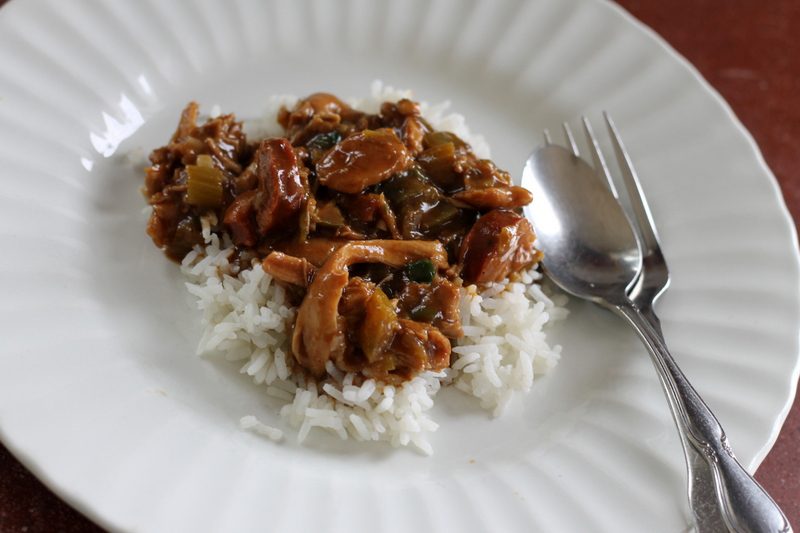 I’m still scratching my head about the flour, though. Any other time, adding a cup of flour to four cups of liquid would yield a horribly gelatinous paste, so why not in this case? Does flour lose its thickening properties after it’s been toasted? 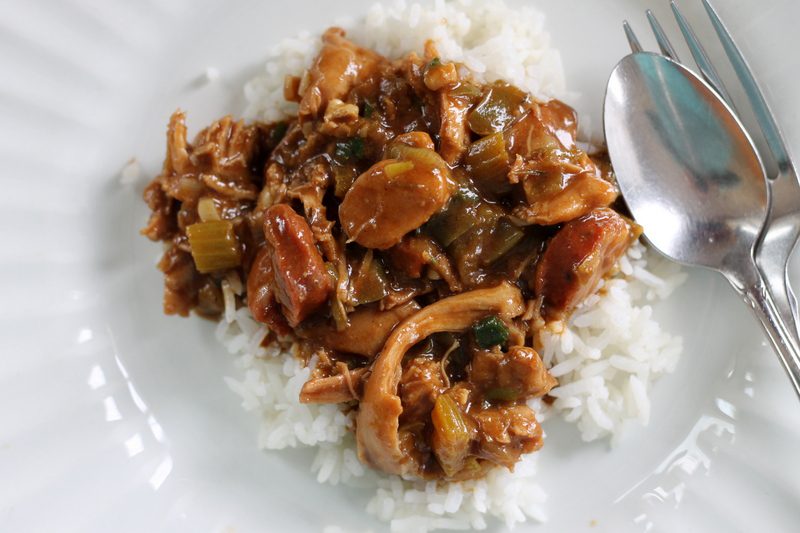 Chicken and Sausage Gumbo
Adapted from the January and February 2017 issue of Cook’s Illustrated magazine.

The recipe called for two pounds of chicken, but since there was plenty of sauce, next time I’ll use three pounds.

As for the sausage, andouille is expensive and sort of hard to find, and after eating it, I think any spicy sausage would work well here. Next time I’ll probably use kielbasa instead.

to toast the flour:
Put the flour in a sided baking sheet and bake at 400 degrees for 20-30 minutes, stirring every five minutes. When the flour is the color of ground cinnamon, remove it from the oven and transfer to a bowl to cool. The flour can be made ahead and stored in the freezer.

to make the gumbo:
Saute the pepper, onion, and celery in the oil until softened. Add the garlic, thyme, paprika, bay leave, cayenne, and a bit of salt and pepper and saute for another minute. Add 2 cups of chicken broth. Nestle the chicken into the broth in a single layer (don’t worry if it’s not completely submerged) and cook on medium-low heat for about 20 minutes, until it’s cooked through. Remove the chicken to a plate to cool and then shred with a fork.

Slowly whisk the remaining 2 cups of broth into the browned flour. If the paste is lumpy, use an immersion blender to smooth it out. Increase the heat under the vegetables and slowly whisk in the flour-broth paste. Add the sausage. Simmer uncovered for 25 minutes, stirring occasionally.

Add the chicken and scallions to the gumbo and heat through. Remove the bay leaves and season with salt and black pepper. Remove from heat and stir in the vinegar.

Serve the gumbo over rice.

This same time, years previous: the quotidian (2.1.16), stuck buttons and frozen pipes, how we got our house, taco seasoning mix, advice, please.