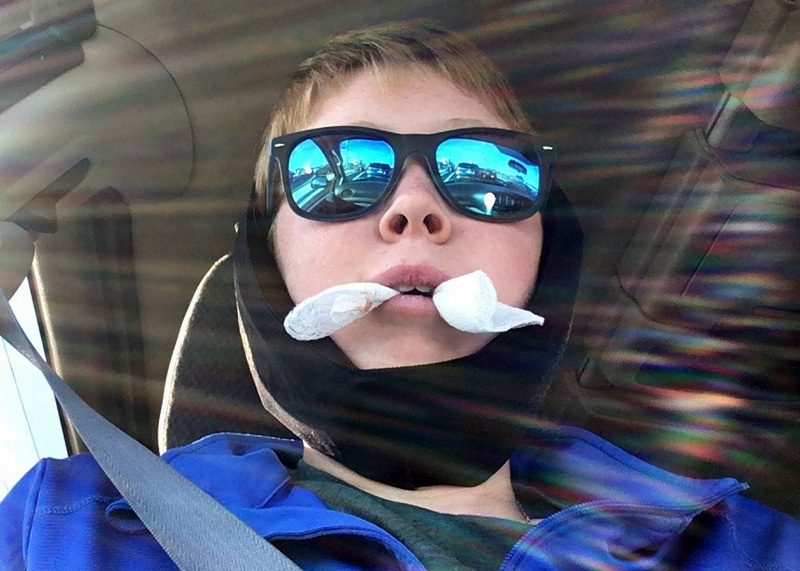 I’m a little discombobulated. My morning was busy, but in an “occupied but not really doing things” way: I took my daughter to get her wisdom teeth pulled (while I was in the waiting room, I read a substantial chunk of my book — it’s good!)…

…and then went to the bank and pharmacy before returning home to oversee chores and studies, help The Woozie One change her bloody gauze pads and take her meds — and then laughing uproariously at her when she drooled all over herself — and feed the kids leftovers (braised beef ribs over rice, sweet potato casserole, oatmeal, banana, apples and cheese, plus applesauce for the sicky). 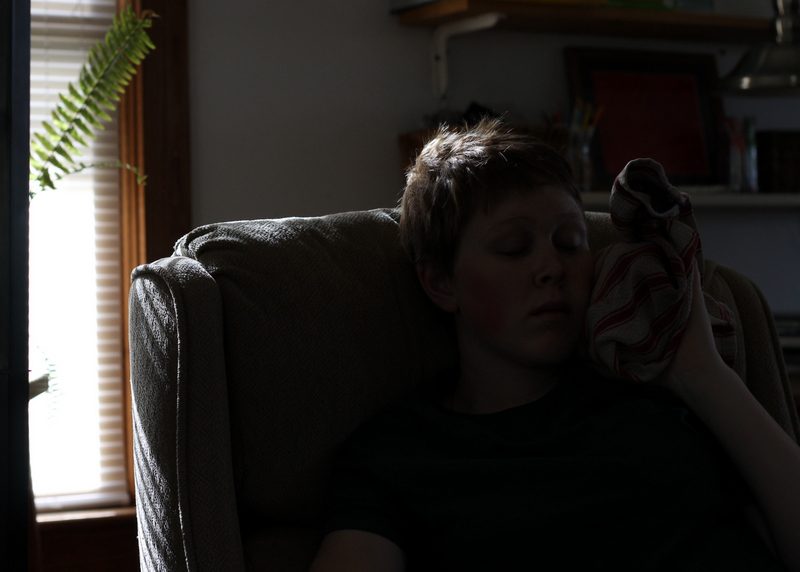 I’m attempting to get back into writing the book, but it’s a hard shift to make. Carving out the space to think, uninterrupted, is really not that difficult, but somehow it feels almost insurmountable. So far, I’ve been scribbling “write 2 hours” on my day’s to-do list, but that’s not cutting it. Probably, I need to actually schedule blocks of writing time on the calendar, sigh.

Several of my friends (maybe you, too?) are participating in Nanowrimo (National Novel Writing Month), and even though they urged me to join them, I declined. I’ve been writing reams on my topic for years, and at breakneck speeds, too, but I’m at the point now where I need to inch along. So while they’re cranking out their fifty thousand this month, I’ll be doing fantastic if I hit four. Again, sigh. (But knowing so many other people are slogging away does give me energy, and that’s not nothing.)

I’ve been messing around in the kitchen a little more than normal. When it comes to cooking, one of my favorite parts is The Quest: tackling a new recipe, researching different methods, and then experimenting. In the book I’m reading, the author quotes Alice Waters who says of Edna Lewis: “She enjoyed a childhood that could only be described as idyllic, in which the never-ending hard work of farming and cooking both sustained and entertained an entire community.” I read that line and then I read it a couple more times because, hello YES. Even though my life is neither idyllic nor filled with never-ending farm work, the last part is absolutely true: cooking both sustains and entertains me. 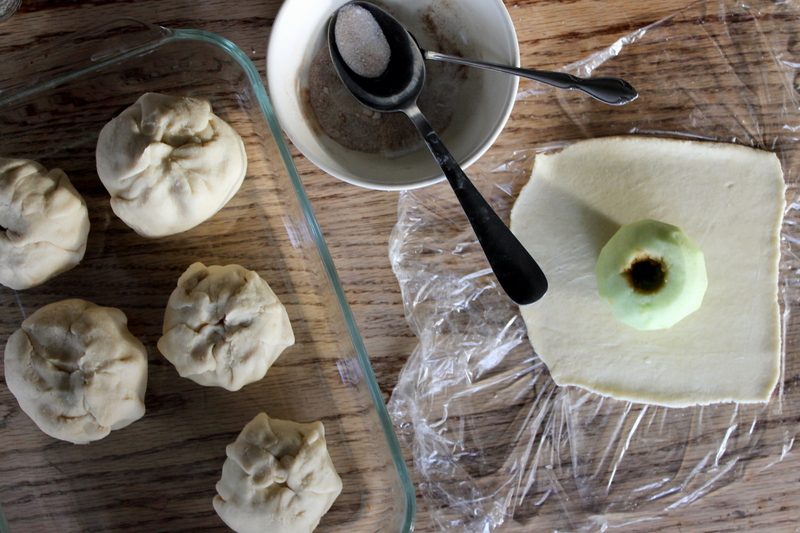 Earlier this week, I drove over to the orchard to get a bushel of apples — half Fuji for fresh eating, and then a mix of Granny Smith and Jonathan for baking (as well as a couple more gallons of cider and a bunch of butternut squashes because why not) — so now, along with beef, I have apples on the brain. 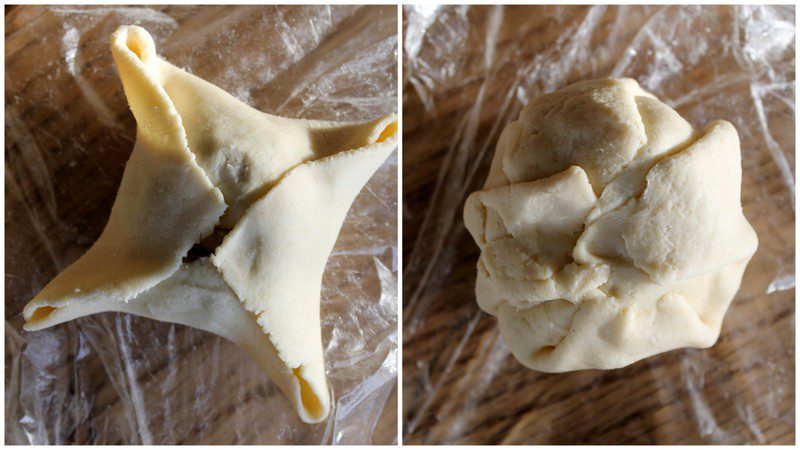 Yesterday, I plucked several of my most promising dumpling-esque cookbooks from the shelf and then sat down at the kitchen table to do research, finally settling on a recipe from the Mennonite Community Cookbook (and after toying with the ideal of systematically making every single apple recipe from that cookbook a la Julie and Julia). I was pretty sure I’d made dumplings before, but when I told the kids I was making then for supper, they were all like, Huh? What are apple dumplings? I guess if I made them before, then it was a long time before. Which is kind of sad because it feels like apple dumplings and a proper childhood ought to go hand-in-hand, don’t you think? 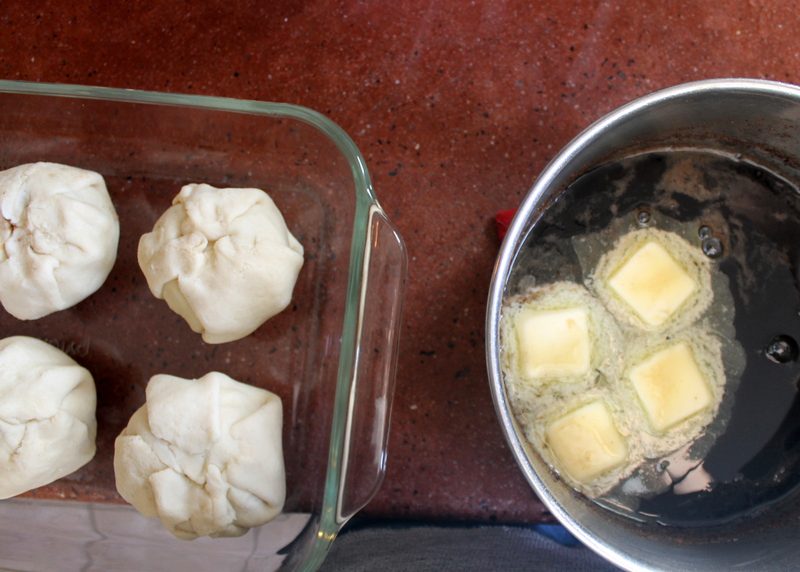 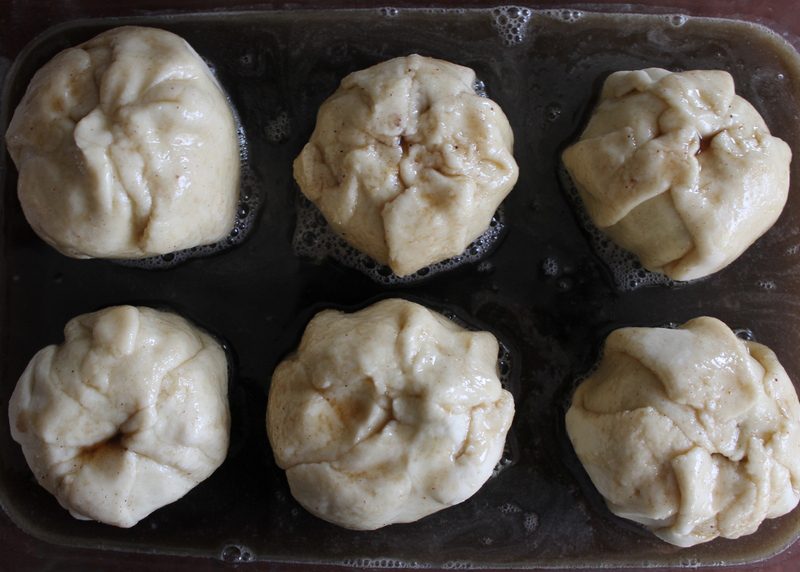 The dumplings were quite easy to slap together: peeled and cored apples (left whole), each one set atop a square of pastry, and then the apple’s hollow insides filled with cinnamon sugar before bundling it up with pastry and placing the little package into the baking dish. A hot brown sugar and butter syrup, seasoned with nutmeg and cinnamon, gets poured over and around the dumplings, and then, a couple times during baking, the syrup is spooned over the dumplings so that the sugar caramelizes the pastry, turning it golden brown and crunchy. 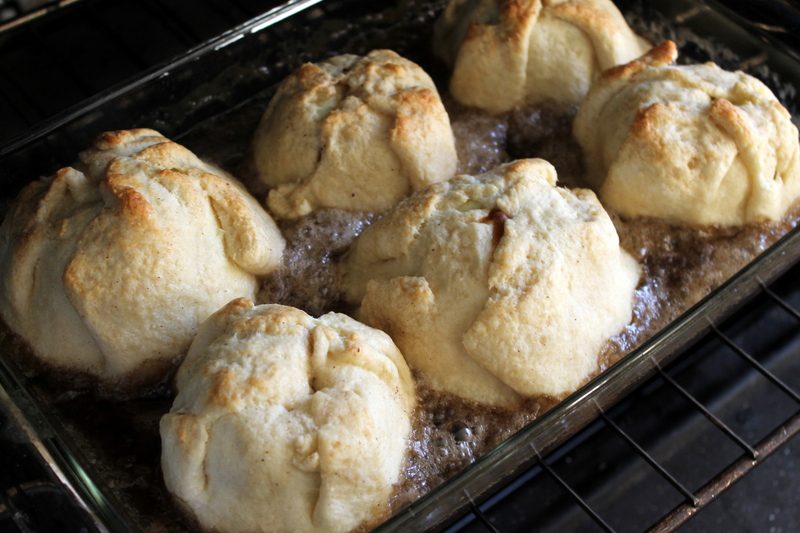 By the time the dumplings are done, the majority of the brown sugar sauce has boiled away, leaving a thick syrup in its place, and the entire kitchen smells like heaven. 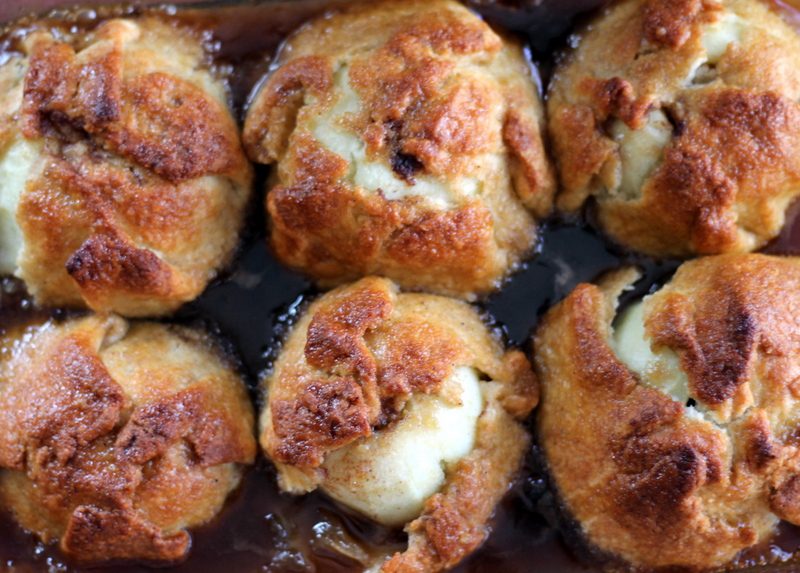 We ate our dumplings hot with cold milk poured over top. And the leftover spiced syrup I saved, to swirl into our breakfast oatmeal. 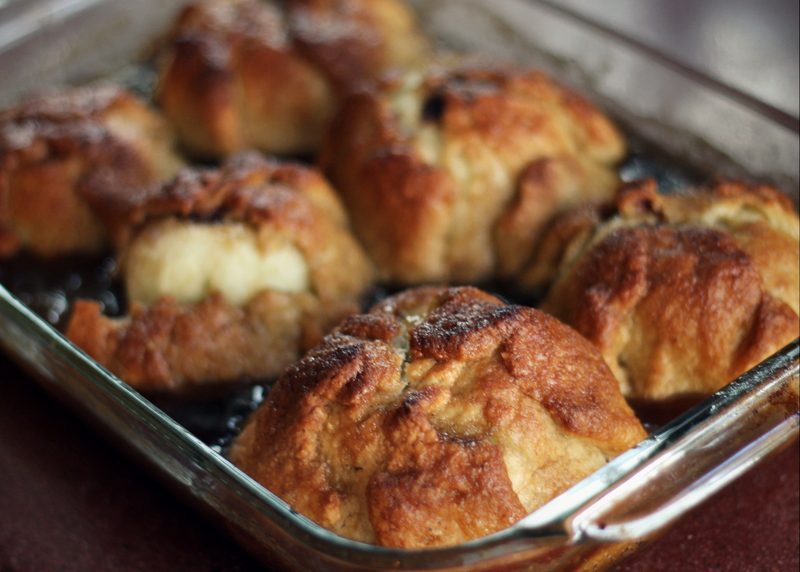 To make the pastry: Stir together the dry ingredients. Using your fingers (or a food processor), cut in the butter. Add the milk and knead lightly to form a ball. Press into a rectangle, wrap in plastic, and chill in the refrigerator. (It can be refrigerated for a couple days, or frozen, if desired.)

Roll the dough into a large rectangle and cut into six squares.

Place an apple on one square of pastry. Spoon some of the cinnamon sugar into the cavity. Fold the edges of the pastry up over the apple, pressing the edges closed with your fingers. Place the apple in a 9 x 13 glass pan. Repeat with the remaining apples and pastry.

To make the syrup: Put the sugar, water, and spices in a kettle over medium-high heat. Bring to a boil, reduce the heat, and simmer for five minutes. Remove from heat and whisk in the butter. Pour the hot syrup over and around the dumplings.

Bake the dumplings at 375 degrees for 35-40 minutes, basting every 15 minutes or so. Serve warm, drowned in cold milk.