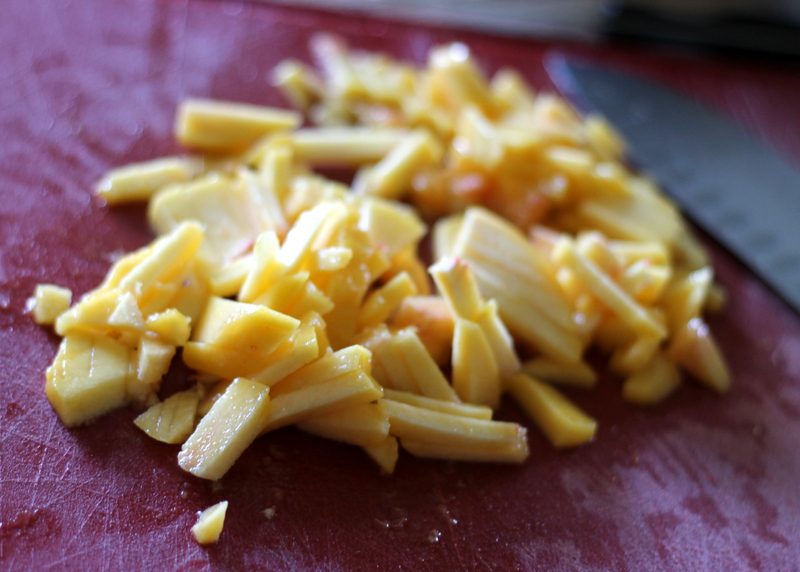 Here’s how it happened…

The more peach pies I made, the more I realized that it was the chunks of fruit I didn’t like. Because see, it is my firm belief that in a pie, the fruit should cook down, losing its shape and intensifying in flavor until it’s a burbling, joyful mass of juicy, fruity goodness. But peaches don’t do that! No matter how long I baked the pies, the peaches remained distinct, each piece slippery-solid and slightly acidic. Blech, meh, yuck, etc, etc.

So I got creative.

I roughly mashed a couple peaches, and the rest I sliced thin, almost like stocky matchsticks. I put all the fruit in a bowl and tossed it with tapioca, brown sugar, bourbon, and vanilla. The mixture was soupy and smelled (and tasted) absolutely heavenly. Like a cocktail from the deep South. 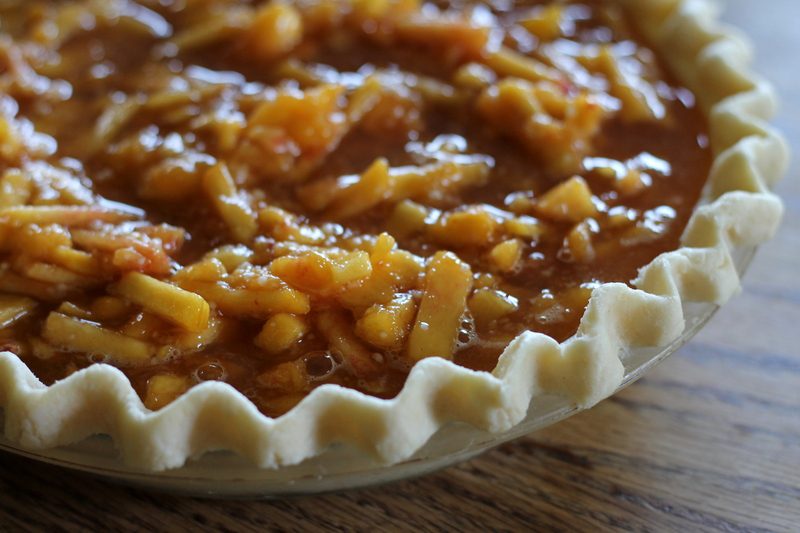 To top the pie, a pastry lid would be nice, or a lattice, but I used crumbs. Not the oatmeal-(and sometimes nut)-based crumbs I’d been using—against the soft peaches, the oats seemed abrasively sturdy, and the nuts were a crunchy distraction—but a barely-spiced, sandy-soft rubble of flour, sugar, and butter that turned craggy and caramely in the oven’s heat. 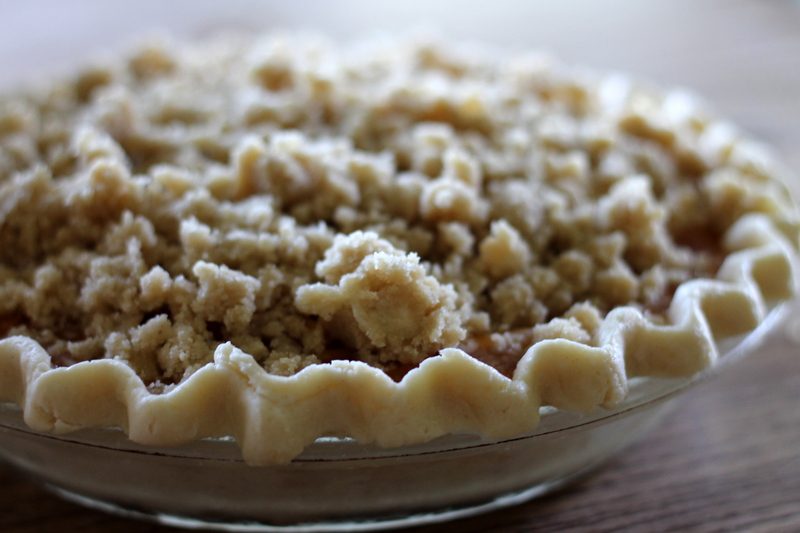 Foreshadowing: this is over-filled. 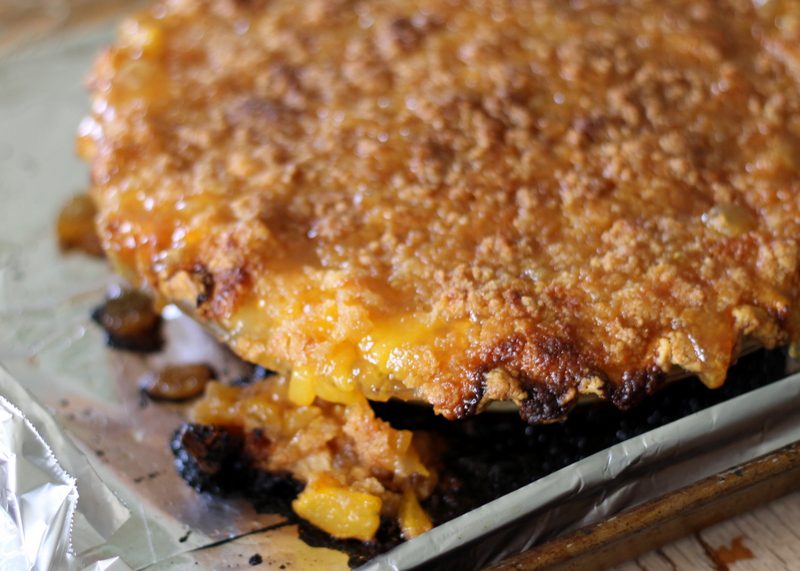 The pie was still slightly warm when we cut into it, so the filling ran all over the place. But even totally cool, I’m pretty sure the filling would still be soft. This is good, though! Saucy pies are meant to be paired with vanilla ice cream. 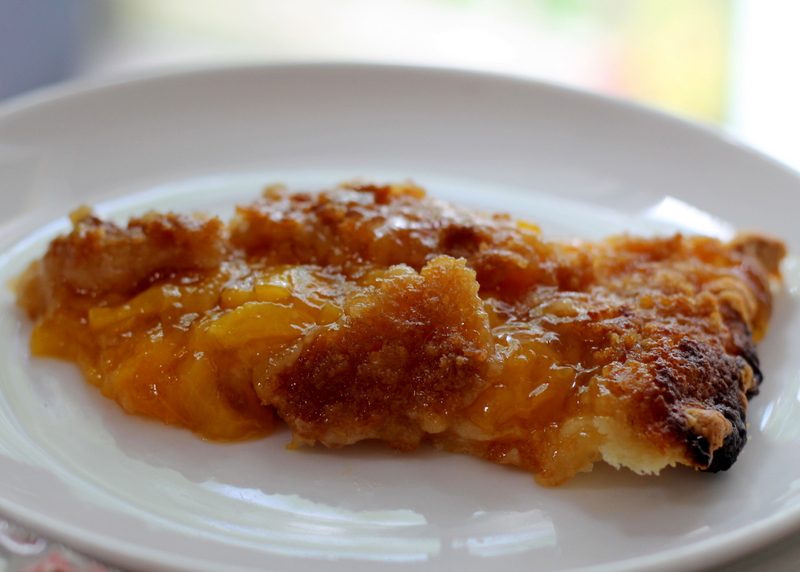 Which I did not have, canyoubelieveit.

And now, in an abrupt turn of events (though not really—you’ll see): in light of the domestic terrorism that happened just over the mountain in Charlottesville, a quote from* this past Sunday’s sermon:

People who believe that what they have is limited and can be ripped away from them are not joyful people.

We’re seeing a surge of white supremacists because they are scared. The more terrified they get, the more they try to spread terror. They are defending the boundaries of their power because they believe it is scarce. They think that if brown, black, gay, Muslim, disabled, or female people get a share of the pie, there will be less pie for those who’ve always had a big slice.

But we are kingdom people. We are Mennonites. We believe in unlimited pie!

So eat up, people! There’s more than enough love, and pie, to go around. 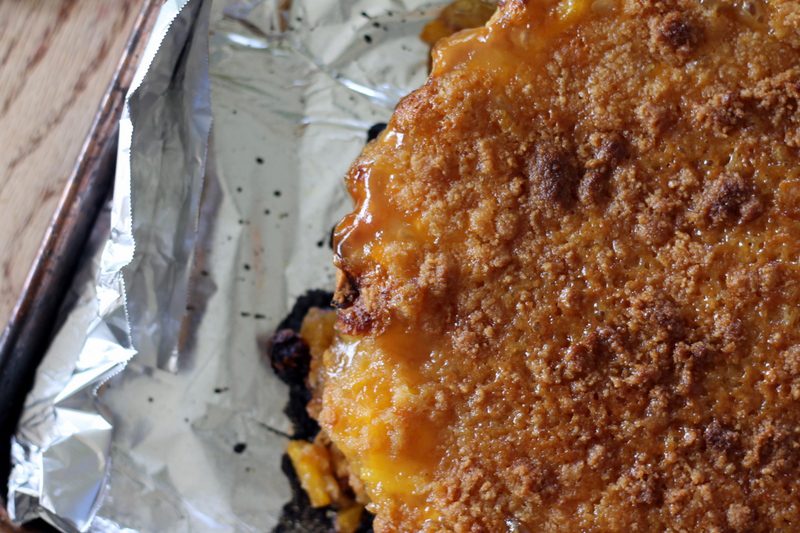 If you prefer a more solid filling, feel free to add another half tablespoon of tapioca.

Roll out pastry and line a 9-inch pie pan. Crimp the edges. Set in the refrigerator.

Roughly mash two of the peaches. The rest, slice thinly and then chop fine so that they resemble matchsticks. (You should have four to five cups of fruit, total.) Combine the peaches, brown sugar, tapioca, bourbon, and vanilla.

Pour the fruit into the pie pan and sprinkle with crumbs.

Bake the pie at 400 degrees for 30-40 minutes, on the lowest oven rack. Reduce the heat to 350 degrees and bake another 20-30 minutes or until the pastry is golden brown and the fruit is bubbling madly. If the fruit starts to spill over, place the pie pan on a foil-lined, sided baking sheet. If the crumbs darken too quickly, place a round of foil on top.

About ¾ of the crumbs is enough for one 9-inch pie. Any leftover crumbs can be frozen.

Measure all ingredients into a bowl and, using your fingers (or a food processor), combine until the mixture resembles chunky sand.