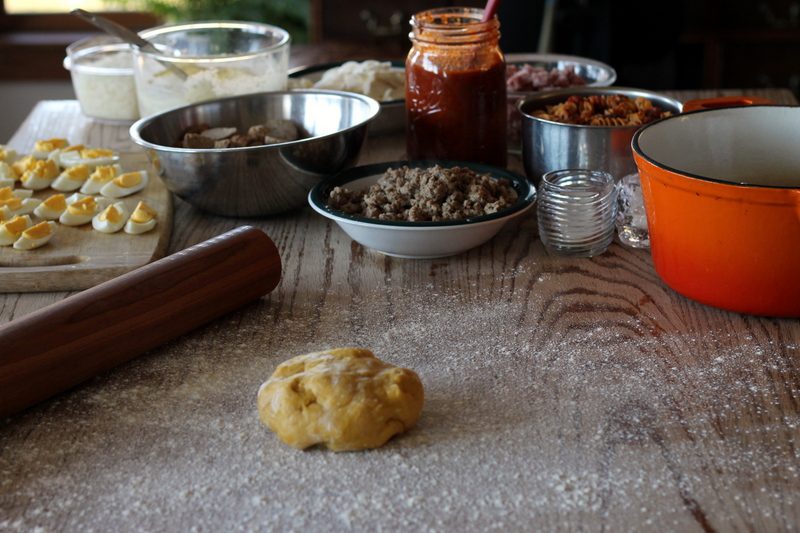 Years ago, my husband and I watched Big Night: fighting brothers, Italian accents, FOOD. I swooned the whole way through. The crowning glory of the movie, culinarily speaking, is the fancy dinner the brothers make to save their restaurant. (But, emotionally speaking, the scrambled egg breakfast scene stole my heart.)

For their big-bang meal, the brothers serve timpano (warning: language), an over-the-top cross between a lasagna, quiche, and empanada … whatever. Basically, just line a deep baking dish with a huge sheet of homemade pasta dough and stuff it with “all of the most important things in the world”—meatballs, hard boiled eggs, pasta, cheeses, ragù, Genoa salami—and then fold the pasta over the top to seal everything up tight and bake it in the oven. 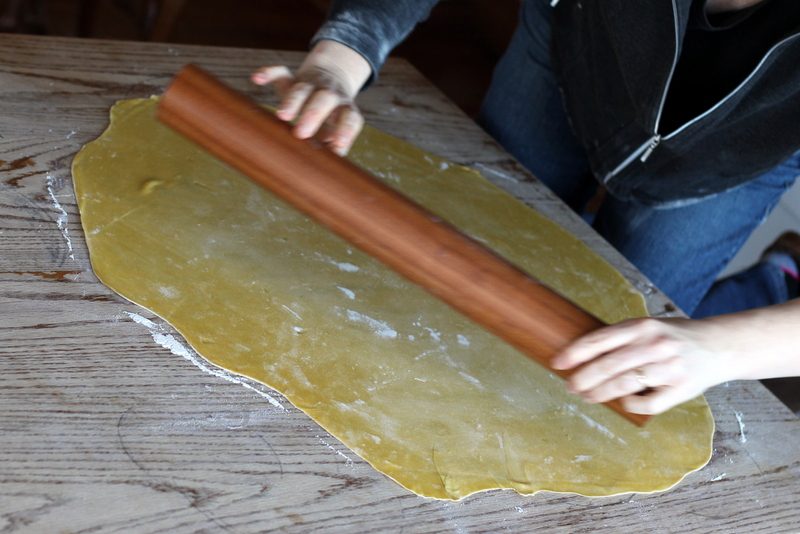 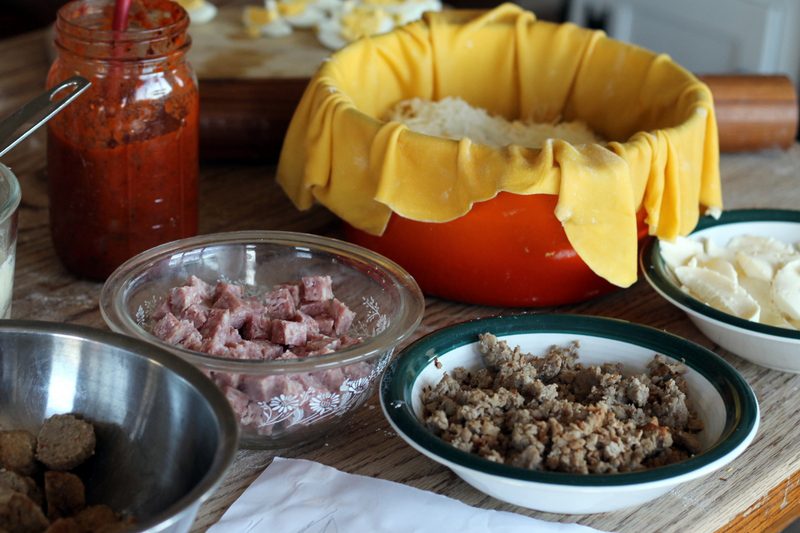 Ever since watching that movie, timpano has been on my mental to-make list. I don’t know why I waited so long or what it was that flipped the recipe to the forefront of my mind, but in any case, a few weeks back, I made it. To prepare for The Food Event, I watched the movie clip several times (really, I could watch it over and over…and I do), read articles and recipes, and sat through a couple youtube videos. I jotted down my plan and assembled ingredients. And wouldn’t you know, once the leg work was done, the actual making wasn’t all that difficult. 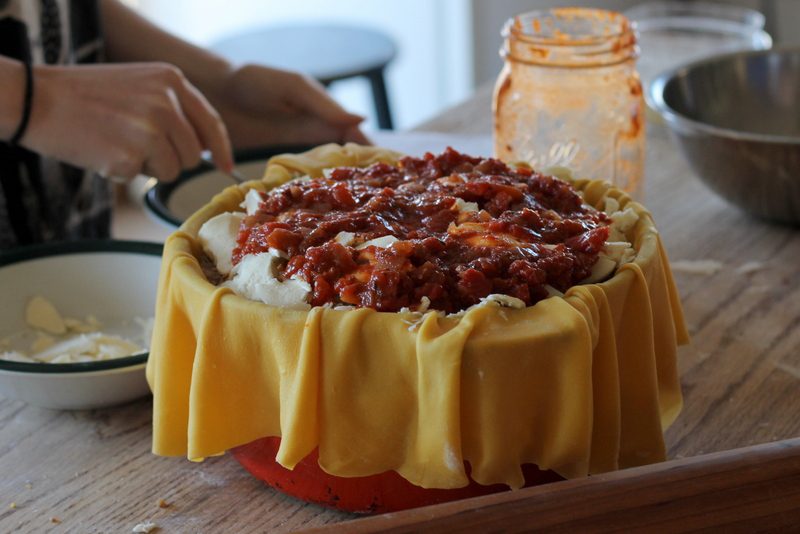 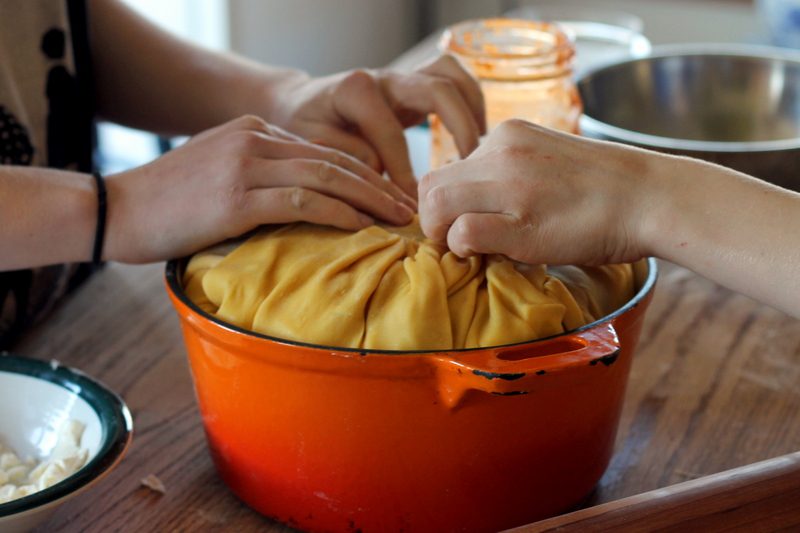 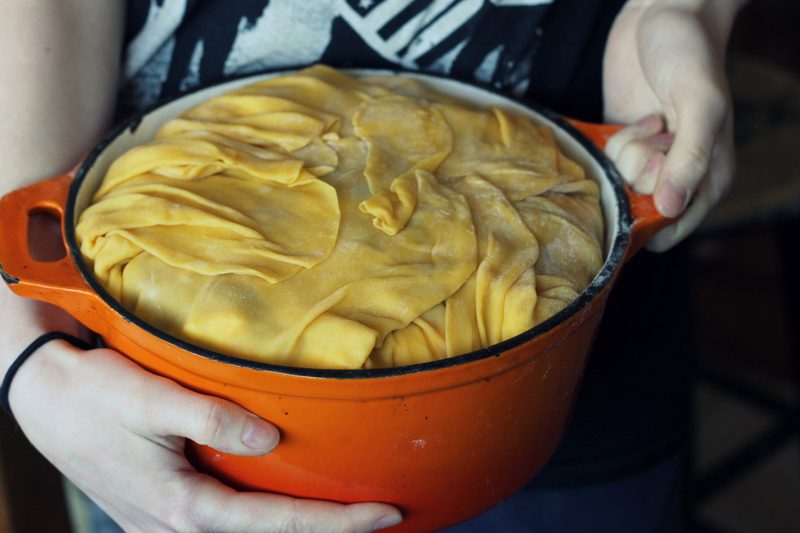 In the movie, the brothers make everything from scratch: the meatballs, ragù, and pasta. But for my version, I took shortcuts. For the ragù, I used a quart of my homecanned red wine tomato sauce mixed with a pint of roasted tomato and garlic pizza sauce. I skipped the homemade pasta in favor of purchased (duh), and I used Costco meatballs. The other prep was mindless: chopping up the fresh mozzarella and Genoa salami, mixing the ricotta with an egg and herbs, boiling the eggs and pasta, frying some ground sausage. 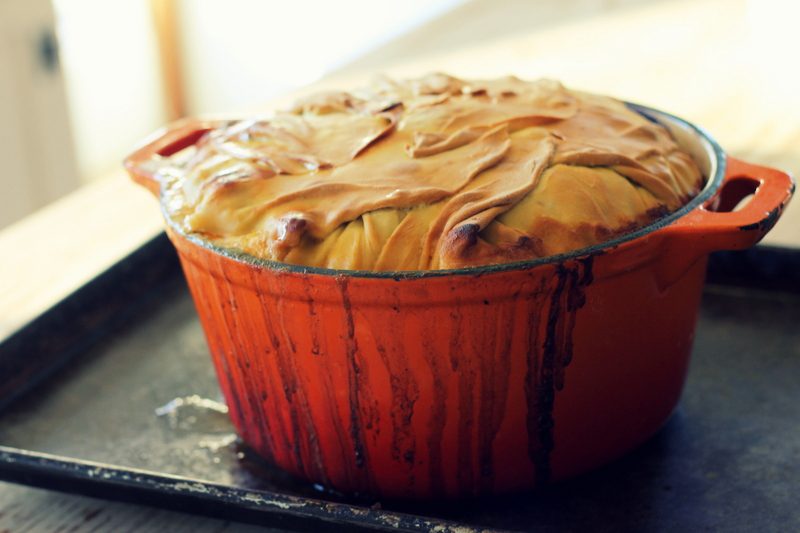 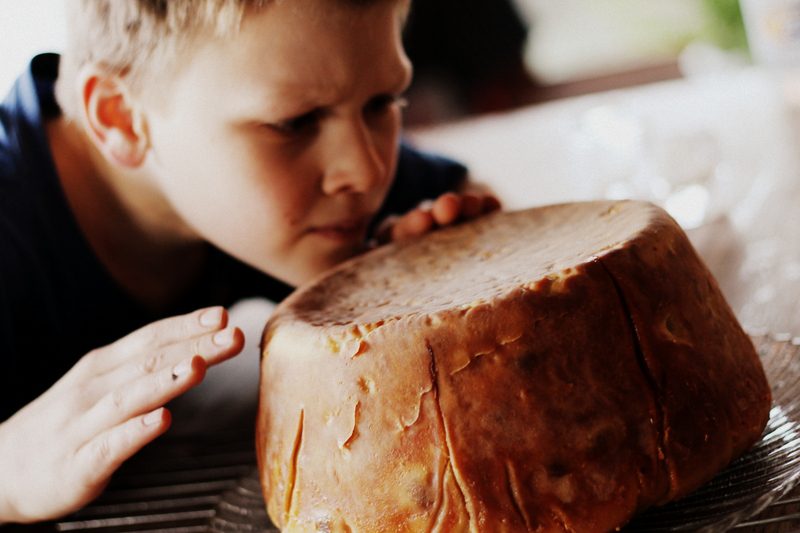 I was a little worried about the big sheet of pasta dough, but I needn’t have been. It handled just like in the movie, thin and not at all tricky. In fact, it felt as solid and pliable as a piece of fabric. I wasn’t sold on the flavor, however. Kind of tough and bland. Next time I’ll increase the salt (my adjusted amount is reflected in the recipe below) and heavily smear the pot with butter to give more flavor. 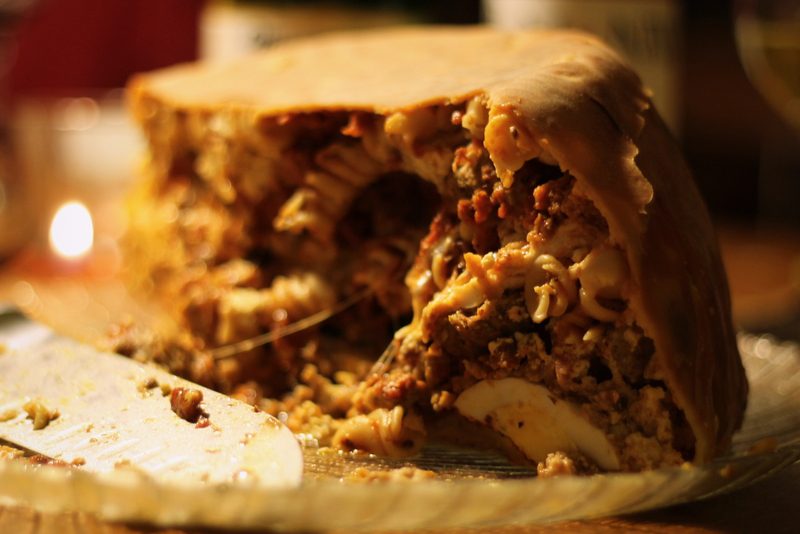 The timpano was, of course, a hit. How could it not be? 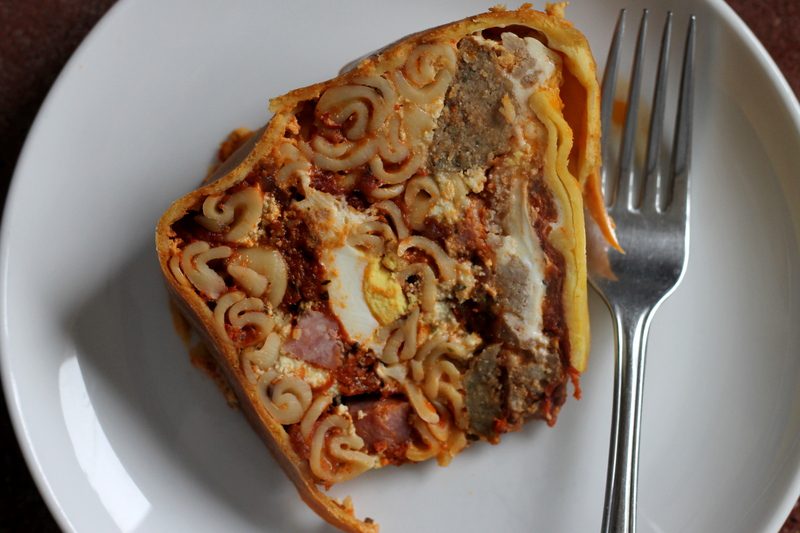 in better lighting: the leftovers

My homemade sauce/ragù was a little watery—make sure yours is thick. Once the timpano is in the oven, you have about two and a half hours of not doing anything which means this a great dish to serve for company or take to a potluck.

Put the flour, salt, oil, eggs, and 2 tablespoons water in a stand mixer and mix on medium (or mix by hand). Add more water as needed, until the dough forms a fairly stiff ball. Cover dough with plastic and let rest at room temperature for 1 hour.

To assemble:
Sprinkle the counter with flour and roll the pasta into a 26-inch round. Generously grease a deep baking dish with butter and line it with the pasta, letting the extra pasta hang over the edge of the dish.

Put half of the pasta in the bottom of the dish. Spread it with half the ragù and ricotta mixture, then half the chopped salami and eggs, half the mozzarella and meatballs, and half the sausage and Parmesan. (Actually, after the base of pasta and sauce, it doesn’t really matter in what order you layer the fillings. Make up your own system.) Using the remaining ingredients, repeat the layers. Pour in the beaten eggs and fold the sheet of pasta up over the top to create a lid. Brush the overlapping sheets of pasta with water to stick them to each other.

Bake the timpano, uncovered, for about 1 hour at 350 degrees. If the timpano is getting too dark, cover it with foil or a lid. If it starts to bubble over, place the pan on a sided baking sheet. Bake another half hour. Remove the timpano from the oven and let sit undisturbed for 30 minutes. During this rest, the timpano will contract slightly. It should not stick to the pan. After the time is up, run a knife around the edge (just to be sure) and invert the timpano onto a serving platter. Let the timpano rest for another 30 minutes (so the fillings don’t ooze out when you cut into it) before serving.