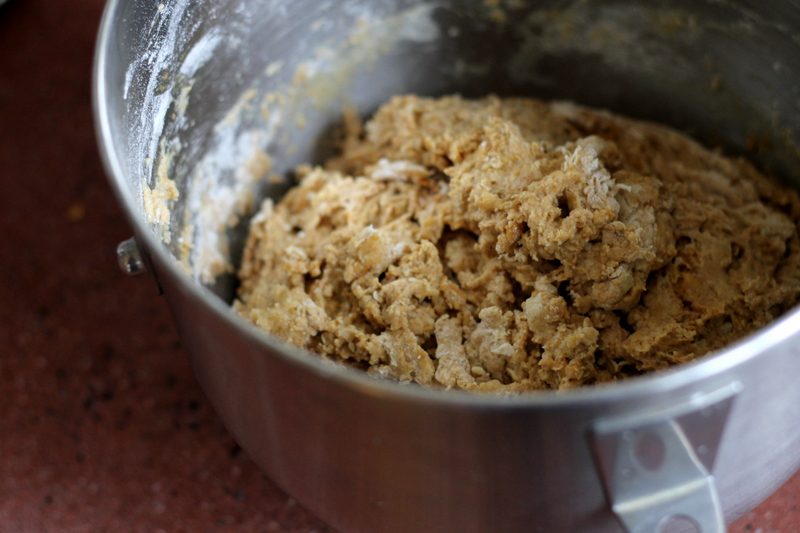 It is after five p.m., the sky is darkening, and I’m sitting on the sofa in front of the fire where I’ve spent most of the day sleeping. I don’t feel awfully sick, but it’s not like me to sleep off and on until mid-afternoon so I guess I am. I did rally enough to clean out the bathroom cabinets, which is totally not my sort of thing, thus making me wonder if my condition is more dire than I first thought.

Mid (one of my many) nap, the neighbor woman stopped by with a basket of grapefruits and oranges. She didn’t know I was sick, and I didn’t even go talk to her—she was gone before I could heave open my eyelids—but all that citrus generosity made me buzzy happy and eventually I toddled out to the kitchen to eat one of each. And then I ate graham crackers, cleaned off the art table, and picked up my (coughing, oh dear) daughter from work. In keeping with my random, sick-girl behavior, I just ate a bowl of potato chips and now I want to tell you about bread, so humor me, please.

We eat sourdough bread most of the time in this here house, but every now and then I get a hankering for fresh bread the easy peasy, commercial yeasty way. So a couple weeks back when I had whole grains on my mind and a large sack of hard red spring wheat in the pantry, I did some old-fashioned recipe perusal and then settled on an oatmeal sandwich bread from Kim Boyce’s fabulous book, Good to the Grain.

It was neither the “oatmeal” part nor the “sandwich” part of the recipe that intrigued me, but rather the recipe’s straightforward method and the bread’s dark golden hue. It looked perfectly wheat-y and whole grainy, exactly the brown bread I was after. So I made it and fell, as is my custom with good recipes and delicious food, madly in love. 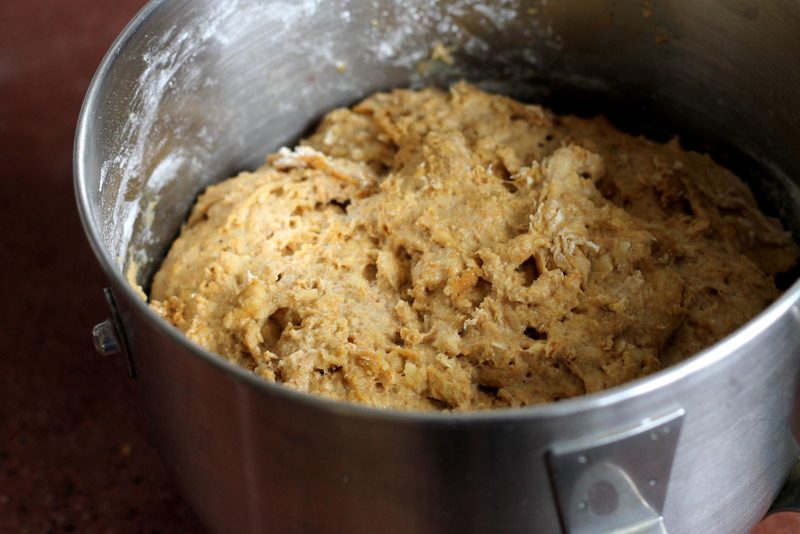 The recipe was a breeze to work with (especially when enlisting a Kitchen Aid) and I learned all about autolyse, which is the delightful and profound process of allowing the ingredients to rest before adding the salt and kneading. Autolyse(ing?) allows for the grains to absorb more of the liquid so the bread stays more moist. And boy, does it ever! The bread was angel cloud, meltingly soft. I was S.O.L.D. sold. 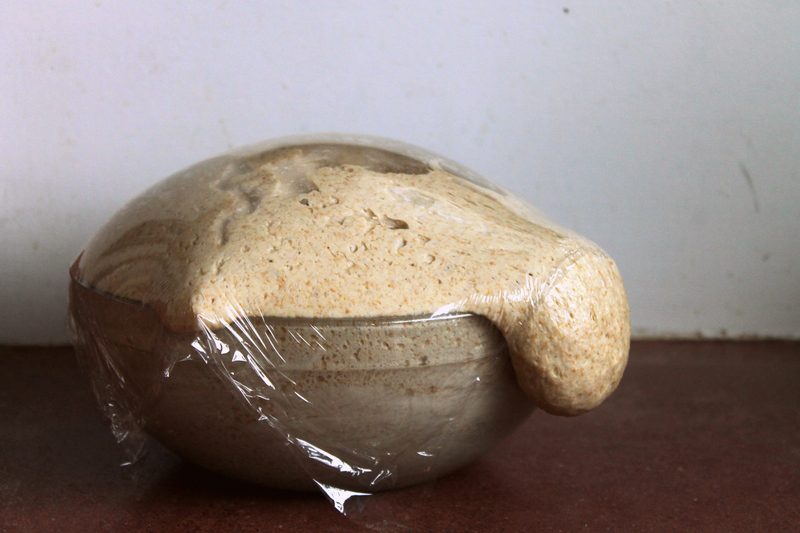 And then, rather by happenstance, I ended up using the fresh bread to make sandwiches—we were running errands or going to the theater or something, so I rustled up a ham salad and slapped together some sandwiches—and then I totally understood why the bread was classified as sandwich material. 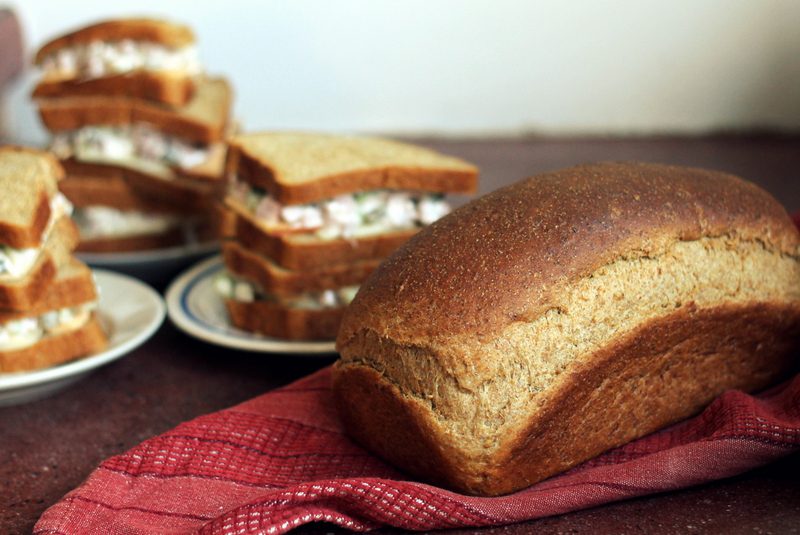 The bread was so tender and soft that it melded to the filling. Sometimes you want a sturdy sandwich bread to stand up to the filling—that’s the way of sourdough—but other times you want a bread that is a bit more comfortable with sharing its space, more accommodating towards textures and flavors, and this, my friends, this is that bread. 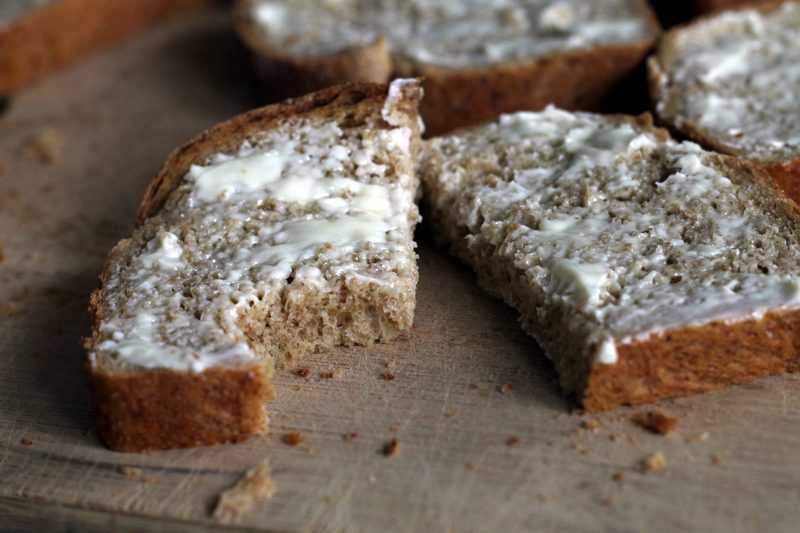 PS. I wrote this post on Thursday. On Friday I felt like a million dollars and made an entire turkey dinner to celebrate. On Saturday, I didn’t feel quite as hot but still managed to muster enough energy to make a batch of this bread. For the requisite turkey sandwiches, of course. 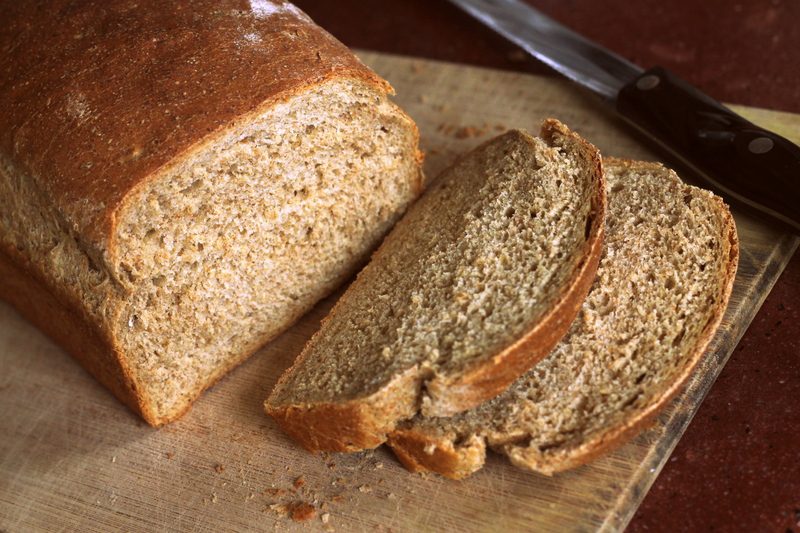 Oatmeal Sandwich Bread
Adapted from Good to the Grain by Kim Boyce.

This recipe is supposed to yield one loaf but I made two. My pans were on the large side so I worried that the loaves would be too skimpy. Turns out, the dough rises well so the loaves shaped up quite nicely (though slightly on the small side).

In a large mixing bowl (or in the bowl of your stand mixer), measure 2 cups of warm water, the yeast, and molasses. Stir briefly and let sit for five minutes until bubbly. Measure in the flours, oats, and melted butter. Mix until just combined. Now, autolyse! In other words, cover the bowl with a towel and let sit for 30 minute. So complicated, I know.

After thirty minutes is up, the dough should be ragged and poofy. Add the salt and mix for 4-6 minutes. The dough will be quite soft and slightly sticky, so, if mixing by hand, you’ll get a workout. (If kneading by hand, be extremely sparing with the flour.) Place the dough into a greased bowl and cover with plastic. Let rise until double, about 30-60 minutes.

Turn the dough out onto a floured surface and divide it into two parts. Shape into loaves and place into greased loaf pans. Cover and let rise until doubled.

Bake the loaves at 400 degrees for about 30-40 minutes, rotating the loaves partway through. Remove the loaves from the pans and let cool before slicing. Make sandwiches!