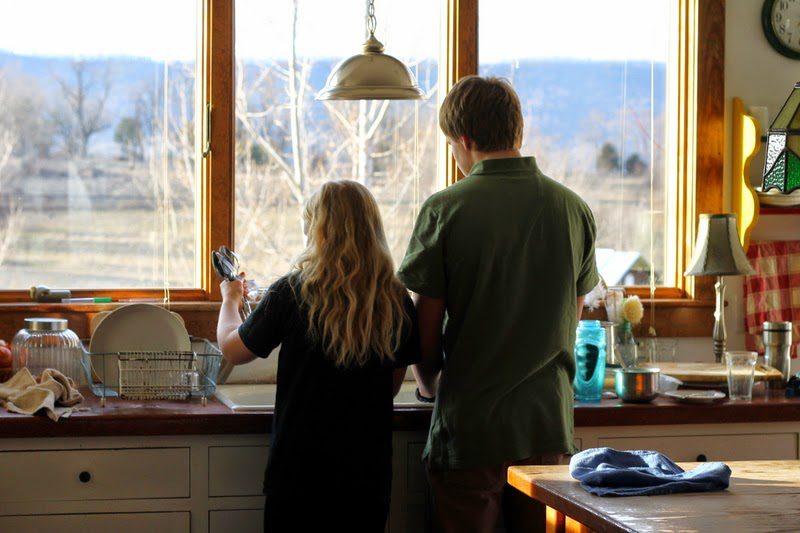 My children are not perfect little angels. The other day, just for the heck of it, I made a mental list of all their sins. My kids:

Granted, they don’t do these things all the time—and not every kid has done every thing on that list—but these things have happened. And when I line it all up like that, I get the urge to laugh until I pee my pants and then crawl under the covers and weep.

I love my children dearly. I think they’re pretty wonderful, truth be told. But, as you can see from this list, I do not see them through rose-colored glasses.

It gets weary, this constant struggle to raise responsible humans. Some days it’s even downright despairing. A child does something outrageously awful—for example, lies intentionally and for an extended period of time (I can not abide dishonesty)—and I promptly sink into the pit of despair. MY CHILD IS DOOMED. SEND SACKCLOTH NOW. (Or else a pair of rose-colored glasses.) But then time marches on, the world doesn’t end, and I eventually climb out of my hole and set about figuring out how to address the problem.

Throughout my years of hands-on floundering—ha! I mean, parenting—I’ve concocted a list of Tried and Trues, techniques to employ in the battle to not raise a pack of hellacious brats. These are methods I resort to because they get results. Sure, sometimes they’re only effective for a short period of time, or for a particular child, but that does not matter. That they worked, no matter how briefly, is sufficient reason to mention them.

Before I start, one thing. I am not a child psychology expert. In fact, I’m pretty sure some of my methods might be found in the parenting books under the section titled “do not do this.” So there’s that.

Also, please note: “working on a problem” is not synonymous with “fixing a problem.” Problems, I’ve learned, ebb and flow. They morph, first appearing in one form and then later in another. Stay sharp.

And another thing. From my experience, ages 9-11 are when behavioral problems are at their worst. (Though we haven’t hit ages 16-19, so don’t hold me to this.) This is when the children are no longer little and excused from real work and yet not big enough to do the jobs quickly. They no longer think work is fun, yet they don’t have the maturity to see the big picture and just get it done.

This is also the age when they get a hankering to do something—such as, build a full-size shop, get a job, compete in the Olympics, etc.—but haven’t the skill set or maturity level to put their ideas into practice. So… there’s lots of time spent practicing how to be mature through the completion of unexciting household tasks.

Tried and Trues: The Techniques
*For swearing: a potty-mouth gets to clean the potty. Or the tub, sink, floor, etc. We’ve tried various consequences and this one smacks a lid on it fast.

*For (extended) fussing about washing the dishes: a chance to wash the next meal’s dishes. And the next and the next and the next. I say, “You’re a smart kid. I think you’ll soon figure out how to be a cheerful worker. Then again, it might take you several days. Maybe even several weeks! But that’s okay. I can be patient. I’m here to help you for however long you need.” They usually catch on pretty quick.

*For when a particularly bad name-calling name has become a habit (for example, “stupid” or “idiot”): first, a warning that they need to make a concerted effort to stop using those words. Then, if they need outside help, the use of the word equals the loss of dessert. Only sweets for the sweet(mouthed)!

*Excessive fighting with a particular sibling: no friends until they learn to get along. Because if they can’t treat family members kindly and respectfully, then I certainly can’t let them relate to other people because they might mistreat them. (We all know that’s complete bogus—they adore their friends and wouldn’t dream of being nasty to them—but my point holds true. Family relationships come first.) How do they prove they’re getting along again? They have to play games together (each person suggests three ideas and then they agree on one), do work together, have friendly conversations together—whatever they want, but I have to see some genuine camaraderie and happy togetherness for an extended period of time.

*Scratching: lost long-nails privileges. For some reason, it’s only the girls that have trouble scratching, and they both want long nails (which I abhor), so this works great.

*Slamming things around: a fine (the amount depends on the child and the level of the problem) which goes into our household budget. Reasoning: things wear out more quickly when they are mistreated and it takes money to replace them.

*Breaking things: cost of the item and/or help fixing it.

*Refusal to go to church or take part in a family activity, such as read aloud time (these aren’t common and usually just a result of a bad attitude): loss of permission to participate in a coveted family time, such as movie night. Usually, just a reminder of the consequence is necessary. I don’t think we’ve ever had to follow through on this one.

*Incessant negativity and bickering: I dole out little jars of jelly beans or M&M’s for each kid and then pick one from their jar (and eat it) every time an offense is committed. It’s a calm and tasty method. Another option: articulating several positive things about each person they are currently mistreating.

*Problems with not coming when called, or not obeying promptly: a rapid series of jobs. After each task, the child is to immediately report back with a “what next, Mama?” This continues until the child is cheerfully and promptly completing the tasks.

*Hitting: time out. Depending on how things went down, restitution may be required.

*Lying: loss of trust equals less privileges and much more supervision. It may take days, weeks, or months for trust to be regained. This one is hard.

*For sloppy work: more chances to improve skills because, obviously, they need them!

*For pokey work: a timer. If the task isn’t done before the timer goes off, the child gets another opportunity to practice the task and hone her speed demon skills.

*Obnoxious shrieking and yelling: banishment to the outdoors for a minute or two. Eventually, they get tired of having to step outside and remember to control their voices.

Perspective Keepers and Sanity Savors
Tip Number One: space to be
Sometimes children are going through a rough stage thanks to hormones, getting up on the wrong side of the bed, whatever. These periods can last hours, days, or weeks. Sometimes, to cut myself some slack, I put a moratorium on consequences (because I’m the one who has to follow through, see) and instead focus at holding things steady. During this rocky spell, the child gets no friends and no special activities (but is not cut off from regular family stuff—I’m not a fan of exclusion), gets lots of quiet time, and has a decrease in chores and studies. Sometimes a person just needs some space to be grumpy. Later, when the child is coming out of his funk, we talk about the consequences, if there are any. By that time, the child is usually ready to do what needs to be done in order to move forward.

Tip Number Two: grace
My husband has ADD. This means that he is constitutionally unable to be consistent, follow through, and stay calm—three major points that all parenting gurus say are absolute necessities for successful parenting. In other words, according to them, my husband is screwed.

After years of struggle and lots of feelings of inadequacy, we landed upon a saving grace via some experts. These guys said that ADD parents needn’t beat themselves up for being inconsistently explosive. Rather, they need to make efforts to have positive experiences with their children: tell jokes, hang out, hug, work together, whatever. And it works! Lots of stuff can be done wrong, but toss some serious loving into the mix and there’s grace.

What techniques do you employ to combat bad behavior?
How do you keep perspective in the midst of the ups and downs?
***

*The title of this post comes from my father-in-law. He says it in reference to marriage, but I think it stands true for parenting, too.

This same time, years previous: the quotidian (1.27.15), swimming in the sunshine, Friday evening fun, down again, shoofly cake, and gripping the pages.