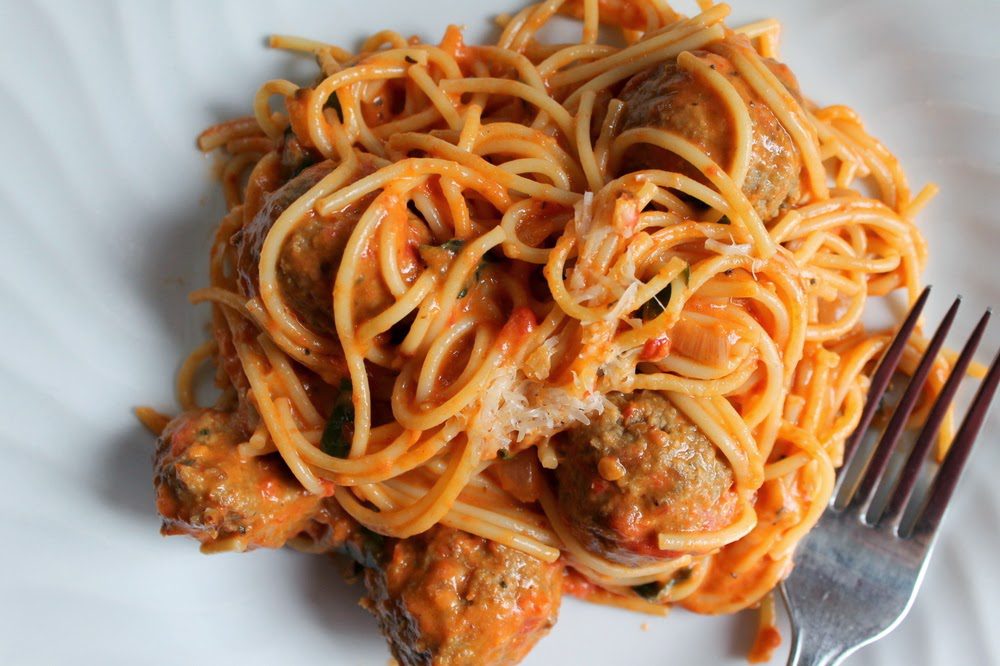 Yesterday—Monday—I had nothing on the calendar.

No rehearsals.
No shows.
No canning.
No freezing.
No doctors’ appointments.
No nothing.

Since the weather was cool and overcast, I decided to spend my morning cooking actual food. I’ve had so many things on my to-make list, but what with all the Busy, I’ve only succeeded in getting by with the bare minimum. So while the children played, I caught up on my NPR shows and made granola, yogurt, a chocolate cake, and the base for salted caramel ice cream. It was just the kind of day I needed after the rush-rush of the last couple weeks. And then, to top off the perfectness, I made a supper worth writing about, whoo-hoo!

Two things:
1) When I was in NYC this past winter, I had ravioli in a vodka cream sauce at Carmine’s. The ravioli was nice, but the sauce was spectacular. Upon my return home, I researched recipes but none seemed right. The end.
2) When we were in Guatemala, one-pot spaghetti was all the rage. I tried it and hated it. The end.

Except not the end. Enter, just yesterday, a friend’s Facebook status update: We made a vodka-cream-tomato sauce…

Of course I begged the recipe, and shortly thereafter he obliged with a follow-up post that began with a sentence that could not have been more straightforward:  This is a post about how to cook pasta in one pot. After a flurry of questions and answers, I set about making the spaghetti to end all spaghettis.

My friend’s method is direct, just like his opening sentence. Saute garlic and onion. Add five cups of liquid (stock, water, tomato juice), some tomato sauce/paste, chopped tomatoes, and seasonings. Boil. Add the spaghetti, and when it’s almost done, add the vodka and cream. Toss in the precooked meats, if desired, and add lots of chopped fresh basil. Transfer the whole glorious mess to a giant serving bowl, sprinkle with Parmesan, and serve.

I was a bit nervous, starting out. Carmine’s vodka cream sauce was nectar-of-the-gods good, and that one-pot pasta was such a pile of muck. Turns out, I needn’t have worried. Each taste test along the way lightened my mood, and by the time I added the vodka and cream I was practically tap-dancing around the kitchen, pausing every time I passed the stove to slurp the sauce.

The family fought over the spaghetti. At one point, my husband even tried to steal my older son’s entire plate (no luck). There wasn’t one speck of pasta left over, but the delicious memory lingered well into the night when I dreamed, no joke, of Carmine’s. Except that meal, in my dream, was flavorless and cost 600 dollars, so I’ll happily stick with my new favorite homemade recipe, thank you very much.

The key is five cups liquid to one pound of pasta. I used water with chicken bouillon and the juice from a can of strained tomatoes. I added the drained chopped tomatoes and then a pint of pizza sauce for richness. You can play around with types and quantities of tomato products, but don’t mess with the quantity of liquid.

In a large stock pot, saute the onion and garlic in the olive oil. When the veggies are tender, stir in the pizza sauce, chopped tomatoes, liquid, salt, pepper, and sugar. Bring to a rolling boil. Add the spaghetti. Cook for 8 minutes, stirring frequently. When the spaghetti is almost done, add the vodka and cream and return to a simmer. Add the precooked meat and fresh basil. Transfer the pasta to a large serving bowl and sprinkle with Parmesan.

A word about the play: people are really enjoying it! Comments I’ve heard include, “It’s really funny,” “This may be the best thing I’ve seen at Court Square Theater yet,” “Everyone was crying,” and “What a great story!” We’ve got four more shows this weekend! I hope to see you there!