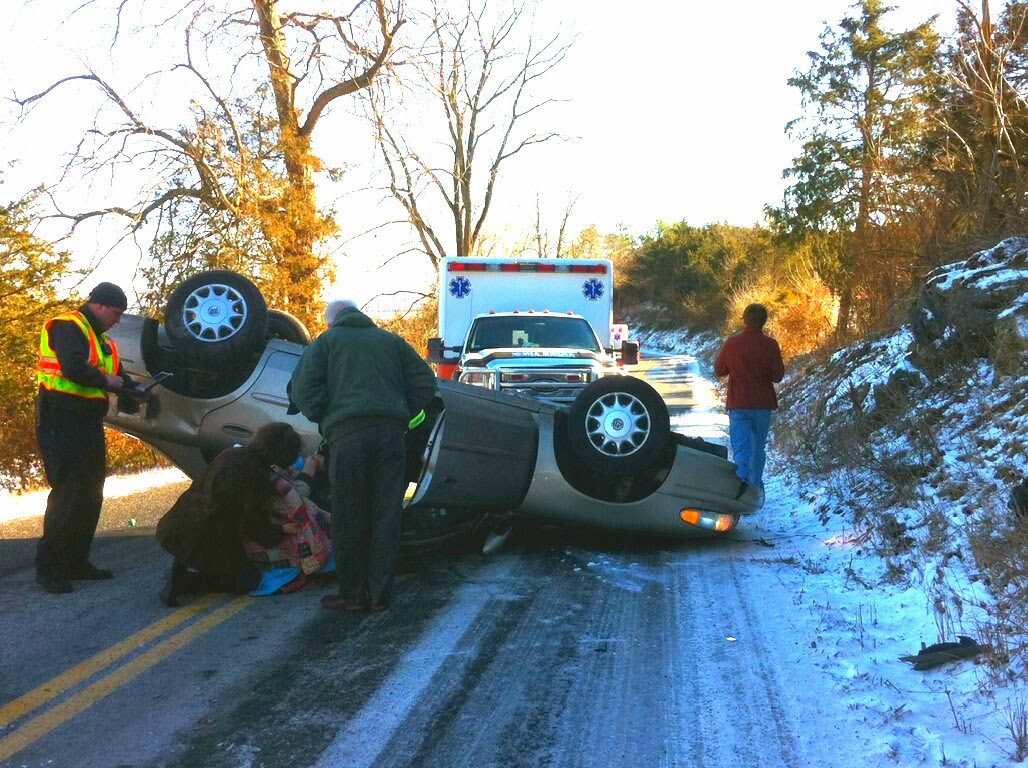 Or, Why You Should Leave Your Door Unlocked So People Can Borrow Your Butcher Knives.

When the kids and I drove into town this afternoon to go to the library, the roads were icy. For several country miles, we followed along behind a nondescript car going a nondescript speed. Everything was normal.

Coming out of an s-curve, the nondescript car slipped into a sideways slide. Its back end fishtailed into the left lane. I said something profound like, “Whoa, guys. Look at that.” And then the car moved forward off the road to the right, except there was a steep embankment in its way, so it reared up and then flipped gracefully over onto its back, crunch.

I don’t remember braking. I do remember jabbing wildly at the emergency lights, barking orders at the kids, and thinking, I am the only responsible adult here, oh crap.

I sent my older son up the road on the other side of the car to stop traffic. My younger daughter ran back to the house we just passed (which happened to be the house of our long-time friends), and I told the younger two that they were not to move, not even to unbuckle their seatbelts. Every single child obeyed me to the letter. This rarely happens, so I’m noting it here. Applause is appropriate.

I ran up to the car. There was a woman in it, hanging upside down by her seatbelt.

Folks, there is something grotesque about a belly-up car with a person in it smack in the middle of the road. It’s disorienting. Cars are meant to roll on wheels at all times. Somersaulting and sticking their spinny legs in the air is simply not acceptable. What’s next: talking cats and dogs?

The doors wouldn’t open. I had to crouch down on the pavement to see inside. How many people are there? I yelled through the glass. One, she said. She was cool as a cucumber.

By this time, my daughter was heading back, the neighbors in tow. Except it wasn’t the neighbors we knew, but guests that were staying at their house. I hollered at them to call 9-1-1 (“I never heard you yell at anyone to call 9-1-1 before!” my kids told me later, all impressed), and then we started working to get the woman out.

Me, being all first responderly with some blankets.*

Her door finally opened (maybe she figured out how to unlock it?), and the neighbor/guest helped her turn the car off. We still couldn’t unbuckle her seatbelt, though. So I sent my son back to the house to get a knife.

“They never lock their doors,” the houseguests confided.

“Yeah, I know,” I said. “We sometimes stop by to grab rags for dog vomit or to use the bathroom.”

It was reassuring to know that in the midst of flipping cars and freezing temps, we had a fully-stocked house at our fingertips. It was a piece of sanity in a sea of weird.

Soon my son came running back (yeah, I know, running) with two knives. The neighbor-who-is-not-really-our-neighbor cut the belt, and he and my son carefully extricated her from the crunched cave. We sat her on a towel and wrapped her in a blanket, and a couple minutes later the ambulance arrived. (And then another. And then a fire truck and two cop cars.) I wrote out a statement and off we went to the library.