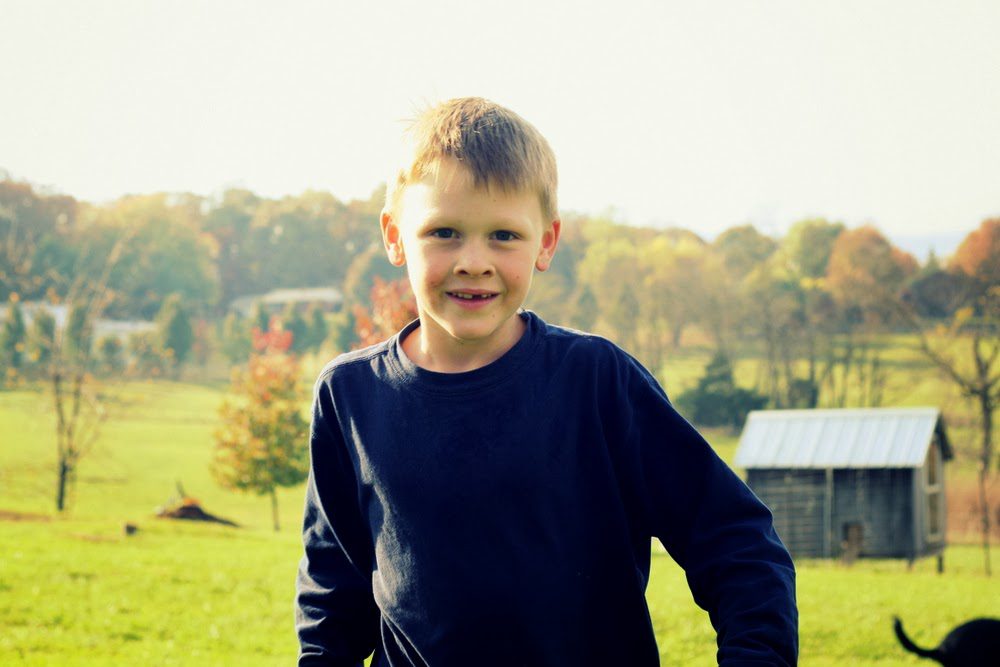 Our younger son is a whirlwind of energy, spinning, running, bouncing, wriggling, burrowing, crashing. His raspy foghorn voice has no volume control. It’s like we’re living with a cross between a caffeinated squirrel and a cyclone.

Thing is, he’s real sweet about it, most times. He charges full steam ahead with whatever he’s doing—drawing, hauling small trees indoors, playing flashcards, washing the floor—completely oblivious to the fact that we’re talking to him, yelling at him, screaming for him to PAY ATTENTION FOR ONE MINUTE PLEASE. He’s cheerful, funny, and smart. He’s cuddly. And he doesn’t stop.

Take, for example, the play I already alluded to. It was a fun play, a comedy, and we sat in the front row. On two separate occasions, my son was called on to help: once to pick up matches and push the guy up the stairs and another to help adjust a kingly robe. My son should’ve been engrossed and bedazzled, motionless with enthrallment. Instead, he was rocking from side to side, wiggling, groaning, half-way falling out of his chair. Desperate, I grabbed a piece of paper for a game of tic-tac-toe. Then connect four. Then I rubbed his back. But he gave me loud directions about exactly how I was to rub his back, so I picked up the paper and wrote, “You must be quiet.” He whisper-sounded it out, and then, thrilled at his accomplishment, gleefully repeated it over and over again, loudly. After the show, we sat him down in a chair to practice being quiet and holding still. I expressed my disappointment at not being able to enjoy the show because I had to play games with him. “But Mama,” he said between sobs, “you were the one who wanted to play!”

More recently, there was the seven-hour car ride home from New York. I read out loud to the family and then we settled in for a movie marathon: two in a row followed by an episode of the Waltons. Part way through the second movie, my son started scrunching around in his seat and whining. By the time we got to the Waltons (and the last hour of the ride), he was crying and writhing in white hot agony.

And that’s when it hit me: this child has to move. Sitting still for any longer than a short period of time causes him to short circuit. It’s not his fault. And at the same moment I realized that, I knew the perfect solution. “Give me your hand,” I said. As soon as I dug my fingers into the soft of his palm, I felt his body relax.

For years now, we have given him back rubs during church services, but it wasn’t until this week that I realized why they worked so well. His muscles need help releasing all the pent up energy (or something like that). Isn’t it funny how it takes so long to catch on sometimes?

It’s still not easy. Having a twitchy kid that talk-bellows without ceasing will probably never be exactly soothing. Several times during family reading last night, I broke off in the middle of a sentence to roar SIT STILL and SHUT YOUR MOUTH and KEEP YOUR BUTT DOWN, DON’T STICK IT IN THE AIR. It’s hard to read words when the sofa won’t hold still for all the flopping and jittering.

Now that our son is nearing eight, I’m realizing that his energy levels aren’t the byproduct of early childhood. This is who he is so we might as well adjust and get used to it, heaven help us.