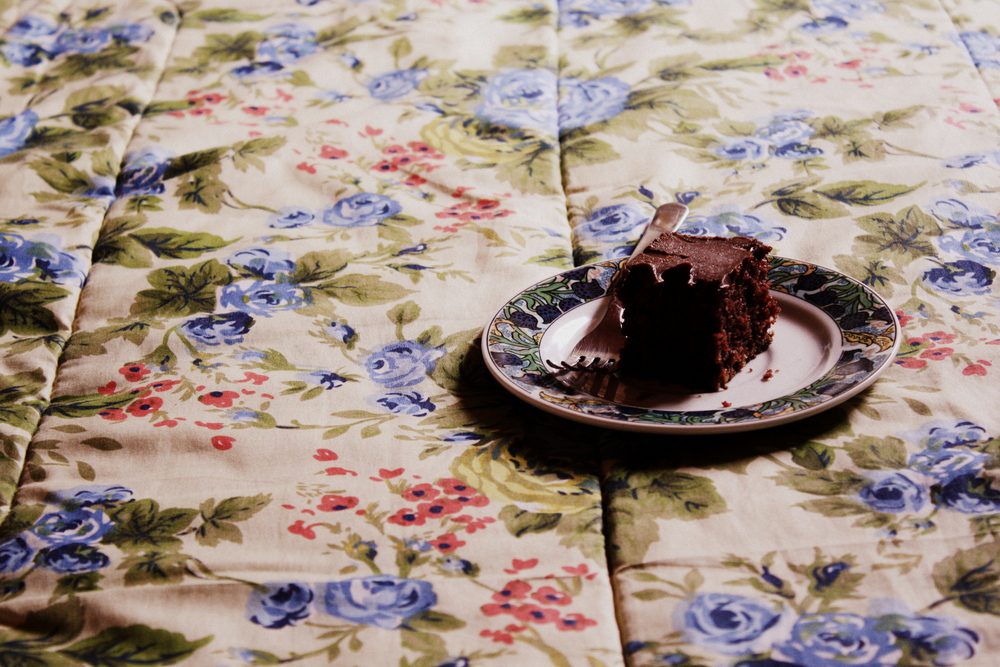 One of the things I miss most about the States is my kitchen. I miss the plethora of ingredient choices, the crazy-full pantry shelves and freezers, the ability to concoct and create with abandon, the space to stash my many creations, and the hungry friends and (non immediate) family who eat what I make. I miss having meat on hand. I miss Dijon mustard and the challenge of saying no to the non-local stuff (when I want to) and reading ingredient lists and buying organic when I think it matters. In other words, I miss being An Elite Eater.

To be clear, I’m not suffering any. To the contrary. We have an abundance of food. Our tummies are filled up frequently, and we even overdo it, on occasion (some of us more than others). We eat lots of veggies. There’s dessert.

I don’t remember this restricted feeling being quite so…severe…when we were living in Nicaragua. Back then, we were newly married. I loved to cook, but I hadn’t found my groove yet…or as much of a groove as I would develop over the next decade-plus.

Since then, my recipe book collection has grown exponentially. I’ve discovered food blogs in all their excessive glory. Glossy cooking magazines show up in my mailbox. I collect liquors and chocolate and unusual grains and legumes. I have my own home with a huge garden, two big freezers, hundreds of canning jars, two regular canners, and a state-of-the art pressure canner that I’m scared to use. And we are six people instead of two—a lot more food goes down the hatch.

Stepping back this time around hasn’t been easy. In many ways, I’ve been forced to become a worse cook, not a better one. I’m regressing from butter to chemically-laced margarine and shortening, from our homegrown tomatoes to pesticide saturated red orbs, from brown rice to white, from sweet corn to field corn, from real vanilla to fake.

This second-rate cooking goes against every fiber of my very being, and at first it was downright offensive. The plastic-wrapped slices of processed cheese made my skin crawl. The kool-aid flavored tomato sauce that passed as ketchup made me want to spit. The waxy dipping chocolate coated my mouth and tongue like chocolate-flavored castor oil (it still does). I was doing everything backwards and it felt wrong.

But slowly, I’ve grown accustomed to this new way of doing things. The fact is, people the world over don’t have the food choices I’m accustomed to. It doesn’t mean that I shouldn’t make good choices when I have the chance—and I can hardly wait to place an order for a 50-pound sack of organic oats—but doing things this way probably won’t kill me. Food options, while fun, necessary, and important, aren’t the be all and end all.

(Saying this does not mean I won’t be all over the deer balogna, canned peaches, wine, hard pretzels, and whipping cream when I get back. Because I will.)

(Also, mine is the angst of a newly relocated and slowly adapting person. With time, these aches and pains will—or would, if we were staying longer—fade.)

(Also, it’s not that Guatemala is without it’s own wonderful food discoveries. Tayuyos (more on these later)! The Anna Belly strawberry jam has whole berries in it! The cornflakes are so good—a blend between Special K and regular cornflakes—that we’re contemplating bringing back an entire suitcase of them! The yogurt has a runnier, more natural texture, and there are real fruit chunks in it!)

When we first arrived here in Guatemala, I was cooking for survival: simple foods, high calories, lots of eggs and lots of bakery breads. I was aiming to keep the children full, to provide them familiarity and safety via their plates, and to not irritate their occasionally roiling bellies.

But now I’m branching out, pushing them more, introducing new foods, serving more than one course, making desserts that involve more than spreading icing on store-bought crackers. The other night, we had leftover sweet-and-sour lentils and rice, some sauteed chard, broccoli with a lemon-garlic-butter sauce, roasted white potatoes, fresh red cabbage (contributed by our dinner guest), a salad of roasted carrots and sweet potato with avocado, and the crowning glory, hot apple pie with a real butter crust and vanilla ice cream. It was the most variety, and for sure the most vegetables, we’ve had at one sitting since we’ve been here. It was glorious.

I’m learning things, too. I’m learning to stock up less and use up more. I’m learning that cooking red beans with one dried hot chili lends a lovely flavor to the whole pot, that cookies made with shortening can be every bit as addictive as those made with butter, that granola is a non-negotiable and it doesn’t need to involve much more than oats, sugar, oil, and salt, that packaged tomato sauce is delightfully easy and tasty, that reconstituted powdered milk can almost pass for delicious, and that chocolate cake doesn’t need much chocolate to still be scrumptious.

This last one was a real shocker. I’m forever being wooed by the darker, richer, denser, and sexier. (We’re talking about chocolate here, not men. I’ve already got The Man.) It turns out, however, that a barely-chocolate-y chocolate cake can be plenty delicious, too.

I learned about this cake when I sent out my plea for simple recipes for my baking class. I got a boatload of recipes via Facebook, blog comments, and emails, and they’ve all been carefully scrutinized and filed (thank you!). One of the recipes I made straightaway (along with the pineapple upside down cake and the mango coffee cake) was a chocolate mayonnaise cake.

I am already quite familiar with mayonnaise cake—cake that uses mayonnaise in place of butter or oil—but this recipe leaped out at me for two, no three, no four, reasons.

1. Cocoa is expensive and a bit of a luxury ingredient—home cooks don’t use it much—and this recipe called for a minuscule amount: not quite three tablespoons for a 9×13 pan (as opposed to the more typical 12-plus tablespoons).
2. Mayonnaise is The Condiment of Choice here. People put it on everything from corn-on-the-cob to french fries to pizza. Mayonnaise in cake is just the next logical step.
3. No fancy equipment required, just a spoon and a bowl.
4. No eggs or milk means it’s cheaper to make!

I made the cake once and we liked it, but it was so thin that I had trouble taking it seriously. The second time, I doubled it, iced it with some leftover frosting, and the fans went wild. I made it again this week because I’m experimenting with a non-butter frosting recipe to teach to the girls and I needed a place to put it…and because I wanted more cake.

I’ve taken to calling the cake Depression Cake because it’s a cutting-back recipe and because the allrecipe contributor said her mother made it during the Depression. Also, because I already have a there-is-not-anything-depressing-about-it chocolate mayonnaise cake in my repertoire. 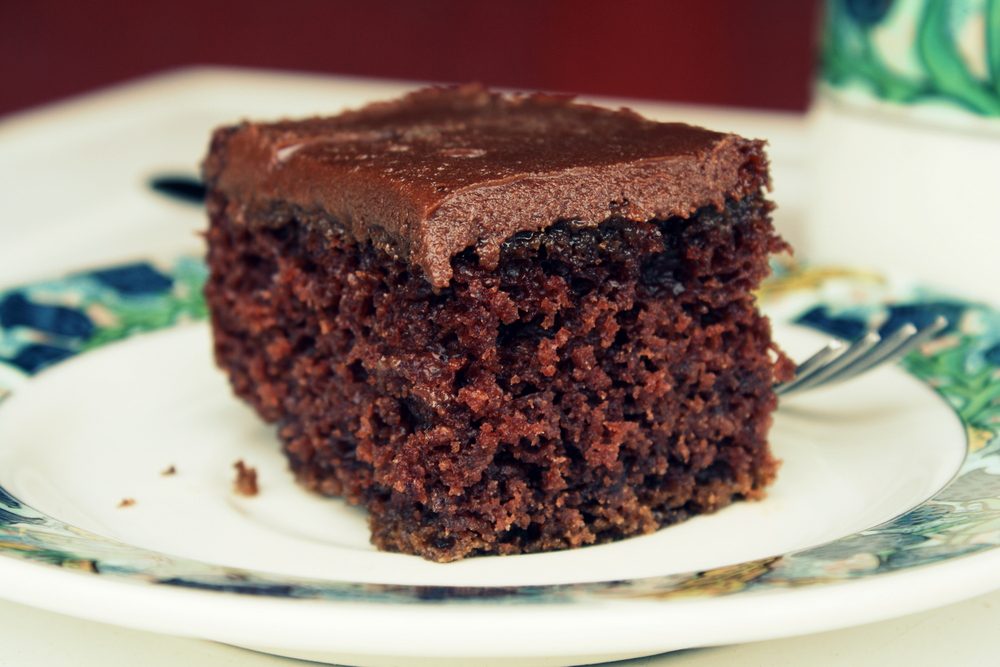 Depression Chocolate Mayonnaise Cake
Adapted from allrecipes. My friend Christine, a mother of four who is currently living in Germany, pointed it out to me. Christine says that in lieu of icing, she simply dusts the cake with powdered sugar.

Stir together the dry ingredients and blend in the wet. Pour the batter into a greased 9×13 baking pan. Bake the cake at 350 degrees until the edges are starting to pull away from the sides of the pan and there are cracks in the top. If icing or dusting with powdered sugar, allow to cool completely.