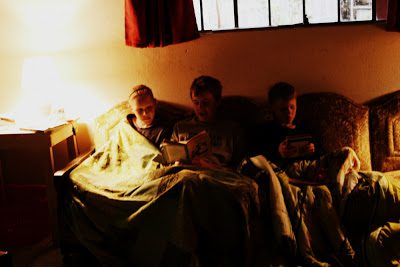 This week—Holy Week—the entire country shuts down. Our children are off school and we’re off work. Also, because it’s a crazy busy time at all the vacation hot spots (read rivers, ponds, and beaches), travel is a sticky mess and prices are jacked through the roof. Therefore, we opted to go Nowhere. (I told you we aren’t any good at being tourists.) In other words, we are having a self-imposed staycation.

The first part of the break was taken up with my brother and church and regular stuff. But then on Tuesday, while my husband was spending 12 hours on buses, the kids and I found ourselves at home with nowhere to go for an entire day for the first time in forever, or at least a couple months.

As homeschoolers, this used to be a common occurrence. Many days we’d just be banging around the house together, reading, cleaning, cooking, studying, fighting, writing, etc. But since we’ve been here, we’ve been on an entirely different schedule. We get up early and then go our separate ways for hours on end. A strange woman shows up at my door to mop floors and scrub the toilet. There are neighbor kids to play with and lots of errands to run and then we shut down the day extra early so we can do it all over again the next day.

I like this routine we’ve carved out for ourselves. It’s reasonable and fairly balanced, as far as schedules go. So with an entire week of no childcare (I mean, school) and no house help (oh crap) looming before me, I panicked just a little.

“I don’t know how those homeschooling moms do it!” I fussed to my husband before bed one night. “How do they live with their kids all day long? I’m going to go out of my mind!”

But I’ve been pleasantly surprised. After that awful Sunday, things have gradually gotten better. The kids are settling down and sinking into our agendaless existence. I didn’t realize how pushed we’ve been to get up, get out, and go, go, go. Even though ours is quite the laid back lifestyle, it’s a lot more than what we’re used to.

So Tuesday morning, I woke up to the sound of a steady rain on the tin roof and my older son’s voice droning on and on as he read Mrs. Piggle-Wiggle to the other kids. We spent the day doing some Spanish study, reading aloud about the aboriginal people of Australia, and playing Spot It. I made granola and the kids played Ticket to Ride. We had rest time and writing time. Things went downhill around 4 pm, but we worked it through and ended the day with a couple chapters of The Phantom Tollbooth. 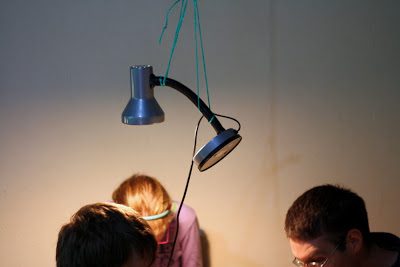 Yesterday, the rain continued—the only difference was that my husband was here with us. There was more book reading and Spanish study. My husband got out a 1000-piece puzzle and then rigged up a light so we could distinguish between the varying shades of blues and greens. I don’t think we’ve ever done a puzzle together, but we are, amazingly enough, very into it. 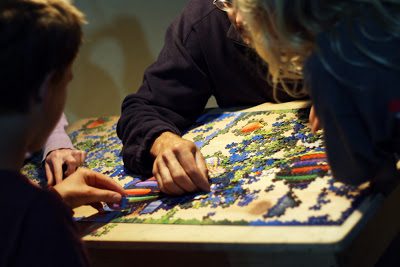 Before we left to come here, a wise friend told my carpenter husband: You are not going to Guatemala to build anything. You are going to build a family.

I always thought we had kind of already built a family, but I’m beginning to see what he meant. It’s different here, removed from all we know and rely on. Here it’s just us. We’re still the same people, very much so, but we’re growing and changing together. Sure, we still fight like cats and dogs, and yes, we get homesick and cry for our stateside friends, family, and pets, but we’re on this adventure together. 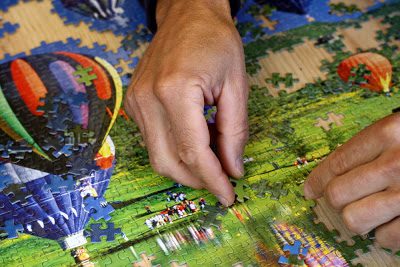 Heck, we’re doing puzzles together. Something is obviously different.