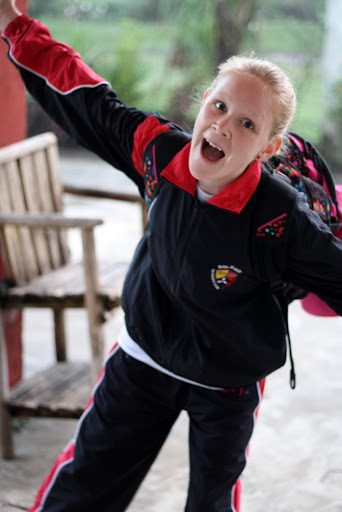 When we went to pick up the kids after their first day, my husband and I arrived a little early and got to watch the younger two exit their classrooms. They were smack in the middle of a mob chatting children. They stood out with their height and blond hair.

As we left the school, busloads of children went by. They hung out the windows, waving wildly and calling to our children by name.

We went into town and headed straight for an ice cream shop. While we ate our double-scoop waffle cones, the children regaled us with tales of their day. They all loved it, they announced, their faces aglow.

The next day (well, during the night), our younger daughter contracted a stomach bug so she had to stay home, and we took the others out early so we could catch the bus to Guatemala City. They missed the rest of the week of school, so today was the beginning of their first full week.

Since that first day, their enthusiasm has been tempered by the reality of:

*getting up at 5:45 every morning
*a rigid daily schedule
*their inability to understand anything

Actually, our older son still looks forward to each day, but the rest take turns saying they don’t want to go back. Last night our older daughter was in tears. Tonight, our younger son was crying.

Seeing them struggle isn’t much fun, but I feel surprisingly peaceful and confident about our decision to enroll them. I know my children will make friends, and I think they may even grow to love the place. But in the meantime, they rotate between feeling bored, frustrated, happy, scared, embarrassed, and anxious. They are being stretched more than they’ve every been stretched before. I am so proud of them. 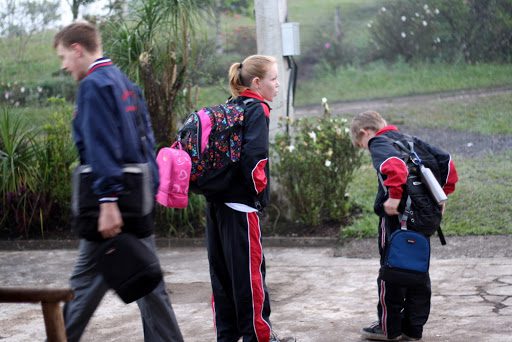 Two days a week they wear gym uniforms.
The rest of the time it’s skirts for the girls and dress pants for the boys.
I love uniforms. Love, love, love.

This morning my older daughter was anxious and drawn, her stomach in a knot. As we waited for their ride (the neighbors have offered to transport the kids every day in exchange for the cost of one tank of gas per month—they leave at 6:30 and get home at 2:15), my husband pranced around, poking and boxing at her in an effort to limber her up and get her mind off her fears. By the time the car arrived, she was breathing a little easier. 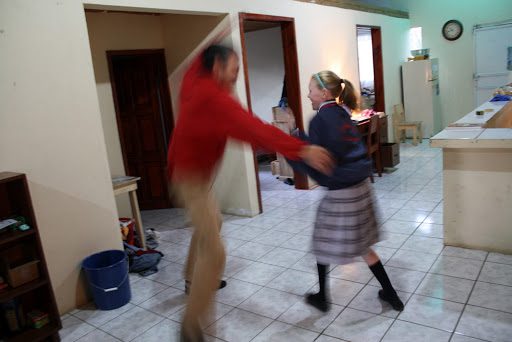 We keep telling the children that we are impressed by how hard they are working. We tell them that many adults would shrink from doing what they are doing. We point out all the new things they are learning and experiencing. We help them brainstorm ways they might deal with their anxieties. We feed them approximately five meals a day (oy). We keep the afternoons open for resting, lots of outside playing, chatting about their day, and reviewing their studies. By 7:30 at night, they are sacked out.

I expect this week will be rocky. I hope next week will be better, but I’m not counting on it. We’ll get there, though. It will get easier…eventually.