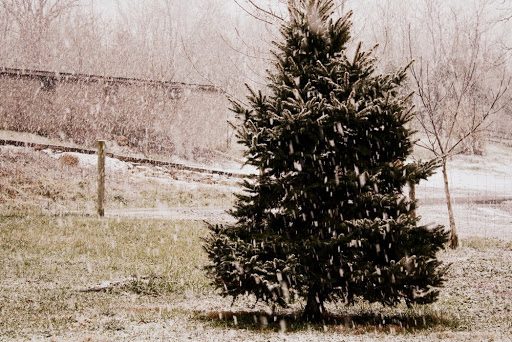 Before we get to the bread, several vignettes…

During our Christmas Eve service, I was focused intently on singing Angels We Have Heard on High when suddenly a little boy and his even littler sister started walking up to the front of the church. They were dressed up like Mary and Joseph, and their arms were extended in front of them like forklifts, their baby brother stretched across their arms.The big brother was responsible for the head; the big sister for the butt and legs.

Surprised, I half gasped-half laughed, and my eyes involuntarily welled with tears. And then, without even realizing I was doing it, I glanced behind them, looking for a wise man bearing a ham à la the Herdmans. And then, when I realized what I was doing, I really did laugh.

The mini Joseph and Mary tumbled their fat-cheeked, kicking brother into the wooden manger and stood guard over him, taking turns shoving his pacifier back in his mouth, while angels, shepherds, and a baby sheep (who was munching on a piece from her cotton ball-studded hat) gathered around them to stare into the manger.

That little scene may have been the highlight of my entire Christmas.

It snowed for Christmas!

Actually, it snowed the day before Christmas, but the white stuff lingered. There was enough snow on the ground for one Christmas morning sledding party before it melted away into nothingness. And then the next day we woke up to more snow, glory be! 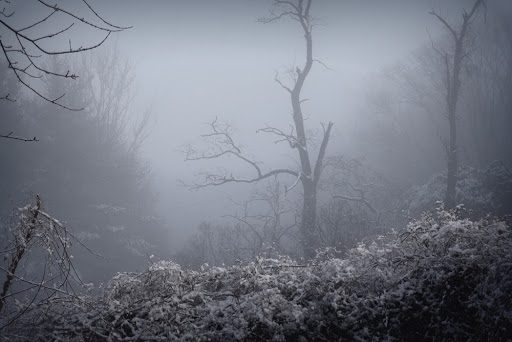 The kids realize that they won’t be seeing one flake of snow for quite a few months and so they’ve made it their personal responsibility to play in it as much as possible. 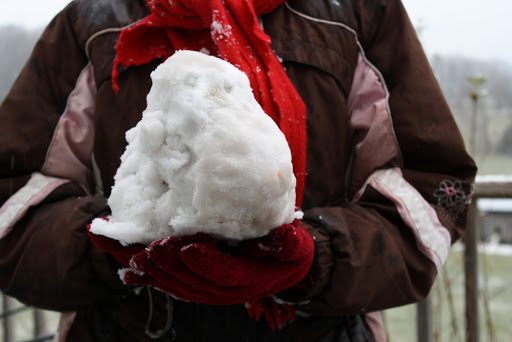 It’s a lot to wade through.

***
The Goodbyes Are Coming 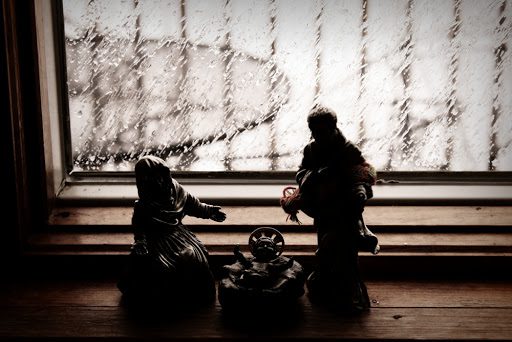 We’ve had a nice Christmas, but it hasn’t been easy. We are in the final days of packing. Our family is stressed and tired and anxious.

Up until now, I’ve been super excited. And I still am, lots of times. But now the excitement is tempered by a thick, choking sadness: the Goodbyes are coming. (If that sounds ominous, that’s because it feels ominous.)

Of course, I’m really, really, really glad I have people to say goodbye, too. I’m glad I’m sad to leave them because it means they matter, right? RIGHT! And we’ll get through the Goodbyes, and we’ll all be okay.

But still, being sad isn’t very much fun. 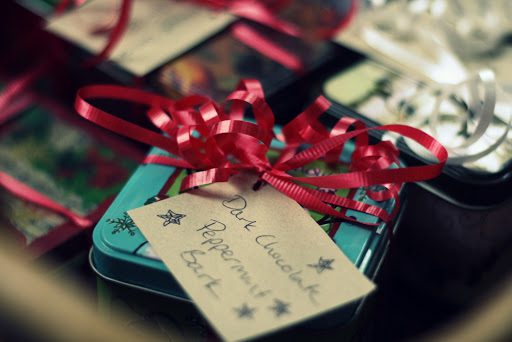 We delivered toffee and peppermint bark to the neighbors. It was snowing (yay), so my pretty little labels got spotchy. Oh well. 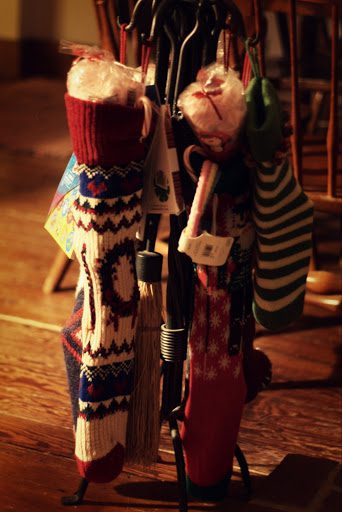 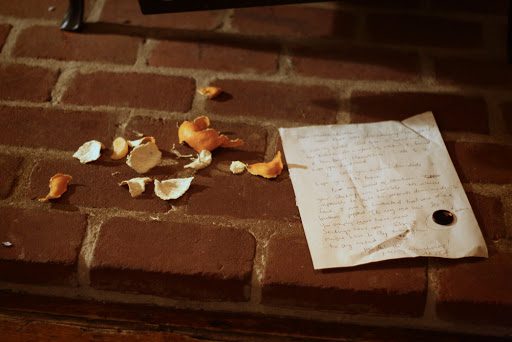 Nobody left any cookies out for him, so he ate had to raid the kitchen for some clementines. Also, he got so frustrated trying to cram the gifts into the poorly-made stockings (the insides of which are filled with loose yarn that snags on everything) that one of his buttons popped off his suit. 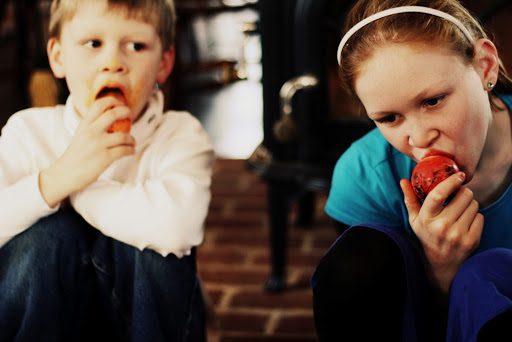 The kids ate enough sugar to last them for a very long time.
For Christmas dinner, my husband made his much-loved ham. 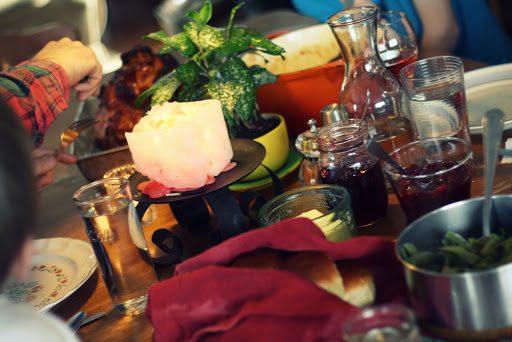 I made a pot of potatoes in cream. I hadn’t made them for a long time, and the kids went wild. In fact, they were so busy eating the potatoes that the ham got neglected. 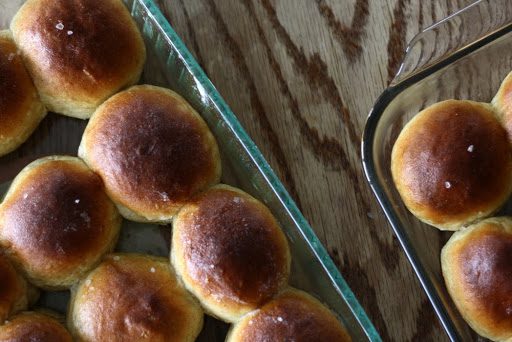 Also, I made hot buttered rolls. They may have been my favorite part of the meal.

In fact, these rolls don’t actually belong under the title of “not really into it” since I really was into them. (I was probably into them a little too much, groan.) 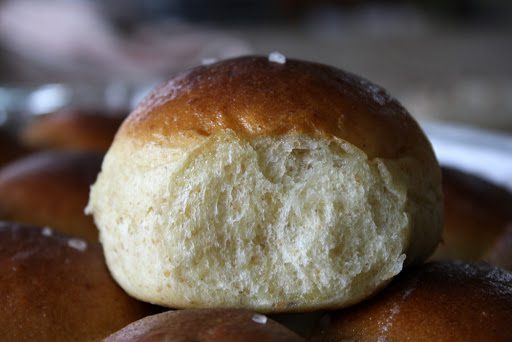 Today, we ate (fought over) the leftover rolls for lunch. We stuffed them with cold ham, grainy mustard, and cheese. 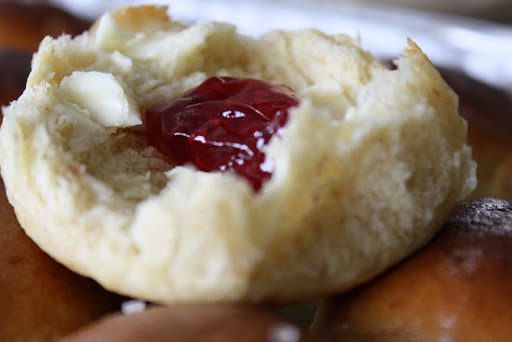 Hot Buttered Rolls
Adapted from the Mennonite Community Cookbook
½ cup warm water
1 tablespoon yeast
2 cups milk
6 tablespoons butter, divided
5 tablespoons sugar
2 1/4 teaspoons salt
1 egg, beaten
1 cup whole wheat flour
4-5 cups bread flour
crunchy salt, optional
In a small bowl, stir the yeast into the warm water and set aside.
Scald the milk. Add 4 tablespoons of butter and let sit until melted.
In a large bowl, stir together the sugar, whole wheat flour, yeast, and milk (taking care that it’s not so hot that it will kill the yeast). Let rest for 10 minutes.
Stir in the egg, salt, and remaining flour. Knead the dough till satiny smooth. Sprinkle the bottom of the still-dirty mixing bowl with flour and plop the dough into it. Sprinkle the top with flour, cover with a cloth, and let rise until doubled.
Divide the dough into 24 pieces and shape into rolls. Place the rolls in two buttered 9×13 pans. Cover with a cloth and let rise until nearly doubled. Bake the rolls at 400 degrees for 15-20 minutes.
Melt the remaining 2 tablespoons of butter and brush over the hot-from-the-oven rolls. Sprinkle with crunchy salt, if desired. Serve warm.
This same time, years previous: flat, marshmallows, the big snow, power paranoia, and turkey in a wash basket, bacon-jalapeno cheese ball