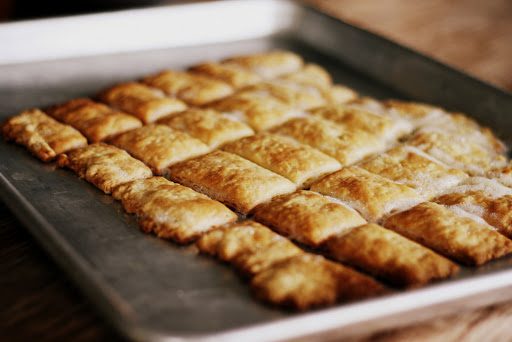 The other night I had all the fixings for quiche—a disk of pastry, browned sausage, frozen spinach—but I just wasn’t in the mood. There was a half-gallon of white beans in the fridge, too. Every time I looked at them, I felt guilty. I really needed to use them up.

A soup would be good, I thought, but white beans plus spinach would be sure to equal a dinnertime battle. I wasn’t in the mood for that, either. Maybe I could put the beans in the quiche? Meh…

“I know! I’ll make a quiche soup!” I yelled, but not out loud. (Is this why I get headaches? Because I’m yelling inside my head all the time?)

I’d turn the crust into crackers and the quiche filling into a brothy stew!
The crackers would sit atop the stew, all jazzy-artful!
It’d be quiche, deconstructed!
Yes! Yes! Yes!

And that’s just what I did. I rolled out the pastry, cut it into rectangles with a pizza cutter, and stabbed it all over with a fork. I made a thick, dairy-free soup. Table side, we drizzled in a little half-and-half and sprinkled on the parm. 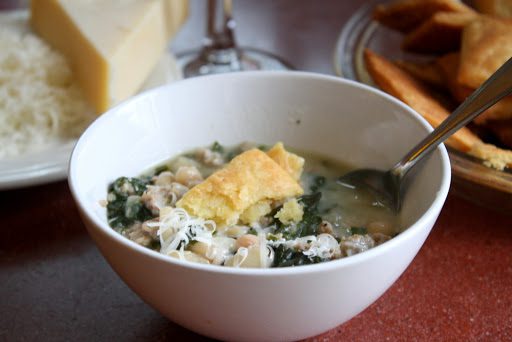 The meal was super yum, even my husband said so, and the pastry crackers were a huge hit—so melt-in-your-mouth rich, fragile with tenderness. 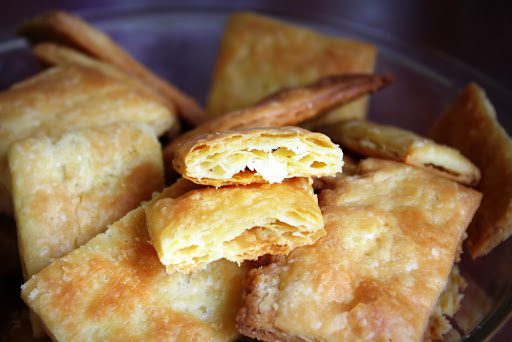 In the oven, they puffed up into flaky layers, kind of like a cheaters puff pastry.

The whole meal gave me a big thrill, it did. 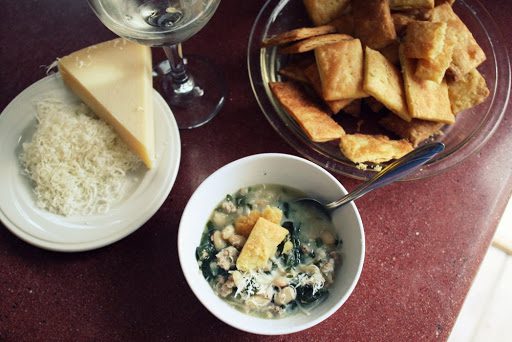 If I weren’t cooking for a lactose-intolerant eater, I’d add the half-and-half straight to the soup pot. Also, a bunch of cheese—the children would’ve probably liked that. However, the broth and beans and meat combined to make the soup plenty rich-tasting, I thought, even without cheese (or with only a bit as garnish). Either way, it’s good.

for the pastry crackers:
Roll the pastry out as you would for a pie crust (i.e. between two pieces of plastic wrap), but make it more in the shape of a rectangle than a circle. Lay it on a sided baking sheet (to catch the fat drips), cut it into little rectangles with a pizza cutter. Stab each cracker with the tines of a fork. Bake at 350 degrees until golden brown and puffy, about 15-20 minutes. Cool to room temperature before storing in an airtight container. Best used the same day they are made.

for the soup:
Saute the onions in the olive oil. When tender, add the sausage and spinach and heat through. Add the beans and broth. Bring to a simmer. Season with salt and pepper.

to serve:
Fill each bowl with the soup. Add a drizzle of half-and-half and a flurry of Parmesan. Set a couple crackers on top. Dig in! (A spoonful or two of white wine added along with the cream is very nice, too.)