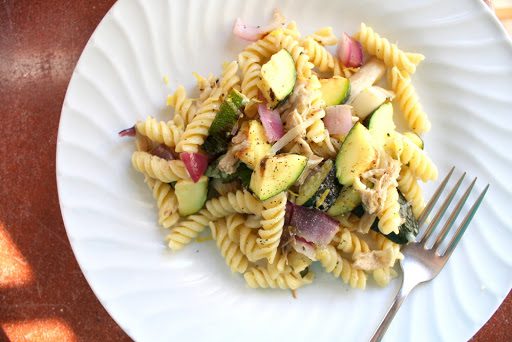 A number of different sources contributed to this meal.

The grilled zucchini wedges and lemon salt (brilliant) came from Ree. The grilled onion came from an NPR interview in which a chef said his favorite thing to grill was red onion. (I think I’m beginning to see why.) The bag of chopped cooked chicken came from the depths of my freezer—

Speaking of freezers, the other day I sent my older son to the basement to fetch some more empty quart jars.

“Mom!” he yelled from the foot of the basement stairs. “There’s a buzzing noise down here! It’s really, really loud! I’m not going in there!”

So I had to go investigate. It was the upright freezer alarm. The door had been left partially open (my husband accepts full responsibility). All the stuff in the door was thawed. The bags of corn and green beans and containers of pesto that were sitting along the edges of the shelves were softening. I rearranged things, shut the door tight, and in a couple hours the food was frozen up nice and hard again. It wasn’t too much of a tragedy, lucky us.

Also, speaking of freezers, both my freezers are filled to the gills. I can’t make bread or cakes or anything that might need to be frozen—there simply isn’t room. Locating the wheat germ or a jar of green peppers is like a 3D game of Tetris, but with frozen-stiff fingers and scraped knuckles. Every time I get out a box of strawberries, a jar of tea concentrate, or a chicken, I feel like celebrating. More space!

So that’s the freezer status. 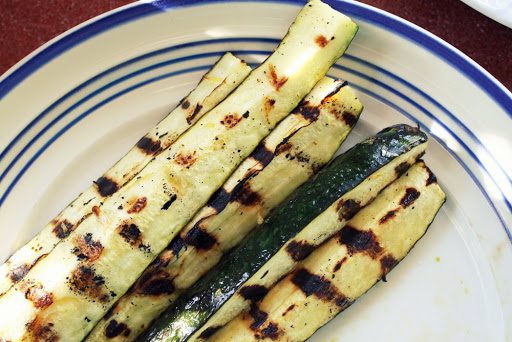 Back to the meal. You can play around with the ingredients here—grilled red pepper! crunchy green beans! tuna!—but the lemon-salt is key. It kicked the flavors over the top. 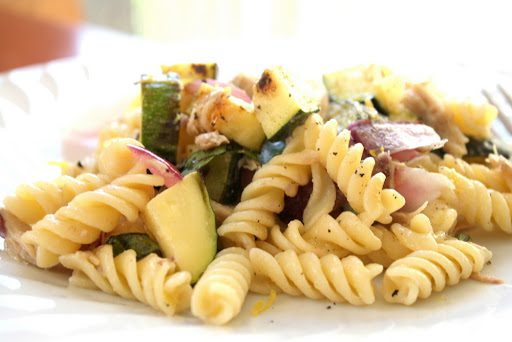 Put the zucchinis and red onion slices in a pan and toss with a glug of olive oil, the zest from one lemon, the juice of half the lemon, and some salt and black pepper.

Grill the onion and zucchinis on a medium-high grill. Turn the zucchini wedges every couple minutes (or so) so that all three sides get grill marks. Grill the red onion slices, turning once. Remove veggies from heat and chop roughly.

Zest the second lemon and add ½ teaspoon of salt (give or take). Chop the lemon with the salt. Now you have lemon salt! Sprinkle over the veggies.

Cook the pasta according to package instructions. Drain and put in a serving bowl. Add the grilled veggies (making sure to scrape in every last speckle of lemon salt), the chicken pieces, cheeses, and basil. Drizzle with olive oil and the juice from the remaining half lemon. Toss to combine.