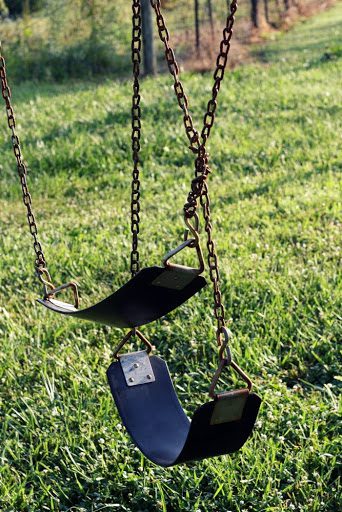 We’re skipping church this morning in favor of a) my husband and the kids cleaning up the yard and doing garden work before the heat peaks, and b) writing time at Panera for me. Our power came back on last night, but the internet is still out, and considering that the tower it at the top of a mountain, I have a hunch it will be out for quite some time yet. So I just spend forty-five minutes answering and organizing emails, skimming Facebook, and now, writing. The air conditioning, strumming guitar music, and caffeine buzz are a pretty nice combo.

Since I was last here in bloggyland, I flew to NYC, did All Kinds of Stuff, and then escorted a busload of 35 city kids back home (to the area, not to my house). But I’m going to skip over that (I’ll tell you about it eventually…probably) and cut straight to the latest story: the storm.

Friday night, my husband and I were innocently making the rounds between the kids’ rooms, tucking them in to bed, when the storm hit. I was saying good-night to my son when I noticed that the wind was picking up. I knew a thunderstorm was coming, so I went out into the hallway to shut the window at the top of the stairs. Right as I reached the window, the wind smacked into the house with such force that the window screen buckled, the bedroom doors slammed (some of the door stops were knocked clean off), and the maple tree (the one right outside the hallway window) snapped.

I screamed at my husband (I have no idea what I said) and took off down the stairs. When I paused at the bottom to gather my bearings and to make sure the rest of the family was coming, Nickel zipped right by me. I caught him around the waist and held on tight while he screamed and struggled, frantic to be going somewhere, though I had no idea where. I yelled at the other kids to get to the basement, scooped up the shaking boy with one arm, and ran for the door.

Later I asked Nickel where he was going. “To the basement,” he said.

“Did someone tell you to go there?”

“Then how did you know to go there?”

“Because that’s where you go when it’s windy!”

My husband had a harder time getting our older son out of bed. He was nearly frozen with terror and my husband had to yell at him a couple times to get him to move. Later, our son told us that the attic hole board (that’s in the ceiling of his room) had lifted up and blown away and some cloth (or something) shot down through the hole, a la a hand or something equally nightmarish. No wonder he was paralyzed! 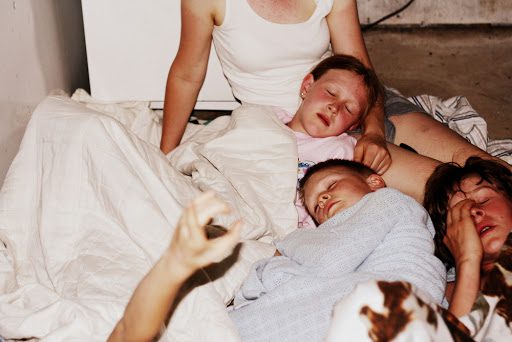 The first 30-40 minutes in the basement were traumatic. Even in the cellar, we could hear the trees thrashing and doors banging. We had no idea what was going on. Was there a tornado? I had checked the weather a couple hours before—they were calling for some severe thunder storms but there was no mention of anything out of the ordinary.

The kids were shaking and crying, clinging to each other, hunkered down on the dirty concrete floor. Sweetsie was so terrified she got sick to her stomach and threw up. I said all sorts of things to calm them down:

We’ll be just fine.
Your spit rag is fine.
You may NOT keep crying. You have to calm down and be quiet.
If your clothes get ruined, we’ll buy more.
The dog and cat are perfectly fine. The chickens are FINE.
It’s just some bad wind. It is not a tornado.
This won’t last forever. It will soon be over.
We will be fine.
We’re safe here.

I wasn’t lying exactly, but my confidence was not based on reality. Unless hope is a reality?

“Pray, Mama, please pray,” they begged. And so, even though I don’t believe in that sort of way, I did, in little fits and starts. And when my husband and son went upstairs to get blankets (and the laptop, camera, and spit rag) and shut the windows against the rain that had started, I sang to them, too—”Jesus Loves Me” is what popped out.

We made a nest on the floor with all the blankets. Note: you know your kids are scared when they can lay practically on top of each other for an hour and a half without fighting.

To lessen their fear, I tried some humor. “Hey guys! Did you notice what I saved when the storm hit?”

“No, silly! YOU! You kids are always saying I love my computer more than you, so I’d like you to notice that the only thing I thought of when the storm hit was you. I just wanted to clear that up, you know, for the record.”

Also, I thanked them for the lovely family time we were having.

I don’t think they fully appreciated my little jabs at humor, but oh well. Joking around made me feel better.

Actually, I wasn’t all that scared, really—perhaps because I’m generally pretty clueless? My husband, on the other hand, was much more freaked out than I was  (though he didn’t let on in front of the kids). 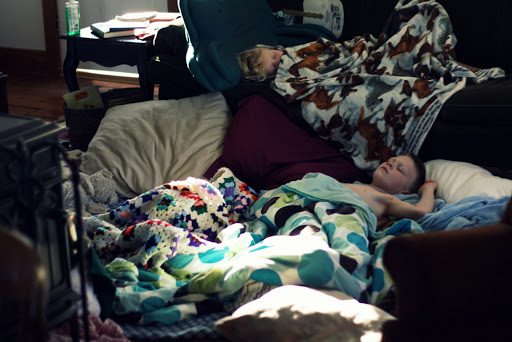 When it came time to go back upstairs, we had to order the kids to come with us. They refused to go back up to their beds, however (I didn’t blame them), so we threw blankets all over the place and told them to pick a spot. 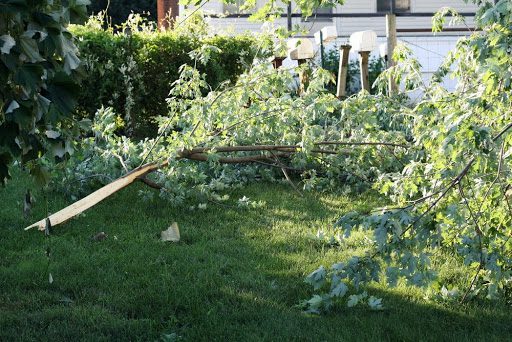 The next day was spent getting water from a spring, doing bits of clean-up, and cooking on the outdoor cookstove. We got the generator from the my parents’ property, and, with my brother’s family, took turns using it to keep the freezers cold. Which was a HUGE stress reliever, thank you Mom and Dad (and I’m so sorry that you had to get towed when your car broke down while you were driving home to WV in the storm and that you didn’t get home till one in the morning, and that when you did, you didn’t have electricity, but yeah, anyway, thanks for the generator). Towards evening we even hooked the generator up to the well so we could get showers, and we took water to some neighbors (and then kicked ourselves for not thinking of them sooner). 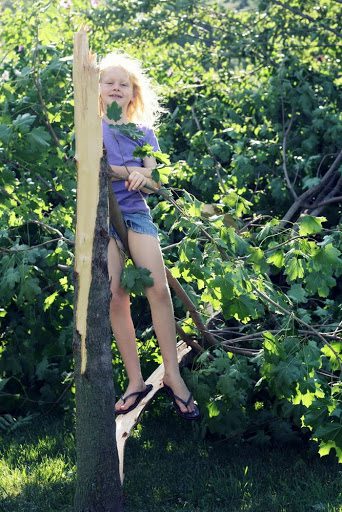 Last night at bedtime, the kids were still too scared to sleep alone so we piled into two bedrooms, never mind the thick, sultry, oppressively still air. (My daughter had cleaned up the basement and carried a pile of blankets down there, just in case.) And then the kids feel asleep and the power came on, yay. 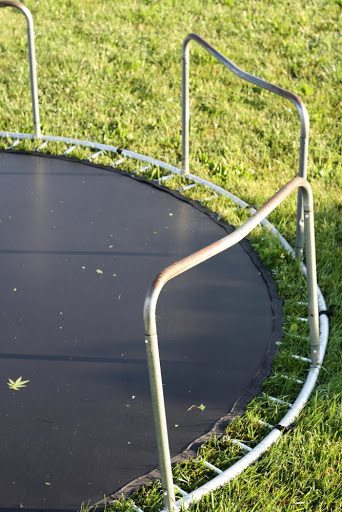 Now that the power is back on and life is normalizing (though we’re still without a phone), I’m hoping the trauma soon fades. However, ordinary breezes feel slightly malicious (to all of us, I think), and one daughter believes it’s the hot weather that brings on the storms. In that case, we may be in for a couple more communal sleeping experiences as the heat wave isn’t going to break for another few days at least.

So tell me, how did the storm treat you?

P.S. Update: the power went back out again this morning, my husband reported when we met up at the church potluck. I’m still in town (though my latest coffee shop doesn’t have internet access)—it’s tempting to just stay here in Air-Conditioned Coffee Land forever.

P.P.S. The power is back on. The phone works. Still no internet.