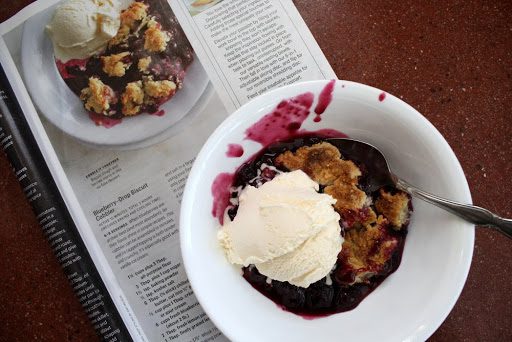 We had a fantastic supper the other night.

At least I thought it was fantastic. I had almost as much fun making it as I did eating it. Maybe more.

It was four curses long:

1. Sliced radishes with butter to spread on top and coarse salt to sprinkle them with. And tomato slices with dollops of cucumber mint salad on top (mayo, capers, mustard, red onion, vinegar, mint, cucumbers, S&P).

2. Grilled zucchinis that were then relaxed in a lemon-olive oil-basil dressing.

I did not plan this menu. I started thinking about supper a little before 4 pm, and it came together as I went along. 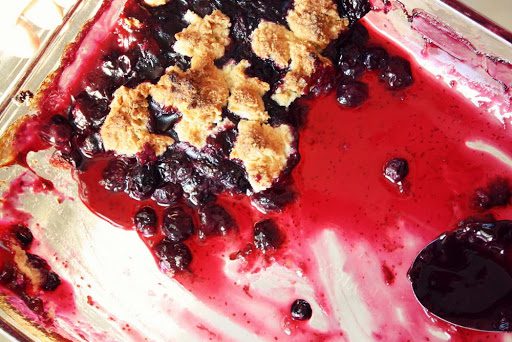 This cobbler is just a butter-and-sour cream rich biscuit dough that gets torn over a panfull of sugared, lemon-spiked blueberries. We feasted till we about popped.

And then my parents stopped by and I dished some cobbler into little ramekins for them. 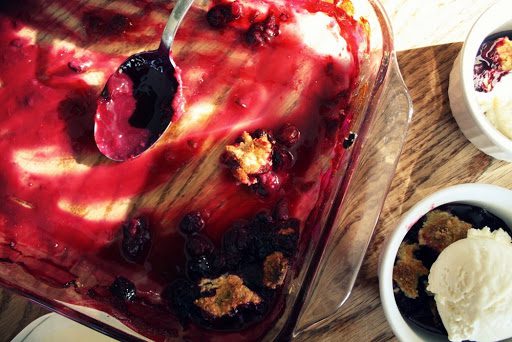 My mother approved of the topping. She liked that it was so crunchy.

By the end of the evening, this was all that was left. 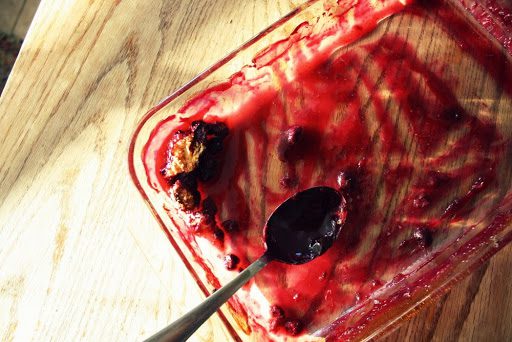 I put it into a little ramekin and ate it the next day, hunched over the counter, my back to the children.

And it was wonderful. 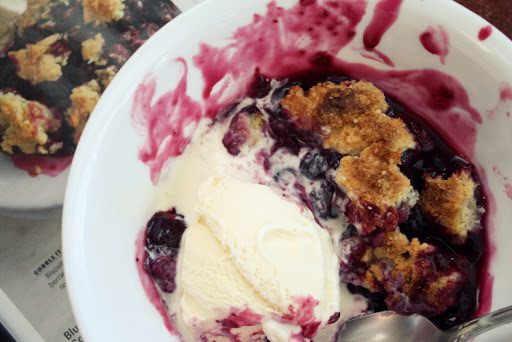 Next time, for more texture and flavor, I may swap out some of the flour for some oats or the multigrain mix.

In a large bowl, toss together the blueberries with the one cup of sugar, the three tablespoons of flour, and the lemon zest and juice. Tumble it all into a 9×13 baking dish.

In another large bowl, combine the remaining flour, baking powder, 3 tablespoons sugar, and salt. Using your fingers, cut in the butter. Stir in the sour cream. Knead very briefly, just till it comes together. Tear the biscuit dough into bits and scatter it over the berries.

Bake at 375 degrees for 40 minutes or until golden brown and bubbling merrily.

In case you are under the impression that all my meals are seasoned, balanced, and finished off with a noteworthy dessert, allow me to set the record straight:

1. I can’t cook hamburgers. The other night I tried, once again, to make a good burger, but I made the patties too thick (about an inch instead of a half inch) (my carpenter husband was appalled that his wife could be so measurementally challenged) and they were raw on the inside. We threw them back on the grill (all except for my youngest son’s burger—apparently he likes to hear his supper moo), and they turned out yummy, but by then it was far too late for any possible cooking goddess glory.

Also, I bought American cheese (oh yes, I did) to top the burgers and made McDonald’s special sauce to go on them. And we had Pringles and mushy watermelon.

2. And then another night we ate eggs and toast and everyone was still hungry when we finished.