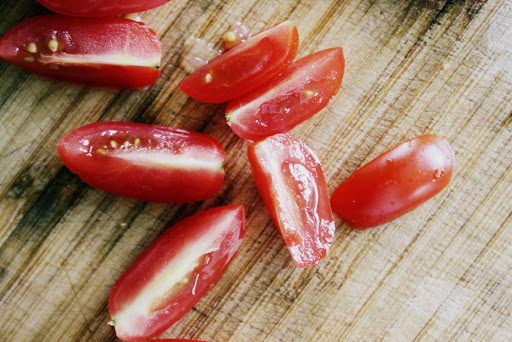 Re the play: under no circumstances whatsoever are we to eat food while wearing our costumes. If we do, we run the risk of the (normally bubbly and happy-go-lucky) costume designer suffering an apoplectic fit.

Even so, there is often food in the green room anyway: bagels, cake, bread and jam, pie, crackers, and the like. We eat while walking around in various stages of undress or after the play is over. I usually don’t eat anything, partly because of nerves, partly because I don’t need to, and partly because the corset doesn’t allow for breathing, let alone food.

However, four and a half hours is a long time for the little kids to go without eating, so their mother often packs them something more substantial. They put on full-body bibs (the plastic smocks that we wear while we’re getting our hair done) and dig in. One night I spied them huddling over a big container of cucumber and tomato salad.

“What’s in that?” I asked, bending over to get a closer look.

The mother rattled off the list: tomatoes, cucumbers, chickpeas, feta, and black olives.

“A garlic clove mashed up with some salt and olive oil.”

“Vinegar, too?” I suggested.

“No, lemon juice. I always use lemon juice for the acid when making Greek food.” 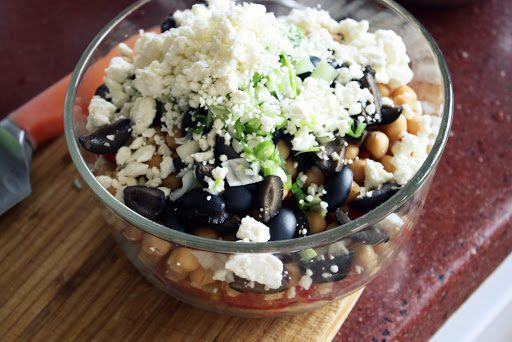 I love it when people have particular food prep habits. It’s indicative of style, flair, an informed opinion. I never knew that lemon juice was preferred over vinegars when making Greek food (I am flair-less!), but I’m all for learning. 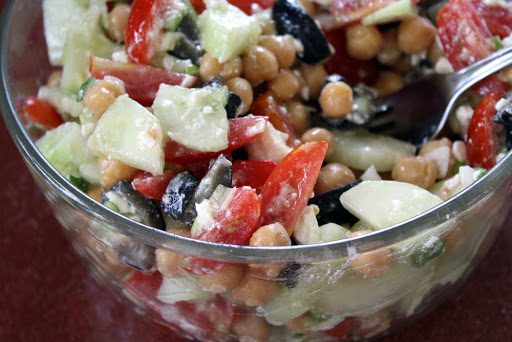 I made the salad this morning, mashing up a bit of garlic with some salt in my mortar and pestle, just like she recommended. I never use my mortar and pestle, but that’s all changed now. It transformed that clove into a pungent, salty paste. A couple glugs of olive oil and the juice of half a lemon later, and I had a smooth, authentic (yes? yes!) Greek dressing.

The salad was as good as I imagined it to be. Maybe even better. Come August, when tomatoes and cucumbers are at their peak, this salad will make a frequent appearance at our table. 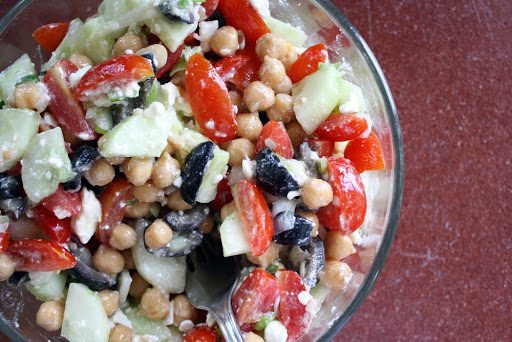 Greek Cucumber and Tomato Salad
Inspired by my friend MAC

In a large bowl, combine the first 6 ingredients.

Mash the garlic with the salt until creamy. Whisk in the olive oil and lemon juice.

Pour the dressing over the vegetables and toss to coat. Taste to correct seasonings.

P.S. My younger daughter was washing the dishes and came upon the mortar and pestle. “Can I have this when you die?” she asked.

I didn’t answer right off—there were so many things wrong with this statement. First, she’s planning my death already? Second, a mortar and
pestle is the best she could come up with? Seriously?