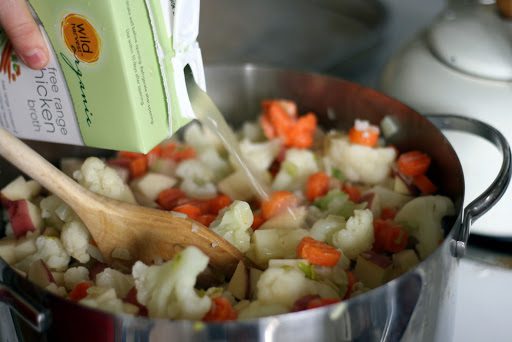 Our internet went out this weekend. There was a lot of rain and a little lightening, and boom, the towers that connect me to you went down.

It wasn’t too bad, actually. We still had electricity, and that’s what really counts. Besides, the message on our internet company’s answering machine said I would be able to resume my addictive habits by Monday afternoon at the latest. That took the sting out of the loss. With an appointed end time to my forced internet abstinence, I was no longer in purgatory.

Still, I took my laptop to church on Sunday, and after the service I sat out in the parking lot to see if there was any accessible wireless waves floating around in the air. There weren’t. On our way out of town, I kept the laptop on my knees so I could see my options. When a new server popped up with the name “getyourowndamnwifi,” I laughed till my eyes watered.

We ended up pulling into a bagel shop parking lot just long enough for me to check mail. I felt subversive, huddled in the front seat of our van full of hungry kids, the windshield wipers flapping back and forth in the pouring rain. Ten minutes of internet were all I needed, and it was all I got.

It was rainy again yesterday (there was even some snow!), so I made soup for supper. One of Ree’s latest recipes was floating around in my subconscious, and I had a bag of red potatoes on the counter and a freezer full of frozen cauliflower (and no great ideas about how to get my kids to love it), so a giant pot of potato cauliflower soup felt positively providential. Plus, the internet was back up so I was able to actually find the recipe so I could cook it.

Ree’s recipe looked ridiculously rich (no surprise there). I figured I’d tweak it as I went along. But you know what? Even though I changed the proportions, added potatoes, and fiddled with the method, I didn’t cut back on the half-and-half, butter, or sour cream at all. The soup needed that richness—who wants a watery cauliflower soup?—and the sour cream gave the soup a marvelous punchy kick. 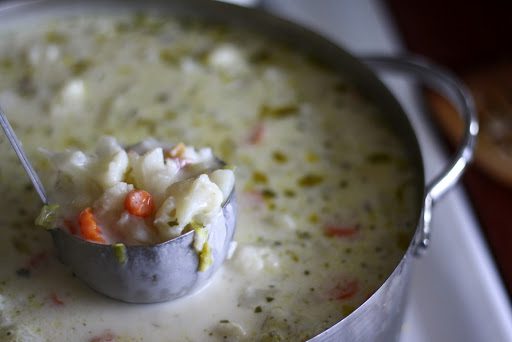 The soup was a bit brothy. Next time, I’ll cut back on the liquid and/or increase the vegetables. I wrote out the recipe to take into account those changes.

Melt 4 tablespoons of butter in a large stockpot and add the celery and onions. Saute until tender—about 10 minutes. Reduce the heat to medium low, add the carrots, cauliflower, and potatoes, and cook, covered, for about 15 minutes.

While the vegetables are cooking, make the white sauce. Melt the remaining 4 tablespoons of butter in another pan and whisk in the flour. Whisk in the milk and bring to a gentle boil, stirring steadily. Off heat, whisk in the half-and-half. Set aside.

Measure the sour cream into a mixing bowl. Add a scoop of hot soup and whisk to combine. Add several more scoops and stir until smooth. Pour the sour cream-rich soup back into the pot. Taste to correct seasonings.

This same time, years previous: me and you, and the radishes (but it’s actually on blogging, and I still agree 100 percent with what I said back then—in other words, I still struggle)