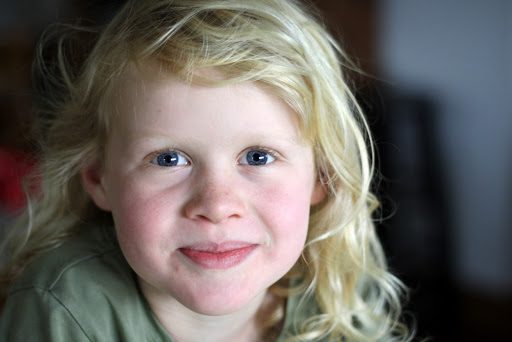 This chica finally got to turn two. She was happy about it.

My husband and I threw a wrench into our normal birthday festivities by planning a non-birthday-related surprise for the kids that evening. This meant that we had the big birthday supper at lunchtime and the birthday lunch at suppertime. As if turning two on your eighth birthday wasn’t already confusing enough. 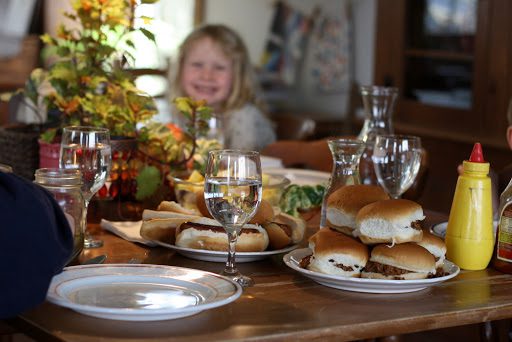 The birthday girl requested meat, meat, and more meat. (Did my husband set her up?) There were sloppy joes and hotdogs and bologna sandwiches and salad with ham. The kids ate like they haven’t seen meat in a number of days.

My husband took a second hotdog and said, “What! Why are you looking at me like that?”

“Why, honey,” I crooned. “I’m not looking at you like anything.” 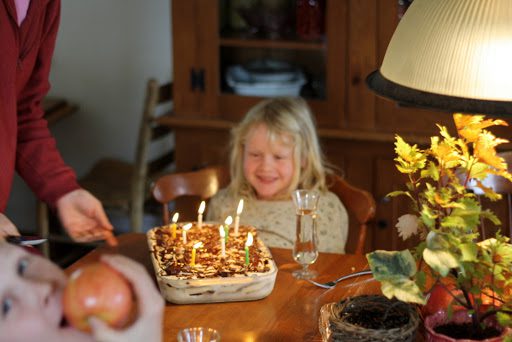 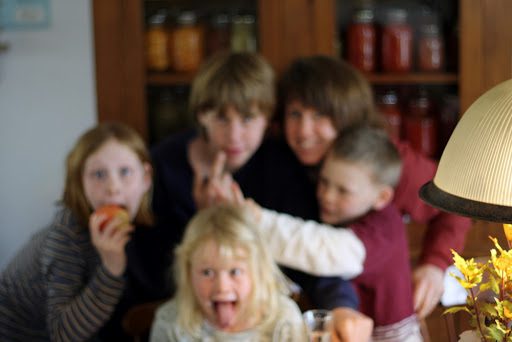 Please excuse the blur. My husband decided he’d rather focus on the lamp instead of us.

For posterity’s sake, I ordered the kids to put their heads together while we waited for Papa to haul the presents downstairs. It just so happened they lined up according to age.

My older daughter gave her a small plastic horse someone left at a playground, and she and my son packaged it up a la those nesting dolls. (She’s holding the box in the above picture.) It took her a good number of minutes to wade through all the paper and ribbon and taped-up boxes. They had even placed one of our old, bunged up radios in one of the boxes to make the package heavier.
The girl wanted a “glass doll.” My mom, the thrift store queen, found one, cleaned it up, and mailed it to us. We paid for it, but we made it clear that Grandmommy scored it. 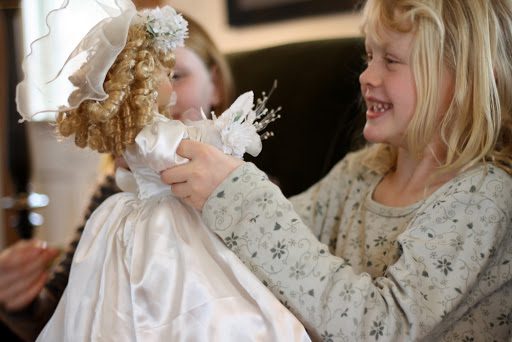 My daughter was thrilled. 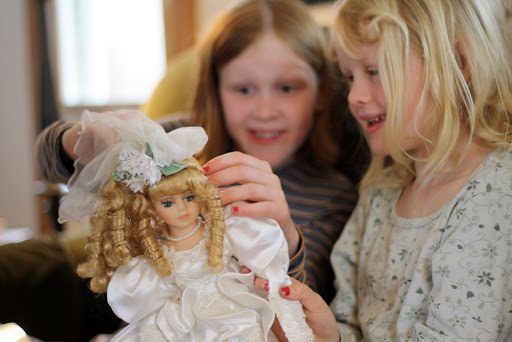 It’s a fact that new mothers always have to examine their babies’ toes. Even if they’re just lumps of glass. 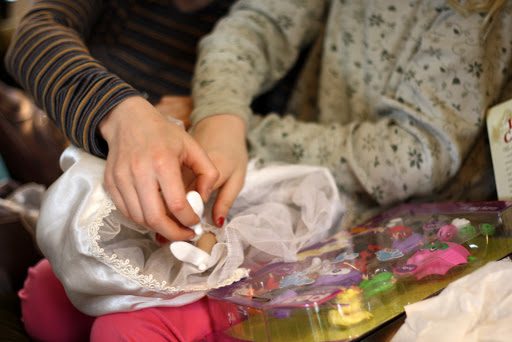 Birthday over, we moved on to Leap Year Day Partying, Phase Two: packing supper (I mean, lunch), getting kids dressed in “town” clothes, loading up the car with blankets, pillows, and water bottles. A couple errands in town, a stop for coffee, and we were on our way. 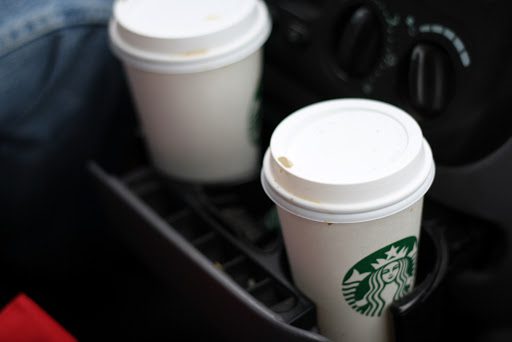 There was only one emergency pee stop. Yay, us. 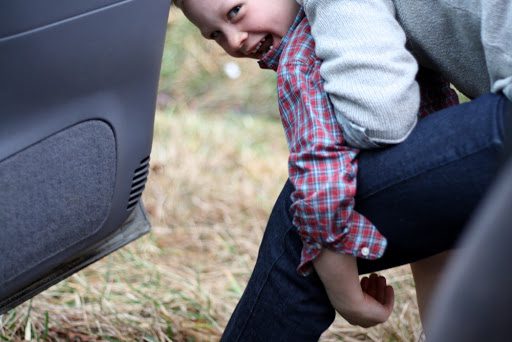 I had packed a bag of clues which I revealed every half hour or so. They were, in order:

Clue #1: a roll of masking tape atop Papa’s head.
Clue #2: a book of piano music.
Clue #3: a newspaper clipping of an ad for a roofing business with the word “Broadway” highlighted in yellow.
Clue #4: a stuffed lion.

They were still confused when we got to the end, so I put the masking tape on top of the lion’s head. “Lion King!” they yelled, though they were still bewildered because they didn’t know what a Broadway musical was. 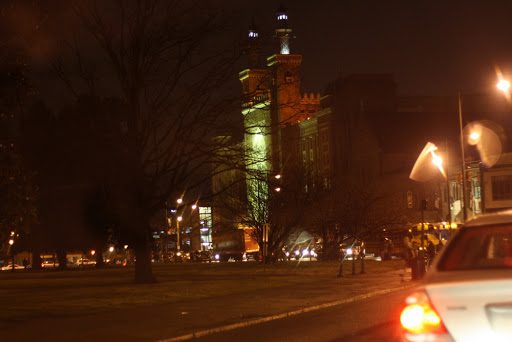 So as we approached Richmond’s Landmark theater, I explained it to them. Some of them had the benefit of seeing this clip (which I showed them before I realized we’d be going), so they had a slightly better understanding. 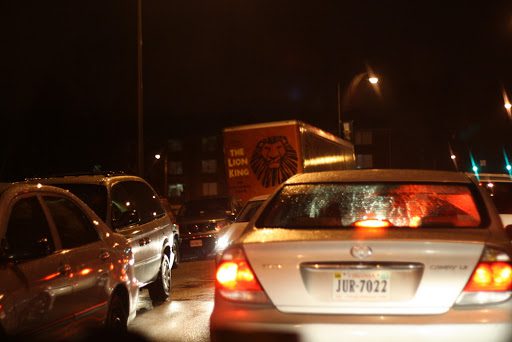 We entered the theater through a side door and an elderly woman attendant took us up the three stories in an old elevator with a sign forbidding more than 5 people to ride it. We exited the elevator and promptly got lost, walking down long, dark corridors lined with closed doors. Which would not have been so awful if I hadn’t needed to pee. But I did, and a full bladder made the situation feel much more desperate than it really was. After several turns, we came to a dead end and had to backtrack, randomly tugging at doors to see if any of them opened up into the balcony. I felt like we had stepped straight into the mansion from The Lion, the Witch, and the Wardrobe.

Finally, we found the balcony and then our seats. We were perched almost at the very top. It felt dangerous.

The show was impressive and incredible and beautiful. The singing was amazing (Rafiki was my favorite). Except we really couldn’t see that much since we were so high up, and sometimes it was hard to understand what they were saying. So at intermission, I moved us over to the side, right by the balcony railing. We enjoyed the show much more from our new look-out spot. We could almost see the actors’ expressions. 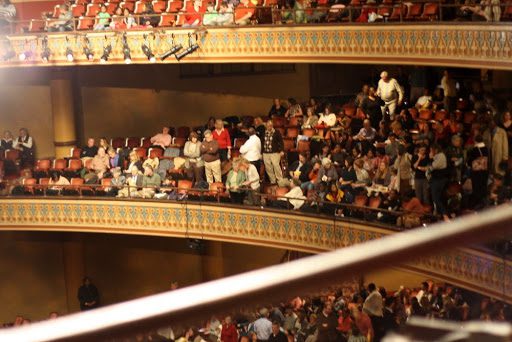 Two and a half hours later and we were running through the pouring rain back to the parking garage. I divided out the cheese curls and bananas and grapes (the birthday girl’s request) and we headed home.

After a costly (time and/or money) investment, I always find myself pondering the big was-it-worth-it question. This time around, the answer was yes. Yes, because it was a good family experience and the kids enjoyed the show.

But I also learned that I’m not particularly fond of the actual Lion King story. I couldn’t help wondering if the actors ever felt like they were boring themselves silly, which is kind of a bad thing to wonder in the middle of a fabulous production—it does not bode well. Also, the dialogue was sparse and cliche. I longed for thoughtful and meaningful exchanges. And the biggest thing I (re-)learned is that I really am a front row sort of gal. The details are where it’s at.

I was pleasantly surprised to find myself thinking fondly about our Blackfriar’s theater. It’s kind of funny, I know: I drove all the way to Richmond to see a Broadway show and learned I prefer (at least in this situation) my dear Blackfriar’s. How sweet is that?

But I’m still saving up money to see a Broadway show when I go to NYC this summer. I’ll pay extra to sit up front.