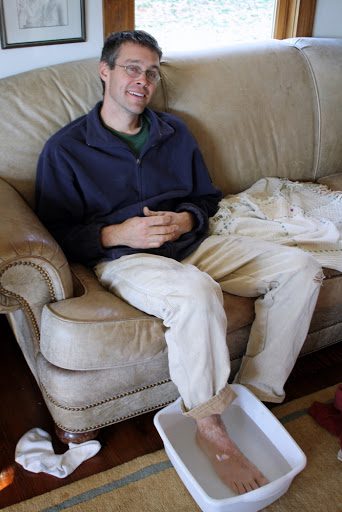 Several months ago, I was invited to sit in a teensy-tiny padded cubicle and talk into a plate-sized microphone that was smashed up against my face. It was thrilling—so thrilling, in fact, that I kept waving my arms around and smacking my thighs every time I made a point. Finally, the tech dude stuck his head inside and said, “What is that noise?” So I sat on my hands, but they still kept escaping and slapping.

If you want to hear what I said, go here. (You get bonus points if you hear me smacking myself.) They worked hard to make me sound coherent (cutting back my 30+ pages [!] of transcript to a mere two or three) and for that I am indebted. (For all the info, go here.)

Monday morning, I spoke into another (smaller) fancy mic, but I’ll tell you about it in a few days when it airs.

I never did tell you what I thought about Forks Over Knives.

Confession: I waited to publish the post until after seeing the movie. I was afraid I might have to eat crow, and while crow is a staple of my diet, I’d rather not eat it in front of the whole wide world. (It’s rude to eat in front of people.) (Hold on a sec! Does this mean that I wouldn’t have to eat any more crow if I became vegan?!) I made a few tweaks after I watched the movie, but they weren’t substantive.

*Eating plants is awesome for me and I should do it more often. Hallelujah and pass the kale.

*The movie’s vegan rah-rah bandwagon didn’t hold much water for me, mostly because they skated over inconvenient information, such as: a)  not every one who eats meat and dairy pigs out on it, b) there are lots of very healthy cultures in which the people eat dairy and meat, and c) the incredible health benefits of fish.

*The message to eat more vegetables is an excellent one, but it would’ve been strengthened considerably if they had limited their variables. When you take sick people, people who are gorging on fast food and eating whatever they want, and cut out all sugar, fat, and animal products, push them exercise, and pump them full of collards, there are going to be huge and fabulous benefits. And that’s wonderful! But there’s too much going on in those situations to draw a clean conclusion.

An aside: One of our foster daughters was obese. Shortly after she came to us, I had to take her to see a nutritionist. Her blood sugar numbers (or whatever they’re called) were through the roof. Six weeks later (or whenever it was), when I took her back for a follow-up, she had lost ten pounds and her sugar numbers had dropped drastically (so did the nutritionist’s jaw). This could be because she went from drinking only soda to drinking only water or because we were in the middle of salad season or because she wasn’t lounging around in front of a TV or because she was more emotionally stable and secure or because we were going for walks together, etc. My point is, there were a lot of changes happening simultaneously. End of aside.

I don’t jump on bandwagons but my husband does. Or at least, he likes to try. Usually, he gets his feet stuck in the wheel spokes and falls on his face.

When we started watching Forks Over Knives, I turned to him and said, “You’re totally going to buy this movie, you know.”

And I was right. He said things like, “So why don’t we try eating a plant based diet? Maybe it would make a big difference. What do you think? Huh? Huh? Huh?”

When I didn’t bite, he started hitting lower. “I bet you couldn’t do it! You couldn’t give up all that butter! You cook with all that dairy and that’s why my stomach hurts all the time. Plus, our grocery bill would be much lower if you didn’t buy so much butter.”

So not only do I have no will-power, but I’m also hurting my beloved with my cooking and destroying the family financial situation. All because of some butter. Wow.

It drives me nuts when he starts acting all better-than-thou, as though it’s me shoveling the pizza and buttered toast and ice cream down his throat. But I haven’t been married to him for fifteen years for nothing. I know how to play his game, oh boy, do I ever.

The next morning, he made a big show of eating his yummy oatmeal with berries, two big bowlfuls. He determinedly ate the lemony lentil soup, the brown rice, the spinach, the black beans, the chickpea peanut butter soup. He even ate his Sunday evening popcorn minus the butter. For that he wore his very best brave face, but, just a secret between you and me, it was a very miserable brave face.

This morning, I noticed he chose granola over the leftover oatmeal in the fridge. I don’t think he’ll last much longer.

Darn. Cooked oatmeal is so easy.

“Ouch. I think I just shot myself in the foot. Again.”