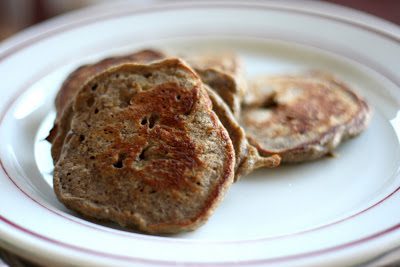 Last night when I went grocery shopping, I didn’t buy the cereal. I was supposed to pick up a couple boxes, along with the ladyfinger popcorn, onions, and sour cream, but then my published words came back to haunt me. I had made some disparaging comments about bought cereal, referring to it as “fluff-o-nothing,” and then I said “…boxed cereals are expensive, not to mention a waste of calories, so I’ve taken to buying oats in 50-pound sacks and mixing up my own version of breakfast.”

So there was pretty much no way I could put a box of Cheerios in my cart. If someone saw me, imagine! In a matter of seconds, maybe minutes, the whole world would know I was an imposter, a fake, a hypocrite. My writing career would be over before it even started.

Such were the irrational thoughts of Yours Truly. I knew I was acting a little hyper-sensitive, a little crazy—like anyone cares, you goose!—and I laughed at myself (though not out loud). I did not, however, touch a single box of fluff.

So we had pancakes for breakfast this morning.

Actually, I had already mixed up the batter that afternoon in anticipation of six hungry munchkins at my table (two extra kids were staying over), so that particular cereal turmoil was irrelevant to this particular meal. 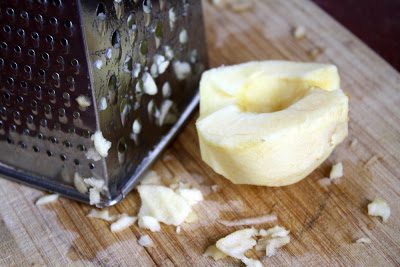 I’d already made these pancakes a couple weeks before, and in spite of them being one hundred percent whole grain, half of that being the rather strong-tasting buckwheat, the kids ate them right up. They didn’t pig out, mind you, but they made favorable noises and liked them well enough for me to add them to our pancake repertoire—a repertoire which is getting rather lengthy, me thinks. 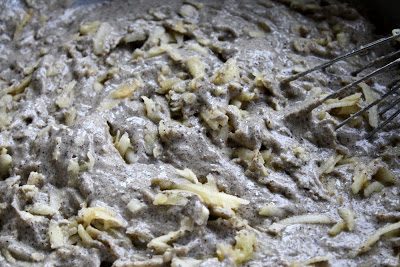 Pancakes are happy food. They make the world go round, or at least our day get started. Eat up! 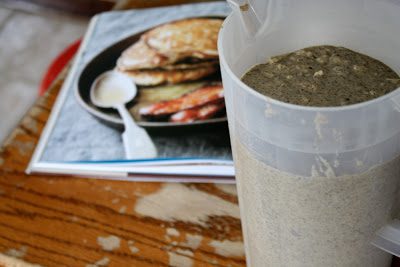 Back to these buckwheat pancakes. I got the recipe from my new cookbook, Good to the Grain by Kim Boyce—

Stop it right there. I gotta tell you about this book. I had been lusting after it for months and months and months. All the other food bloggers were chortling its praises and I felt all woeful since I wasn’t in the know. But then my mother gave me some hot diggity dog birthday cash (thanks, Mom!). 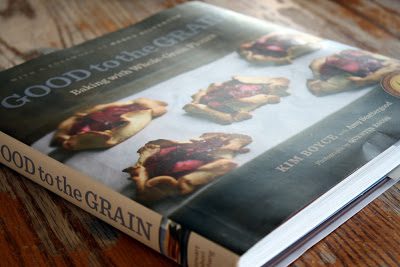 Already, the book looks like it’s been through a minor war, what with the sticky notes poking out around the edges, the smudged and wrinkled pages, and the kid scribbles.

Kim breaks the recipes into sections according to flours, so after a quick read-through, I honed in on the recipes that called for the flours I already had, and just today I mixed up my own multigrain flour (whole wheat, barley, rye, millet, and oat flour). 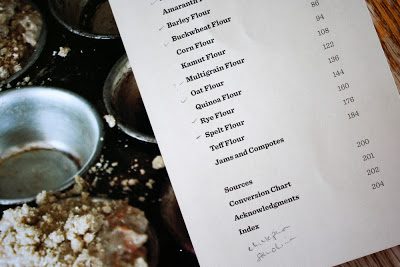 I’m sampling recipes on a regular basis, trying to get a better grasp of baking with whole grains. I find I want more information than what Kim provides, but that doesn’t bother me too much. I’m learning lots—I can always go deeper later.

Oh, and one final—and perhaps the most important—thing: Kim is focused on creating recipes that taste good. She’s not into that cut-out-the-butter and reduce-the-sugar crap. She’s a pastry chef, for crying out loud! These recipes are all about flavor, about exploring the grains for their own unique tastes (and ooo, lookie! They’re good for you, too!), and that, my friends, is a bandwagon I will happily hop on. 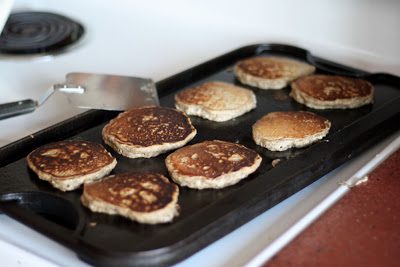 Anyway, that’s how I came upon this buckwheat pannycake recipe. The end. 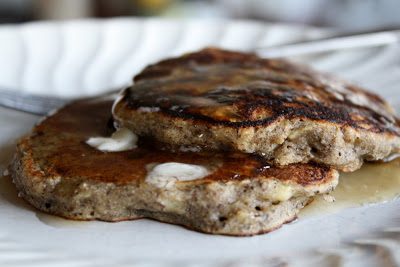 I make a double batch (the night before) and save the leftover batter in the fridge for another morning. The batter keeps for at least 24 hours, but quite possibly 48. (I’ll know tomorrow.)

Stir together the dry ingredients. Add the wet and stir lightly, just until combine. (At this point, you can refrigerate the batter for up to 24 hours, though they are best made right away, or at least so says Kim.)

Fry the pancakes in plenty of butter. The batter will be very thick, so put small dollops in the pan and then spread them out with the back of the spoon.