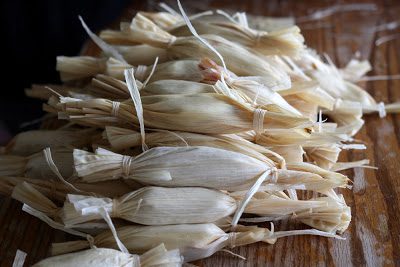 That’s what a tamale party is called, in case you didn’t know, which I didn’t—at least, not until I decided to have one.

When I learned that my whole family would be coming to our house for a not-on-Christmas dinner, I decided to make tamales:

Lots of people + big appetites + open-minded tastebuds = a chance for me to try something different, yee-haw. 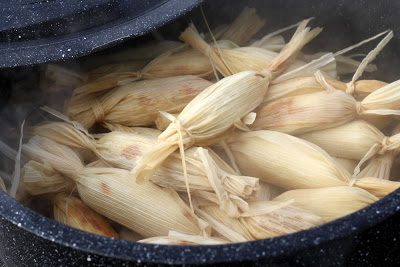 I’d never made tamales before and I didn’t particularly like the Nicaraguan tamales (called nacatamales)—giant, greasy, gelatinous piles of masa and meat, wrapped in a green banana leaf and boiled in water for hours on end—but I do like Mexican tamales. So I turned to Lisa’s blog, The Homesick Texan—

No. I’m getting this all wrong. It went like this: I was flipping though Lisa’s blog in search of the bacon-jalapeno cheese ball recipe (because Julie told me to) when I spied her tamales. I looked at the pictures, studied the recipes, and thought to myself, “That’s what I’ll do for the family. I’ll make tamales!” 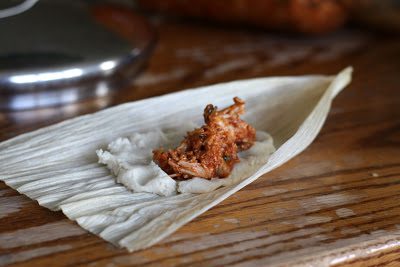 I emailed some friends in search of a tamale steamer, but no one had one. So I cornered my husband and made him promise he’d rig something up for me. He agreed (after a brief bout of second guessing my decision: why do you always pick things that are so complicated!), and I was able to finally turn my full attention to the delectable details of masa, pork, and chiles. 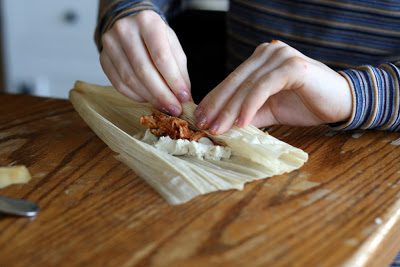 They say that making tamales is a big affair, requiring lots of work and many hands, but I found it to be much easier than I anticipated. I blackened the chiles and made the meat filling and the masa (dough) the day before, so all we had to do was assemble and steam the tamales. 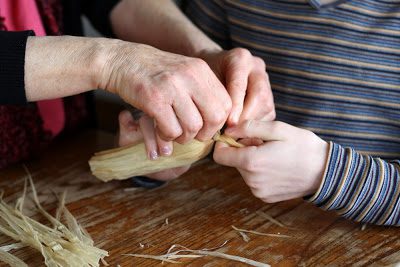 However, when it came time to stuff, roll, and tie the tamales, all the would-be tamale makers were off working on other projects, so it was my mother, my daughter, and I (with a little help from the other children) who assembled the tamales. 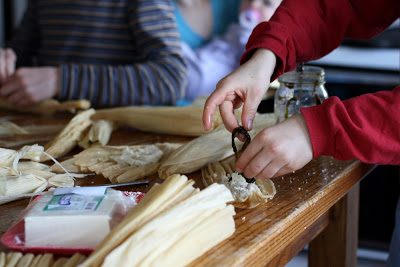 We made 60-plus pork tamales and 20-plus cheese and chili and it only took us about an hour. Making cut-out sugar cookies is harder. 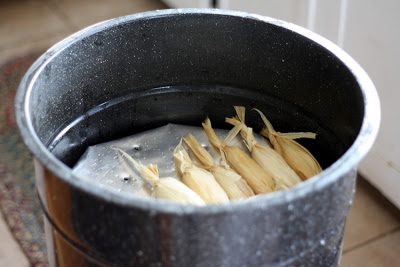 For the steamer, my husband poked holes through a piece of metal and bent it so it fit into my largest canner. For the other kettle, I used several metal measuring cups to support a metal roasting pan. 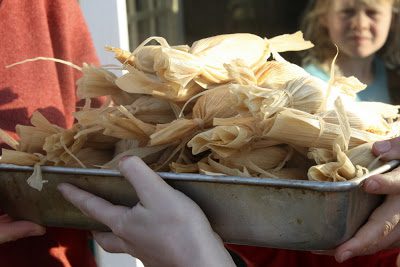 To help set the mood and get the tamale vibes going (and because I really had no idea what I was doing and there was a good chance the entire dinner would flop), I cranked up the tejano music. I hated the twangy tunes when I was living in Nicaragua, but I liked it well-enough during our tamalada. I think the music may have even enhanced the flavors. 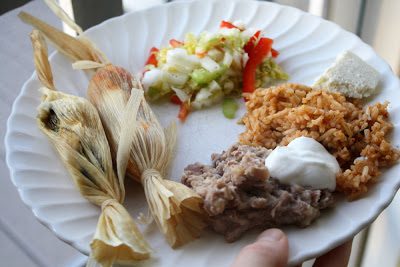 Also for our supper: refried beans and Mexican rice (both recipes courtesy of The Homesick Texan—thank you, Lisa) and my mother’s cabbage slaw, and leftover crumbly cheese (I bought the wrong kind) and salsa and crema. Dessert consisted of hot chocolate with marshmallows, coffee, cookies, citrus, and Christmas cake. 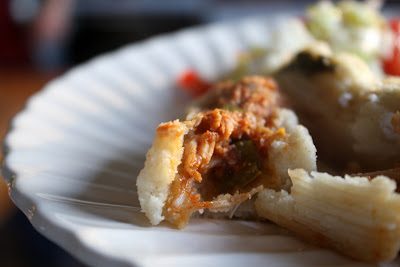 Tamales
Adapted from The Homesick Texan

*All components can be made ahead of time. I recommend you do so.

Cream the lard. Beat in the salt and a cup of flour. Now a cup of liquid. Continue adding the flour and liquid, alternating between the two and beating thoroughly after each addition. Keep track by making tally marks on a piece of scrap paper. Part way through, you’ll probably have to dump the whole mess into a large bowl and swap the beaters for a wooden spoon. Cover the masa tightly with plastic and store in the refrigerator until you are ready to make the tamales.

*I used only 5 jalapenos and the filling wasn’t spicy at all. Next time I’ll use the full 8 and maybe even add some of the seeds.
*The original recipe calls for 8 tomatoes, roasted and charred, but I used roasted tomato sauce instead.
*Also, I found the meat filling to be too dry, so I added a cup or two of the pork broth back in at the end. Next time I will add even more liquid.
*Don’t skimp on the salt.

Put the pork, half the onions and half the garlic, the salt and pepper, and a half cup of water in a large crock pot. Cook on high for 3-4 hours, or until the meat is cooked through. Remove the meat to a plate to cool and then shred into little pieces. Strain the broth and reserve (if not for the pork filling, then for the masa).

Puree the tomato sauce with the remaining garlic.

Heat the oil in a large pan and saute the remaining onion until translucent. Add the tomato sauce and jalapenos and cook for five more minutes. Add the shredded pork and heat through. The pork should be saucy and juicy, but not runny. If it’s too dry, add a cup (or three) of the reserved pork broth (or some chicken broth). Taste to correct seasonings. (I added some of the roasted poblano chilis—an excellent addition.)

Store the meat in the refrigerator (or freezer) until ready to use.

*I used only 2 chilis, but the flavor was so wonderful I recommend preparing more and then chopping up the extras and freezing them in little containers to add to future chili, rice, and bean dishes.
*The original recipe says to cut the chilis into thin strips and add one to each tamale. I thought the tamales could use more umph—next time I’ll make a mixture of (lots of) minced chilis and grated cheese.
*I bought the wrong kind of cheese—crumbly and dry. What you want is a mild, chewy, soft Mexican cheese. If you can’t find any, use Muenster or Jack.

Put the chilis on a baking sheet and broil until blistered black, turning them every few minutes. Cool slightly before coring and seeding. Cut into thin strips, or mince. Store prepared chilis in the refrigerator.

Soak the corn husks in a bowl of water for one hour. This makes them pliable, so they don’t break and crack when they bend. Drain the husks (just a few at a time—keep the rest in the water until you need them) and pat dry.

Place the husk lengthwise in front of you, the skinny end on one side and the wide end on the other. Place a handful (perhaps 1/3 cup?) of masa in the center of the tamale and pat it flat so it’s about 1/4 inch thick, leaving a border of husk all the way around (making sure it’s a particularly wide border on the sides, as those are the ends that will be tied). Top the masa with 1-2 tablespoons of meat or chili-cheese filling. Roll the tamales up as you would a sweet roll, not worrying if husks are pressed into the filling.

Tear a couple softened husks into strips and use the strips to tie the ends of the tamales shut—like giant Tootsie Rolls.

Put 3-4 inches of water in the bottom of the steamer. You want enough water that the kettle won’t boil dry (though one of my pots did and it wasn’t the end of the world), but keep it low enough so the tamales aren’t sitting in the water. Pile in the tamales and clap a lid on top.

Steam the tamales for 45 minutes, occasionally checking the water level. You know the tamales are done when the masa pulls away from the husk.

Serve the tamales straight up, or with whatever green or red salsa suits your fancy. Leftover tamales (rejoice!) can be refrigerated or frozen. Reheat in the microwave (or a small steamer).

This same time, years previous: eggnog, in which I throw my bread on the floor and stomp on it, delight