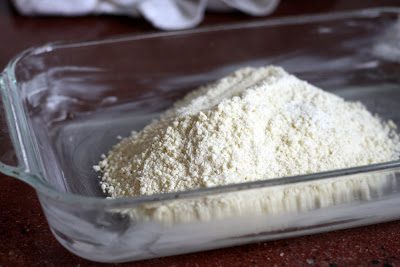 I’m not fully in the Christmas spirit yet, but I’m trying. (As my father would say, “Yes, you’re very trying, indeed.”)

We had our family meeting to discuss what Christmasy things we oughtn’t miss, two of the kids made their choice of Christmas cookies (neither of which are Actual Christmas Cookies), and we listened to a bit of Christmas music, but that’s about it. 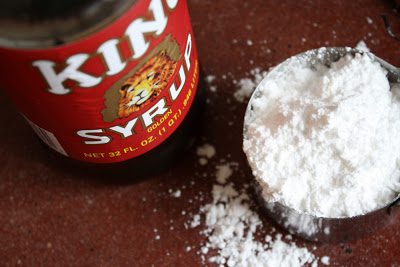 Perhaps the most Christmasy thing we’ve done is read Dickens’ A Christmas Carol. (Boy, there’s a lot of “Christmas” in these first paragraph. Just writing this might launch me into the spirit, fingertips first.) We finished the story last night and are going to see the play later this week. I’d love to listen to the radio version as well. I have fond memories of lounging on the brown shag living room rug when I was a kid, listening to Marley’s clanking chains through the radio speakers.

Maybe I’d feel more ready if we got the tree. 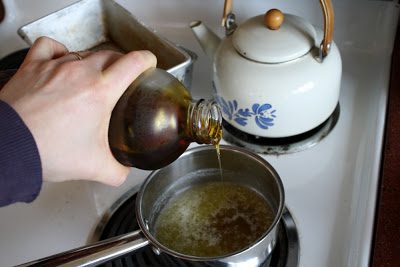 I need to focus on a bunch of Christmas baking before other stuff creeps up on me, though making lots of pretty cookies doesn’t excite me much. Probably because it takes so much time and my time is already packed with other stuff (and I don’t want to give up writing). Also, I have to make the same old same old—butter cookies, gingerbread, raisin-filled—and it’s the new and shiny that draws me in. But, sigh, Christmas is all about tradition. I mustn’t knock it. 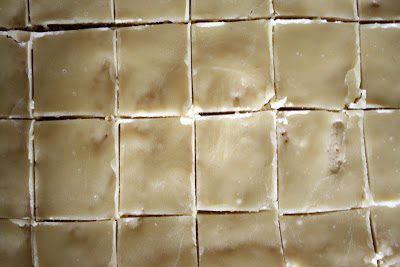 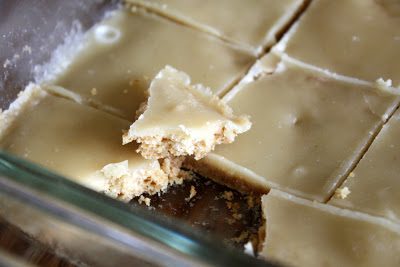 In some ways, this shortbread remind me of peppernuts, but more high-end and without the labor-intensive cutting. The texture couldn’t be better: the shortbread is crunchy buttery, while the icing is soft and cool and almost chewy in a caramel-toffee sort of way. That, plus the biting ginger, and these little treats are mouth fireworks just begging to dazzle. They certainly were the ideal thing for a sulking woman who is not in the Christmas spirit and doesn’t have much drive to bake. 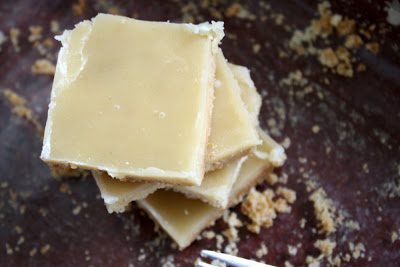 I tried sprinkling some minced candied ginger into the still-wet icing, and while I liked the flavor, it wasn’t the prettiest. The second time around, I left the ginger out all together, though I bet it would be good mixed into the shortbread bottom.

This recipe is open to interpretation. What about brown sugar instead of white, or molasses or maple syrup instead of golden syrup? And how about stirring some walnuts or pecans into the bubbling frosting? And maybe swapping cinnamon for the ginger?

Whatever you do, don’t stick the spoon you were using to spread the hot icing on the shortbread into your mouth. That’s just plain stupid (yesI’madork).

Put the flour, sugar, baking powder, ginger, and salt in the bowl of a food processor and pulse once or twice to combine. Add the butter and pulse until completely incorporated and the mixture looks like fine sand. (Alternately, just use your fingers to rub the butter into the dry ingredients.) Dump the mixture into a greased 9×13 pan, and firmly pat it down to make a bottom crust. Bake the shortbread at 350 degrees for 20-25 minutes.

When the shortbread is nearly done baking, make the icing. Melt the butter in a saucepan and add the remaining ingredients. Simmer for about 30 seconds, stirring constantly (the mixture will look greasy and lumpy at first, but it will quickly become smooth and satiny). Pour the icing over the hot shortbread, tilting the pan to cover it evenly.

Cutting the shortbread can be a little tricky since it wants to shatter every which way. To get even little squares, cut while it’s still quite warm. Or you can cool the shortbread in the pan and then cut it into artful shards with a knife. Either way it will still taste fantastic.

Display the shortbread in a pretty jar on the counter, or package well (in plastic or glass, as it’s bound to break if bumped around) and freeze for later use.

This same time, years previous: my kids are weird