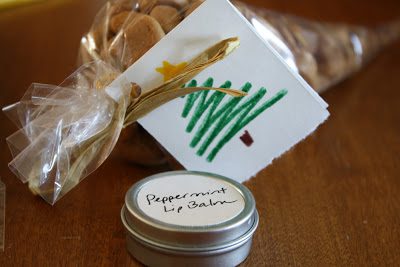 So some mice had a disco party on my kitchen counter the other night. They were leaping and prancing around like they owned the joint, or like they were practicing for the Nutcracker.

My husband hauled our half-asleep black cat over to the party and—shazaam—one of the mice was no longer dancing.

The cat now owns a free indoor pass (at least until the infestation is under control).

We trekked around the neighborhood, handing out festive tins of crack (and some bags of peppernuts and a couple lip balms). The kids were boinging all over the place.

Note to self: next year, practice approaching houses and knocking on doors before letting the kids do the real thing. The littlest twit of yours, especially, would benefit from some basic instruction. 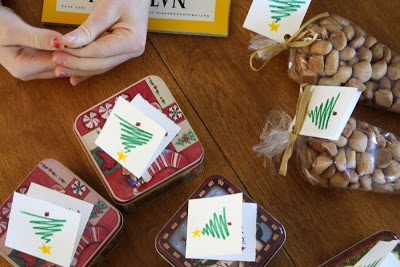 When I was packing up the Christmas goodies, my daughter entered the kitchen bearing an old National Geographic. “What’s this?” she asked, showing me a picture of a dead, bruised and battered little boy.

I scanned the caption. “It’s a war in another country. A bunch of people were killed, including some children.”

As I scribbled Christmas trees and drew stars on my note cards, she peppered me with questions. How old was he? Did he have any brothers and sisters? Where are his parents? And, Look! They put all his toys beside him on the bed.

I watched her out of the corner of my (misty) eye, waiting for her face to crumble and her shoulders to hunch forward. But they never did. 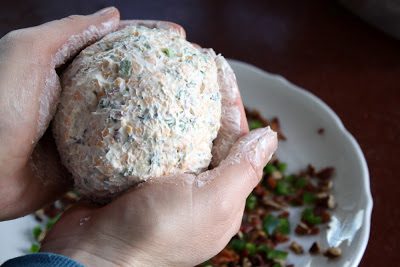 I made a cheese ball and even though I haven’t eaten it yet (I wrote this part of the post on Christmas Eve), I know it’s the best cheese ball ever and that it’s going to be a part of the rest of my life, so there. 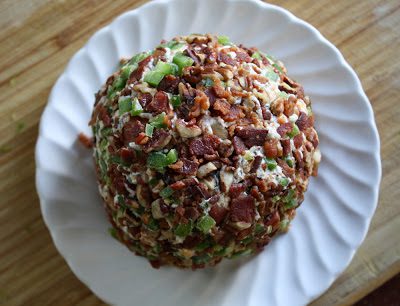 I bought fresh cilantro specifically for this recipe, but when I got it out of the fridge it had mysteriously turned into parsley. (I hate when that happens.) So I used some dried cilantro (that tastes more like cardboard than cilantro) and a tablespoon of chopped fresh parsley just for anyhow.

Mix together all the ingredients down through the salt, plus half of the bacon and half of the jalapeno. Shape the cheesy goop into a ball with your hands.

Mix together the remaining bacon and jalapeno, as well as the pecans, put them in a plate or shallow bowl, and roll the cheese ball around in the crumbles until it’s nicely coated. 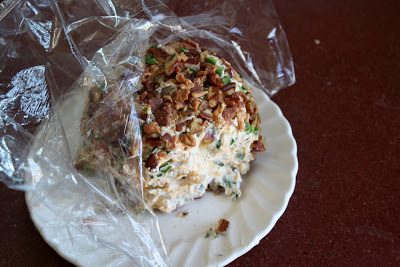 Cover the cheese ball with plastic and chill for an hour before serving with crackers (though I like my cheese ball at room temperature—it spreads better). 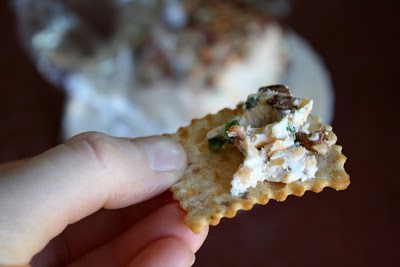 They’re back at it again. 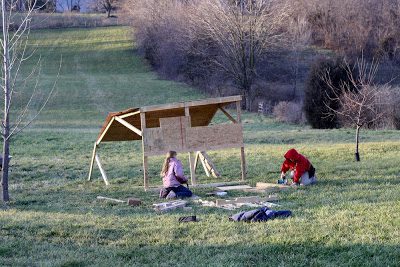 This time around, the tools are fancier. 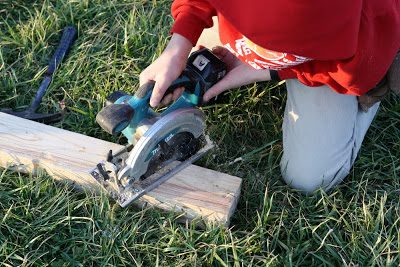 It made for a great holiday project, something to get them outside after gorging on candy and cookies.

I had a minor break down at our Christmas eve service. Three of my kids were in a little skit—dirty sneakers and dress-shirt collars poking out from under their robes, plastic ivy and pipe cleaner laurel wreaths, that sort of thing. Nickel was Quirinius. He had to stand up front beside his big brother (Cesar Augustus) and unfurl the registry scroll. But the scroll wouldn’t unfurl, so he tossed it out, as though a quick flick of the wrist would fix everything, but instead of unrolling, the scroll flew out of his hand and landed on the floor with a thunk.

That’s when I lost it, a giant belly laugh half exploding out of me. I pressed my lips together quick and held my breath, but that only made the belly trembles grow all the more violent. My eyes watered, my shoulders shook—I was helpless against the hilarity.

At that moment, when I was physically and emotionally completely out of control, at that moment all the tension of the last couple hours—all the yelling and running around and cleaning up the house and getting everyone through the shower and trying to be jovial because it’s Christmas Eve for Pete’s sake—all that tension peaked and I realized that—oh my word, I am not stable! I am going to start sobbing because my child just hurled his scroll on the ground!

I didn’t do The Ugly Cry, thank goodness. A couple more stifled gasps and the strain eased up. I was even composed enough to wink at my boys without falling to pieces, whew. 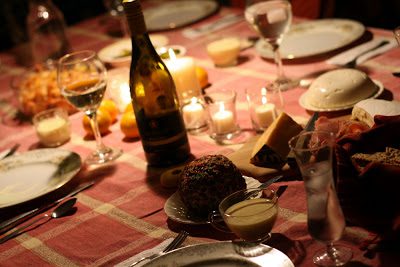 Supper restored me the rest of the way.

Even though we’ve told the children that it’s us doing the gift giving, our Santa pretending makes my younger daughter upset, almost angry even. 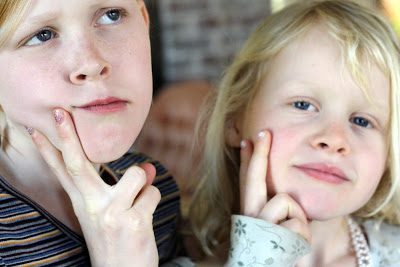 This morning, after the stockings and hoopla, she told me, once again, that she knows there’s no Santa. “Tell me for real, Mama. I know it’s you and Papa.”

“This really bothers you, doesn’t it,” I said. “Okay, so yes, Papa and I buy the gifts, but we like to pretend it’s not us, just for fun.”

“Who does the tooth fairy more, you or Papa?” 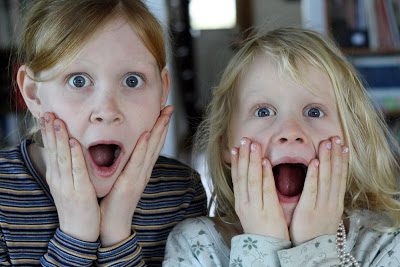 She smiled, pleased (and relieved?) to finally get a straight answer.

Later, she asked if she could tell the other kids the truth. They already know, I said, but she wanted to tell them anyway. So she did, and the big kids said, Yeah, we know, but for her, this truth-telling statement was big, I could tell. The air was cleared. She could finally relax.

My older daughter took her earrings out for the first time. 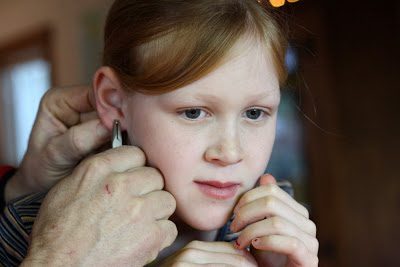 Except they were stuck, so my husband had to use a pair of pliers to wrench them from her ears, smooshing the earrings in the process. She put in a pair of dime earrings she had made for herself, but later, after she took them out so she could go roughhouse, she couldn’t get them back in. She needed the lightweight studs, but I, thinking they were too damaged to use, had thrown them away. 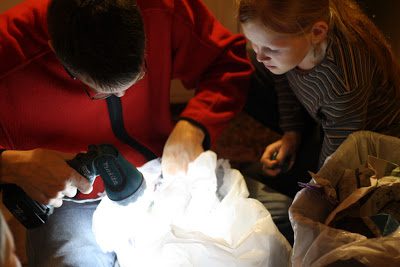 So she and her father meticulously went through the garbage, searching for the tiny studs, which they somehow found, cleaned, and made useable. The earrings slipped back in (with a little numbing cream), and the dreaded holes-growing-shut disaster was averted. 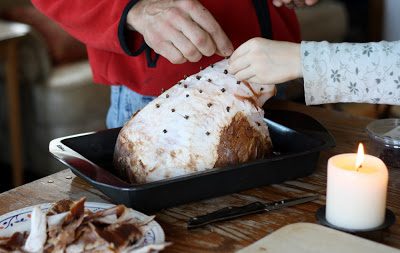 I read the first couple chapters of The Best Christmas Pageant Ever before bed on Christmas Eve, and we finished it up tonight. So much of our last 24 hours coincided with parts of the story: the kids acting out the Christmas story during our church service (my daughter was Mary—You really should’ve thumped that doll on the back like Imogene did, I told her), the bit about Imogene not being able to take out her hoop earrings for fear the holes would grow shut (Sound familiar, sweetie?), and the ham, of course. 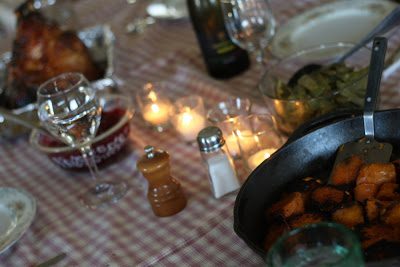 We didn’t bear ours down the center aisle of the church, though. We just ate it.

Hey! Unto you a child is born! 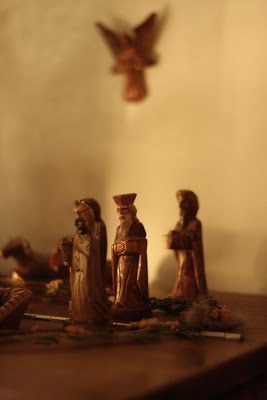 Peace and joy to you, sweet friends. Merry Christmas!