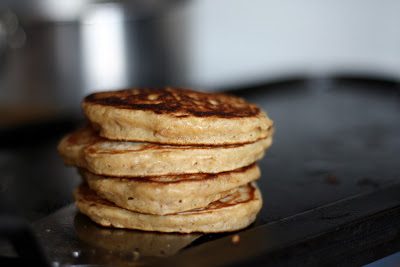 Remember the salad I made last week? The recipe originally called for bulgur, but I didn’t have any so I tried to use cracked wheat. But the cracked wheat cooked up kind of mushy, so I called my friend and she said bulgur and cracked wheat were basically the same thing but that bulgur was precooked. So I put the mushy cracked wheat in the refrigerator and switched to quinoa for the salad and all was well.

Saturday morning came and with it an urge for pancakes. Saturday mornings are supposed to be lazy, slow affairs punctuated with multiple cups of coffee and a carb-heavy kick-off. Or is that Sunday morning? Not sure on that one, but in either case, I’m a failure. The first weekend day, my husband is raring to jump into his projects, and the second one, we’re trying to get out the door without killing each other. So I usually dump granola in bowls and call it good.

But this Saturday morning was different. My husband was chomping at the bit even more than normal: he had a hot date with three other guys to get those panels on the roof right after lunch and there was lots of prep work to do. But I had time and a fair bit of energy despite my sore throat and head cold. I could handle standing by the stove with a spatula in my hand, I decided. Plus, that cooked cracked wheat was begging to be dealt with.

Intermission: solar panels
My husband submitted an application for a grant and we were accepted. The whole project is supposed to be done before Christmas so now he’s running around like crazy, punching holes in walls and ceilings, moving the freezers around, zipping up and down ladders. It kind of gives me a headache (but I’m not complaining). 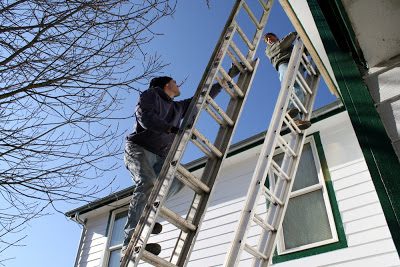 Saturday was the big Haul The Lunkers Up On The Roof Day. The guys got it done in an hour and a half, no sweat. 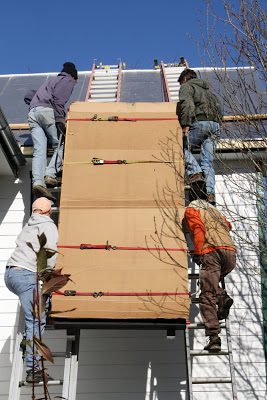 The hardest part (from my perspective) (and from my husband’s, he just informed me) was keeping my littlest from going up on the roof with them.

See these two guys sitting pretty in the sky with my husband? 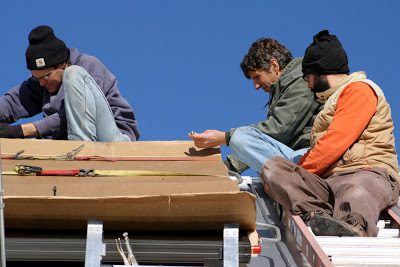 These are the guys my husband spends his days with. The one up higher is the boss, and the one down lower joined up with them a couple years ago. There’s so much I could say about these guys—like how the one enjoys throwing rocks at the porta-potty when my husband is inside it, or how the other rides his bike everywhere, two kitty litter buckets attached to either side, saddlebag fashion—but I’ll spare you all the gory details and give you two little tidbits instead:

Tidbit One: a couple days ago, the bearded guy called me to talk bread. He’d gotten some of my starter and was getting ready to wake it up and go to Baking Town but first had some questions regarding wheat and such. He hasn’t made a peep about the bread since then, so maybe it flopped and he’s not telling me because he doesn’t want to give me a sourdough starter complex?

Tidbit Two: When I walked out of the house to take pictures of the whole operation, Boss Man accosted me with a “Hey, Jennifer. I need a good gluten-free granola recipe. Do you have one?” I went back in the house and emailed him what I had, and the next afternoon I got a reply email: “Thanks Jennifer,  Here goes!” I haven’t heard a peep out of him since then, so maybe it went downhill?

My point: I’m surrounded by guys that bake.
My other point: my husband works with guys that willingly, graciously, generously come out to our house in the middle of their Saturday to help with our project.
My final point: I’m glad the panels are on the roof. 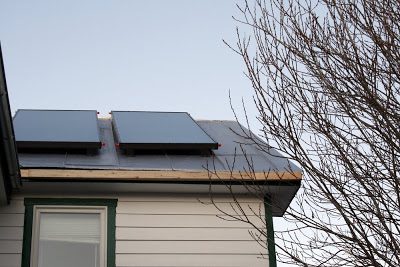 P.S. I spent this intermission mostly talking about my husband’s co-workers, but my brother also busted up his Saturday and put his life on the line (i.e. his butt on our roof) for our solar project. You should know, since we’re talking about bread and bikes and such, that my brother bakes with ease, and he rides his bike to work, too.

End of intermission and back to the pancakes.

I took Luisa’s Oatmeal Pancake recipe (that I’d already made once before), did some swapping and substituting, and came up with a splendiferous Saturday (or Sunday) morning pancake: hearty and filling, with a delightfully nutty texture from the cracked wheat. 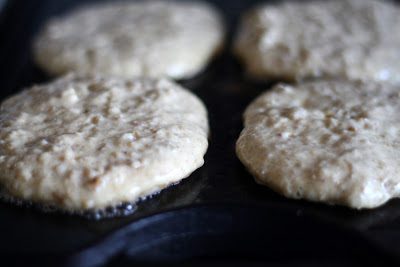 The kids, however, took a few bites and eyed their pancakes suspiciously. They said things like, What’s in these, Mama? And, I like the other kind better. They ate them then, but there was no pigging out. I bagged up the leftovers and stuck them in the freezer.

I eat a pancake each morning for my breakfast. I heat the pancake in the microwave and then top it with a dab of butter and a glug of syrup. I cut my cake into small pieces with my fork, and swirl each bite over the plate to mop up the syrup drips. Chewing slowly, contemplatively, I savor the complex textures, the depth of flavor. I’ve actually become rather protective of my pancake stash.

And wouldn’t you know, now all my mornings feel like Saturday morning!

(Just kidding. It seemed like the appropriate ending, though, so I had to say it.) 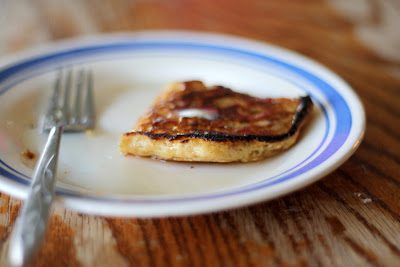 Cracked Wheat Pancakes
Adapted from Luisa’s blog The Wednesday Chef, and she, in turn, got it from Kim Boyce’s book Good to the Grain (that I ordered last night!)

In a large bowl, stir together the dry ingredients. Add the wet ingredients and stir lightly to combine. The batter will be thick.

Fry the pancakes, making sure to spread the batter out with the back of the ladle as soon as it hits the hot skillet. Serve with butter and syrup.

to cook the cracked wheat:
Place one cup of cracked wheat in a small saucepan and cover with 1 1/4 cups water. Bring to a gentle boil, stirring once or twice. Reduce the heat to low and simmer without stirring, uncovered, for about 15 minutes, or until all the water has evaporated. Fluff with a fork.