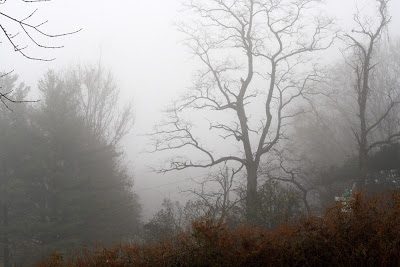 I’m feeling chatty. Like I just want to curl up with my computer and talk, you know? Not about some preordained topic or event, not about a recipe, not about anything, really. Just random stuff, whatever falls from my fingertips.

It’s a dreary, rainy, foggy, dark day. I feel kind of sad, kind of excited, kind of peaceful, kind of stressed, and kind of mellow. Most days, one particular feeling rises to the surface and beats all the others into submission, but not today.

I’ve been rather bored lately. (Yes, I do realize I was just complaining about being super busy. But you can be super busy and still bored, did you know that?) Last night, I counted out the many ways in which I am bored to my husband and he burst into tears. Just kidding, about the tears, but I did bore him to sleep. He argued with me for a few minutes about the ridiculousness of everything I was saying and then said, “Isn’t your period coming?” and we both busted up laughing, and then his eyelids drooped and he said, “Can we go to bed now?”

I’ve kind of lost my will to cook. Part of the problem may be that ever since my decade of breast feeding ended, I’ve never been back down to my pre-pregnancy weight. I’ve made some substantial changes (greatly reducing snacks and junk food and trying to get exercise), and even though I feel like I’m not over-eating at all (in fact, it can be depressing how little I’m actually eating), the last few pounds aren’t budging.

Part of me thinks this is fine—I’m still in my normal weight range and I’m certainly not overweight—but another part of me worries I’m on a slippery slope. A pound here, a pound there, a pound of pounds EVERYWHERE.

What makes it all the more confusing is:

a. I never really had a solid grasp on a healthy weight before I started the baby-making marathon
b. my body has changed shape after popping out four humans—how much of that changed shape is inevitable?
c. do I really want to spend years tweaking and fretting and worrying when I’ll end up a little pile of organic matter in just a few more decades?
d. but I certainly want to be healthy
e. and it’d be nice to look attractive, too
f. (I’m not talking about inner beauty here, either. Besides, how can I act all confident and sunshiney if I feel like I look bad?)
g. is it lazy to accept my tummy rolls? Maybe I’m supposed to accept them? Nurture them? (Okay, okay. So that’s going a little too far.)
h. BUT I DON’T WANT TO HAVE TUMMY ROLLS, WAH.

I could go on and on. Like, this is stupid because I am healthy. Or, the women in Nicaragua were all thick around the middle and probably never gave a second thought to that extra padding except to be grateful for it. In fact, the majority of women thicken in the middle, even those that never have children. It’s a part of life, I think. Right?

I could starve myself and run for miles and knock off the pounds, I’m sure. But I don’t want to spend my time and energy that way. Besides, I think I should be allowed to eat when I’m hungry and till I’m full. Isn’t that kind of basic?

Clearly, it’s all about balance and I have none.

This really is relevant to the not-cooking-so-much-anymore issue: it’s not as much fun to cook if you aren’t going to eat it. I’m not that kind of cook.

I’ve kind of decided to ignore the whole quandary right now and cook anyway. I’ll just eat good breakfasts, go for walks when I can, and pass on the nachos (usually) at bedtime … and make a boatload of sweet rolls just because. 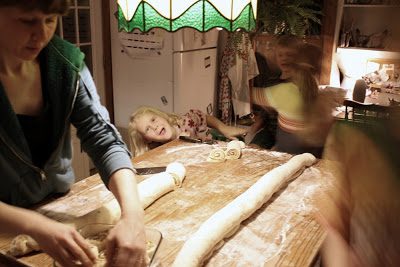 I rolled them out after supper and my little boy informed me that the rolled-out dough was the same size as the kitchen floor rug. I never know how to roll out the dough when I make such a huge recipe—dress and roll half the dough and then the other half? or do it all at once and make tire-sized sweet rolls?—but this time I got smart. I rolled it all out at once, dressed it, and then used a pizza cutter to slice it in half. Rolled up in opposite directions, and I had two long sweet rolls ready to slice. Problem solved.

That night, we all clustered around the computer on stools to watch a movie while I baked pan after pan of buttery, cinnamony sweet rolls. Rolls done, we crowded around the table, poured glasses of cold milk, and I let the kids eat till they popped. Because hey, how many times in your life do you get to have fresh-from-the-oven, homemade sweet rolls for a bedtime snack? Exactly.

I had another sweet roll epiphany that night. (I was on a roll.) (Tee-hee, a roll. Get it?) I was running out of glass baking pans, so I greased up one of my bread pans and stacked in a bunch of rolls on their sides. I ended up with a pretty loaf of pull-apart sweet rolls. 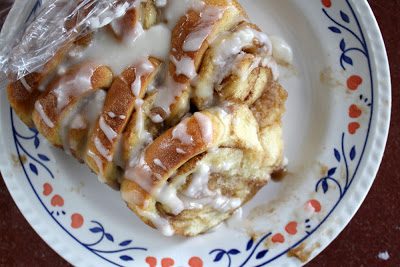 The genius of this method is that you can fit a whole lot more rolls in the oven when they’re stacked in loaf pans than when they’re laying flat on their backs in 9 x 13 glass pans, thus greatly speeding up the baking process. Plus, they’re easier to store and reheat. I’m kind of smitten.

(That movie we watched whilst our very pores became infused with the yeasty smell of sweet rolls? The Human Planet. Have you seen this amazing series yet? It’s nearly six hours of gorgeous photography and incredible stories. So far we’ve seen disc one—there are three total—for the ocean part, I kept getting short of breath; for the dessert (I mean DESERT) part, the kids kept jumping up for drinks of water; and for the arctic part, we huddled close to keep warm. I can’t recommend this series highly enough.)

Changing the subject: we’re starting to wonder if our youngest daughter is sleep walking. The other morning when my husband came downstairs at 5:30, all the lights were on and Sweetsie was sound asleep on the sofa. She said she didn’t remember turning the lights on.

My husband found her downstairs this morning at 2 am—same story. He even took a blurry picture to document it. 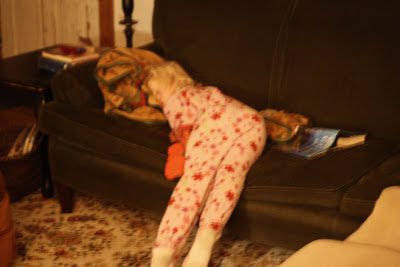 She’s collapsed against the sofa because there were books on it. It must not have occurred to her to move them?

Her sleeping is getting progressively rockier. After discovering her downstairs this morning, my husband put her in bed with me and took himself off to her abandoned (and very comfortable) bed. Sweetsie tossed and turned, stole my sheets, mumbled Harry Potter curses, and was up at six, begging me to take her downstairs.

Perhaps we should tie her ankle to the bedpost?

Also, she’s found a substitute for her spit rag (note the red rag she’s holding). We might be back to square one.

There’s more to say, but I’d better call it quits. The kids are up and the rain is falling and I need (want?) (no, it’s a need—cranberries are central to my emotional well-being) to bake a pie and prepare for a meeting tonight.

This same time, years previous: pasta with creamy pumpkin sauce (I made this for supper last night – delicious), steel-cut oatmeal