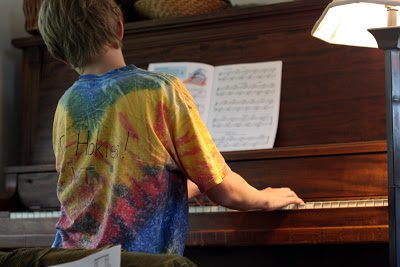 On two separate occasions now, my son has played piano in church. There are many lessons to be gleaned from the experience, and not all of them have to do with piano playing.

I choose the pieces (with his approval, usually) a month ahead of time, and then I drill him batty, nitpicking the dynamics, demanding perfection, calling him on his tense shoulders or hanging-open mouth. I yell all sorts of nonsense at him, things that would probably make a real piano teacher cringe. “Curl the notes! The top ones, slow them down! Even! Steady! Feel the music! Sit up straight! Don’t hit that note again! It’s not in the song! YOU’RE GOING TOO FAST. ONE-TWO-THREE-FOUR-STAY-WITH-ME!”

At least two times before the actual event, I have him practice the songs on the church piano. The day before he plays, I help him trim and clean his nails (whoever heard of playing piano with dirty nails, gross, I mutter), and the day of, we arrive at church early so he can play through the songs several more times.

Fifteen minutes before the service starts, I go completely OCD: go to the bathroom; get a drink; blow your nose; put chapstick on; sit on your hands so your fingers stay warm. I pump him up with lots of positive stuff, too: you’re handsome; you know this music inside and out; you’ll be awesome; smile. He pretty much takes my heckling in stride, only occasionally brushing me off or muttering an annoyed Mom!

It’s a little insane, but then again, not really. It takes that much work to do your best, and the work he does is pittance when compared to what professionals go through. Just ask your resident painter, writer, photographer, chef, builder, etc. (Or Amy Chua, for that matter. Thanks to her, I’ve upped my expectations of my children, roar.)

Funny thing is, my son doesn’t get nervous till the last minute, and the only way I can tell is because he keeps checking the bulletin. Once up front, he plays with complete confidence. At least that’s what it sounds like—I only listen, too nervous to even look his direction.

(Disclaimer: I know nothing about teaching the piano. When my piano teacher friend was visiting the other week, I asked her to please listen to my son play through one of his pieces, just to listen and look for any red flags. When he finished, she said, “That was great, but one question. How do you teach the pedal?”

So she explained the pedal, and after she left, I had him play through the song several more times, this time with me crouched on the floor beside him yelling, UP DOWN! UP DOWN! UP DOWN! until he got the hang of it and we both had the giggles.)

Back in the spring, my son did a piece for the offertory that was light and lively. It ended with a playful flourish that caught people off guard which led to laughter and applause. And then my ever-the-ham son, who was caught off guard himself by their reaction, gave a couple little vigorous bows. Not wanting to squelch his pride and happiness right then, I decided to save my comments for the next time he played.

So on our way to church this past Sunday morning, just the two of us chugging along in my husband’s pick-up, our eyes nervously watching the near-empty gas tank’s needle (as though staring at it would make the gas last longer), I explained what it means to create a space of worship.

“It’s an important job,” I said. “People come to church with all sorts of experiences and feelings and it’s the job of the worship leaders and musicians and speakers to create a place that invites people in and allows them to connect to something bigger and deeper. Worship leaders that tell rambly stories and crack jokes are drawing attention to themselves which is not the point of worship. Your job as piano player is to do the best you can while trying to be invisible.”

“So I shouldn’t have bowed last time?” He sure didn’t waste any time making the connection, darn it.

“Oh, I don’t know,” I said, stalling for time, choosing my words carefully. “Pianists are taught to bow after they give a recital, so in some situations it’s quite appropriate. But for church, it’s probably best not to. If people clap for you, just smile at them and go sit down.”

This time around, no one clapped. “It’s not because you didn’t do well,” I assured him. “In fact, it’s the opposite. It’s a sign that your playing fit into the service. Your playing is growing up.”

The first time my son played in church and someone thanked him, he mumbled a hurried thanks and turned away, flustered and embarrassed.

Not a minute later, another person approached with compliments. My son looked the person directly in the eyes, smiled, and said “Thank you.” My eyes bugged.

I was surprised on two accounts:

Of course kids want to act mature! Of course they want to know how to handle themselves! Why would I think otherwise?

Sometimes I fall prey to the thinking that kids figure everything out on their own. They do figure out an awful lot, it’s true, but sometimes a well-placed pointer can make a world of difference.

Give your gifts to the church!

That’s the mantra I’ve heard all my life, but I see it the other way round. The church gives us gifts, gifts of community, support, and opportunity. Where else do people of all ages get to try their hand at such a variety of skills—singing, speaking, acting, teaching, leading, mentoring—almost all of them in a public setting, too?

On Sunday, my son busted his tail doing the best he could and in return he received affirmation and encouragement via shoulder punches, high-fives, requests to play again, and even a note of thanks from the lead pastor.