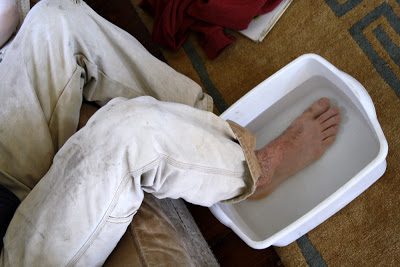 My husband loves to make analogies. They’re usually really bad, too, and they make me roll my eyes and snort. In fact, he made one just the other day and I thought to myself, I need to remember this one so I can use it as an example of his analogy badness, but it was so bad that I can’t even remember it now.

However, the one he made two weeks ago is not quite as easy to forget because he got injured in the process.

I wasn’t home for the moment of reckoning, and he didn’t say anything to me about it when I got back. It wasn’t until I noticed he was limping and flat-out demanded an explanation that I found out just how bad his analogies can be.

Apparently, my youngest son was driving him batty, running around helter-skelter, bothering people and doing a bunch of things that would only serve get him in trouble. This was the day before the pie party, so there was lots of work to get done and deviant behavior was not cool. So finally my fed-up-to-his-eyeballs husband launched into a lecture around the theme “Shooting Yourself In The Foot.” In his noble efforts to help his five-year-old son grasp the concept of how totally stupid it is to shoot yourself in the foot, my husband kicked himself in the ankle.

His goal was to knock his left foot off the ground with his right so he’d end up sprawled on the floor, but instead his left foot stayed firmly planted and he jammed his right foot something fierce. It really, really hurt, he reported.

For the next couple hours he was mostly okay, but as the day progressed, the pain worsened so that by mid afternoon he was fully laid up on the couch, his foot elevated, and with a bunch of painkillers coursing through his veins. He was researching foot injuries, and I was fretting about when we should go to the hospital.

“I can’t go to the hospital,” he’d whine. “What am I going to say? That I kicked myself? They’ll think I’m an idiot!” And then we’d howl with laughter.

I wasn’t always laughing though, seeing as the remaining mountain of cleaning was mine to climb alone. I flew around the house mumbling, I can’t believe it. And, Of all the times to injure yourself. And, If you can’t work for several weeks because of this—oh, good grief!

He crawled upstairs to bed that night. I stood at the top and just shook my head.

The next morning, he was considerably better. He was even able to vacuum the floors and clean the bathrooms. I had to drive to church.

“Don’t you dare tell anyone about this,” he said.

“Okay, but I am going to blog about it.” I giggled wickedly. “Just you wait.” 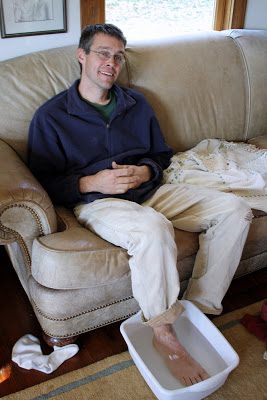 Note: no husband was taken advantage of in the writing of this post. He read it, made corrections, and despite his injured pride and a few lingering twinges of humiliation, approved it for publication. What a man.