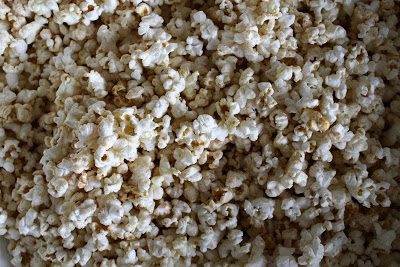 On Saturday, we all went to the annual Mennonite Relief Sale. It’s a big-time event, with a huge auction, lots of baked goods, ethnic food, fun stuff for kids, and so on, with all proceeds going towards Mennonite Central Committee, our church’s relief organization.

In other words, the more donuts you buy, the more you help the poor.

It seems kind of screwy to me, this type of do-gooderism. All the clapping and cheering when a quilt bid shoots up over the thousand dollar mark. The sugar highs, the bloated stomachs, the cheap toys that will soon find their way to a landfill. Is this really an effective way to alleviate poverty?

Yes, yes, it’s about community, I know. It’s about a bunch of people rallying for a common cause. It’s festive, kind of like a huge family reunion, and I haven’t missed the weekend for years.

It’s tons of fun, but still, it makes me feel funny.

Anyway, it was while I was standing outside the hamburger and hotdog stand waiting for my son to finish up his shift that I had an important conversation with my friend. It was about popcorn. (I think it’s safe to say that everything in my life revolves around food, yes?)

We were discussing kettle corn (which was being sold there, but of course), and she said her family had recently started making popcorn with maple sugar. “I pop the corn in coconut oil, and we add a couple spoonfuls of maple sugar and some cinnamon to the kernels. Then when it’s done, we add butter and salt, too.”

“Cinnamon?” I asked, not really paying attention. I wasn’t trying to be rude. It’s just that we were surrounded by hundreds of fellow Mennonite, and I was a little distracted.

“Mm. Maple and cinnamon, it does sound good…..” My eyes and mind were wandering again. I forced them to focus. “But don’t you have trouble with it burning?”

“No, we just shake and stir the whole time. The popcorn starts to stick together because of the sugar, so you have to get it out of the pan as soon as it’s done.”

“Mmm… Hey, who’s that woman over there?” I said, because I really can’t carry on a conversation and people watch at the same time. “Does she look familiar to you?” 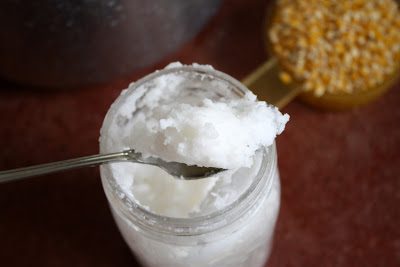 By bedtime that night, the too-many-donuts-and-potato chips feeling had faded, but the passing popcorn conversation lingered. And as it lingered, it intensified, so that by the following night, after I had made a triple batch of sweet and spicy popcorn and a triple batch of regular butter popcorn (that’s three cups of kernels, eek), I grabbed the bag of homemade maple sugar out of the freezer and set the popper back on the burner for one more batch of popcorn. 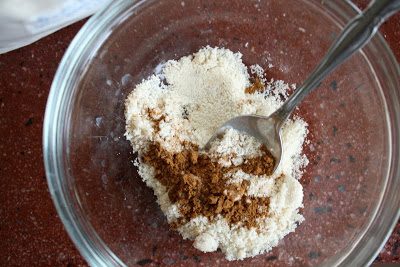 And, wow! Holy kerpopping corn! Not only did my husband tell me he liked it, he made eye contact with me while saying so. And folks, when I get the eye contact, it means something is seriously good. 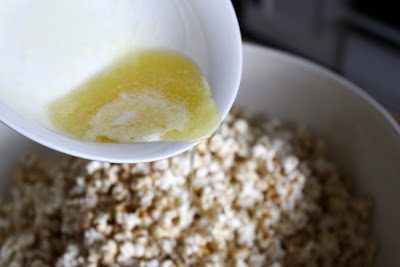 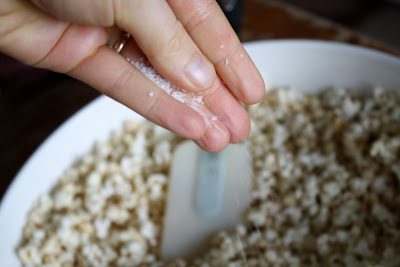 The melted maple sugar does this fantastic thing where it coats the kernels with a crust so faint and delicate that it disappears with the first bite. And the maple-cinnamon flavor is profoundly delicious but so mild that it makes you want to cram handfuls of the stuff into your mouth on the off chance you might capture more of its ethereal sweetness. But no matter how much you cram, the flavor remains aloof, more an essence than a solid taste. Such a tease! 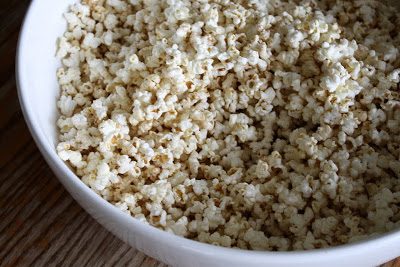 This is the first (and second) time I’ve ever made kettle corn successfully and it’s all because of my whirley-pop. I’m in love with my whirley-pop and I’m even more in love with it now that I know it can turn out such awesome popcorn.

Put the popper on medium-high heat and add the coconut oil. When the oil is good and hot, dump in the popcorn kernels, maple sugar, and cinnamon. Stir without ceasing until the popping has stopped. Immediately dump the popcorn into a large bowl and toss with melted butter and salt.