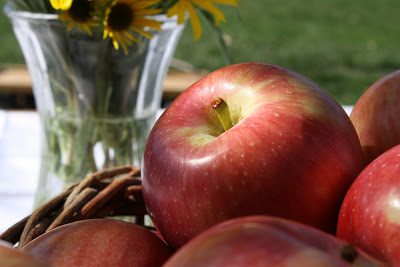 “What’s wrong with Stayman?” my husband asked over the phone. There was a fruit stand close to where he was working and he had stopped by to pick up some apples for me.

“There’s nothing wrong with them,” I said, “but according to my notes, we like York best for storing and Fuji for eating.”

“Okay, I’ll get some,” he said, and hung up. I didn’t hear back from him, so several hours later I gave him a ring.

“Did you get the apples?” I asked.

“Let’s not talk about it,” he mumbled.

“What do you mean? Didn’t they have any?”

“Um, hon?” I said, finally catching on, “how much did the apples cost?”

A brief silence, and then, “Twenty-five dollars.”

“Twenty-five dollars a bushel?” I yelped. “And you bought them? You dingbat!”

And then our barely-limping conversation tumbled rapidly downhill. Ugly, it was. When he came home and parked the two boxes of apples on the picnic table, tempers flared all over again. But he’d agreed to pay the 14 dollars—the difference in the cost between apples from my favorite local orchard and this overpriced stand—out of his personal money, so I shut up.

The following morning I lugged the apples down to the cellar and transferred the Yorks into one of our bushel crates—I needed the cardboard box to store my newspaper-wrapped sweet potatoes—and was dismayed to discover that the apples only filled the bushel three-quarters of the way full. Bushel containers are different sizes and there’s a chance ours was larger, but my favorite orchard gives us bushels that fill our crates, and for much less money, too, humph. The steam started to puff out my ears all over again.

And then I noticed the apples were bruised. Squishy spots everywhere! So much for long-term storage.

I stomped upstairs and called my husband. “I’m taking them back,” I hotly announced.

He sighed, “Is it really worth it to drive all the way back just to save a few dollars?”

“Yes, it is. This place is ripping their customers off and I will not stand for it.”

The woman who answered the phone quickly handed me off to her superior.

“Yes, my husband bought some apples from you yesterday, and I’d like to return them, please.”

“Can you tell me what’s wrong with them?”

“Well, yes. They’re overpriced, which is our problem, I know. But also, the bushels aren’t filled the whole way, and the apples are bruised.”

“Our apples are good quality,” she said defensively, “and it’s not our fault that they cost more than other places. That was your choice.”

“Yes, I know,” I said, immediately regretting I mentioned the price. “But we got the apples for long-term storage and they won’t last, bruised as they are.”

She then attempted to convince me—via a detailed explanation of their grading system—that the motley, not-full bushel of bruised apples was the best out there.

“So can I bring them back tomorrow?” I said.

She took my name and number and said she’d get back to me later on that evening.

“Maybe they’re dirt poor, barely hanging on by a thread,” my mother said. “Maybe your fifty dollars is what’s saved them.”

“Whatever, Mom,” I snapped.

Loreen still hadn’t called back by the time I had to leave for my evening church meeting, so I coached my husband on what to say if she should happen to call. “Her name is Loreen,” I said, not wanting him to be caught off-guard and accidentally give up the apple battle.

A brilliant idea hit me as soon as I slipped into the driver’s seat, and I was dialing my home number before I was even out of the driveway. My husband (bless his overpriced apple-buying heart) answered.

“Hello, this is Loreen from the orchard!” I blared in a southern, hickville accent (which is quite different from Loreen’s real voice, but he didn’t know that now, did he?) “There is no way in hell (except I pronounced it ha-a-ill) we is going to take back them apples!”

Silence, and then a shocked, “Excuse me?”

“I SA-A-ID,” I hollered, barely able to keep my voice steady, the giggles bubbling up from my belly like hilarious little hiccups, “THERE IS NO WAY IN HA-A-ILL WE IS GOING TO TAKE BACK THEM APPLES!”

“Honey, it’s me!” I screamed, bouncing up and down in my seat and laughing so hard I could hardly see the road. “I love you so much! Hahahaha, heeheeheehee! Did I get you?”

I called the fruit stand the next morning. (“She’s not going to call you back,” my husband had correctly forecasted.)

I cut straight to the chase. “Can I return the apples this morning?”

“The owner is out of town until Monday and I’m pretty sure he’ll say you can’t return them,” Loreen said, her voice hard. “Your dissatisfaction with the price is not our problem—”

“No, the apples are bruised,” I said slowly, clearly, my voice equally steely.

“Well, your husband had every opportunity to open the box and look at them.”

“Sooo,” my speech slowed to a crawl, “you are not concerned with customer satisfaction?”

“Are you really saying you won’t let me return them?”

“Okay. Well, thank you. This is really interesting and helpful for me to know, especially in how I relate to others in the valley.” Which is my pathetic version of a veiled threat.

You broke my heart, my consumer confidence, and my bank account. We’re through.

At least I got to be Loreen for a little. That was fun.

not one of Loreen’s apples