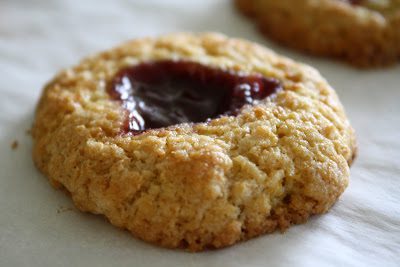 I was planning to do a post on potluck meals today. I was even taking notes with pen and paper. But then I ate some of the cookies—three, to be exact—that just came out of the oven, and suddenly potluck meals were no longer relevant.

This morning my youngest woke up with cookies on the brain. As soon as I walked in the door after my morning run, the little lad started peppering me with questions. I couldn’t quite understand what he was saying at first—probably because my brain was still trying to catch up from the whiplash I’d just inflicted upon it: cozy dreaming to jolting pavement pounding to little voice yammering up at me—just too many transitions, and without coffee, too.

But I got my shower and made my brew and then I started to comprehend. He was saying things like: “Where’s that book that had how to make that cake you made?” And, “The one of the cake that we burned? That was in the fridge?”

Me, slowly catching on, “Oh, the chocolate cake?”

“Yeah, where’s the book that tells how to make it?”

“You want the recipe?” (This was weird.) “It’s in the latest Bon Appétit magazine. Here.” And I dug it out of the pile on the end table.

He settled down on the sofa and commenced a-flipping through the pages, mumbling, “There’s something I’m looking for… ” Then, triumphantly, “This, Mama! I want to make these cookies. Can we make these today? Can we make them, Mama? Can we?”

His finger jabbed at a picture of jam-filled cookies.

“Actually, I was wanting to try that recipe, so yes, we’ll make them. But later.”

“We’ll have to go pick the raspberries,” he announced excitedly. “There’s raspberries on top, see?”

A couple minutes later he started up again. “Can we make the cookies now, Mama?” 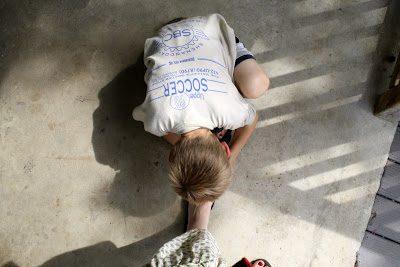 By then I was deeply immersed in the internets but I surfaced long enough to mutter, “Shush. Not now.” 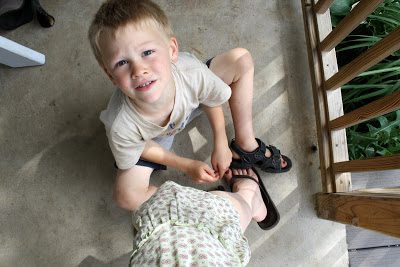 “I’m going to call the police ‘cause you’re not making the cookies!” he announced.

And so it went, all morning long. 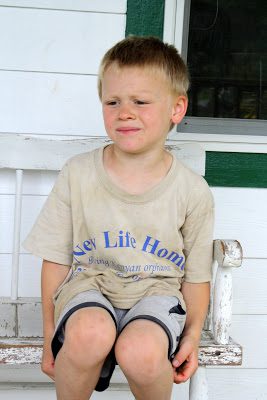 The kid was on a mission. He was merciless. He was obsessed. He was rabid with cookie lust. He trailed me with that magazine, flapping it in my face every time I turned around. It was unreal and completely ridiculous. (At one point he yelled up the stairs to me where I was straightening a bedroom, “Can we have Thanksgiving?” Boy oh boy, the kid was focused!) 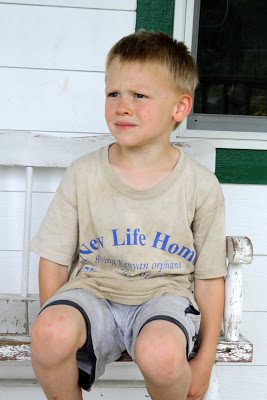 Finally, right before lunch, I decided it was time to zip his pesky yapper and make good on my word. Out came the whole wheat flour, baking powder, sugar, butter, and eggs and I whipped them babies up. I plopped grape jelly into half the cookie bellies while The Cookie Hound Extraordinaire spooned apricot into the other.

While the cookies baked, the children devoured a pot of peas and nearly an entire pan of mac and cheese, and then, then, they each got to pick one still-warm cookie off the tray, and—oh glory be! That cookie-obsessed child was silent! His craving sated, the tension vaporized, and I—nay, the very atmosphere—heaved a sigh of relief.

And then I sat down to write about potlucks but ended up feasting on cookies and writing this post instead. 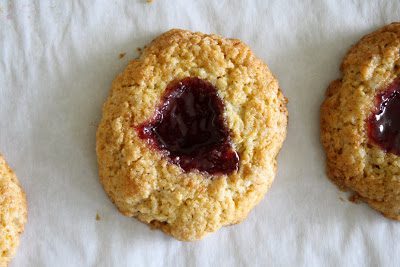 I’m not exactly sure why they call these “shortbread cookies.” In my book, shortbread is dry, crumbly, and super buttery (and delicious). These cookies, on the other hand, have a tender, soft interior with a slight crunch around the edges. The wheat flour gives them a deeper flavor and nubbly, nutty texture that I’m wild about. And then there’s the jam, the lovely fruitiness that jacks up the cookie’s adorable factor and bestows the perfect kiss of sweet. It’s enough to make a person weak in the knees.

Which you would be wise to do.

P.S. My cookie consumption total continued to rise during the writing of this post. The final stats: five.

P.P.P.S. Pictures of Beggar Boy taken at an earlier, non-cookie lusting date. But they get the point across, me thinks. 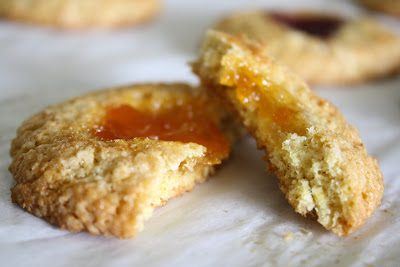 I used cooked jam in this recipe—I think a freezer jam would be a little inferior. It’s just a feeling I have, but I could be wrong…

Stir together the flour, sugar and baking powder. Rub in the butter with your fingers. Beat together the egg and extra yolk and stir it into the sandy buttery mixture. Shape the dough into about 24 balls and place the balls on two parchment-lined baking sheets. Make an indentation with your thumb in each ball of dough and spoon in a little jelly, about ½ teaspoon per cookie. Bake the cookies at 375 degrees for 10-12 minutes.