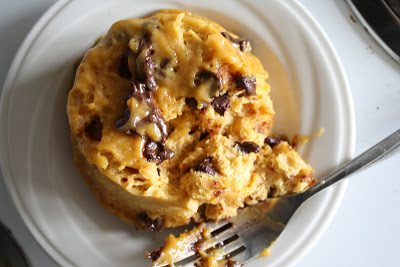 So I’m in the middle of making enough applesauce to last a year (that’s a good thing) and my feet are killing me (that’s a bad thing) so I plunk down at the computer for just a sec to catch my breath (that’s a stupid thing) and then I spy a post for a two-minute peanut butter chocolate cake (that’s an exciting thing). (And now I’m going to stop with the parenthesis. That’s a smart thing.) Quick like, I (mostly) commit the recipe to memory, and then, all sneaky like so my husband who has been working even harder than me for even longer doesn’t see, I grab a bowl and some measuring spoons and set to. When the phone rings and my friend—the one who has spent her whole day putting up all the juice tomatoes I threw at her the night before—chirps, “Whatcha doin’,” I hiss into the phone real quiet like and say, “Making peanut butter chocolate cake,” and then I cringe while she screams in my ear, “WHAT ARE YOU DOING MAKING A PEANUT BUTTER CHOCOLATE CAKE ON A DAY WHEN YOU’RE MAKING APPLESAUCE? WHEN YOU MAKE APPLESAUCE YOU’RE NOT SUPPOSED TO DO ANYTHING ELSE! DON’T YOU KNOW THAT?”

A measure, stir, and beep-beep-beep later, I am dumping the ramekin of cake onto a plate, and the kids and I are stuffing it into our mouths. My husband never even knew enough to bleet. Shazaam!

Later, after the mountains of clean-up (most of which my husband did while I took the kids to the pool for a little blow-off-steam time), I turned out another two-minute cake. I was rather tickled with my new skill, but there were drawbacks, too.

Like the little problem of texture. The cake is kind of spongy and boing-oing-oingy, like what I’d expect microwave baked goods to taste like and thus the reason I’ve never baked with microwaves before. Perhaps it needed less time in the zapper? Forty-five seconds? Thirty?

Also, the cake turned an unappetizing gray—perhaps due to the type of cocoa I used?

But the flavor was yummy, and the pockets of melty chocolate were pretty close to glorious. And then I realized that, hey, the cake is practically GOOD for me what with the egg, peanut butter, and only one tablespoon of brown sugar, whoa baby.

So this afternoon I made it again, but this time without the cocoa. The cake was much easier on the eye, but the texture was still spongy, and the insides were drier while the edges were gooey. Weird. But good? Maybe?

I’m still not sure what to think. Is this cake a good idea, or a super-duper bad one and I’m just too mired in applesauce to see clearly? Am I going all cliché on the world if I start nuking my desserts? Is it like getting giddy over jello? (No offense, jello lovers. Jello’s just not my thang.) 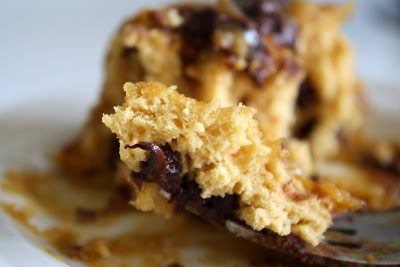 I can’t seem to get a grip on the matter, so I’m passing it off to you. Pretty please, go hang out in your kitchen for two minutes, make a cake, and then report back here so we can talk about this microwave baking phenomenon, will you? It’s all for the noble sake of science (and my insatiable curiosity).

Thank you, darlings. I’m much obliged. 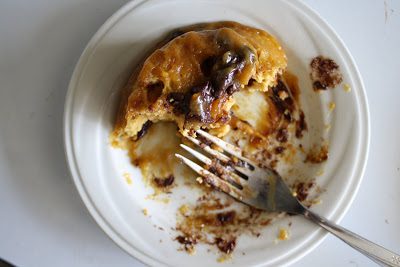 Adapted from Dinner with Julie and Back To Her Roots

This is supposed to make one serving, but I think it should be divided between two small ramekins, or maybe even three.

Dump all ingredients into a cereal bowl and stir with a fork. Dump into a greased ramekin and “bake” (zap, nuke…) in the microwave for 30 to 60 seconds. Invert onto a plate and top with a scoop of ice cream or some whipped cream.

Eat and report back. Thanks.

After multiple experiments and reading through your comments, I’ve come up with the perfect recipe. It is GOOD! The recipe is as follows: 2 tablespoons beaten egg, 2 tablespoons peanut butter, 1 tablespoon flour, 1 tablespoon brown sugar, 1/4 teaspoon baking powder, and 1/3 cup chocolate chips. Divide the batter between two small, greased ramekins and microwave on high for 30 seconds.