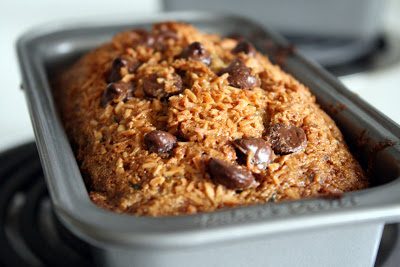 Or, perhaps you don’t care. Perhaps you hate zucchini. Perhaps you never even look at the recipe index or, horror of horrors, know it’s there.

However, after I get done with this post, there will be a zucchini bread recipe in the index because I have found my dream zucchini bread, glory be!

Zucchini bread has been the bane of my July zucchini-eating existence. Every summer I dig through my files and try to find one that I like. But because I never take notes (because they’re not that note-worthy), I never remember which one it is that I’d like to make, so I hem and haw around, make several kinds of bread and stick them in the freezer and then leave them there. Not because we don’t like zucchini bread, because we do, but because the breads are always rather unmemorable. Just, you know, plain old zucchini bread. Bah humbug, let’s make scones.

This year I made two new kinds of bread. The blueberry zucchini bread was good but it didn’t inspire any kitchen jigging. The lemon rosemary zucchini bread was more savory and quite fine, but again, no jigging. (Mr. Handsome and I both agreed it’d be improved by a hot lemon syrup baptism.) And that was the end my zucchini bread making experimentation ’cause my plants keeled over and I switched from get-‘em-used-up-now mode to the-precious-few-zucchinis-in-my-crisper-must-not-be-squandered mode.

And then, kind of out of the blue and thanks to the Fresh Air Fund (how random is that?), I got served the zucchini bread I’ve been looking for all these years.

Here’s how it came about.

Saturday morning I got a call from a prospective host family. “Is it too late to sign up?” the mom asked.

“No, no, no!” I assured her. “The program desperately needs more families—they have something like 900 kids on their waiting list—and you still have a couple weeks before the next trip. But we need to do the interview as soon as possible so we can get the paperwork in.”

And so it was that I found myself sitting at her dinning room table that very afternoon, enjoying the view of the valley through the large, open windows, listening to her mother tell stories of the Fresh Air children they had when she was little (“We had a boy named Enry-kay.” “Enry-kay?” “Yes, E-N-R-I-Q-U-E.” “Mom! That’s EnRIque! Oh my goodness, Enry-kay! The poor kid!”), a plate of freshly baked zucchini bread sitting temptingly directly in front of me.

I only had one piece because I can not pretend to be semi-professional and eat at the same time, but I was fully aware of what I was eating. There was definitely some whole grain in it, and the bit of chocolate, just on the top and all melty and soft, was quite lovely. There was toasted coconut, too, and I was pretty sure that it also was just a topping. I contemplated asking for the recipe but restrained myself. Perhaps random recipe requesting wasn’t what normal people did? I certainly didn’t want to appear more discombobulated and weird than I was already (quite naturally) acting. So I kept my mouth shut, collected the paperwork, and took my leave.

Less than 24 hours later, I caved. I had to call the family back with a couple questions about their references, and at the end of the phone conversation I piped up with, “And one more thing—it’s kind of an odd request—but may I have your zucchini bread recipe?”

“Of course!” she said cheerfully. “There’s really nothing fancy about it—”

“But there’s some whole grain in it, right?”

“Oh yes, I use all whole wheat—I grind my own. It still calls for a lot of oil, but I cut back on that and it turns out fine.”

She promptly emailed me the recipe and today I made it. 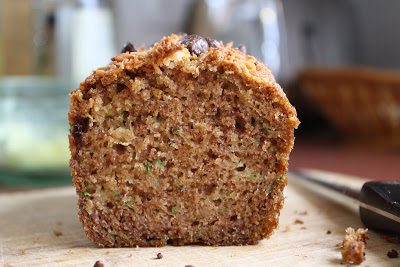 And now there is a zucchini bread recipe in my recipe index. 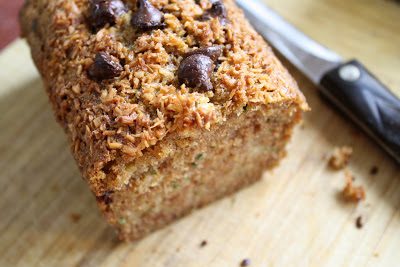 I’m not a fan of chocolate chips in my zucchini bread, but they are delicious as a topping. I sprinkled just a few on my loaves before baking, but next time I’ll do more (just down the center top for the trough-of-molten-chocolate effect) and kind of press them into the batter a little—my chips stayed on top and pop off when I slice the loaves.

In the oven the coconut gets toasty brown which makes for one heck of a fabulously crunchy topping. Do not neglect this step. (You can add nuts to the topping, too, but I did not. I think a some walnuts or pecans would make an German frosting-type topping.)

Note from July 2, 2014: Today I under-baked a double batch. The edges were pulling away from the pan, the top of the loaves were nicely browned, and the toothpick came out clean. However, the inside of the bread is still dense and soggy. The take-away? Bake these another 5-10 minutes after you first think they are done. The bread is in no danger of drying out. In fact, it needs to.

Note from June 27, 2015: One recipe fits perfectly in a 9-inch springform pan. Sprinkle the top liberally with chocolate chips and then a lot of coconut. Bake at 350 degrees for 60-70 minutes.

Stir together the first six ingredients. In a separate bowl, beat the eggs and add the oil and vanilla. Stir the wet ingredients into the dry and add the zucchini.

Divide the batter between 4 small, greased loaf pans (or 2 regular-sized). Sprinkle a row of chocolate chips down the center of each loaf, pressing the chips into the dough just a little. Sprinkle the loaves with the coconut (all over, not just the center). Bake the loaves at 375 degrees for 30-40 minutes (or, for the large loaves, close to an hour). Cool for ten minutes before running a knife around the edge of the pans and inverting the loaves onto a cooling rack.

To freeze, wrap each loaf in plastic before placing in another plastic bag and transferring to the freezer.