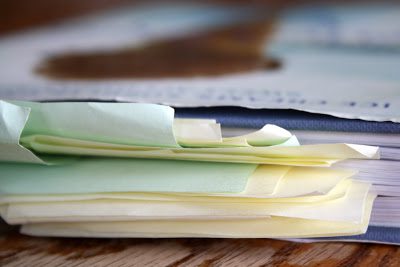 I can not keep it from you any longer: it is time I tell you what I did with those six egg yolks I had leftover after making the mint wedding cake.

Really, I had no plan for them … at first. I plopped them in a little plastic container and slipped them onto the top shelf of the fridge. Later, when I opened the fridge later Somethingorother, I spied them, paused in my mad dash, focused my full attention on yolks and applied all my mental energy to the task of coming up with a use for those six golden orbs. I actually felt the heavy clanking wheels in my brain heave forward. ICE CREAM flitted across my mind, the wheels ground to a halt, I grabbed the Somethingorother, and moved on.

In the intervening hours between when I decided on the ice cream and when I made the ice cream, I pulled my David Lebovitz ice cream book—it bristles with sticky notes—off the shelf and rifled its pages.

I didn’t have to look for long; the very first sticky-noted page caught my eye. 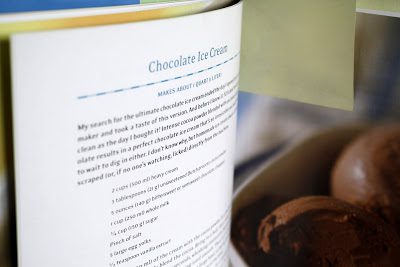 I like chocolate ice cream well enough, but I’ve never made a chocolate ice cream that I was proud of. David’s chocolate ice cream looked fair enough. Perhaps a little more convoluted than some of the more straightforward recipes I’ve tried, what with both powdered and bar chocolate and a bunch of egg yolks, but a bit o’ convolution is good when you’re searching for a better than average recipe. (Now that I’m looking at the recipe again, I see that it calls for only five yolks. This confuses me. Did I unwittingly add six? Or did I do something with the other yolk that I can not, for the life of me, now remember? Hmmm, it’s a mystery.)

Making this ice cream made for some crazy-fun times. The textures and tastes thrilled me to the tips of my toes. My heart raced, my adrenaline pumped, and I giggled and laughed, cackled and crowed. I even cornered my children and made them eat samples. (For once, they didn’t argue with me.)

After boiling the cream with the cocoa powder and pumping it full with chopped chocolate, I peered into the saucepan full of thick chocolate sauce and saw it for what it was: a heck of a lot of ganache. I think it was at this point that I started smiling. Clearly, I was heading down the right track. 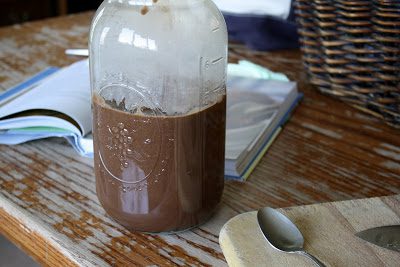 The warm ice cream base was out-of-this-world good. Creamy and smooth, it slipped down my throat with alarming ease. Or I would’ve been alarmed if I hadn’t been in the midst of one of the most fabulous chocolate-induced stupors of my life. The ice cream base was exactly what I imagine the chocolate river in Willy Wonka’s factory to taste like. I had planned to kick up the chocolate factor with a generous handful of cacao nibs, but it was at this point that I decided that there was no way I was pebbling its sexy sleekness with anything nibbly. 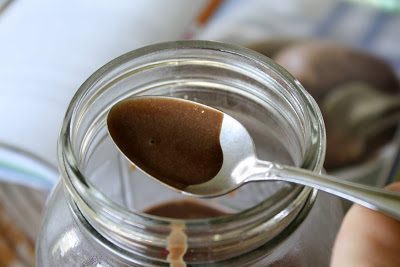 Once chilled, the mixture set up into the consistency of a thin pudding. I forced myself to do a bunch of taste testings so I could be sure my “thin pudding” description was accurate. It was. 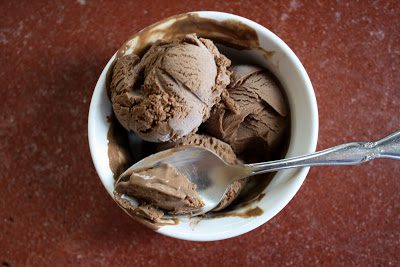 And then I churned the ice cream. (Or, I should say, my super-duper Mother’s Day gift from last year, this splendiforous ice cream maker, churned my ice cream.) Straight from the machine, the ice cream was Class-A Soft Serve. (No pics, night had fallen thunk.) And after a sleep in the freezer it was Class-A Hand Dipped (set it out for 10 minutes to soften a little prior to scooping).

Funny story: one night after my stand-at-the-counter-and-eat-straight-from-the-ice cream-container session, I put the ice cream away. Or so I thought. The next morning I found a container of chocolate pudding sitting all pretty-like on the top shelf of the fridge. I shrieked wildly, put it in the freezer, and several hours later it was ice cream again. Moral of the story: this ice cream has endurance. 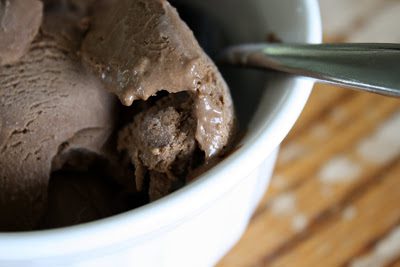 Put one cup of cream and the cocoa powder in a pan and bring it to a boil, whisking steadily. Remove from the heat and add the semisweet chocolate and stir till smooth. Stir in the remaining cream. Pour the mixture into a large bowl.

Wash out the pan and measure in the milk, sugar, and salt. Heat it till warm but not boiling. In the meantime, but the egg yolks in another bowl. When the milk is hot, use it to temper the yolks. Pour the tempered yolks back into the pan and heat the mixture, stirring constantly, until it has thickened a little. Pour the custard through a strainer into the bowl of chocolate. Add the vanilla. Thoroughly chill the mixture (it will get quite thick) before churning.