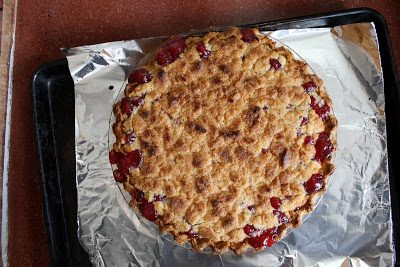 Before any more time elapses, I must tell you about the other cherry pie I made. There was the first one, of course. The double-crusted, cinnamon-spiked, tapioca-thickened one, and it was a real work of delicious art.

But then somewhere I saw a link to Ruth Reichl’s blog and I thought, Huh? You mean Ruth keeps a blog? Well I’ll be a monkey’s uncle, and so I clicked over there fast as a wink, and sure enough, Ruth’s explosive hair and unflappable charm popped up right there on my computer screen. Of course I immediately signed up to get her posts. I miss the woman’s monthly columns in Gourmet—unlike other editors, she often wrote of deeper things than just the thrust of the current magazine.

As I scrolled down through her posts, I happened upon her recipe for a sour cherry pie. Apparently it’s her tradition to make a sour cherry dessert at the start of each new year. (Isn’t that sweet?) Her recipe was written simply, in paragraph form, and I quick jotted down notes and then hustle-rustled us up some pie.

I’ll be honest—(that’s a stupid-upid-upid thing to say—I’m always honest, of course)—at first I thought it wasn’t going to work. The cherries disintegrated mightily while they were thickening on the stove top, and my blind baked crust (from one of my recipes, not hers) baked up into a piece of lace, a buttery web of holes. But the part I was most worried about was the crumb topping—a stick of butter, melted, and a three-quarter cup each of flour and sugar that, when mixed, more closely resembled a sandy sludge than crumbs. But I forged ahead, sprinkling the paste in the best crumb-like fashion I could muster. It was a lot of crumbs, and they ended up forming a lid over nearly all the cherries. 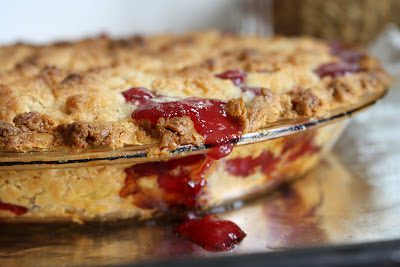 And you know what? I never should’ve doubted those crumbs, let alone Ruth. (Who did I think I was anyway? A gourmet cook? Ha.) Those crumbs were fabulous! In the hot oven they transformed into a thick, hard lid that shattered like a sheet of ice when the knife hacked through. Crunchy and buttery-sweet, the crumbs were the perfect foil for the soft, tart cherries. I couldn’t keep my hands off the crumb shards. I kept plucking off the edge pieces and popping them into my mouth, yum-yum. 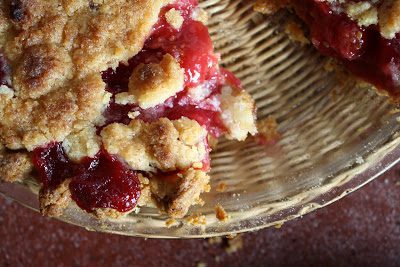 Of course the crumbs’ underbellies softened a little by the next day. My mom has fits about this. She thinks soggy crumbs are the end of the world and so refuses to make crumb toppings for pies that aren’t going to be served that same day. I agree with her—crumb pies are best on the day they’re made (aren’t all pies?)—but while these crumbs did get a little soft, they certainly weren’t bad, and it definitely wasn’t the end of the world. (Mom, you gotta calm down, okay?) The bottom line: plan to eat this pie the same day you make it and then be thrilled if there are any leftovers. 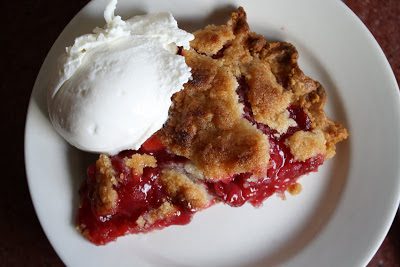 To blind bake a crust: line a pie pan with the crust, crimp it, and prick it with a fork. (If you’re worried about your pastry holding its shape in the oven, you can line it with foil, and then fill the bottom of the pie with dried beans. Also, sometimes it helps to stick the shaped crust in the freezer for half an hour immediately before baking.) Bake it at 400 degrees for however long it takes to get just a little brown—10-20 minutes.

I used my cream cheese pastry, and while the flavor was superb, the pastry didn’t have enough structure to hold up to a blind baking. Next time I’ll use a regular butter pastry.

Melt the butter in a heavy-bottomed saucepan and add the cherries (and juice, if any) and sugar. Stir a couple times, and as soon as the cherries have thawed (this will happen quickly), add the lemon juice and salt. Make a paste with the cornstarch and water and add it to the cherries. Bring the sauce to a boil, stirring frequently. Once the filling is thick and clear—after a couple minutes—remove the pan from the heat.

In another bowl, melt the butter and stir in the sugar and flour. Set aside

Pour the cherries into the pie shell, and top with the slurry-like crumbs. Place the pie on a foil-lined baking sheet (the cherries are bound to bubble over) and bake the pie at 375 degrees for about forty minutes. Both the crust and crumbs should be golden brown and the cherries will be bubbling madly.

Allow the pie to cool for about four hours before serving.

(I just realized that I said “of course” four—4!!!—times in this post. Whoa, dude. Maybe I gotta calm down.)